After a total mess, that was Fallout 76 which was full of bugs, glitches and invisible enemies, The outer worlds came as a big surprise and a breath of Fresh Air. RPG games, especially good RPG games take time and a lot of work hours to be made into a Semi perfect/ perfect game. This is a perfect example of such a game.

Obsidian did not only deliver its best RPG of all time but also showed other developers as to how RPGs should be made. They are also behind some of the best Role-playing games including  Fallout: New Vegas and Alpha Protocol.

Deep individual character emotions, amazing exploration, different deep choices leading to even different choices. Today, I will be giving my full in-depth review of The Outer Worlds and share my wholesome experience playing it.

The game starts off with a scientist (wanted fugitive of halcyon) who is trying to bring your custom character back to life who has been asleep for 70 years in the hypersleep chambers and after a while has been successful in waking you up. You are in a colonial spaceship way deep in space and you have been awakened to save Halcyon which is a solar system in which the game takes place and is far away from Earth in the frontier of the colonized galaxy and is the target of development projects by massive corporate conglomerates. In order for Halcyon to survive, the scientist would need some resources, the reason why he has awakened you so that you can help him get those resources on time. Since this is a spoiler-free review, ill refrain from going further as you should definitely experience it for yourself. 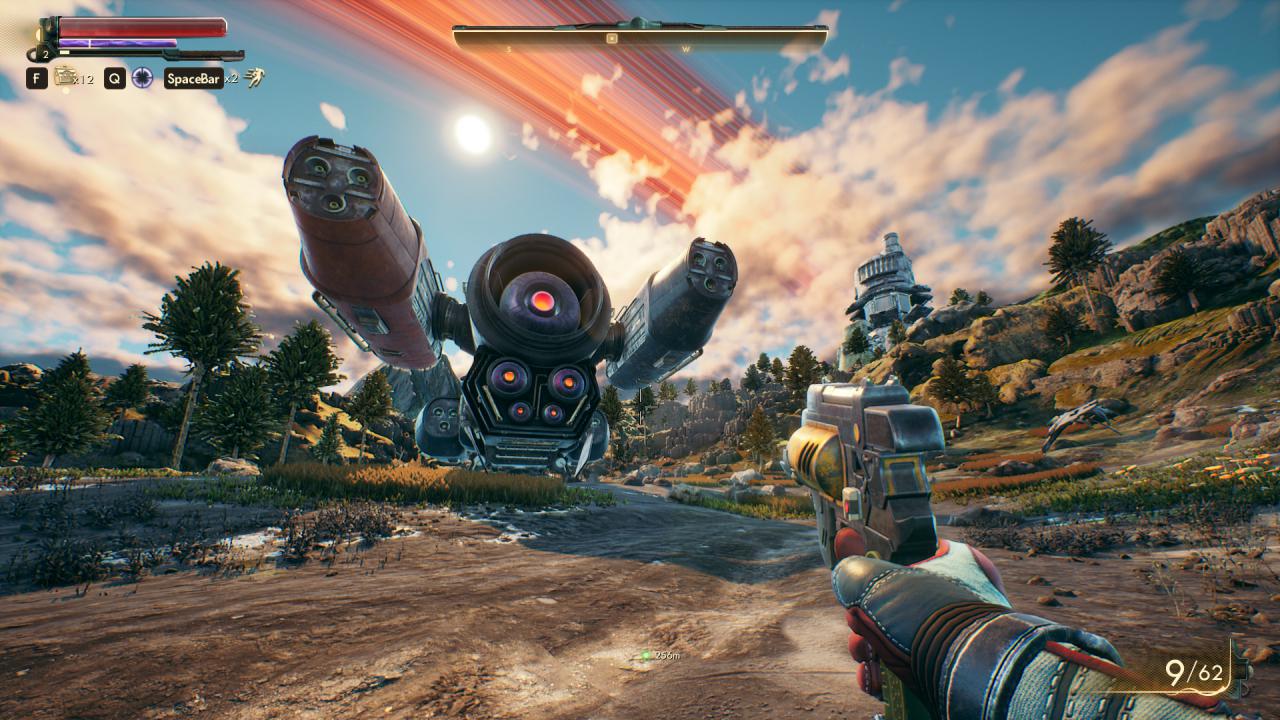 After the first cutscene, you are greeted with the character customization screen as it is with the other RPG games as well. Here you will be able to customize your character to your liking whether he/she will have a good melee/ranged damage or be an intelligent being capable of lying or manipulating people or be absolutely dumb and just go across locations creating havoc everywhere. The decision is solely in your own hands, and this is exactly what makes this game replayable for more than two to three times with multiple playthroughs, dialogues, an extension of even deeper character narrations and new quests.

These skills which you will be acquiring can be individually leveled up later in the game after you have crossed 50 in each of their main groups. This is something really refreshing to see and provides even deeper character customization down to the final moments of the game which is fully dependent on how you level up your characters. 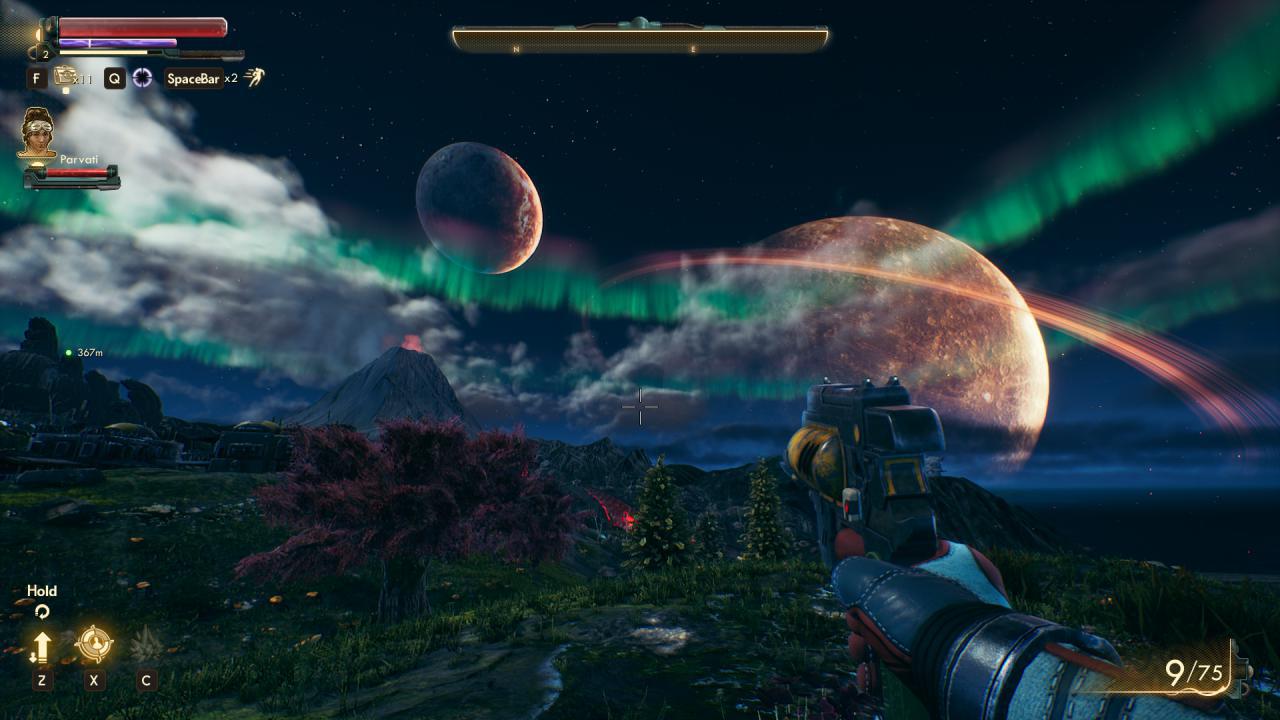 In each new location, there are different quests, side quests, companion quests, and other favors as well. Outer worlds do not have a coop or any kind of multiplayer linked to it but have the companion system where you can make a new companion on your journey by meeting new characters and can recruit them by selecting proper dialogues.

Coming to the gunplay, the mechanics have been inspired by fallout New Vegas and have been further improved upon as well. The gun sounds, recoil, customizations, inventory management, different scales of melee and ranged weapons are all unique to this game.

There is a certain kind of weight added to the weapons that you would feel when you equip them, be it pistols or shotguns or assault rifles or even the machine gun (both light and heavy weapons). All the different weapons have full and proper details to them and nothing was left unfinished in this process. Different kinds of melee include a blast from the past weapons from different games and also have some unique weapons as well termed as science weapons. 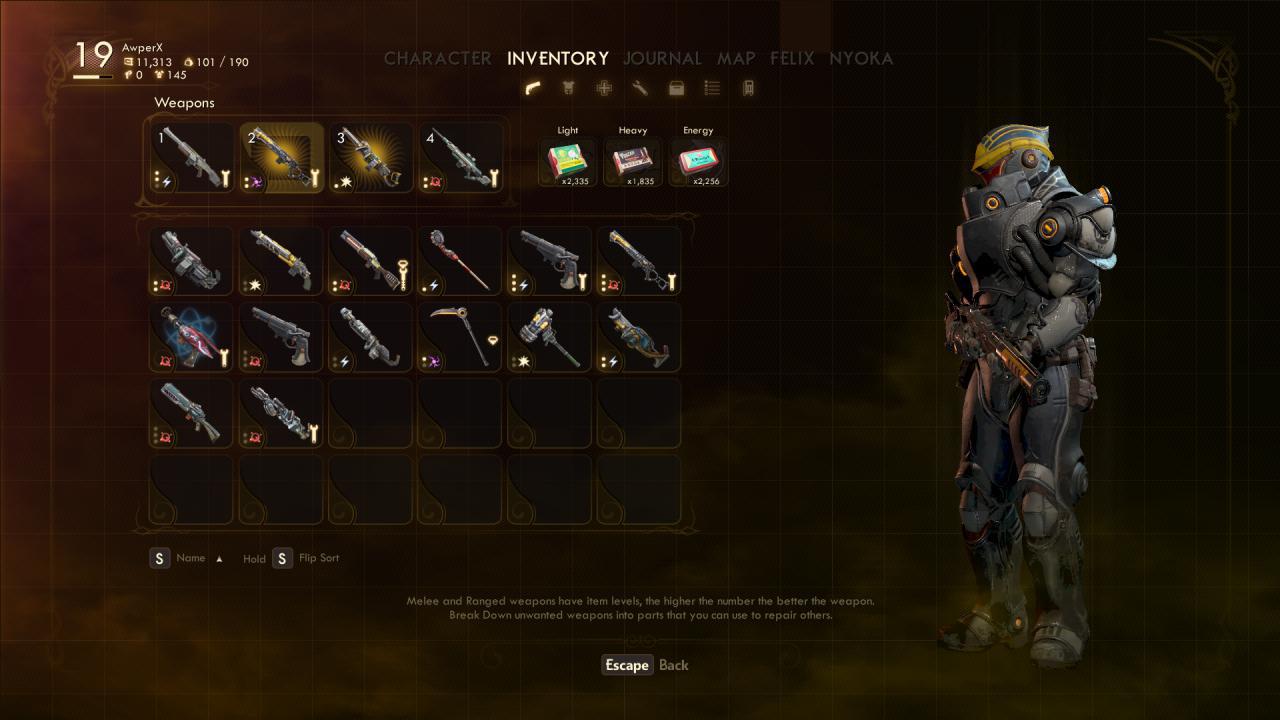 Every time you level up, you receive 10 points which you can appoint to whichever group/category you feel like giving to. Be very careful about what you select, as this definitely affects your gameplay and how other characters perceive you in the outer worlds. After that, we have the inventory tab where weapons can be swapped to shortcuts and armor/helmets can be changed to provide better defense which you can acquire by exploring or simply killing people off and looting them or finishing quests. 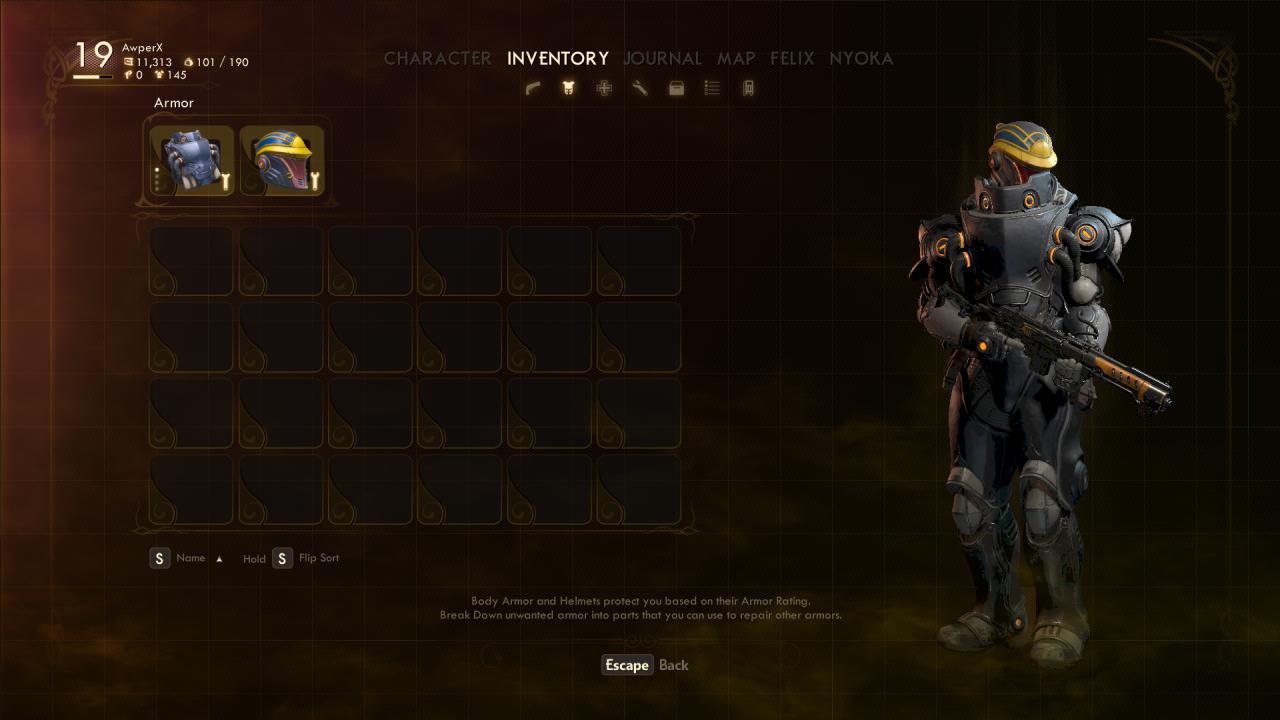 Your companions also have their own inventories which you will be managing. They come with their own unique signature weapons such as light machine guns or flamethrowers but you can help them help u in combat by giving them something better from your own inventory. This helps a lot, especially while during fights, your companion has certain special attacks that can be equipped after leveling up specific talents and unlocking them. 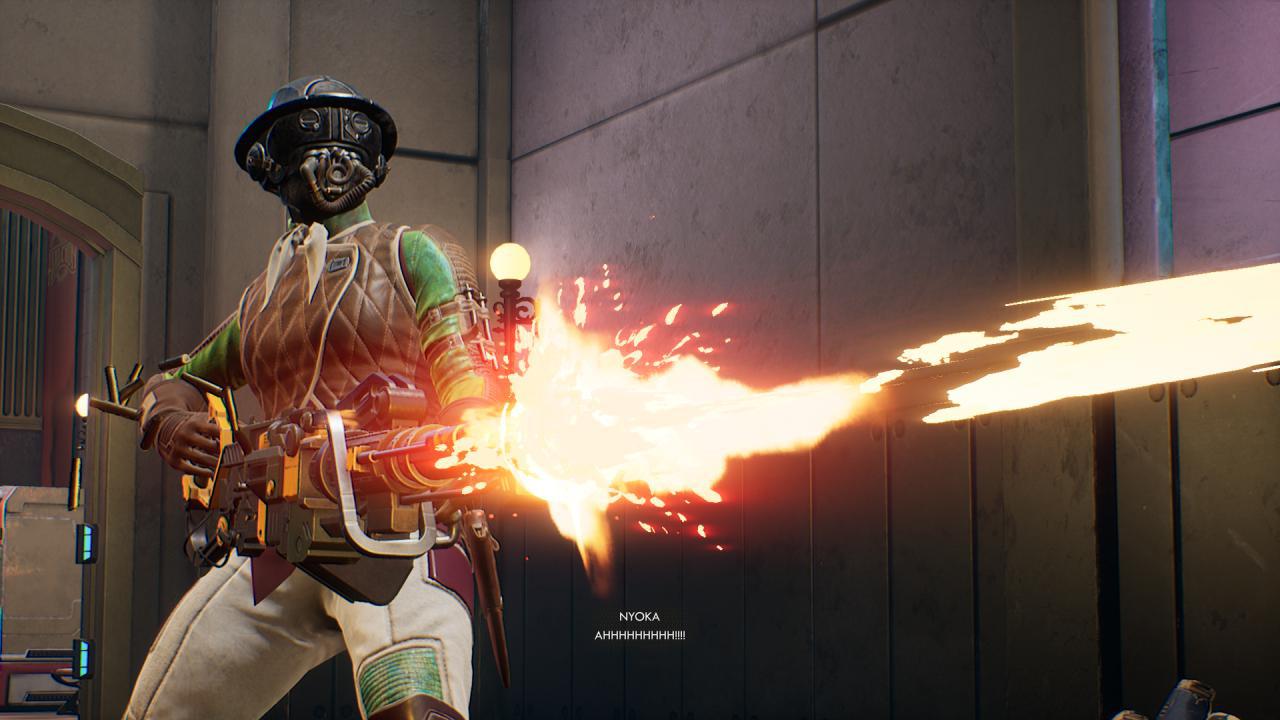 Side quests in this game are not boring and non-repetitive as this lets you travel to different places and get to know different areas all around halcyon. Among these, companion quests have personally been the best for me. After the main side quests, I highly recommend you do companion quests even if you are someone who would want to rush the main quests, just don’t. The companion quests offer the best insight on your companions and their reaction to certain new characters and new dialogue unlocks after you finish every quest. They also start to give their own opinions in between your main quests and they start even judging you sometimes if they feel what you are doing is wrong or right depending on which companion you have selected.

At a time, you can have no more than 2 companions with you so select them accordingly when you are trying to do the companion quests. Their insights will help you often in times where you would definitely need some kind of guidance or help in your decision making.

The outer worlds ran fine on my PC with GTX 1070 Amp extreme and an i5 6600k with 16gb ram at 2666mhz at 80-90 fps on very high and 100+Fps on high settings. The only issue I came across was there were few low-quality textures on some of the areas of the game which I felt could have been rectified before pushing out this game along with a native photo mode.

The best part about the Outer worlds is in its level design. All the different locations in the Halcyon solar system are just spectacular. The attention to detail given to all the different places adds up to its very own theme and cultivation. Every location is different, some have space stations, some are just polluted with the capitalistic characters along with the fauna of the entire location giving them their own personality, 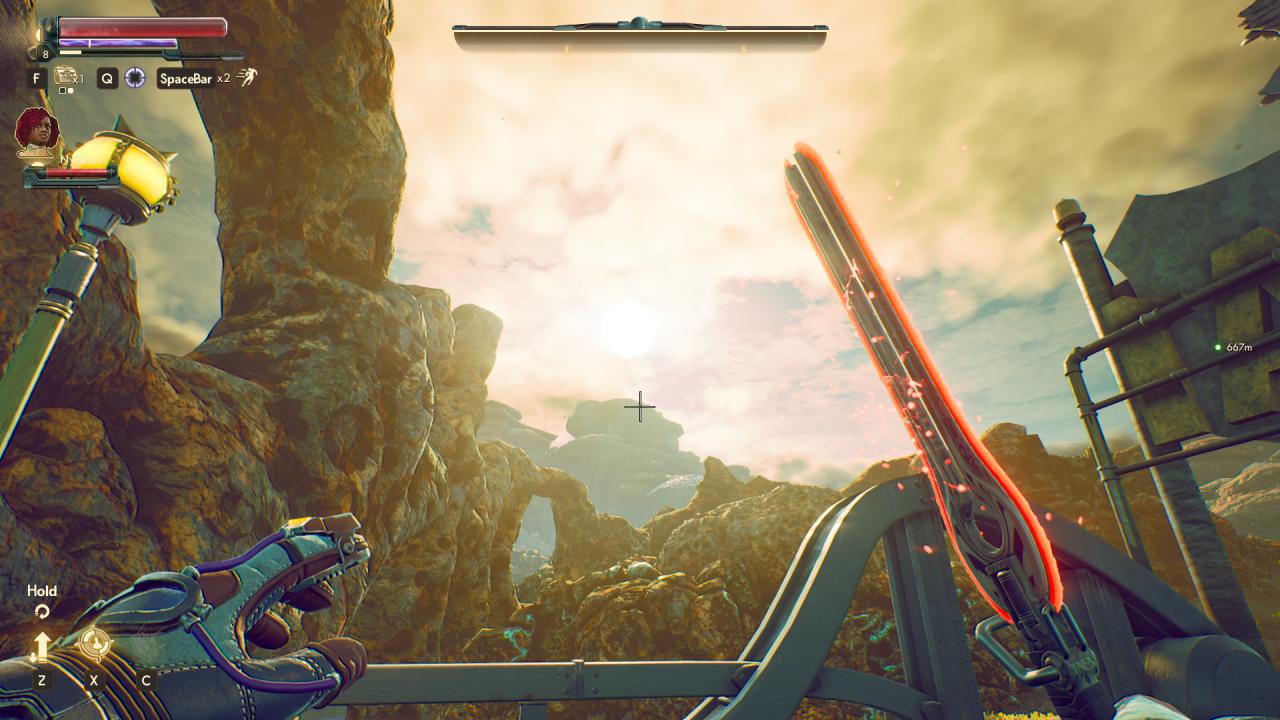 From the different terrains to the vegetation to the scattered wildlife present all around, each and every location feels and looks completely different. Some places are challenging while some are easy to pass through but often have certain obstacles/ dialogues which is hard to pass through. Unless you have full levels on your speech, you won’t be able to pass through heavily guarded areas, not unless you are bribing a good amount to the guards outside the building. In these situations, Lying, persuasion comes into effect and with its help, you can ease through even the most difficult obstacles easily without breaking a sweat. 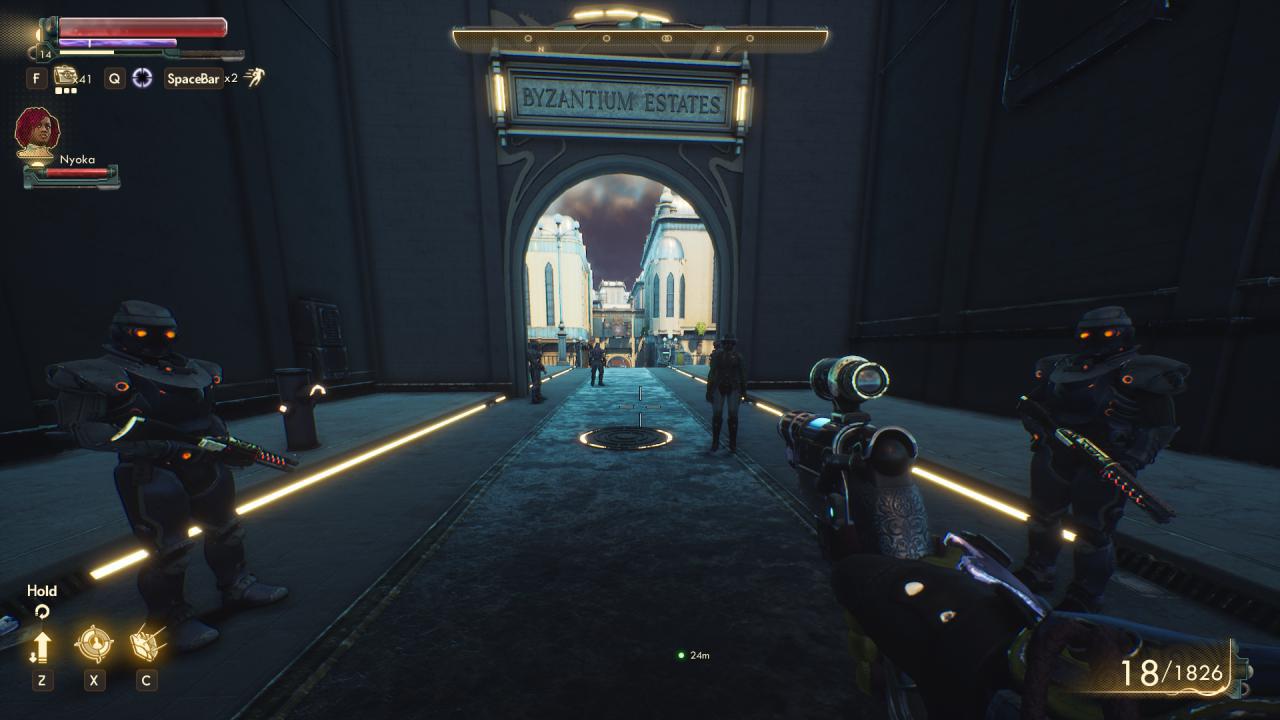 As I mentioned previously how beautiful this game looks, no matter where you are, you would feel like standing silently and take screenshots throughout your journey and this is why I think they should have included photo mode which they did not. I am sure they would come up with photo mode really soon in the future patches/updates. Without photo mode, it’s very hard for me to show you exactly what I want to show you in the first place.

This cave, for example, looks amazing with the natural light coming from the broken structures of the terrain and lighting the whole place up. The game itself is very colorful and always keeps reminding you of Fallout New Vegas. There are many such places in this game where you will just stop moving around and just stand there and gaze upon the whole field over how beautiful it just looks. 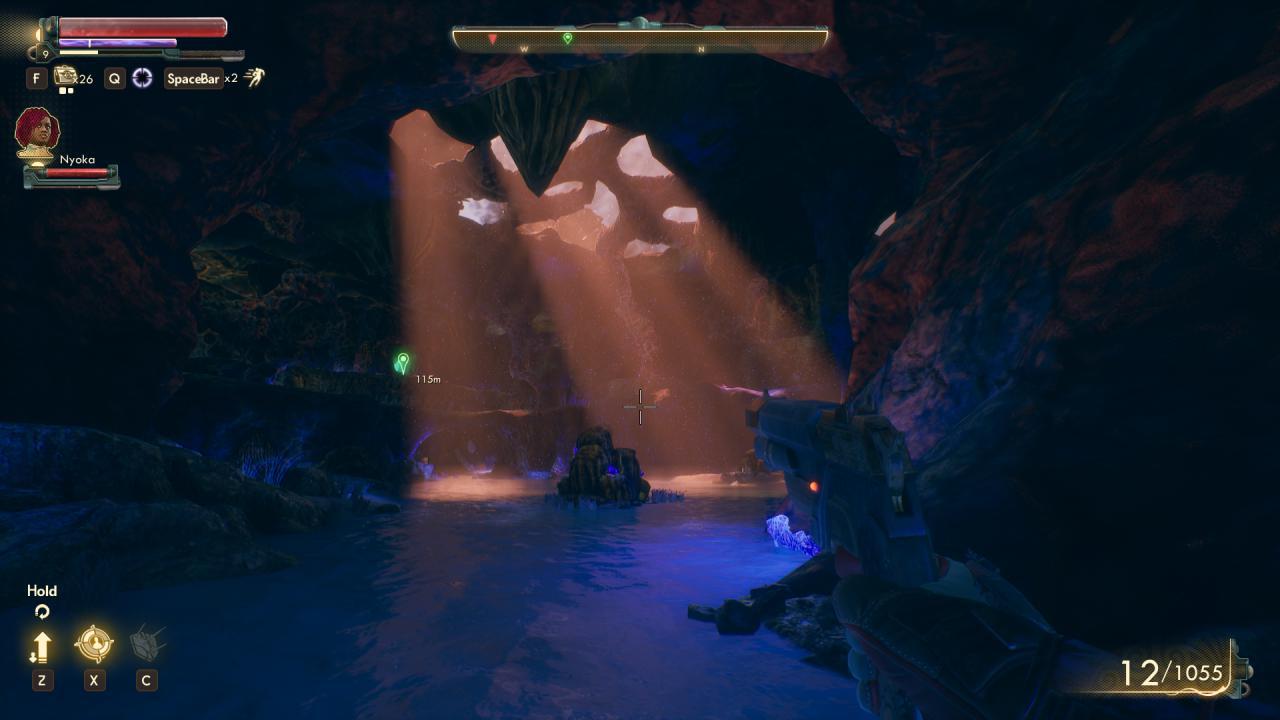 There are certain locations that actually look like its ahead of its time with very minute details to the surrounding structures. 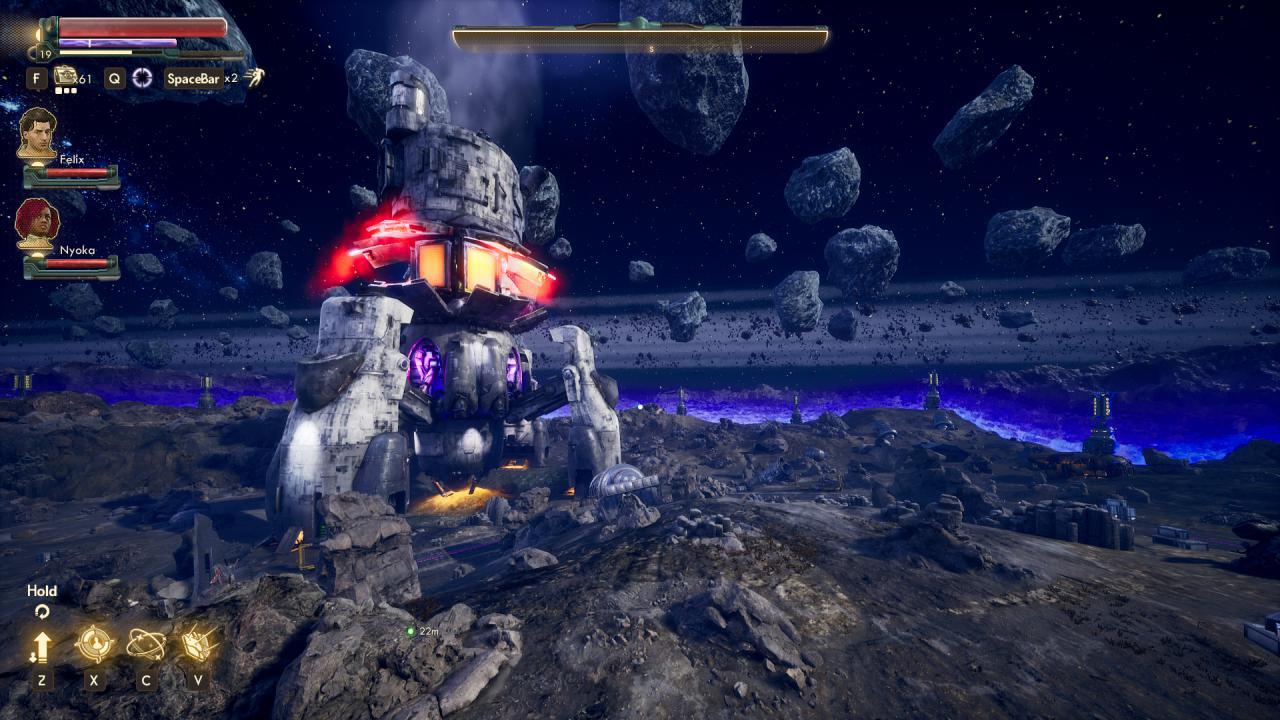 This game would have completely been a hit Or Miss if it wasn’t for the dialogues/character development/Narration. The whole reason why this game is being praised so dearly is because of its writing and the dialogues and also the extension of the dialogues after a dialogue. Yeah, I know how it sounds but you need to play the game to understand what I am talking about exactly. 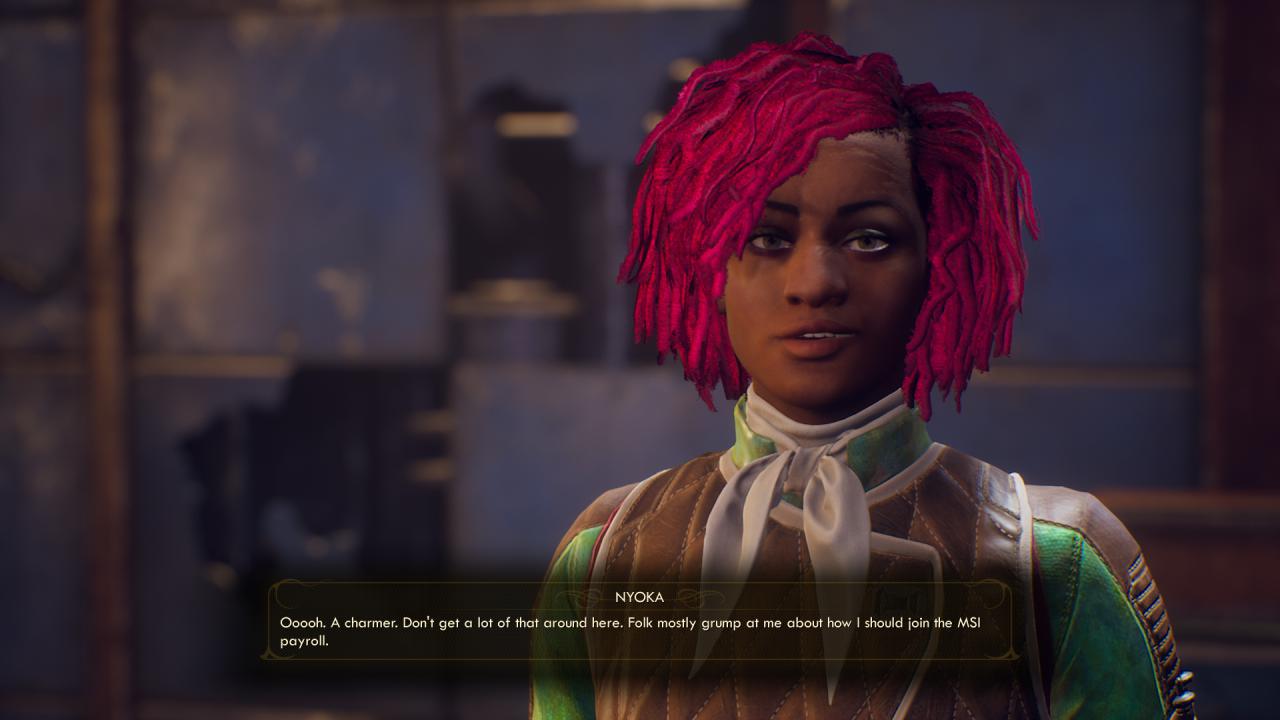 Each and every character in this game have their own voice and feelings/emotions and have their own persona. This is exactly why I love this game so much is cause every one feels very real to me. Whenever I am roaming around with my companions, they would often start talking among themselves as to what she/he thinks about a specific topic and why was a certain action was taken by them for the same thing. When you are on your ship, you would see your companions arguing among themselves as well as to what should be done for a certain specific character.

These things actually together make a lot of difference in RPG games, cause they provide a lot of reality in these custom characters and give them a heart, a soul, their own brains. Often you would stand and start talking to a random stranger and would try to change their opinion with yours if you have high enough talent trees to perform such specific actions. 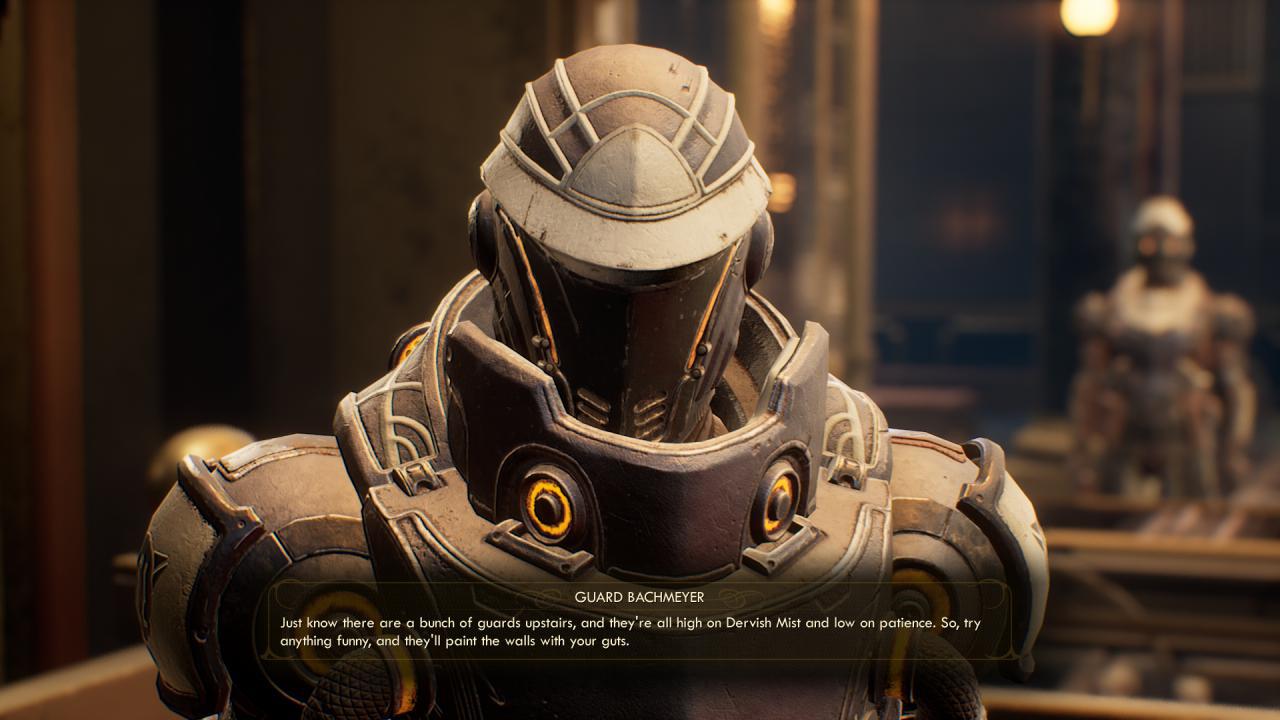 Overall, I have lots of fun in the outer world. The outer worlds came as a surprise to all the people who have been praising so dearly and also have been considered as one of the best games of this year and have also entered the game of the year category as well. I would highly recommend all the RPG fans to play this game and also those who do not like RPG anyways. This game is a perfect way of entering into the RPG ecosystem and familiarizing yourself with most aspects of what makes a good RPG game.