While February turned out to be a month churning out excellent games with a lot of diversity, one of the releases that captivated our attention ever since the announcement of next-gen consoles was the sequel of Horizon Zero Dawn. And we all know how sequels can be, whether it’s in terms of movies or games. There is a challenge to live up to the expectations set in the minds of people who have played the predecessors, while, at the same time, it has to build upon the past and improve so that people can recognize it as a separate identity. Very few manage to do that and let me tell you right off the bat, Horizon Forbidden West is definitely one such game. It’s a beauty that ticks off mostly all the right boxes, and the few left unchecked are vastly outnumbered by the ones that are. 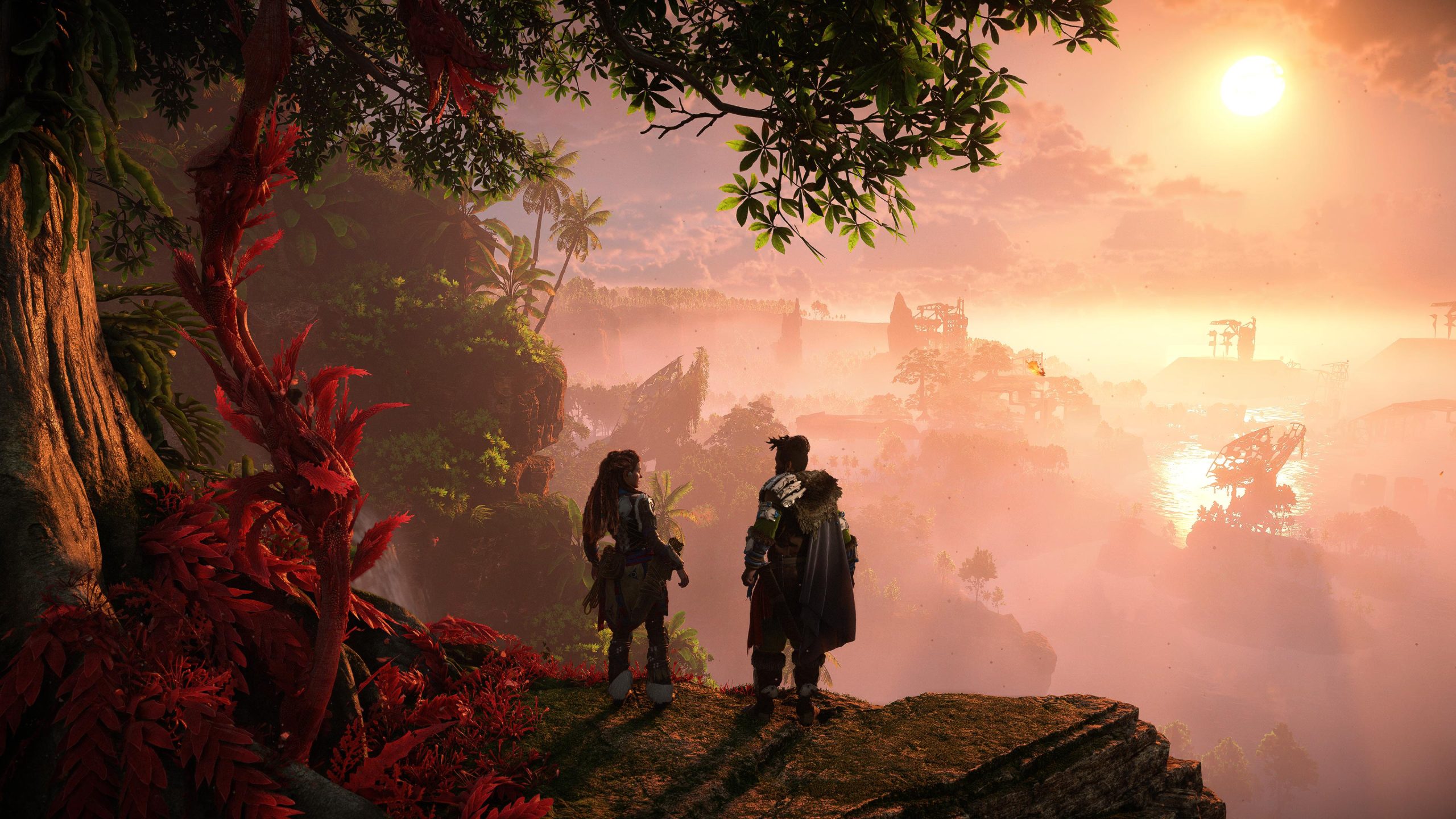 Forbidden West picks up right from where Zero Dawn ended. In a post-apocalyptic world where Earth had seen the extinction of life as we know it, a series of computer programs left over by the previous generation has led to the birth of a strange new world where humanity coexists with fascinating machines amidst the ruins of their forefathers. 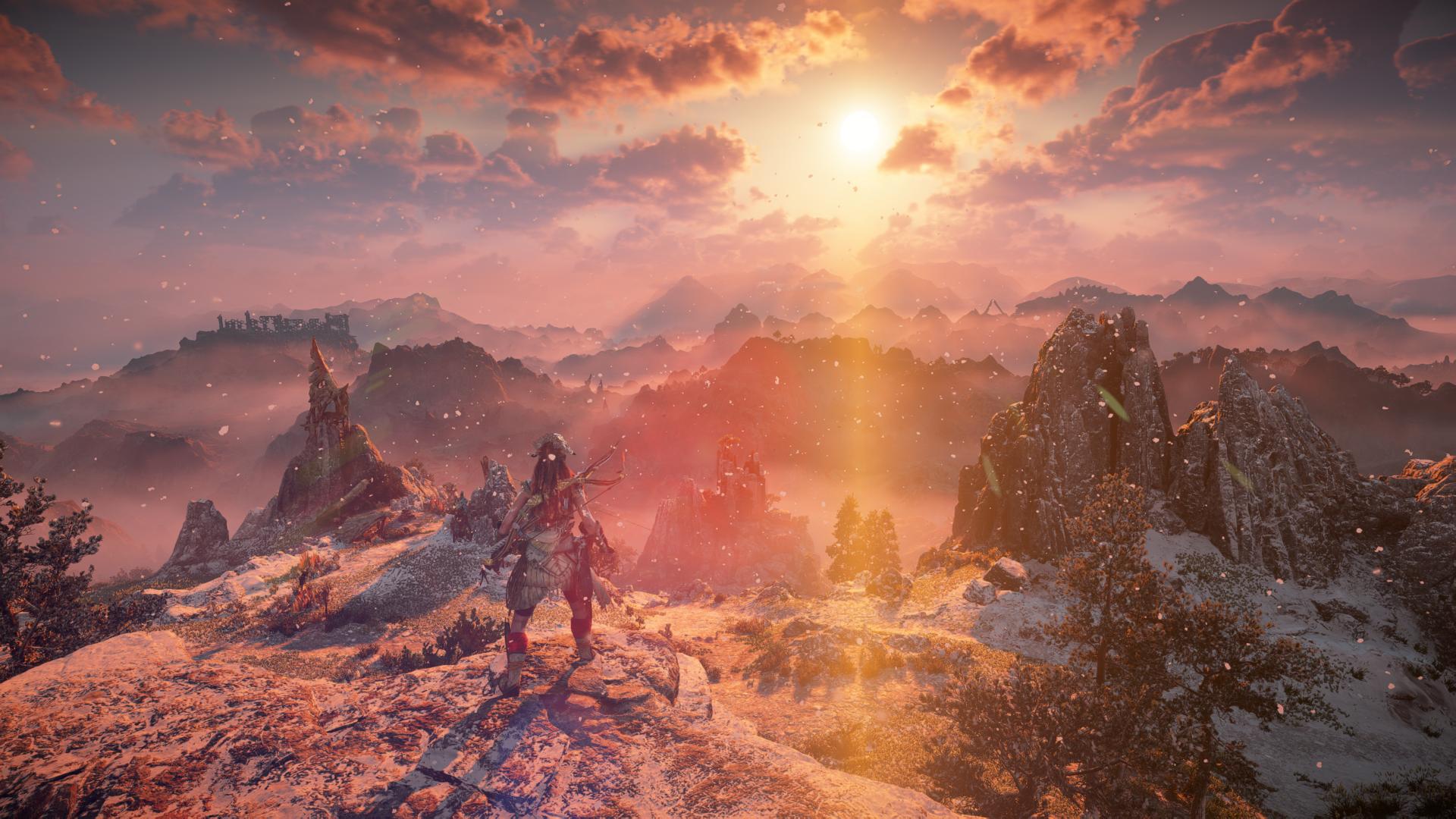 The story follows the adventures of Aloy who is out on a mission to save the entire planet from imminent destruction. The software is designed to maintain life on Earth has started to fail and Aloy, being a clone of the one who created them all, is the only person who can reactivate them. After the events of Zero Dawn, the game shows Aloy on her mission to find GAIA in the Forbidden Waste, a vast stretch of land ruled by ferocious, warring tribes and populated by strange new creatures.

The plot is quite intriguing, and even though the start is a bit slow, the story turns out to be quite good gradually with lots of interesting characters. The missions are quite diverse and range from fighting rebel Tanakths (the native of the West) to climbing up vast mountains and delving into large ruins in the hopes of finding salvation. Newcomers to the series are advised to play the previous game first though, as it would help them to find context and without which, they might find themselves a bit lost. 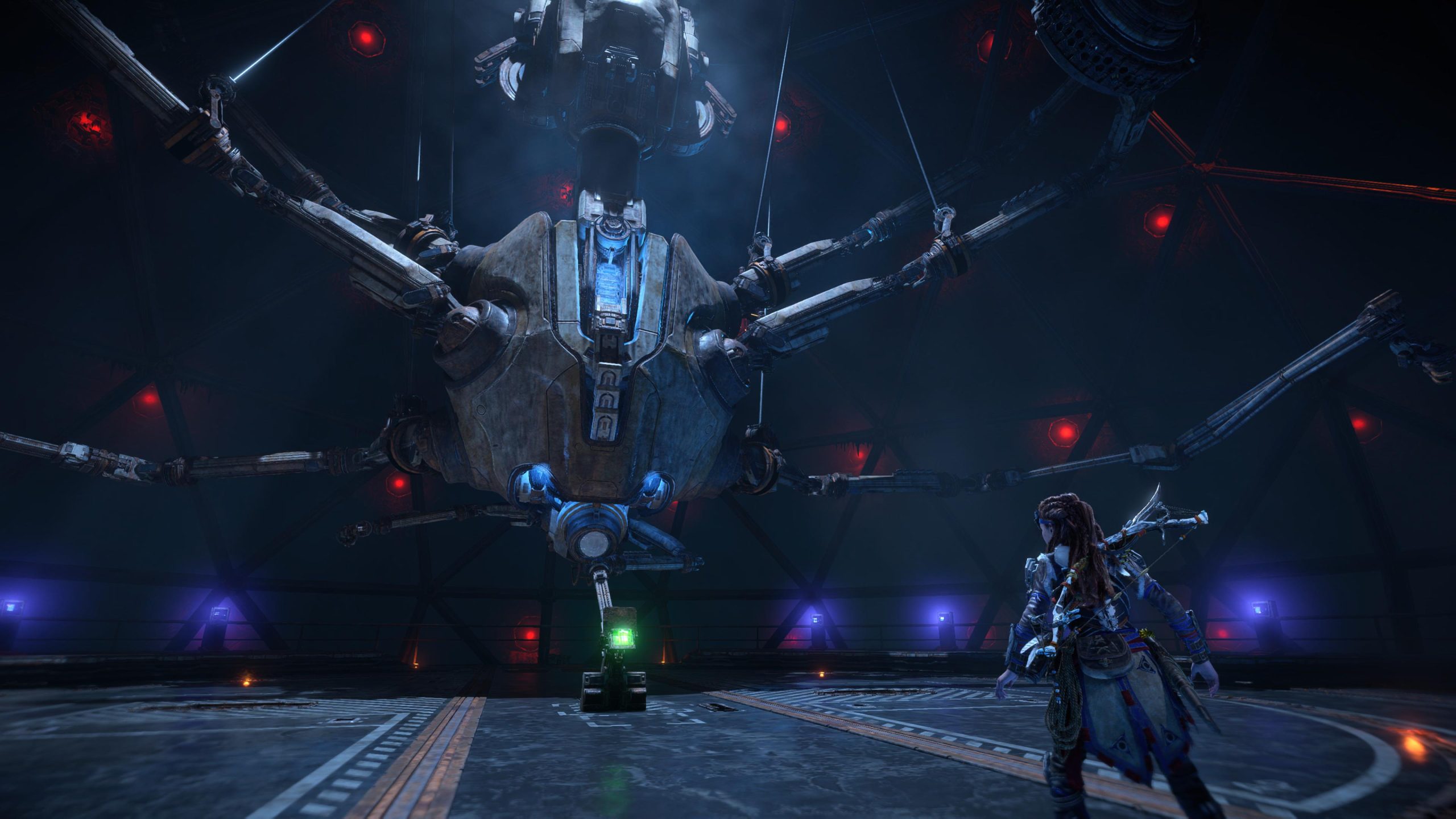 Side quests are plentiful and a lot of them are way more important than in the previous installment. We find ourselves going on the trail of the Eclipse once more, defending innocent citizens from alleged crimes, putting down local ganglords and what-not. A lot of them have large cutscenes dedicated to them, and they each tell small stories of their own, some of which are quite fascinating. 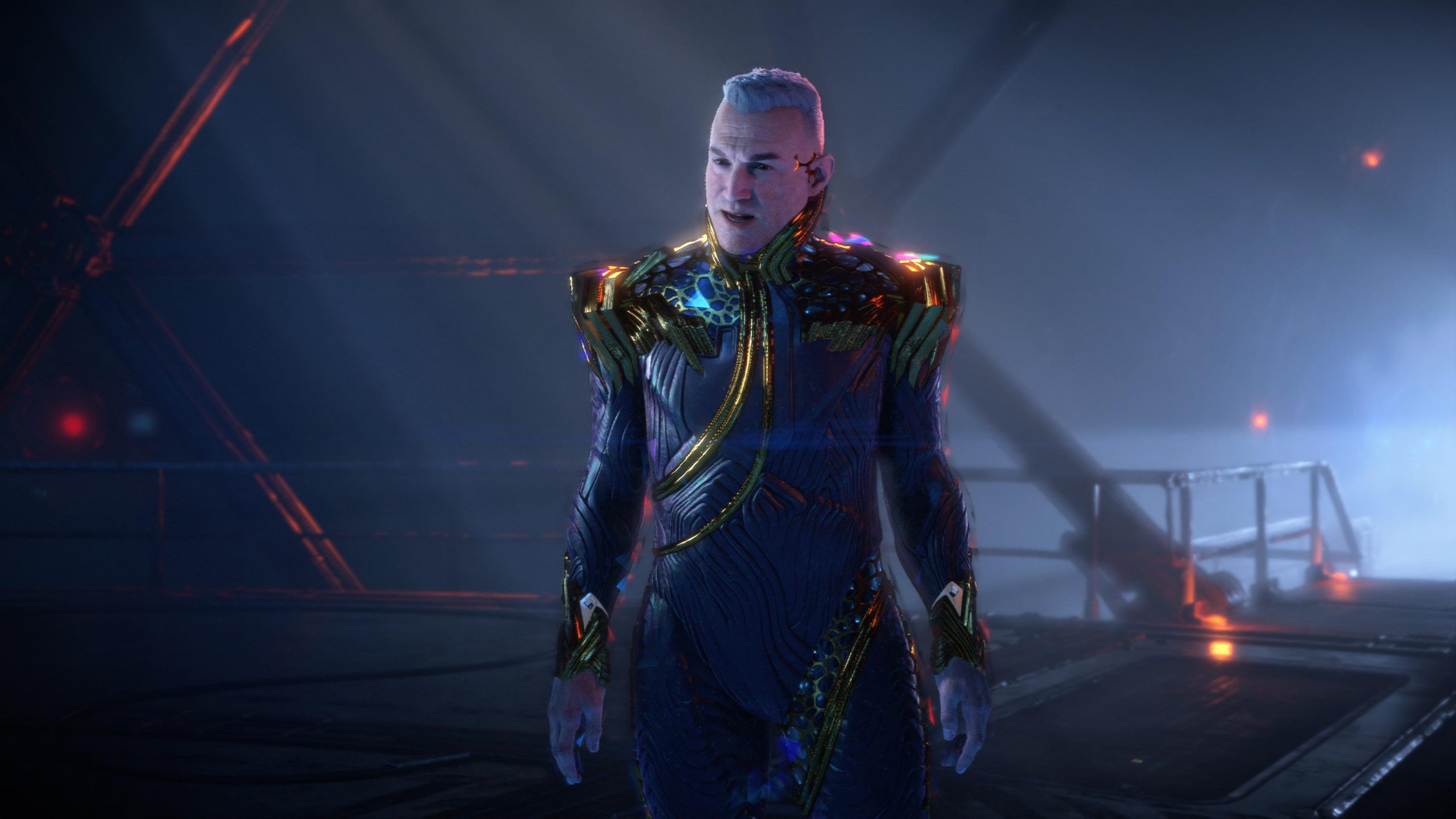 If we are to discuss graphics, then there’s only one way to state it. The game is simply the most beautiful PS exclusive ever released to me, and trust me, each of them competed furiously for the title. The game runs on two modes on the PS5 – one that favors the resolution, and the other – the performance. On the first, the game looks simply jaw-dropping. There are very few games that improve on the initial gameplay trailers and this is one such. The diverse landscape does accentuate the beauty, but the way Forbidden West has been designed only shows how much attention Guerilla Games has given to each and every aspect. The grass waves under your feet as you move, the land can be seen decaying due to a fine haze of particles rising up from the lush greenery, water actually appears dense and fluid, and the underwater landscapes are outstanding and feels like a totally different world with its own vegetation, shipwrecks, and creatures. Character animations have been fine-tuned to the point where Aloy behaves more like a human than ever, with new expressions and body movement. The simple act of her flipping over and then righting herself if she encounters obstacles while sprinting might seem to be something small, but they add to the genius behind the game development. 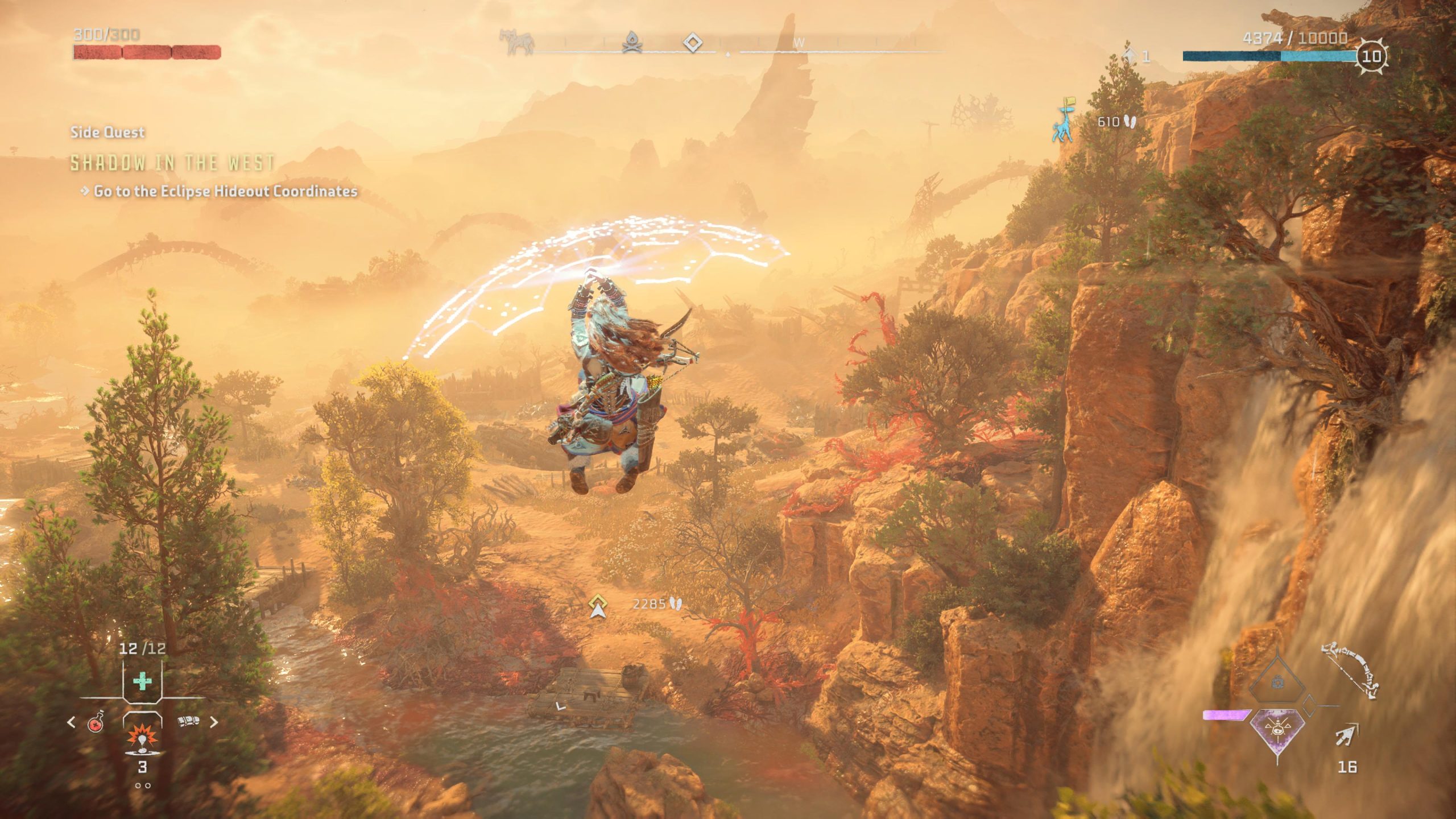 Even on performance, the game manages to look incredible while churning out 60 FPS, which is very important in scenarios where combat often involves you pitting yourself against fast-moving machines. The world looks as natural as it can possibly look in a video game with even omission of the markings that indicate ledges to be climbable noticeably absent, replaced instead by lines that appear only if you scan your surroundings with the Focus. The changed camera angle while your mount gallops, the way the environment turns to a blur around you, I can keep going on and on about it but the game never ceased to amaze me in terms of its looks. 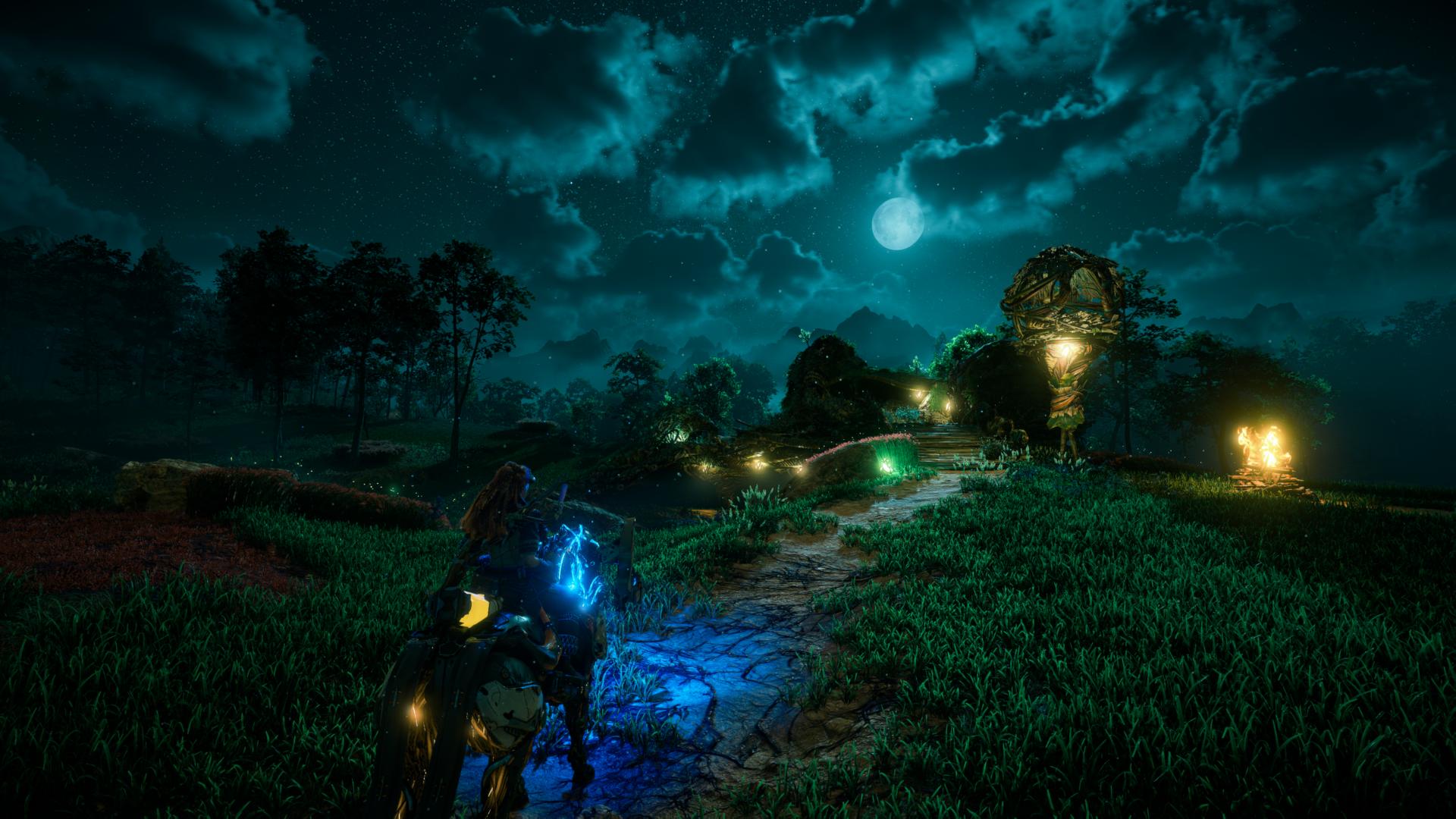 The game offers a ton of stuff with regards to in-game activities, other than the main quests. The diversity of the mechanical wildlife has been vastly increased to encompass a large number of enemies, each with its own weaknesses and strengths. Side quests are meaningful and have already been discussed previously, but even apart from them, the game has a lot going on. There are ruins locked by puzzles, each containing ornaments, and some of them are ones where you can only explore if you get past the story a little. There are viewpoints that conjure holograms that can be lined up with the surrounding scenery to get a glimpse into what life used to be like previously. 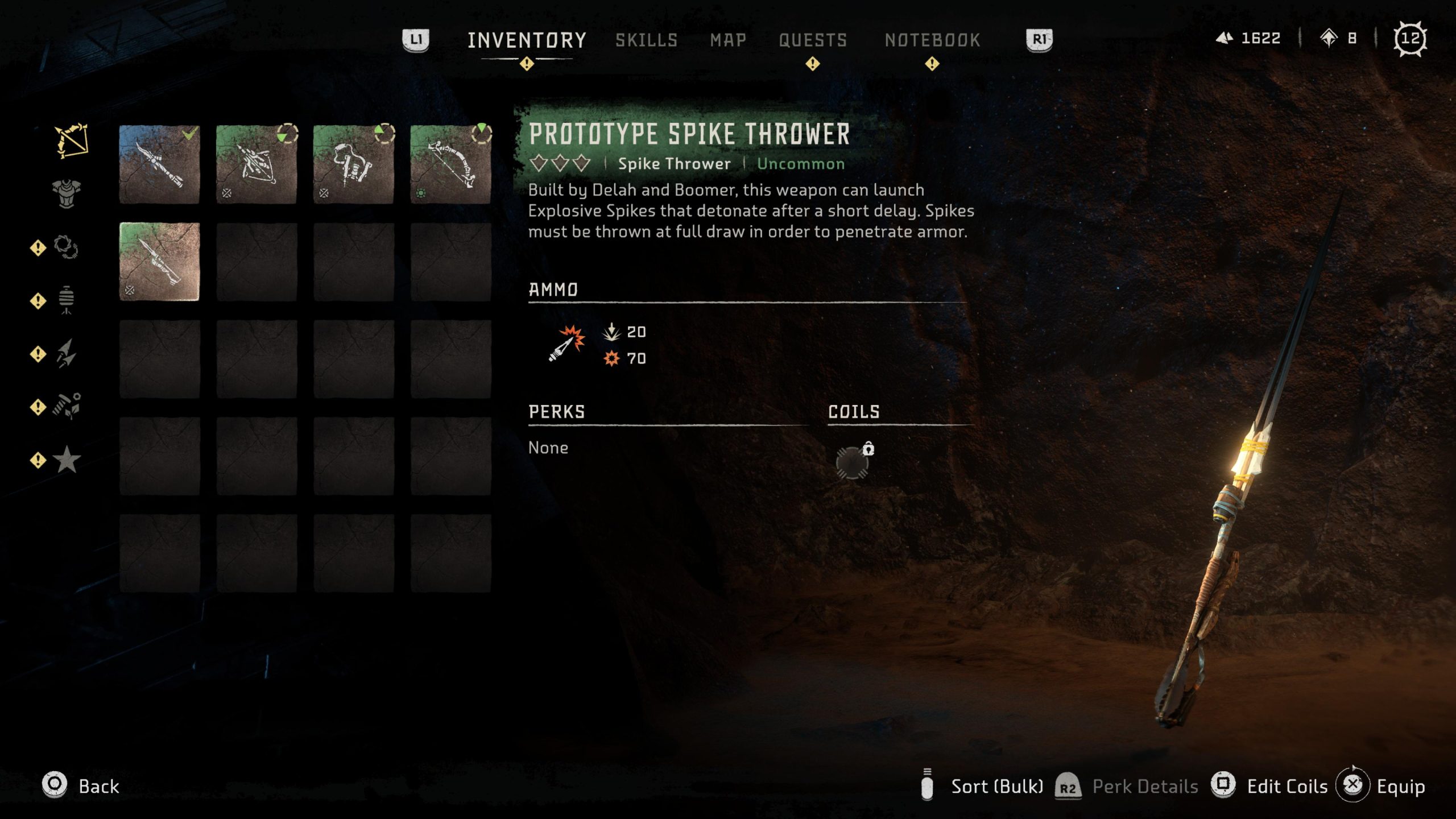 Contracts are offered to Aloy throughout the story, where she has to obtain machine parts for inventors, armorers, and such. Rebel camps are places that do not have only humans or machines, but rather humans controlling or mounting machines, something that was only limited to Aloy previously. Even picking up collectibles in each region contribute to progress in certain quests, and the act itself involves quite a lot of platforming and puzzle-solving. The game feels rewarding and the monotony which is often faced by those who are looking forward to earning a Platinum is something that will be experienced far less in the Forbidden West. 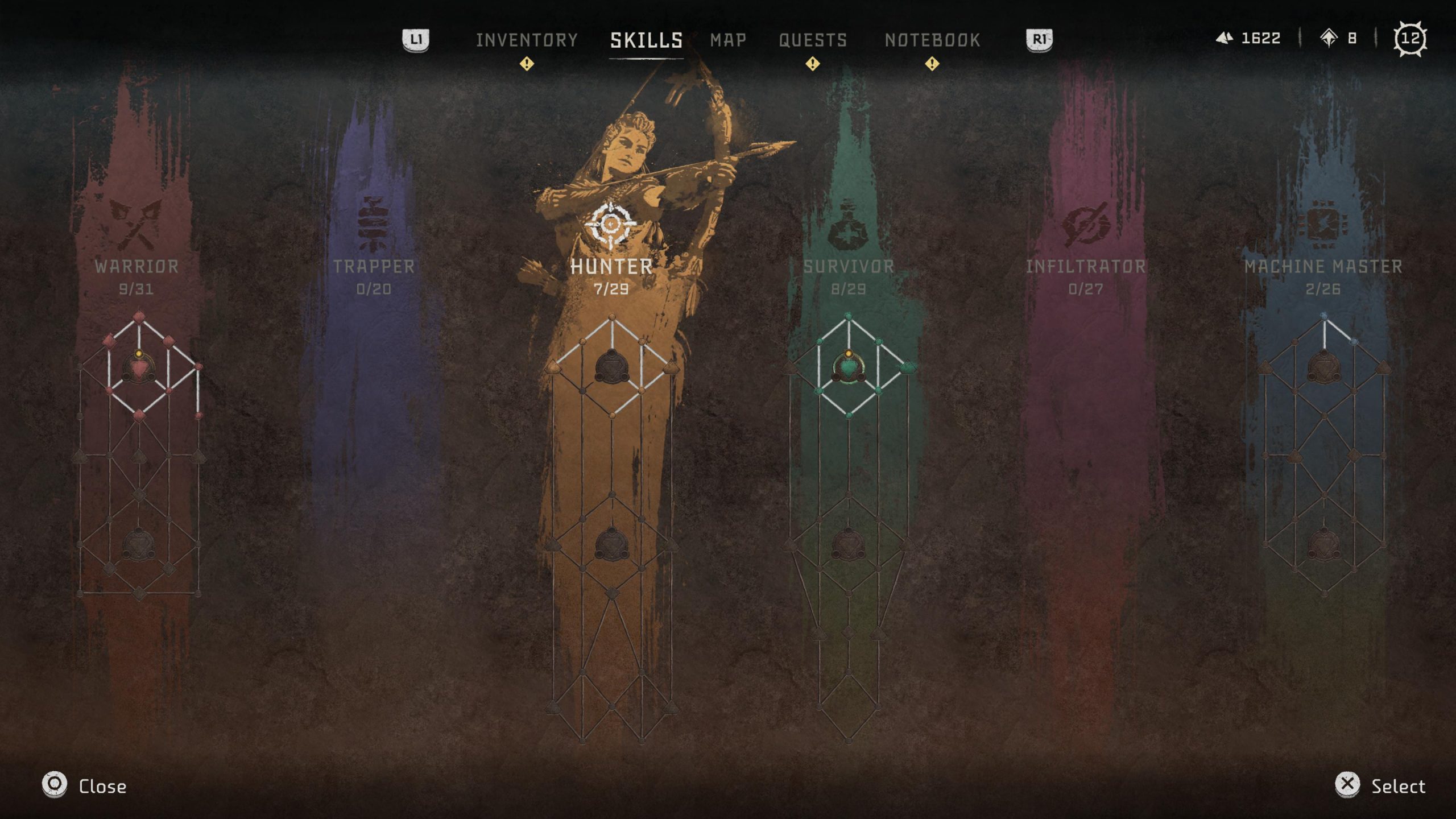 The sequel offers a lot of innovation in terms of gameplay. New gear has been added this time around, such as the Pullcaster, which helps Aloy to drag down grates, vent covers, and other obstacles in her way, and the glider which allows us to sail across puzzles without any handholds in the way. Weapons and armor can be customized a lot, both by upgrading them at workbenches using materials obtained from the world, as well as by adding different coils and weaves which add new features to them. 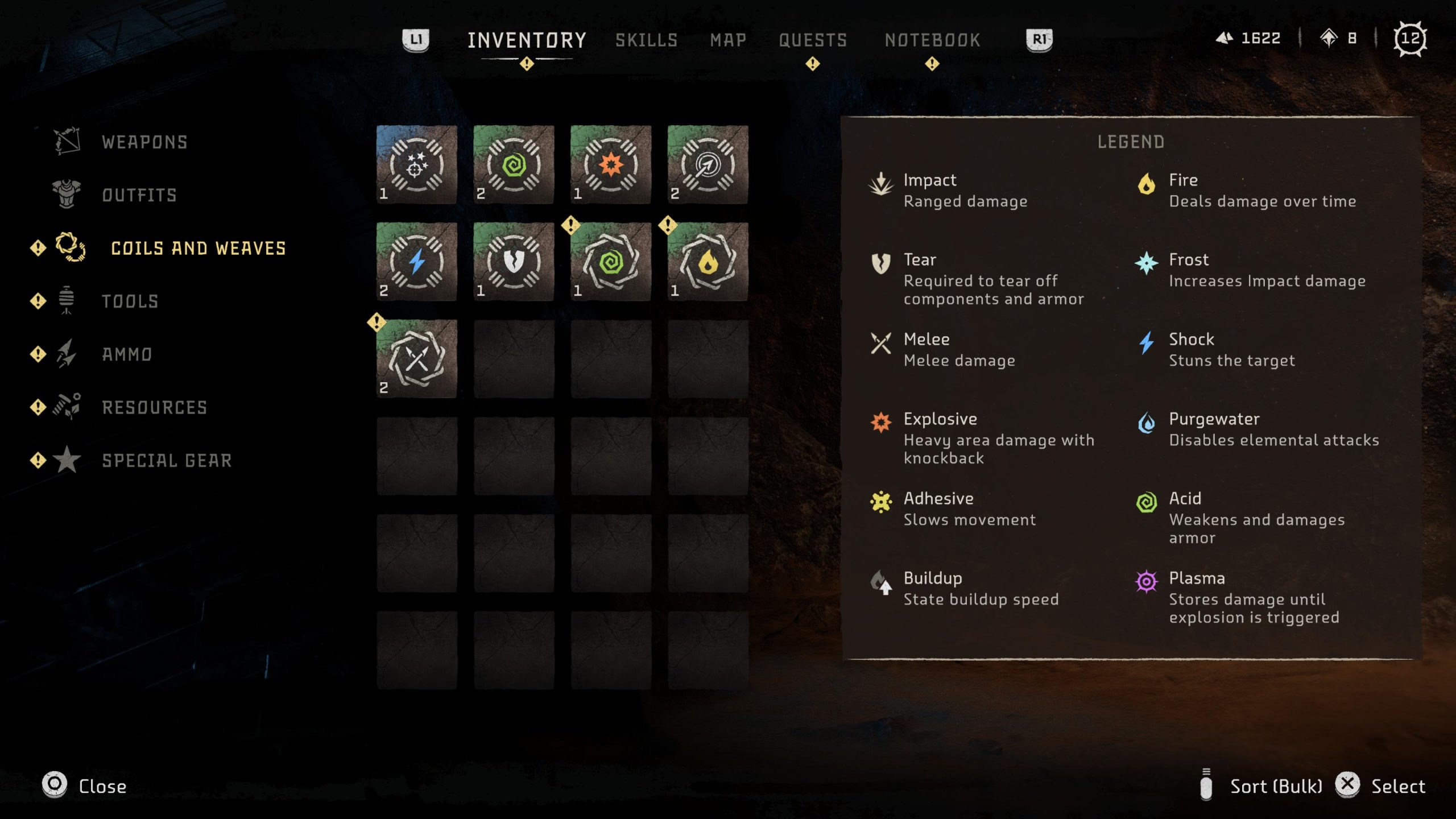 There are also a number of skill sets, from which Aloy can unlock new skills from points she gets when she levels up. These lead to a lot of benefits – such as making her craft traps and potions faster, increasing her stamina as well as by increasing new attacks such as the ability to rain arrows down on enemies. Unlocking a certain number of skills also gives access to various Valor Surges, which depend on the skills unlocked and are extremely powerful abilities ranging from increasing your melee damage a 100% to increasing elemental resistance. Combat and gameplay can thus be modified according to the player’s individual style and this results in a lot of permutations and combinations in the gameplay.

Disclaimer: Thanks to Sony India for providing us with a review code for the game.

Horizon Forbidden West is a game that is unparalleled in terms of beauty. Even if we disregard all the other elements – combat, exploration, puzzles, and story, it’s the sheer beauty of the world that will draw you in and leave you spellbound. Fluid combat at 60 frames per second, a gripping plot, and an atmosphere like no other, the game never ceased to deliver. A jigsaw of primitive and futuristic lives, Horizon Forbidden West, once put together, forms a painting that will draw you into a unique adventure for 30 hours and counting, and will probably keep you wanting more.