I still remember when Sony showcased its 2018 God of War. No one had a clue what was coming until the god of war theme music came into being and then suddenly everyone started shouting and screaming with joy when they realized what was to come on the big screen ahead.

What followed later was an amazing journey of Kratos and his son  Atreus reaching the top of all the nine realms to spread Faye’s ashes, wife to Kratos, and a mother to Atreus. The entire journey showcased Kratos’s past hardships and his journey to different realms with his son Atreus and the bonding that both father and son had created during the time.

Fast Forward to 2022, we finally have the sequel, titled Ragnarök and it is exactly what you would expect from the game and some more. So without, any further ado, let’s get into the review which will be spoiler-free for the most part as going in blind for people would be the best choice moving forward. 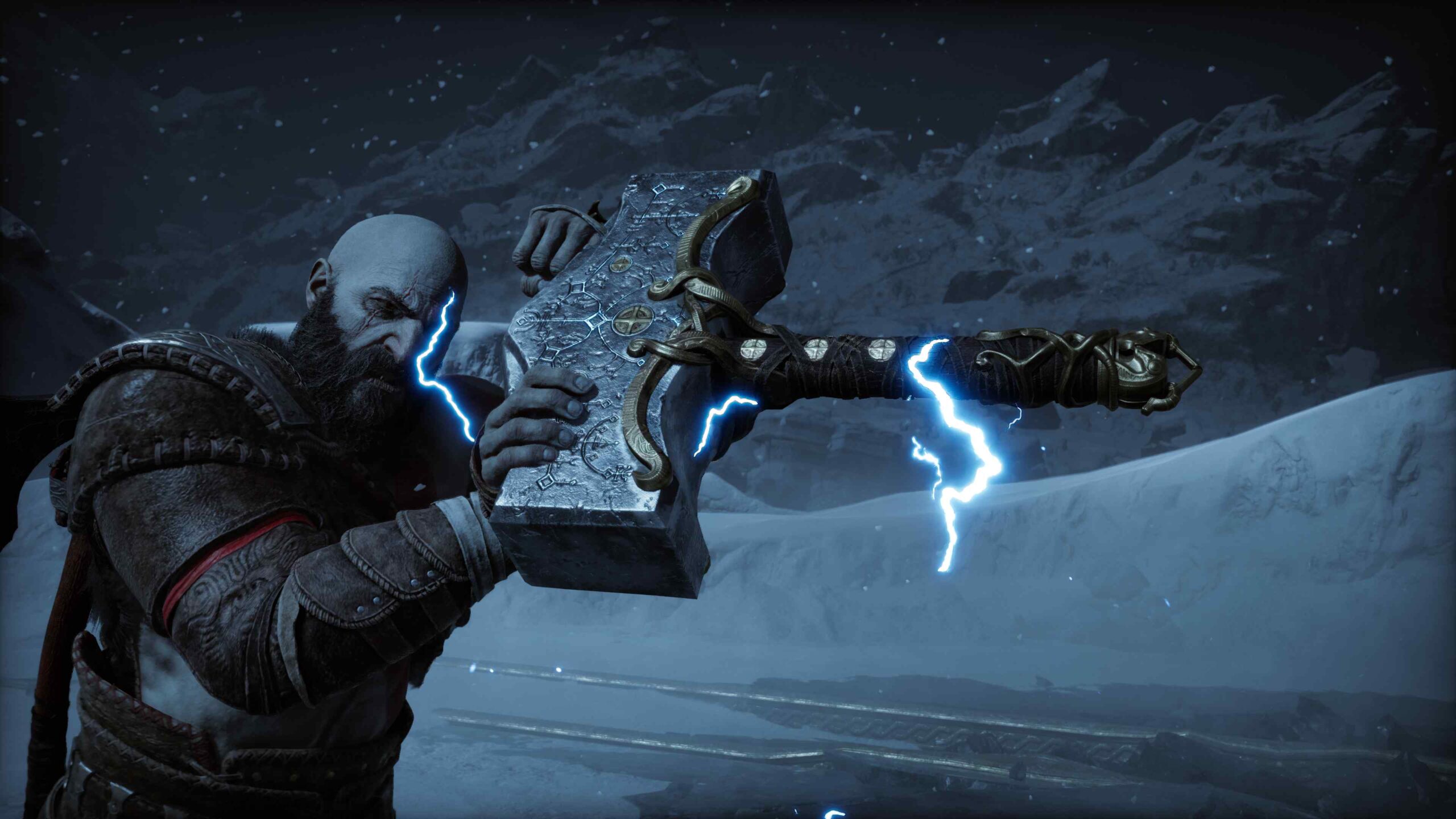 The journey begins exactly a few years later from where we left off in the first game but is only followed after a short but meaningful tutorial to make both old and new players accustomed to the controls. Atreus has grown now from being a kid to his teen and the shift in the father and son relationship can be seen from the very first instance till the final moments of the game. They have more understanding now between themselves and have evolved compared to the last game which only keeps improving as the story progresses. 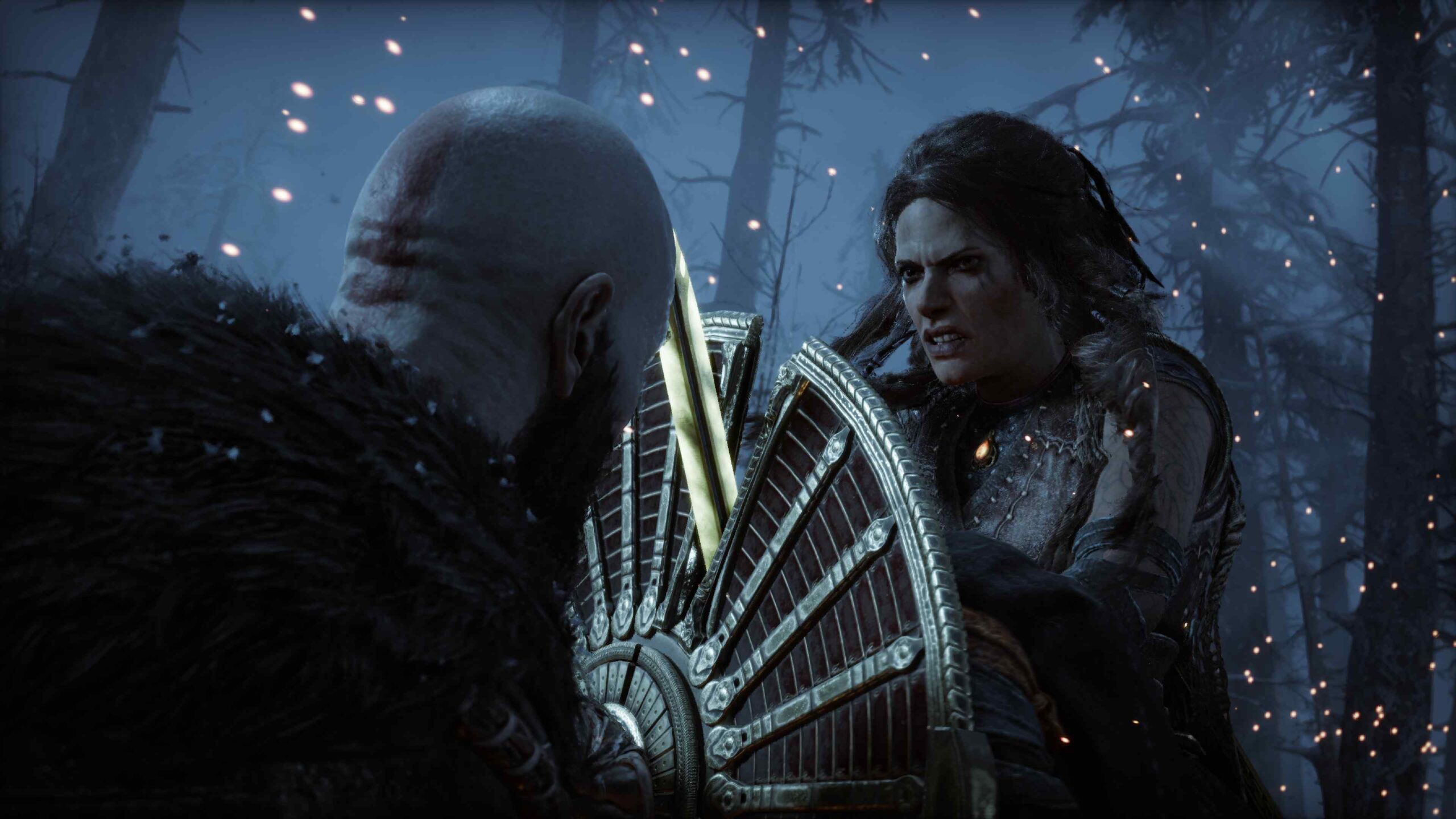 As soon as you get into the pause screen, you would notice the new UI system in place. Ragnarök has a much smoother and easy-to-read UI when compared to the first game as it provides a better understanding of the items and sets that suit your play style.

Tuning your build according to your gameplay has never been better till now as the minimalistic UI helps a lot in making decisions faster. 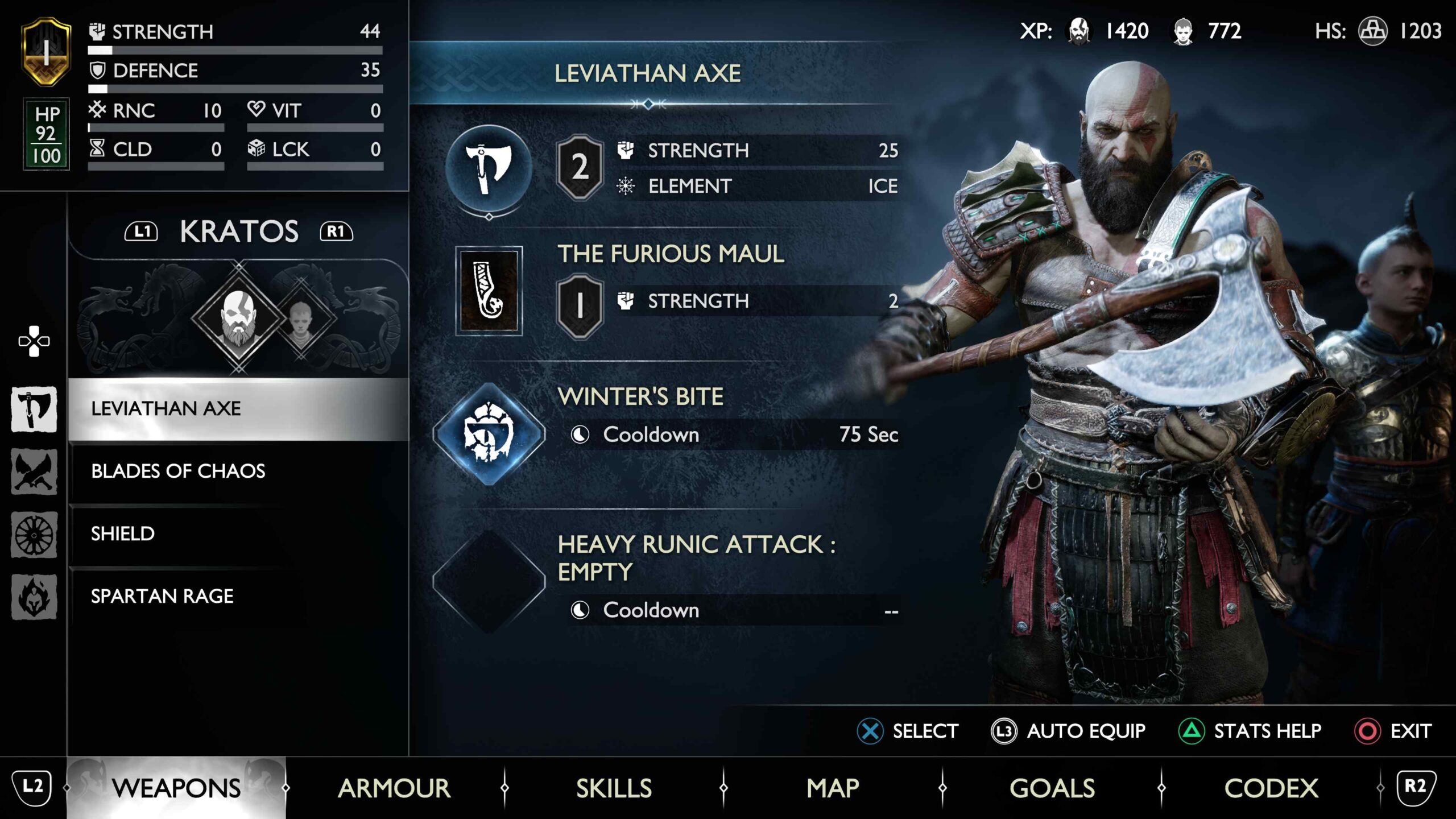 The combat feels more refined now and also packs a punch with tighter controls and fluid animations of body movement.

There are different varieties of shields to choose from this time around which helps in providing variation while navigating between enemy waves and each with its individual features which help in different ways to block/parry enemies. 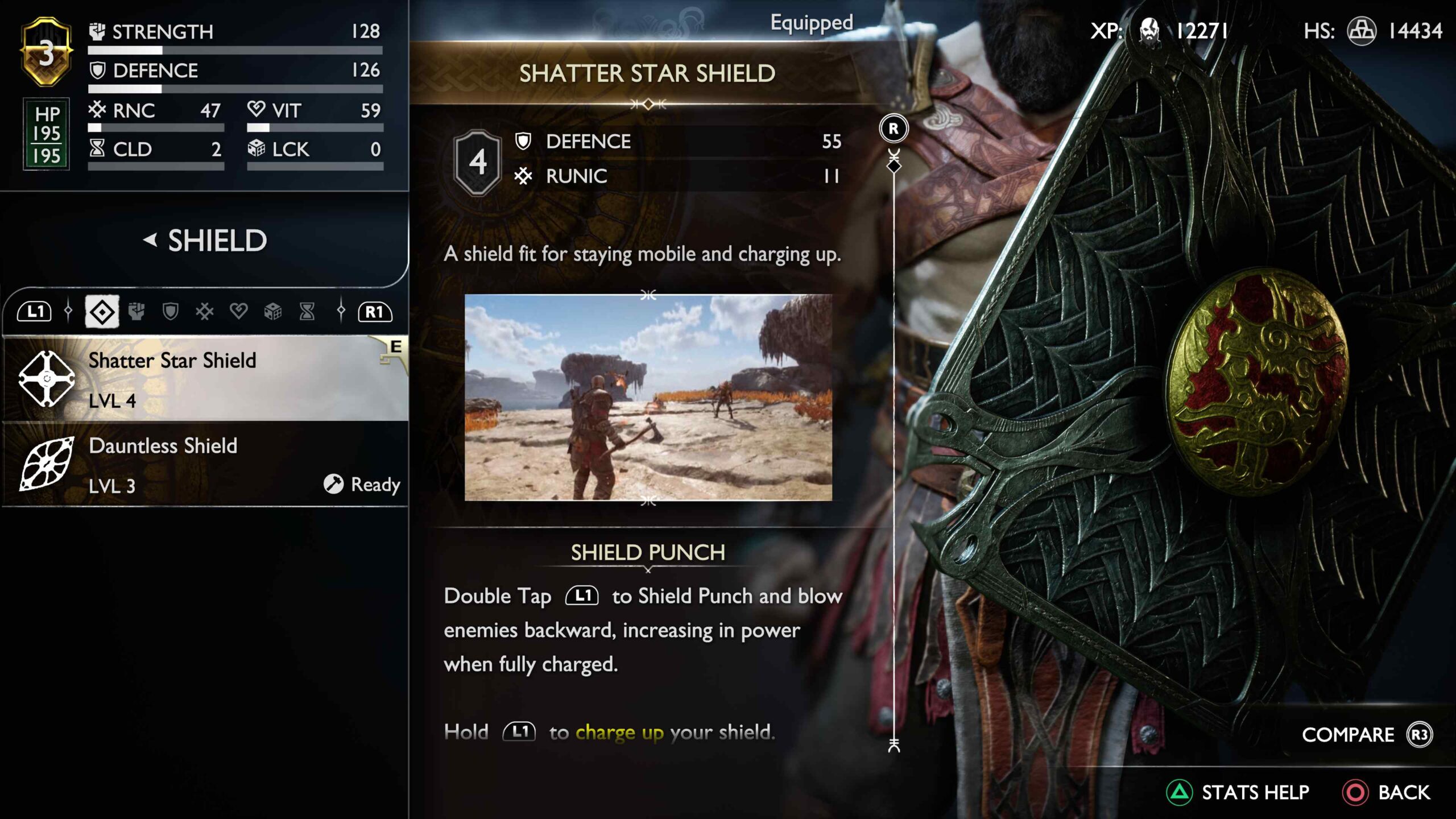 There are also new light and heavy attacks for our weapons as well as a new way to get into upper platforms and traverse the environment via our blades of chaos which is a neat feature and one which will be used a lot in the entire play-through. Both light and heavy abilities can be upgraded as well providing additional raw damage, Runic damage, or Stun damage to the opponents.

Skills are present as well from the first game with a few of them getting carried over here in Ragnarök, enabling which unlocks the newer skills which are present here adding new techniques and melee/ranged combat and even new techniques to the game. 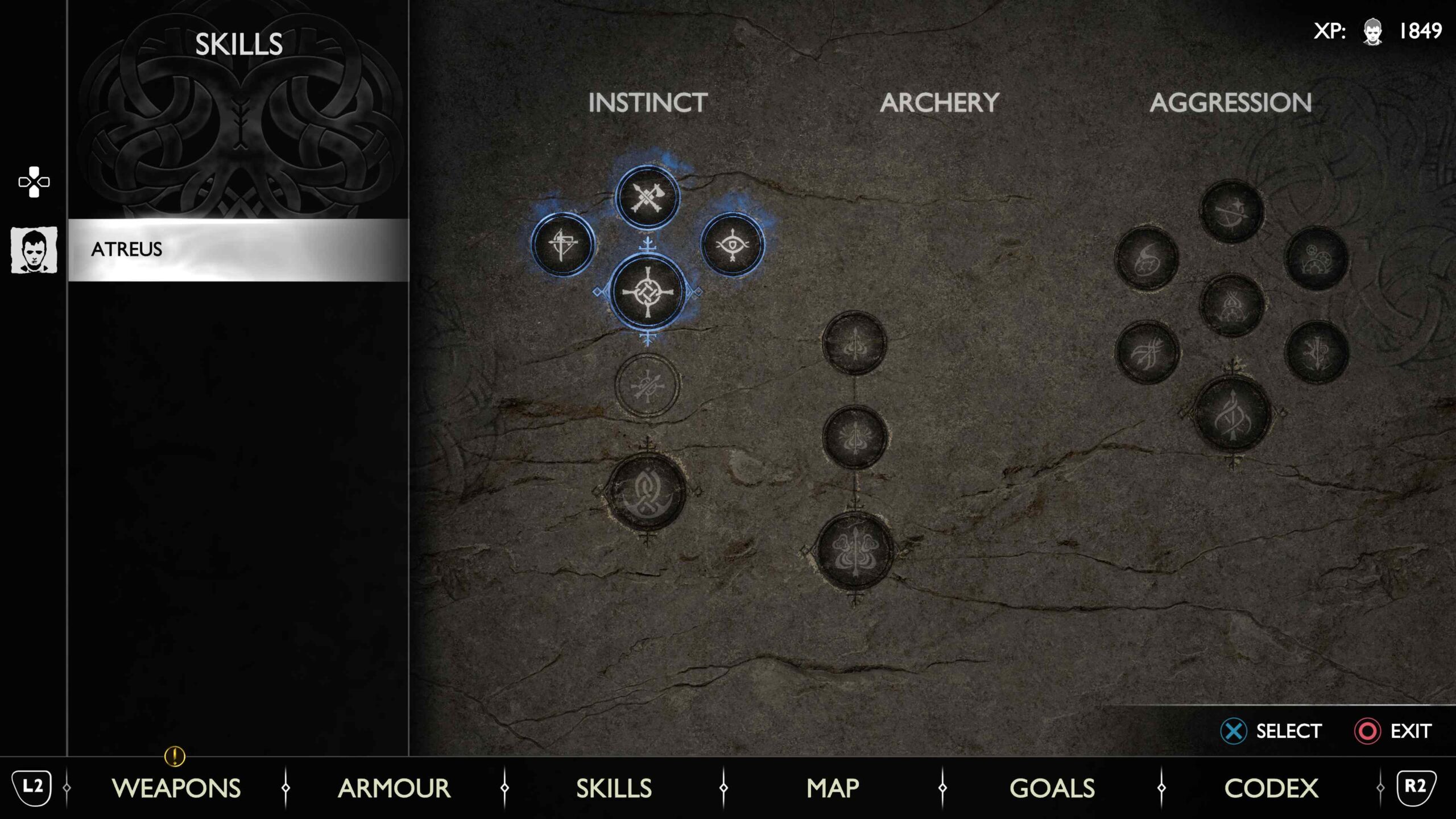 We do have all the necessary upgrades/ treasure chests here as well, exploration of which will provide players with new light and strong abilities and upgrade items for their weapons or armor sets.

Dew’s providing permanent stats of +2 is back as well while navigating in the boat and exploring the realms. 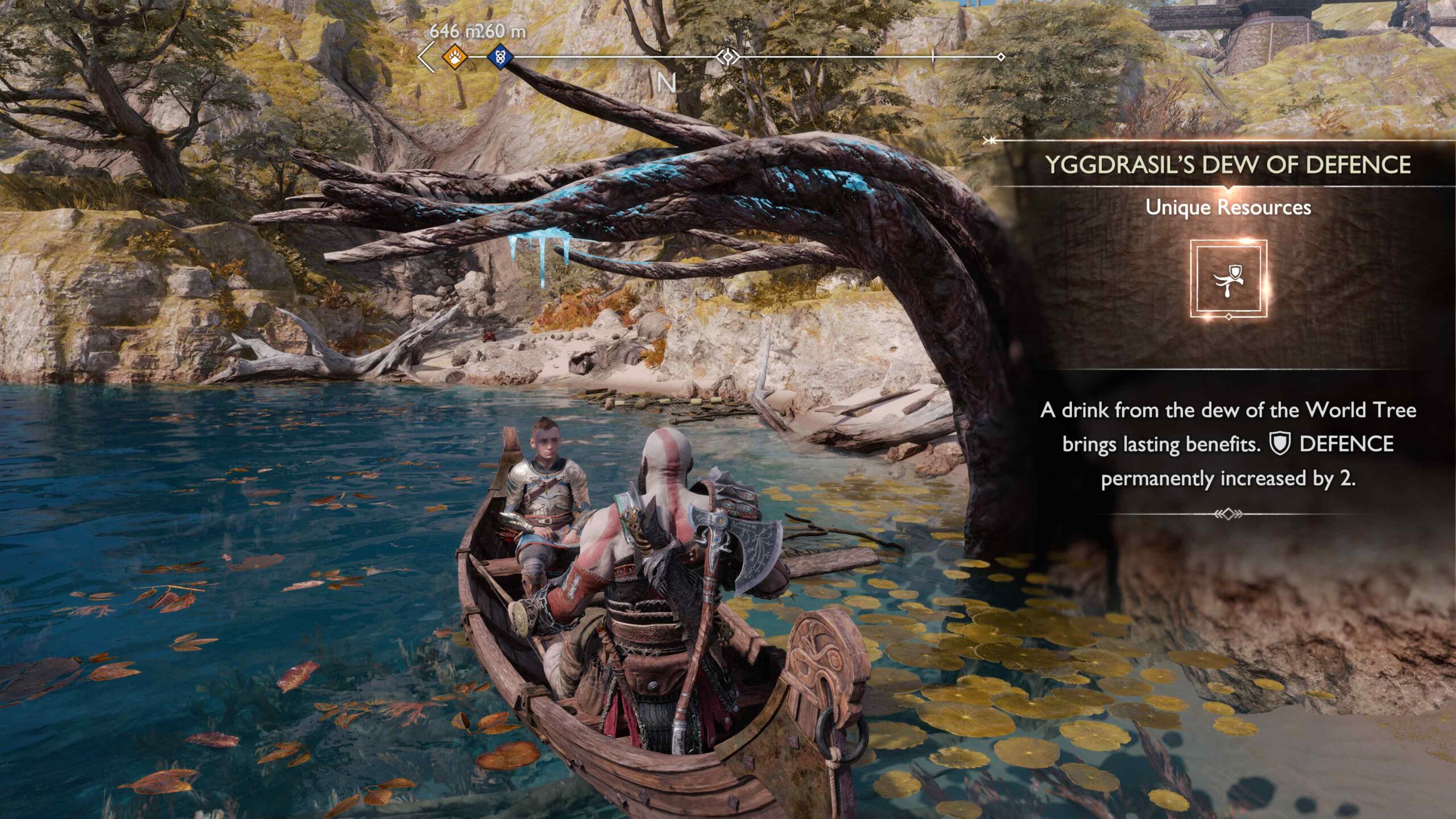 Increasing maximum health/Rage meters make their return as well here with puzzles to solve to open the chest ranging from easy to irritating ones but nonetheless providing a meaningful outcome with rare materials or items. 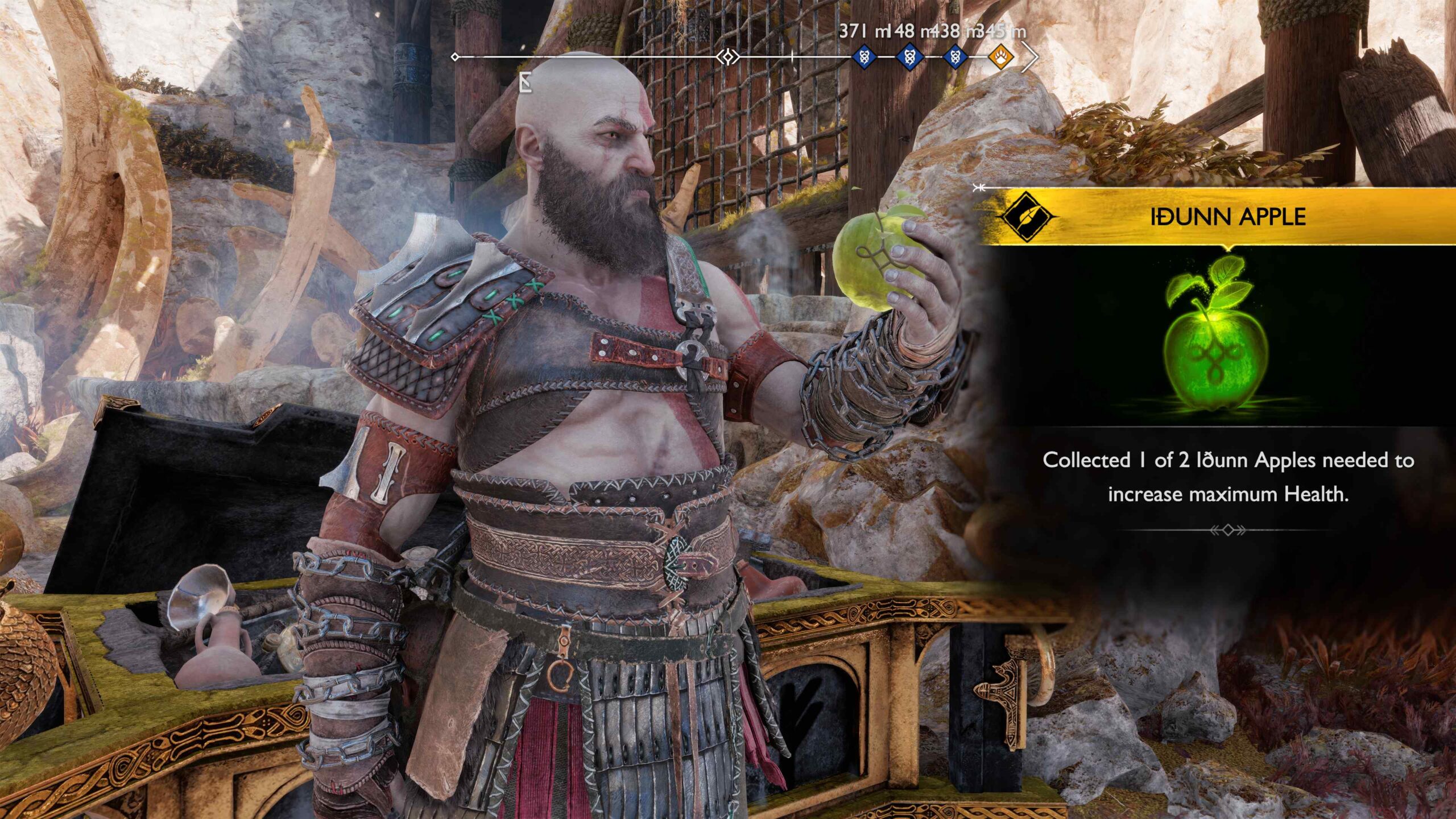 The realms that existed in the first game now have a different variation to them thus changing the whole landscape and how it used to feel vs now. There are several changes to all the realms and we get to explore new realms as well which were locked before in the first game and they look absolutely stunning. 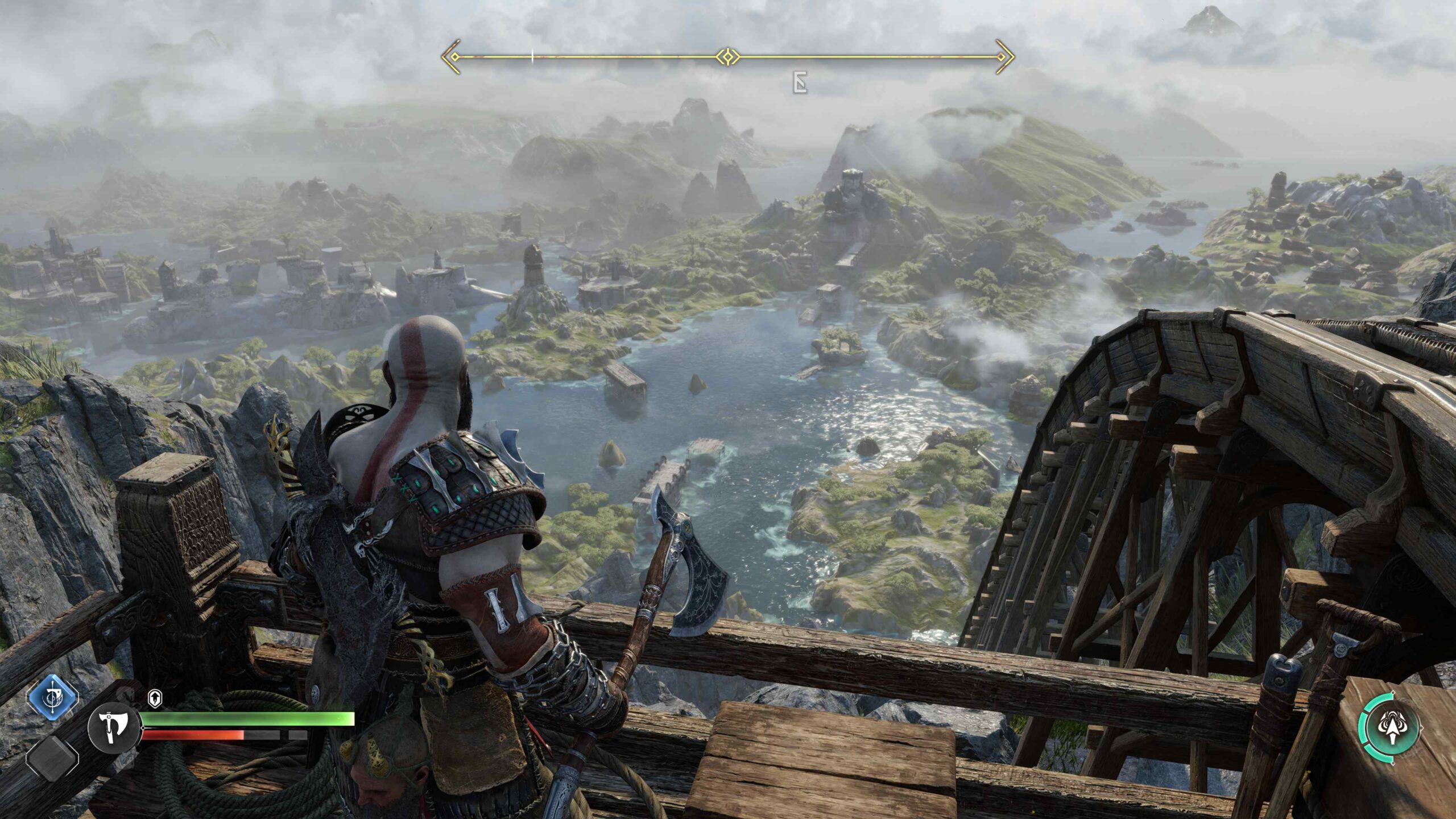 Speaking of realms, you get to explore all of the nine realms this time around and all of them are unique in their own way both in terms of climate and habitat thus providing variations in design. 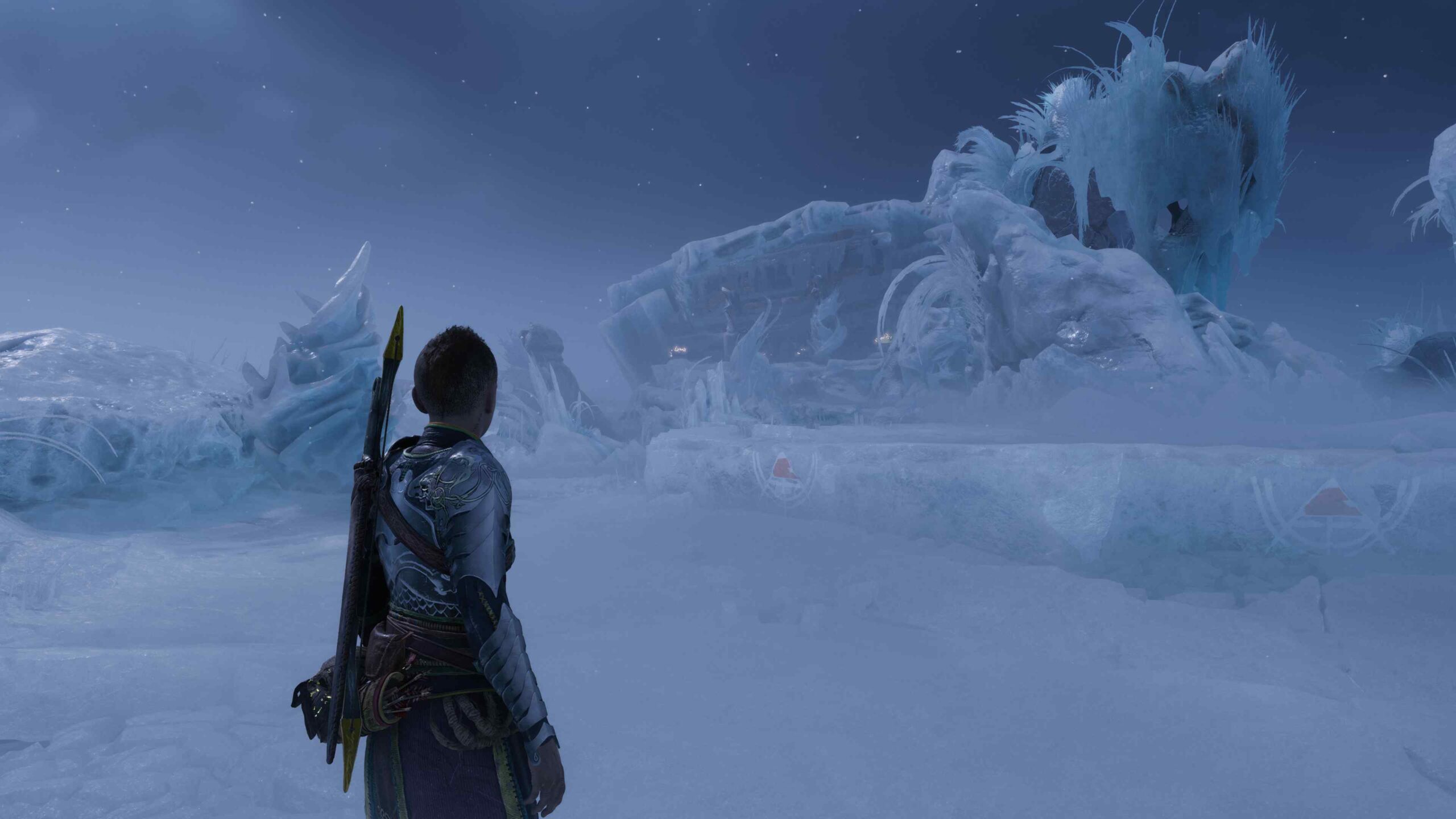 Each realm offers huge exploration opportunities and getting to certain areas requires mini puzzles or blockage to solve later providing solid loot to the players.

With the game being on the PS4 platform as well, it does not step back in performance or looks. Ragnarok runs at 60fps with no problems on the PS5 at all times even during intense combat or particle effects all around. 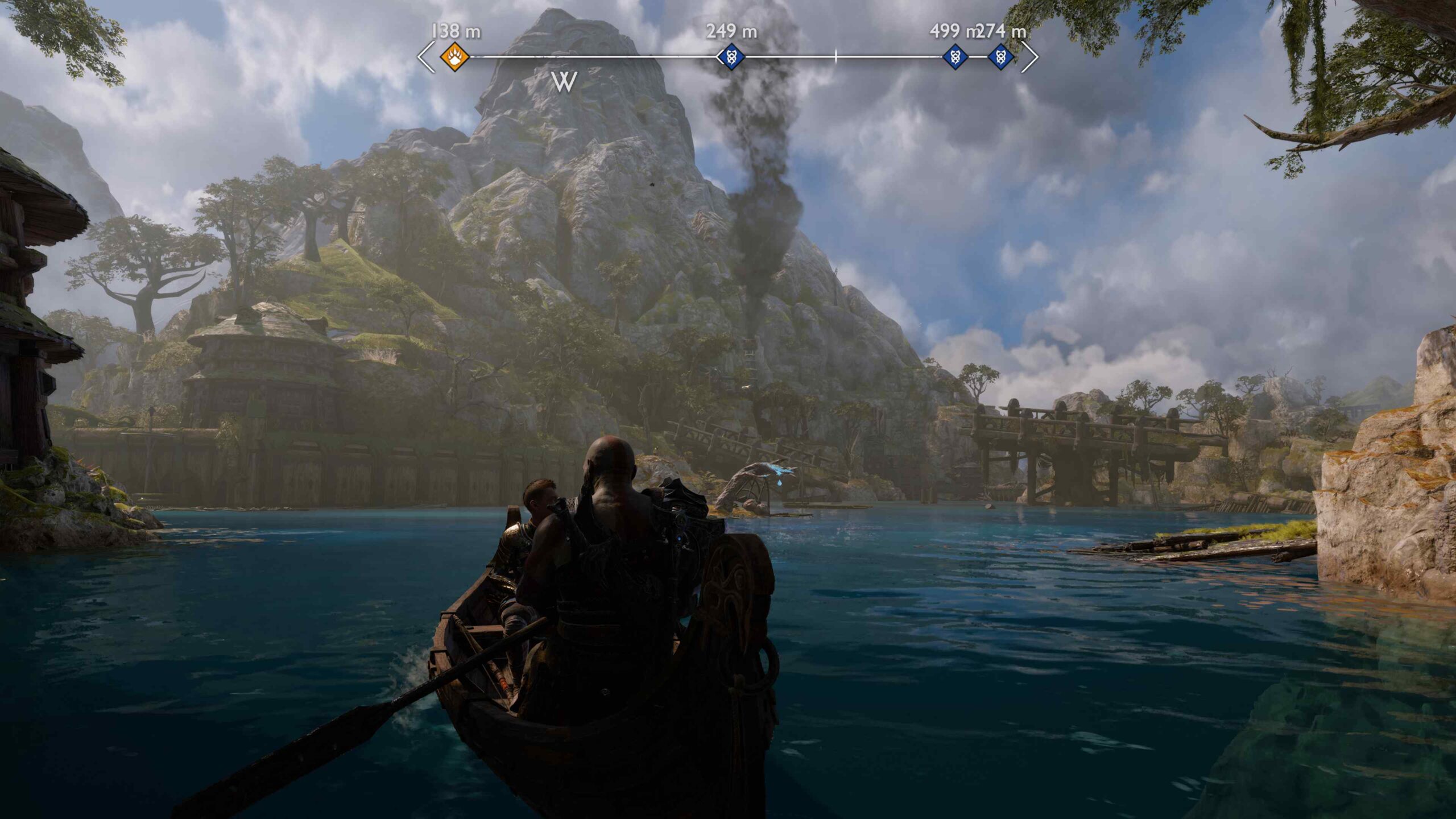 I haven’t had a single problem or bug encounter in my entire play-through of the game which shows how much time has been spent on polishing the game. 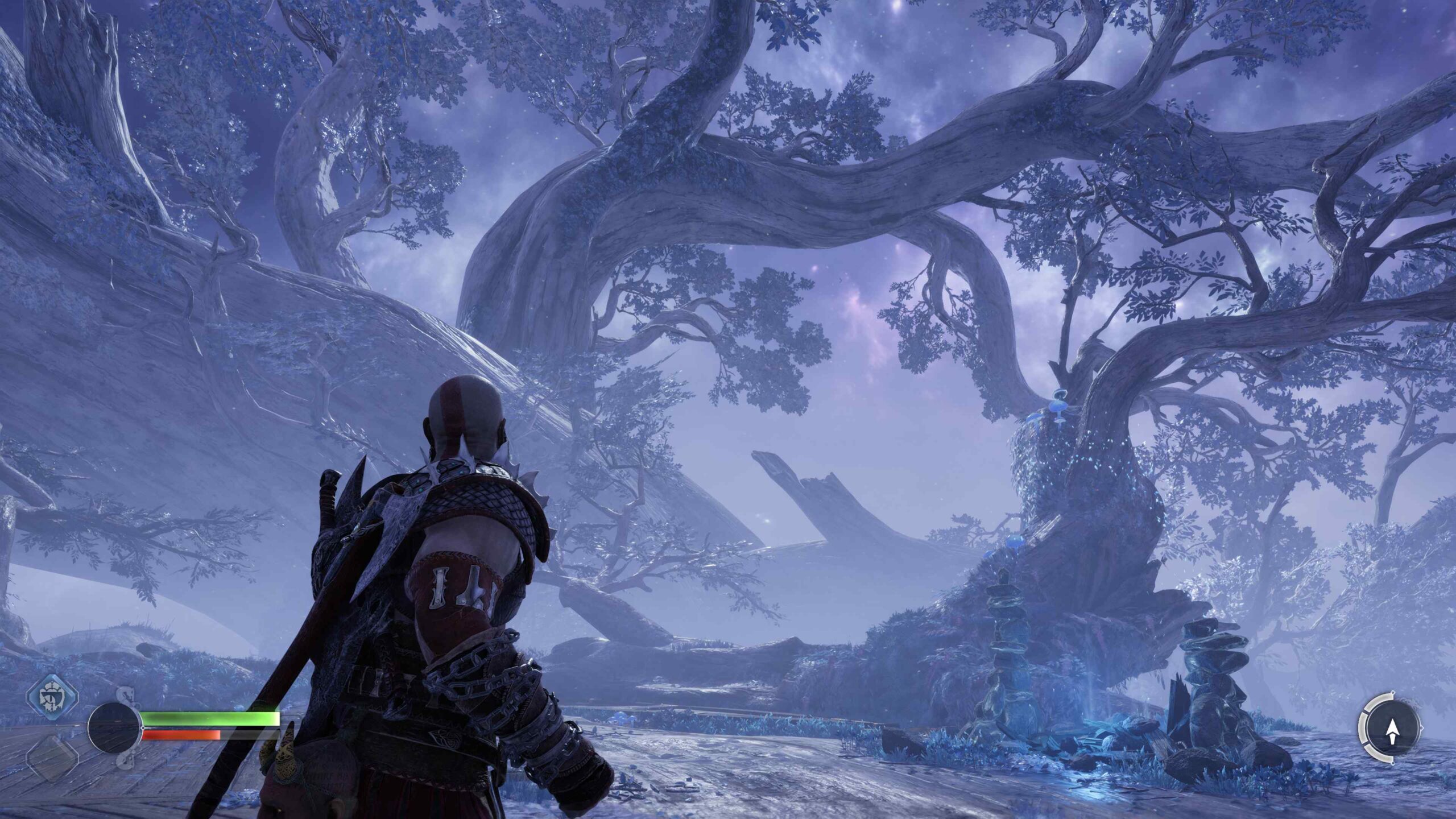 Here are the officially provided graphical settings for Ragnarok provided by Sony themselves and it did hold true in my play-through. Crisp image quality coupled with tons of details everywhere including all the main and supporting characters provide a lot of depth and realism in Ragnarok. 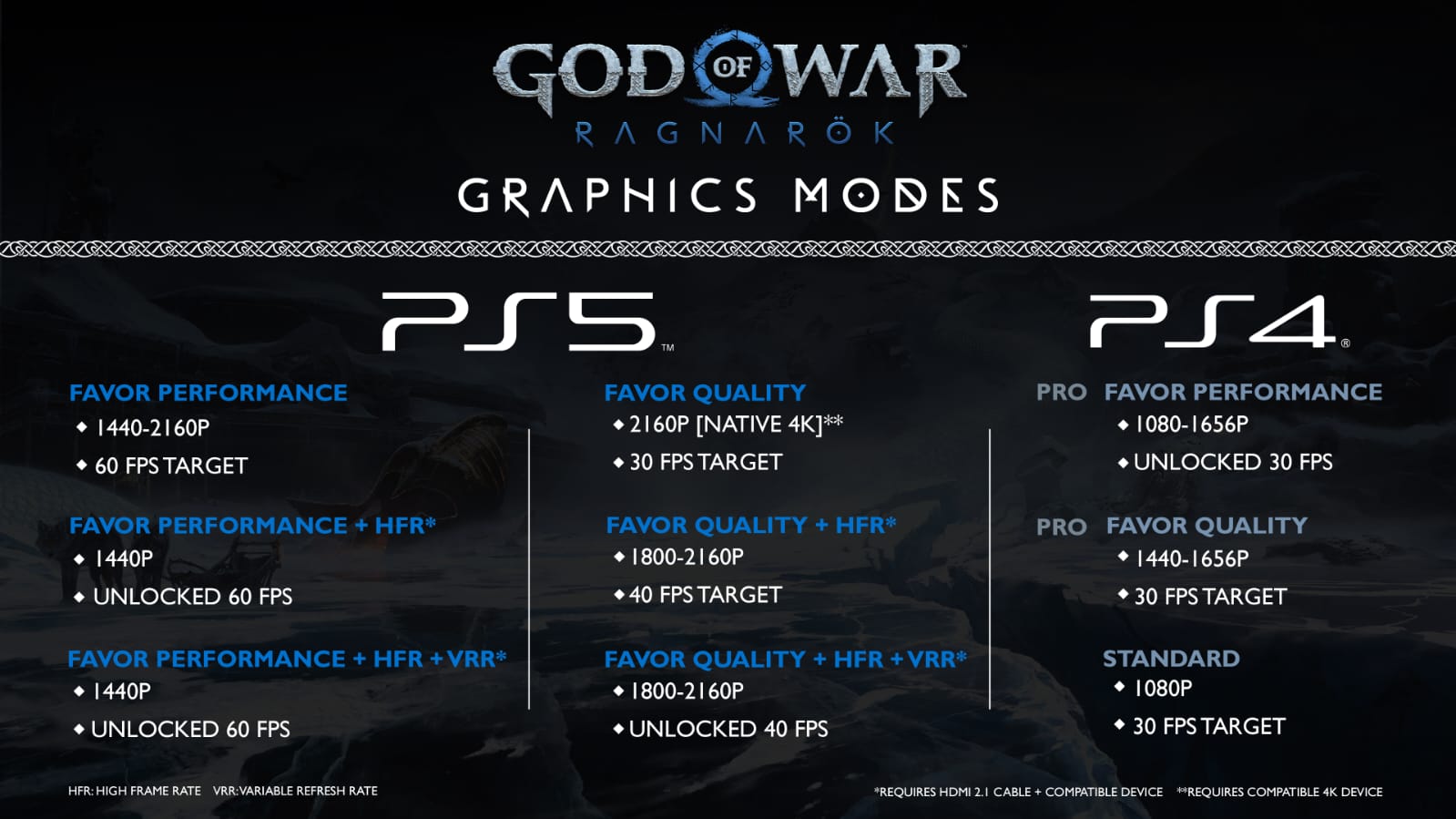 The one-shot take holds firmly here and it does not take the player out of the action and keeps them focused from the beginning till the end of the journey.

Enemy Design and Side Quests:

Both enemy variation and mini-boss encounters feel different and do not feel repetitive in any place. They all offer lore and information needed by both Kratos and Atreus which help guide them in their journey. 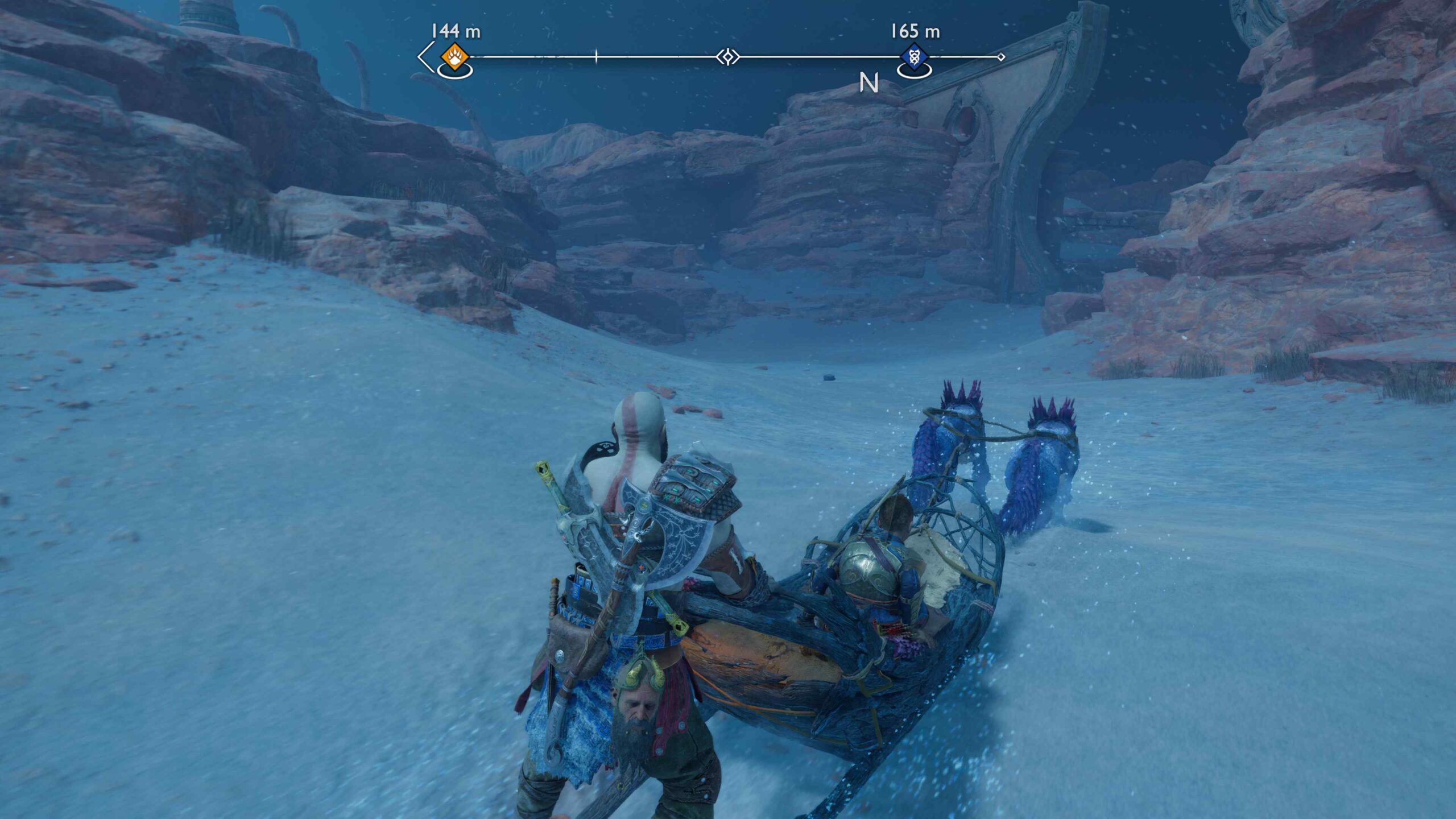 Side quests/favors add extra game time which feels rewarding and distracts you from the main quest but for a good reason as completing them gives more perspective and interaction between both Kratos and Atreus while Mimir provides background on them as usual on your entire journey regarding everything including his own story arc.

There are lots of surprises to experience here when it comes to gameplay, loot, and end-game quests. All the main and side characters have their own interesting story arcs which we get to experience throughout our journey. 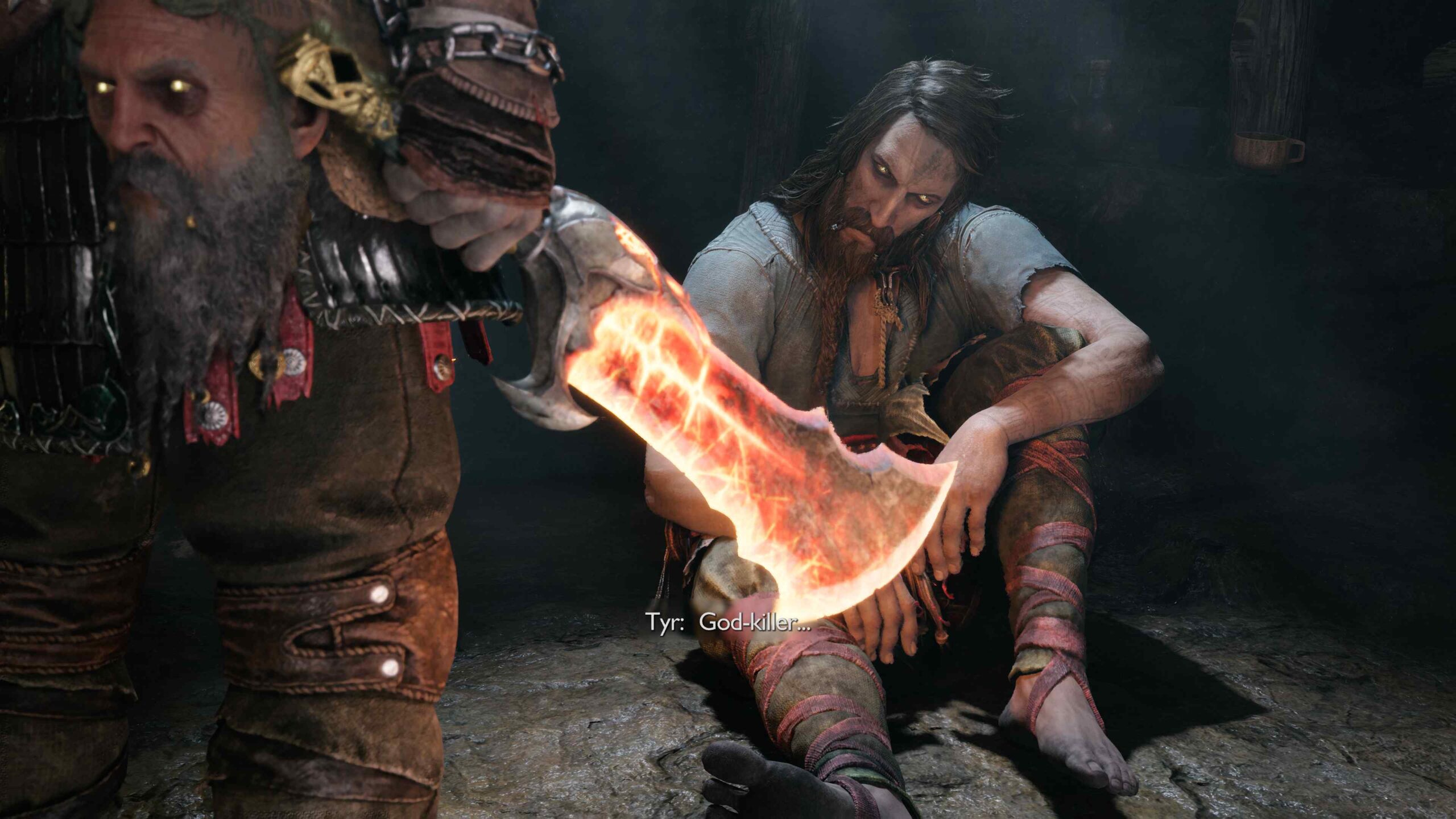 While Kratos, Mimir, and a few others sound the same, Atreus’s voice has changed dramatically given now that he has all grown up and isn’t a child anymore.

The background music while traversing the open world in different realms has a very relaxing tone to it while combat has a high-pitched heart-thumping energy that matches the action displayed on the screen providing an immersive experience.

Character animations are on point the whole time and their emotions can be felt by just looking at their faces which only shows the work being put on this front, therefore, adding more immersion to the experience.

God of War Ragnarok releases on the 9th of November 2022 physically and digitally for both PS4 and PS5 systems. Check below for links to buy the same.

Disclaimer:  Thanks to Sony India for providing a game code for the Review.

God of War Ragnarok is a true and improved sequel to the original 2018 God of War on all fronts and delivers massive open worlds to explore and conquer. In spite of not being able to fully utilize the power of the PS5 system due to the game being in the PS4 platform as well, Ragnarok has delivered an improved experience in both gameplay and graphical fronts while also providing better characters, items, and lore in the process without hampering on the overall quality of the game. Game of the year 2022 for me personally. Full score!