I spent the majority of my time in Death Stranding building highways, laying bridges over chasms, and setting up a network of zip-lines to get around the craggy landscape at a brisk pace. For this, I scrambled up steep cliffs, unfriendly rock faces, and trudged through waist-deep snow, not just to deliver cargo, but to help other players. That is the heart and soul of Death Stranding – tapping into an innate desire to help and make delivering orders easier for others.  But does it work as a game?

The core of Death Stranding is picking up cargo, and lugging it all the way to the destination by using a variety of tools at your disposal and walking. That’s it, that’s the game. But a closer look reveals a surprisingly in-depth inventory management system, intuitive tools to help you deliver those pesky orders, and a compelling moment-to-moment gameplay loop that is as simple as walking from point A to point B. It should not work in theory, yet it does, using it to tell a cleverly written, and heartfelt story. 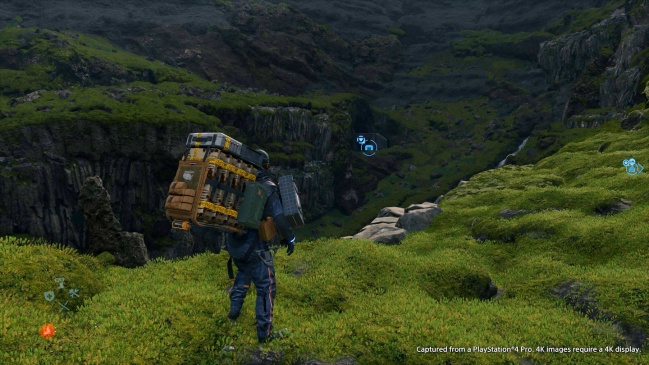 Death Stranding is a game about helping people reconnect. It is a social commentary on how humans have built walls around themselves using the same technology that was supposed to bring them together. It is Japanese video game designer Hideo Kojima’s most political game to date – railing against isolationism with blistering critiques via the game’s many emails and interviews that can be accessed via the pause screen. These ideas are also touched upon by several expository cutscenes – Kojima isn’t exactly known for being subtle. Yet, unlike some of his previous work, this is also his most nuanced work till date, with a script that doesn’t patronise the players, choosing instead to let us figure out the game’s secrets. The blurring of lines between a cinematic marvel and a video game are, at once, Death Stranding’s biggest asset, and greatest flaw.

The first few hours are frustrating. Players don’t have access to the game’s unique set of tools that make traversing through the sombre landscape fun. About the time you start getting annoyed, the game introduces a new tool to play with – a trend it keeps up throughout most of the game. This carrot and stick gameplay is engaging and keeps you going, and as soon as you are given the ability to build bridges, it is too late to back out.

Kojima Productions uses the same hooks as social media to keep us engaged with Death Stranding. A well-placed bridge, a ladder that helps other players, signs that either encourage or warn players about the road ahead, all of it can be interacted with via ‘likes’. This prompts players to seek out and build structures that can be used by the community for validation by others, spurred by the constant stream of info every time someone uses your stuff. 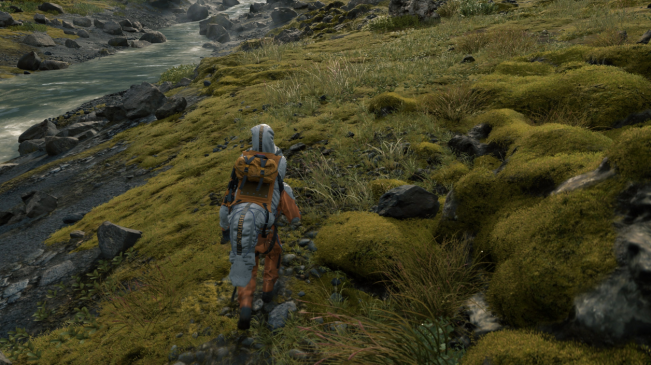 Unsurprisingly, the pings of validating text appearing on your screen are a fantastic incentive to help as many people as you can. While Hideo Kojima has gone on record saying that he wanted to bring people together with his new game, he might have failed to mention how addictive it is. From building highways for faster transport to carving out a path, inch by inch, through the remote regions of the map, there is a real sense of community in this game.

I have quite a few memorable encounters with the stuff players have left behind. One involves nearly running out of stamina and collapsing from exhaustion several thousand feet above sea level, crossing the nearest rocky outcropping to spot a player-made shelter in the distance. It was either that or freeze to death. The other involves sneaking through a BT infested territory, with fragile cargo latched to my back, desperately in need of a quick exit. Then I spot a gold-painted truck just hidden out of sight, sheltered from Timefall to prevent deteriorating. I made it a point to send this player a message on chat for saving my hide. Maybe the real Death Stranding are all the strands we make along the way.

Sam Porter Bridges inhabits a bizarre world. One where rain accelerates ageing of anything it touches, where the stunning world design is striking no matter how many hours you spend in the game. This is a world where BTs, or Beached Things, exist. These otherworldly entities cannot see you, but getting caught by one can mean being dragged to a miniboss encounter, where death is just one bad move away.

Art director Yoji Shinkawa has worked with Kojima since the very beginning and his decades of experience shows in every inch of Death Stranding’s world. From every beached whale, to a pale sun shining mournfully through thick chiral clouds, the design masterfully conveys a sense of loss for a dying world, all without saying a single word.

Death has consequences in Death Stranding. If you somehow manage to die, Sam’s abilities ensure he comes back, but the world will not be the same as it was. You are actively encouraged against killing enemies, and there are very compelling reasons not to do so in-game. This leads to tense moments of sneaking around enemies thirsting for the precious cargo on your back. Later in the game, once you have enough toys to play with, combat encounters are tense, edge-of-the-seat experiences. The stakes are high, the cargo is precious, and the enemies relentless. Choose your method of approach wisely. 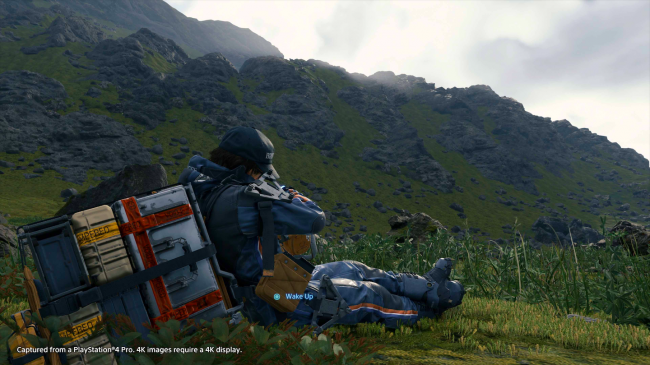 While it takes a little while to set the story in motion, Death Stranding’s narrative is perhaps its strongest feature. Amid all the wacky quirks and immersion-breaking product placement, the strong writing carries the game on its shoulders, powered by impeccable performances of the cast. Norman Reedus, as Sam Porter Bridges, has shades of the Snakes and Raidens of Kojima’s previous work. However, it is Margaret Quailey, and Mads Mikkelsen that steal the show. Nearly every cutscene in the game relies as much on non-verbal communication – thanks to the fantastic motion capture, as much as it does on the exposition. One scene in particular, near the end of the game, would not be out of place in an art film, screened at obscure theatres frequented by monocle-wearing cinema purists. The interpersonal relationships, in a game themed around making connections in a world on the brink of death, is poignantly portrayed.

At the heart of it all is BB. The Bridge Baby unit Sam carries around to help him see and avoid BTs in the field. The cherubic little tot is the emotional core of the story. Players may find themselves taking extra measures to avoid upsetting the child, even as they’re lugging several hundred kilos of cargo around. BB also laughs and claps hands when you do something fun, like running really fast or using a zipline to zoom across the landscape. The joyful bursts of laughter are a shot in the arm and keep you going. After all, anything to make BB smile is something worth doing. 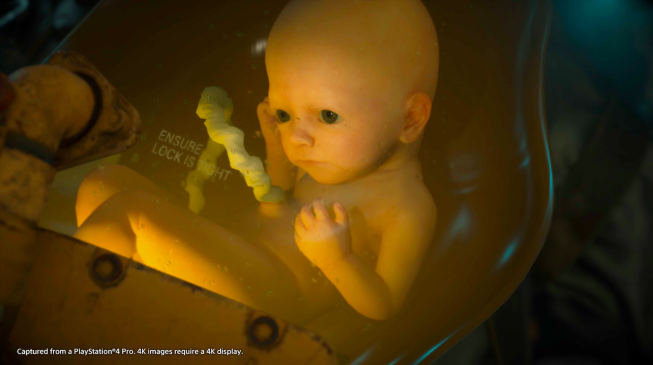 The game is not without its faults, as anyone who still hasn’t played the game will tell you on twitter. As beautiful a story the game is, the core loop remains the delivery of cargo from one place to another. While this, in itself, is not an issue due to the fairly addictive gameplay, the strain of dealing with a lull in the narrative halfway through makes the underlying issues of the game stand out.

It doesn’t help that the game chooses to pad the story out in perhaps the most difficult area to navigate. At one point, the story moves about as fast as Sam does up a steep slope, with a massive cache on his back. It can get frustrating quickly. The good news, however, is that the best half of the story is just beyond those sheer cliffs. 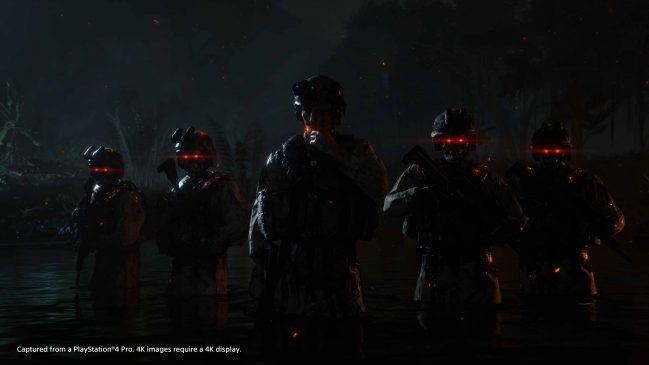 Will Exchange Likes To Save The World

Death Stranding is an easy game to hate. The slow burn nature of the game makes no effort to retain impatient players and demands to be played slowly, at your own pace. In return, the game offers us a real sense of community in making connections and helping your fellow porters out on the long hard road. This is Hideo Kojima at his best, a man unleashed from the shackles of an overbearing publisher, taking back control by making a rather indulgent vanity project with his movie friends. And it worked. Kojima Productions’ first game is the closest we’ll get to an avant-garde video game experience. There isn’t a game like this, and likely won’t be one for years to come.

As divisive as this game is, Kojima has succeeded in his aim of bringing players together – a cursory glance at various gaming forums will tell you as much. At this point, it is safe to assume that he isn’t very concerned with what reviews, like this one, say. For all that matters, he has had the last laugh in his spat against his former employer.

Send me food and video games for blessings