Remnant: From The Ashes Review

From the people at Gunfire Games and the Perfect World team, comes Remnant: From the Ashes, a cooperative action and survival game that makes the question what if the chalice dungeons from Bloodborne were their own game?

In the tradition of the Souls-like games that inspired it, Remnant: From The Ashes is a game that wants the player to make their own discoveries about its various systems and mechanics rather than hold your hand through everything.

Taking the intensive boss fights and skill-based combat of the Souls games and adding to in elements of modern third-person looter shooters, Remnant seeks to carve out a niche for itself. And you might think the S word is getting thrown around a bit too much but the influence in gameplay is undeniable. There’s an equivalent to bonfires called crystals, resting at one will recover your health and ammo while resurrecting nearby enemies. Healing items are limited, and there’s even an Estus flask except it’s called a Dragon Heart. Your character feels weighty and moves like an actual human would and the key to not dying is figuring out the patterns. 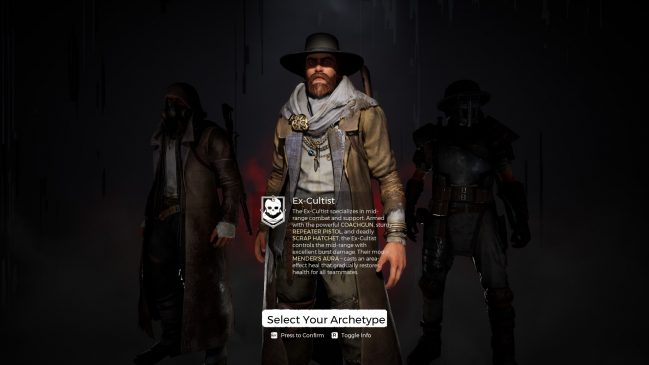 At the start of the game you can choose from three archetypes or classes and let me make this clear right now, it doesn’t matter which class you pick. The play-style of the three classes are practically the same except your starting gear which dictates whether you will be picking off enemies from afar or getting up close and personal.

The only real difference other than from your starting gear is how many points are there into your starting traits, but you will be able to acquire and use gear completely different from your own class with time.

Remnant: From The Ashes allows you to take on two more friends on your co-op adventures, and although the developers claim that we can enjoy all of what Remnant has to offer in single-player, I highly recommend that you don’t. This is because due to the randomized nature of the map, it can sometimes get boring seeing the same bus in a different location a hundred times. But when there are two of your friends on the trip rolling around with you, even the blandest adventure becomes fun.

Another issue I have noticed is that there is an imbalance in the difficulty spike, and some bosses definitely seem unfair to take on solo. On top of that, almost all of the bosses seem to spawn endless waves of minions, making even the starting bosses feel like raids. Try hitting a teleporting wraith that can make you bleed while being hacked at by angry potato minions wielding axes.

Thankfully, the difficulty put in place here isn’t too punishing. You’ll die, a lot. But difficulty never reaches the point where it feels entirely unfair, especially in co-op. Dying doesn’t have any negative impact except causing all the enemies to respawn. Your character can adapt to most of the difficulty spikes as you obtain new weapons and gear. Remnant’s character progression system is one of the best as it allows you to experiment without the risk of making a bad investment.

I really enjoyed the varied enemy design that meshed so well with the environments, which is all the more impressive when one considers that these levels haven’t been designed by hand. Almost all of these monsters were unique and had different attacks and strengths. The humanoid cleaver-wielding creatures that I fought in the cities were vastly different from the swamp monsters that I fought in the Forest world. Remnant’s worlds are much more robust and intricate and seem to have their own hidden secrets that you probably might not even notice the first time around.

The game is also designed to be endlessly replayable. You can not see everything the game has to offer in one playthrough. Only ~45% of the game’s content will be experienced in a single playthrough and subsequent playthroughs won’t necessarily provide every experience you missed. Also, bosses will drop different loot and sometimes more than one loot based on how you tackle them.

The tutorial vaguely introduces you to the world or what’s left of it. You learn that in the 1960s, scientists found a mysterious rock and that an evil force, invaded the earth and decimated the population, and you are chosen to be the savior of mankind by defeating the root. 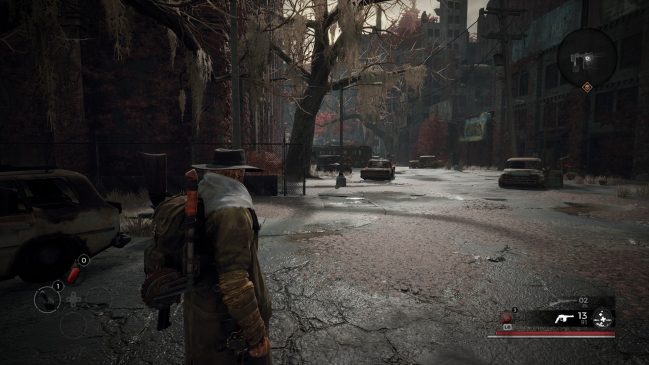 Ward 13, the place where you are taken after a narrow brush with death serves as the hub where you’ll shop, chat to NPCs, upgrade your gear, and so on. Maps are interconnected and often you will open shortcuts leading to the place where you started or entirely new paths with possible sub-stories and bosses.

The story is not really imposed, because the majority of the lore is found via notes dotted around everywhere in the world. Loading screens also drop cryptic verses and hints to the bigger picture. Some of the random encounters and connecting the dots reveal an influence of elder knowledge and Lovecraftian themes that quite surprised me. I am thoroughly impressed with how Gunfire games managed to make an original world with deep lore for a AA game.

The place where the writing falls flat is the NPC dialogue which is mostly grunts and looping comments. Thankfully the writing behind the lore spread throughout the world, and attached to items, is very well done.

Not A Pretty Picture 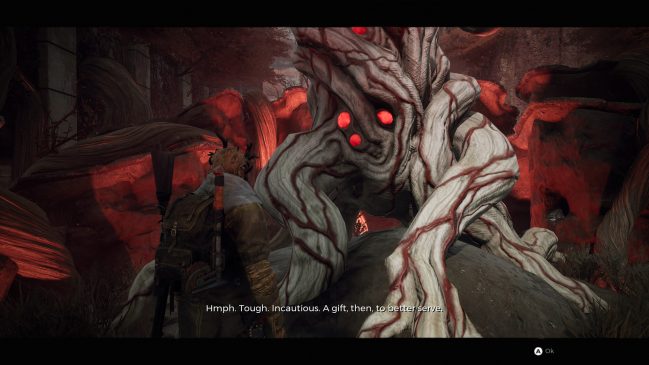 Visuals aren’t really Remnant’s strongest suit. The world does feel gorgeous at times but after the first few hundred times of seeing the same tileset, it starts to become bland and boring. Assets feel recycled and reused too often but enemy designs are unique and well done. The game looks alright and isn’t bad for a soulsborne but my god, the NPC faces look like they are straight out of the last generation.

And while weapons and armors behave differently, they seldom look the same except for a couple of unique drops.

Remnant From The Ashes starts off slow but starts picking up pace and delivers an original world that had me surprised. While it’s certainly taken some inspiration from multiple genres, it still delivers a strong package that is incredibly enjoyable and rewarding.