After six months of some drool-worthy PlayStation 5 exclusives, it’s time to return once again to one of the most amazing classics that have ever graced the platform – Ratchet and Clank! Developed by Insomniac Games, the series is a popular name in every console-loving household with the lovable Lombax, Ratchet, and his best friend, Clank embarking on an adventure spanning galaxies, to save the world from the evil Dr. Nefarious. And with that, let’s have a glimpse into what the latest addition to the series – Ratchet and Clank: Rift Apart brings to the table! 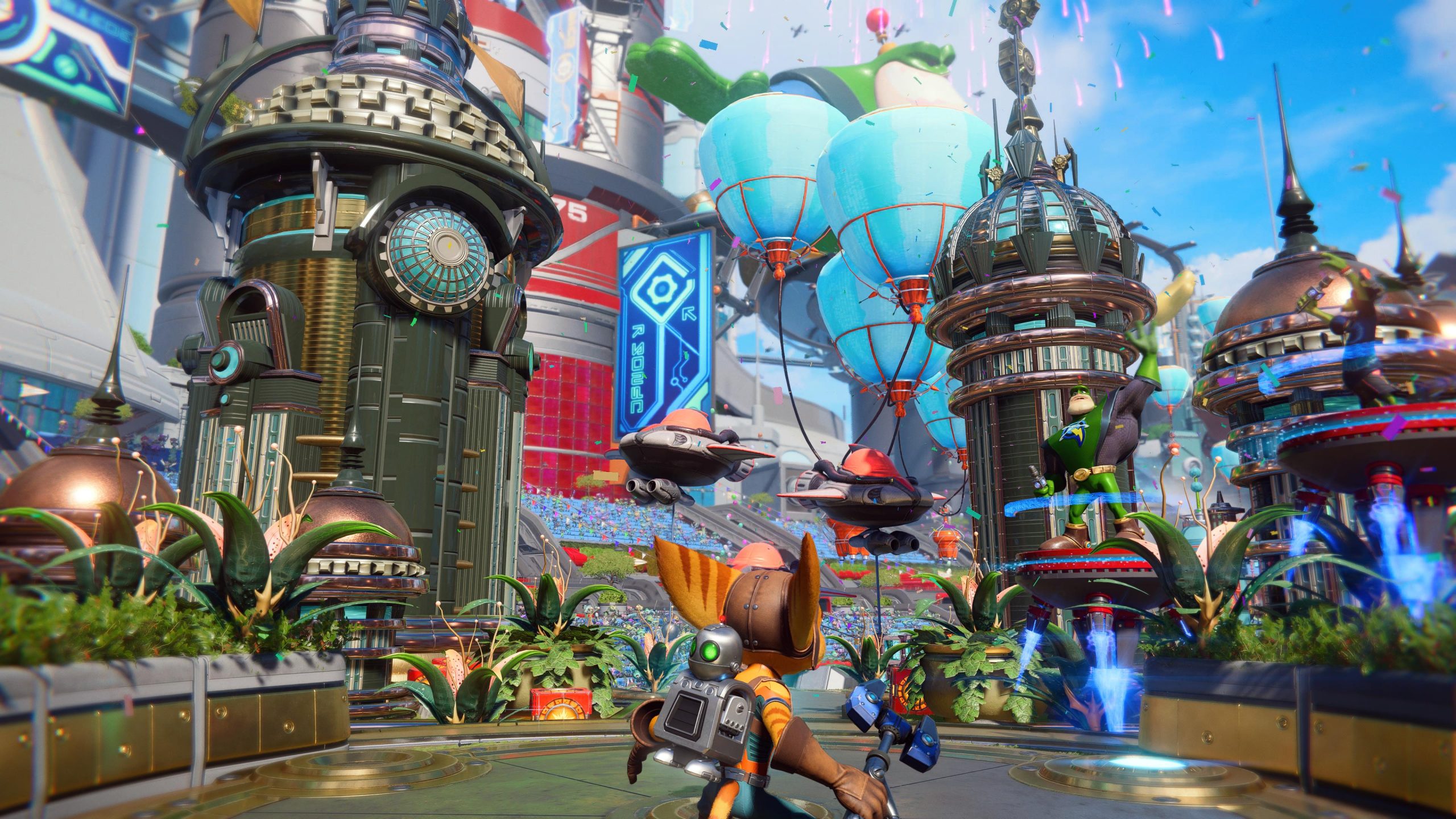 If you have already played the previous games, you probably know that the series is about the adventures of a heroic Lombax (an alien fox-like creature) called Ratchet and his robotic sidekick, Clank. It’s been quite some time since they saved the world in the last game, and their renown has spread quite far as heroes, to the extent that the people of their planet decide to throw a huge party in their name. Clank gifts Ratchet a device called the Dimensionator, through which Ratchet can travel to multiple dimensions. However, the evil Dr. Nefarious manages to get hold of the device, through which he manages to travel to an alternate dimension where the world is ruled by a stronger version of him, Emperor Nefarious. 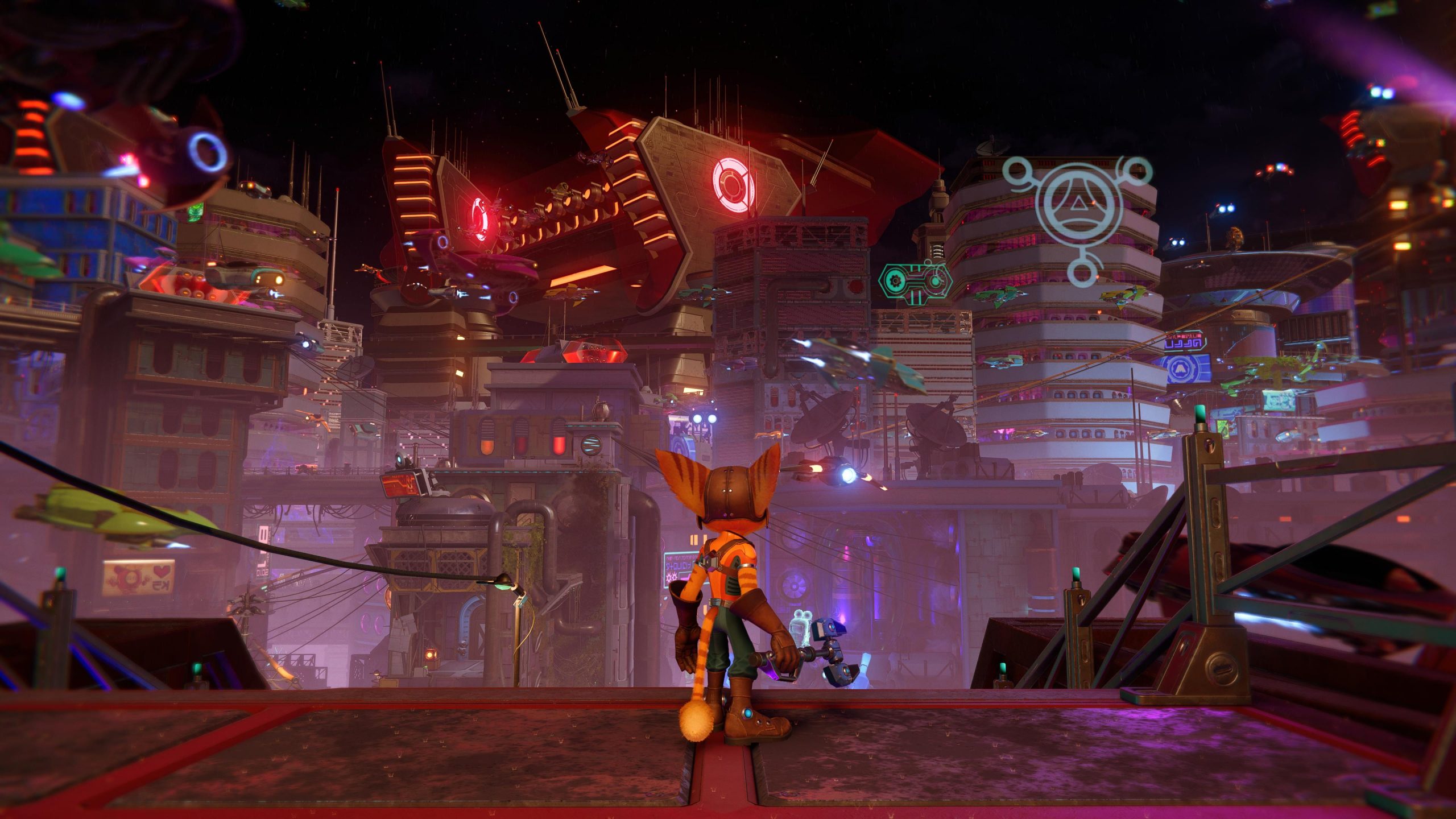 Ratchet and Clank follow him but they land up in separate places, though each with the same goal – to meet each other and save the world. Ratchet’s counterpart in the alternate dimension, a female Lombax called Rivet leads the fight against Nefarious, and what follows is a wonderful adventure where the heroes travel to different planets and different dimensions, hoping to defeat Nefarious once and for all.

Each of the multitudes of areas in the game is beautifully designed and once you start the game, the fact that it represents a next-gen creation jumps out at you. The graphics are crisp and clear, and the environment is densely packed. Right from the get-go, you end up in a bustling city, filled with all kinds of aliens, humming machinery of factories, and crowded clubs and pubs at locked 4K 30 FPS, with two different performance options. From there, you travel to lush green forests filled with dangerous fauna, a desert-like area where you can surf around, snowy cities, pirate coves, and lots more. 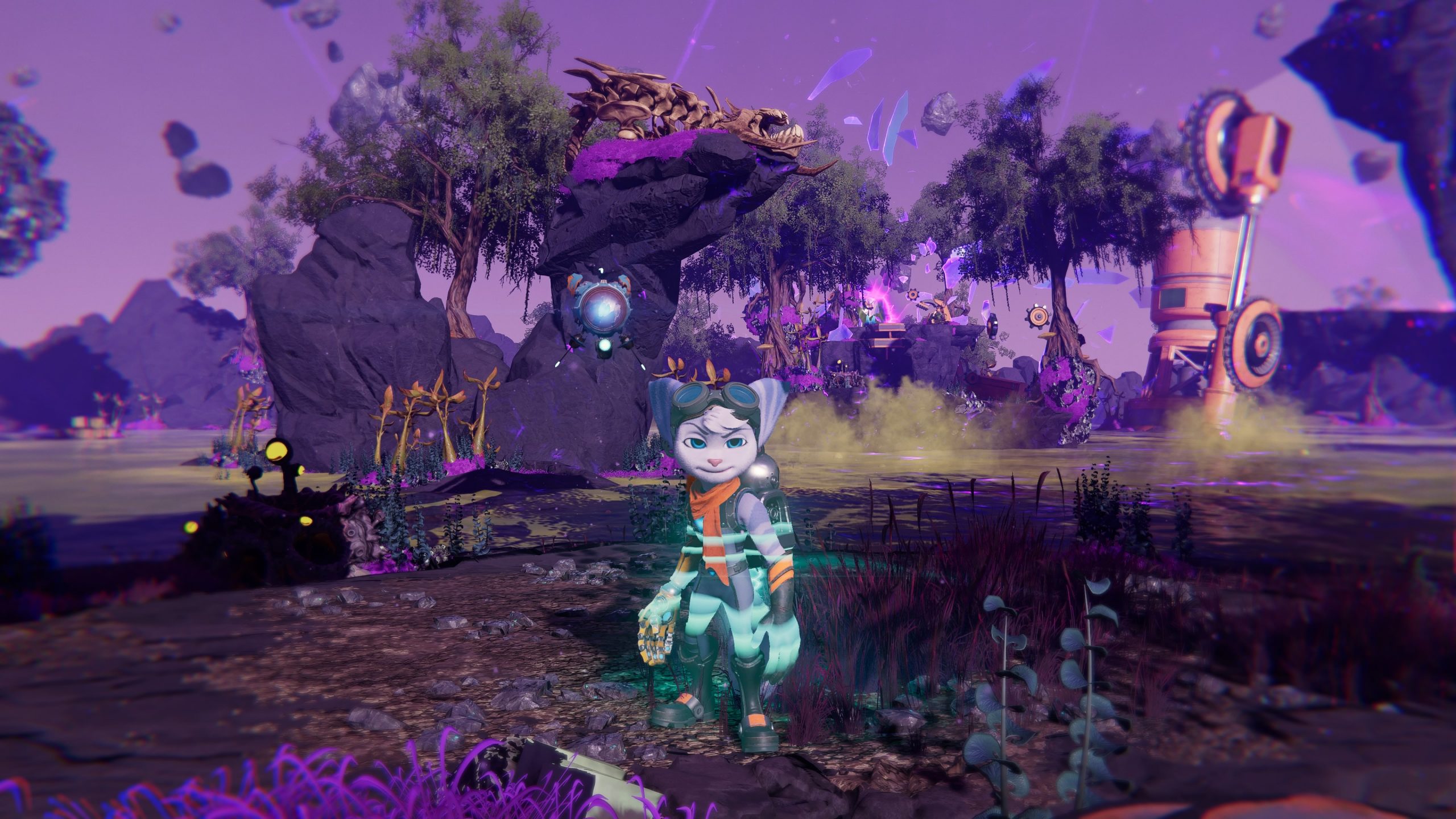 What makes it even better is the fact that every once in a while, you get the option to travel to alternate dimensions where the same level changes drastically, providing an absolutely new experience. With the PlayStation finally using an SSD, the game takes only a few seconds to get started, and there are almost no load times at all. 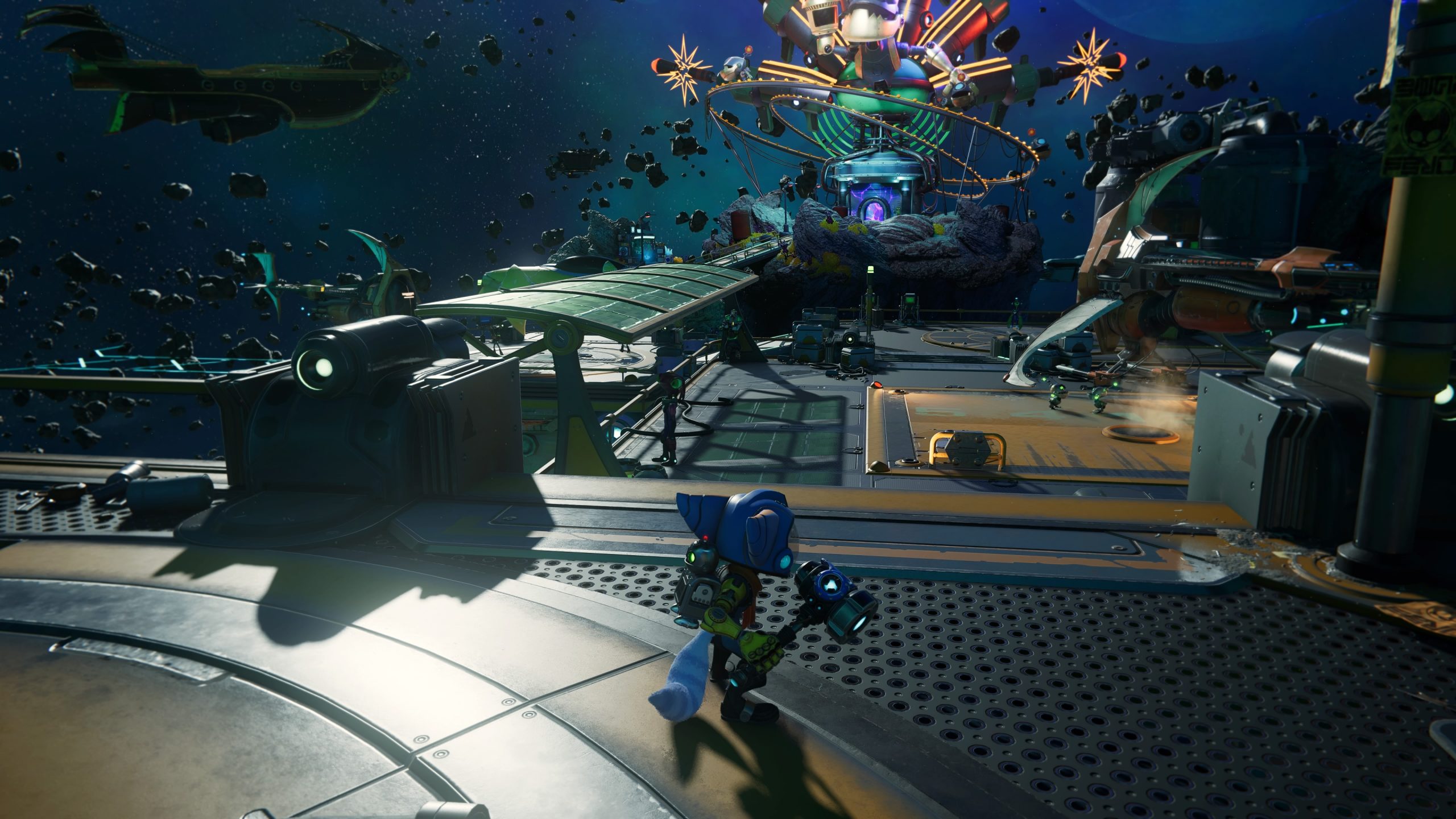 Ray tracing is beautifully implemented and whether it puddles on the ground, water bodies, or the eyes of our Lombax, the feature is implemented extremely realistically. Each of the characters is well designed and it feels less like a game and more like one of the best Pixar animated movies ever created. 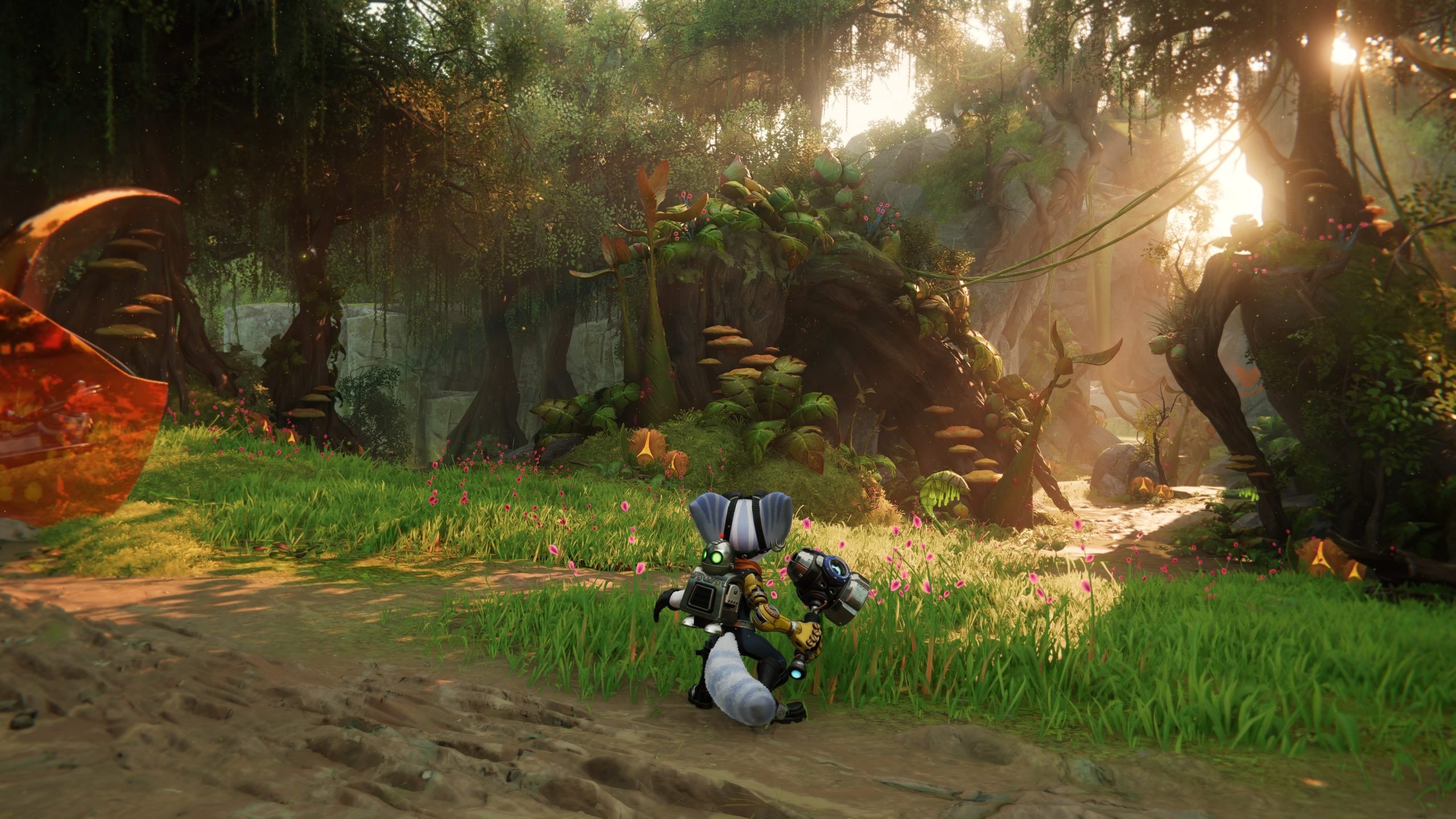 The game gives us three settings for graphics – Fidelity – in which the game plays at a stunning 4k with an optimized 30 FPS with Ray Tracing and increased scene density, Performance, in which the game plays at a slightly lower resolution with Ray tracing settings off, but this time with a smooth 60 FPS. But the best mode of all the three is the Performance RT in which the resolution is further reduced, along with decreased scene density and decreased lighting, but it includes Ray Tracing along with a smooth 60 FPS. That is perhaps the best setting for this game, where we enjoy both the amazing graphics the game has to offer us, especially in densely populated cities where Ray tracing pops out while rendering the neon glows and water puddles, as well as the locked 60 FPS framerate which makes the gameplay and combat really fluid. Below are some images for comparison, starting with Fidelity and then Performance RT and Performance from left to right.

Ratchet and Clank have always been third-person action platformers, but it has never felt as fluid as the latest addition to the series. Ratchet has his signature Omni-Wrench to turn cranks and bash enemies up alike, but, as is typical, he has the option to buy tons of weapons, and in almost no game before have they been so different from each other. 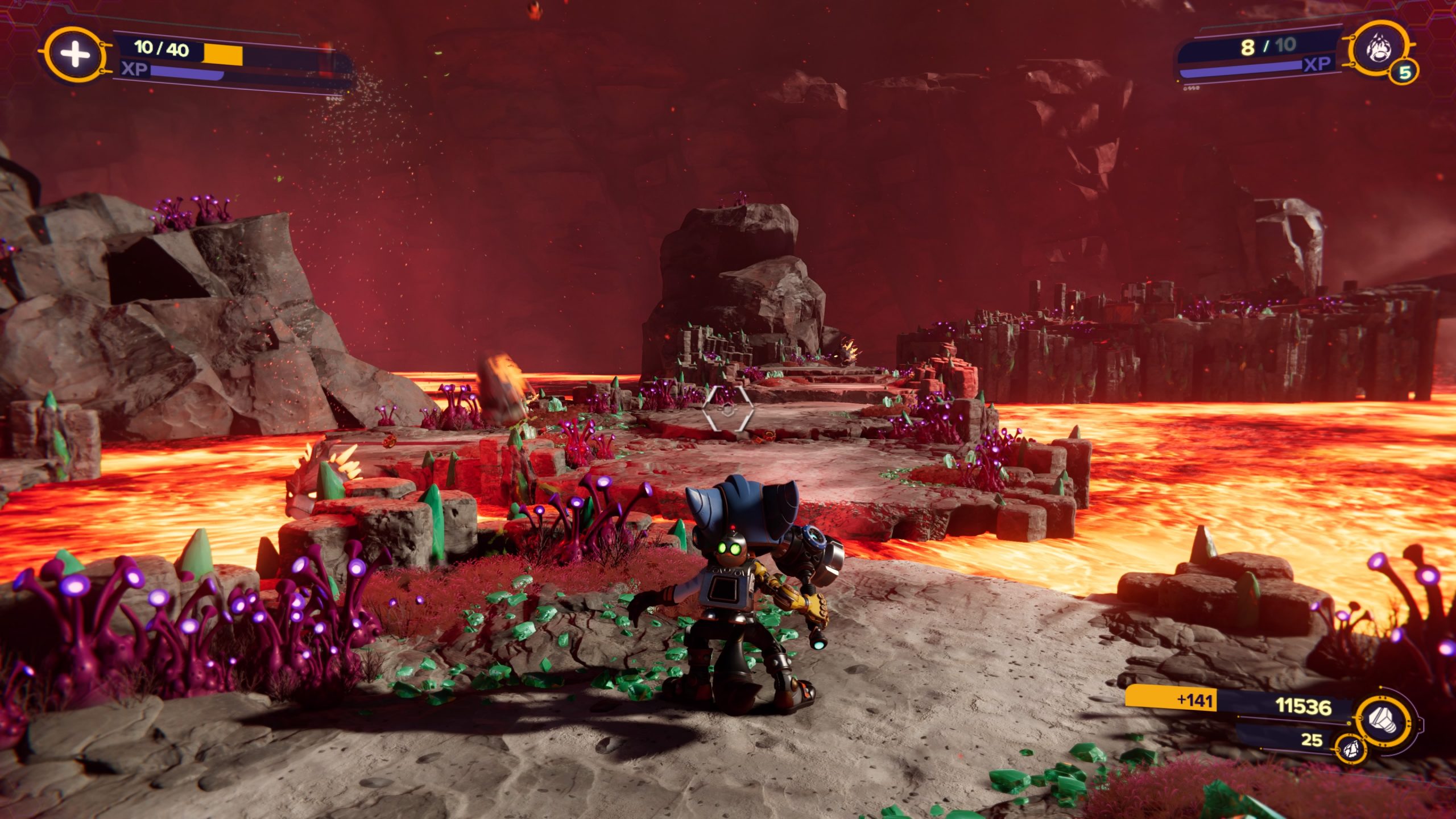 For example, there is the Topiary Sprinkler, which converts enemies, however large they are, into giant immovable plants temporarily, while you annihilate them, Mr. Fungi, a rather petulant fungus, who damages your enemies when summoned, the Buzz Blades which throw tons of ricocheting blades which keep bouncing off enemies, while constantly attacking them and the Gloves of Doom which release DoomEggs filled with small minions who bite into the nearest enemies they see. These are just a few of the plethora of weapons that are available to us, as we go on our adventure. 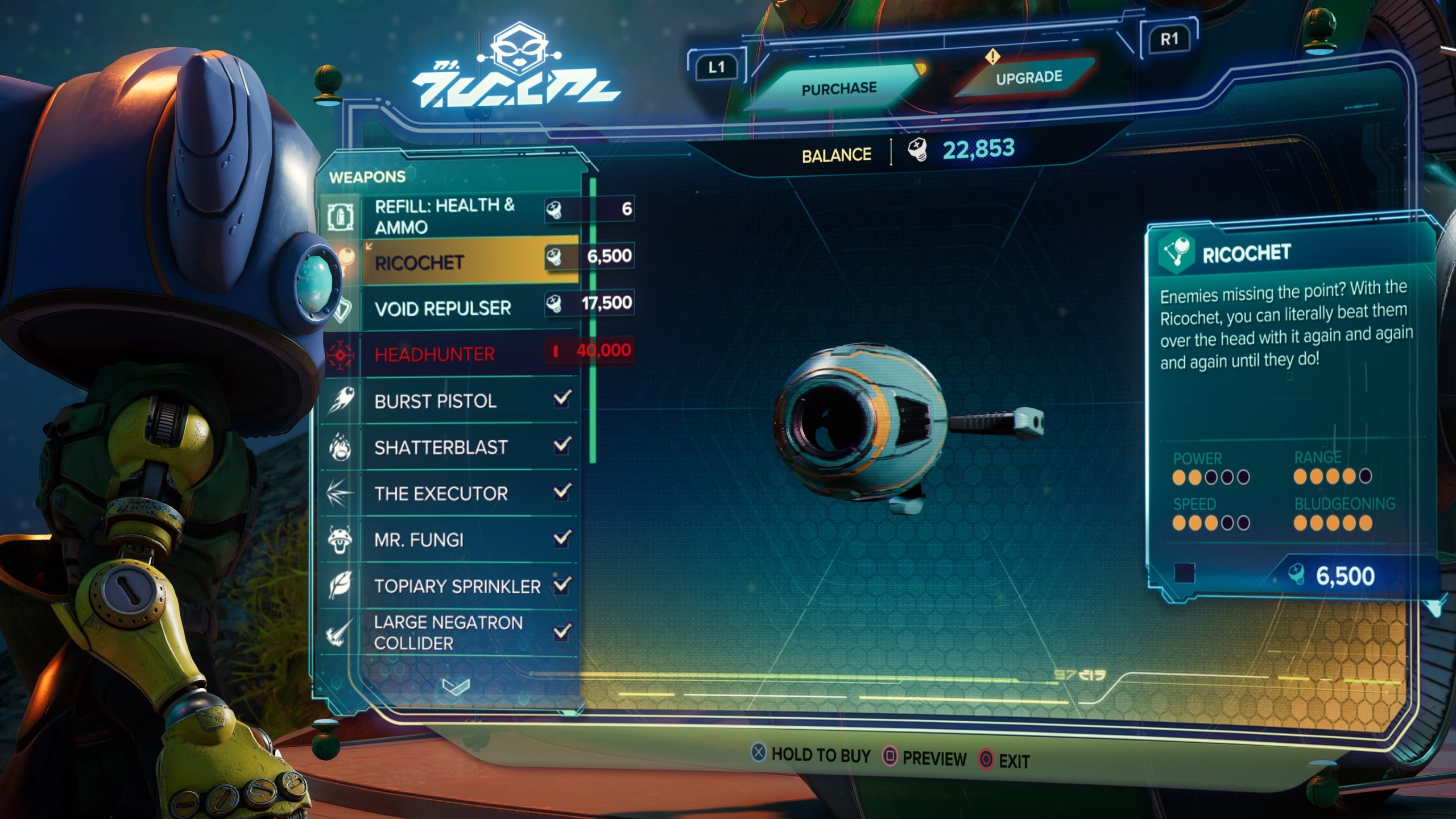 The movement is extremely fast and the parkour is quite good, with Ratchet grinding on rails that keep falling apart, forcing him to stay on his toes, wall-running with his new boots, and zipping across to alternate dimensions where he makes his way through obstacle courses for rewards at the end. The prizes are generally armor pieces and the game has quite a lot of armor sets, each having pieces that grant separate stat benefits to the player, whether it be an increase to melee damage or some resistance to certain enemy types. 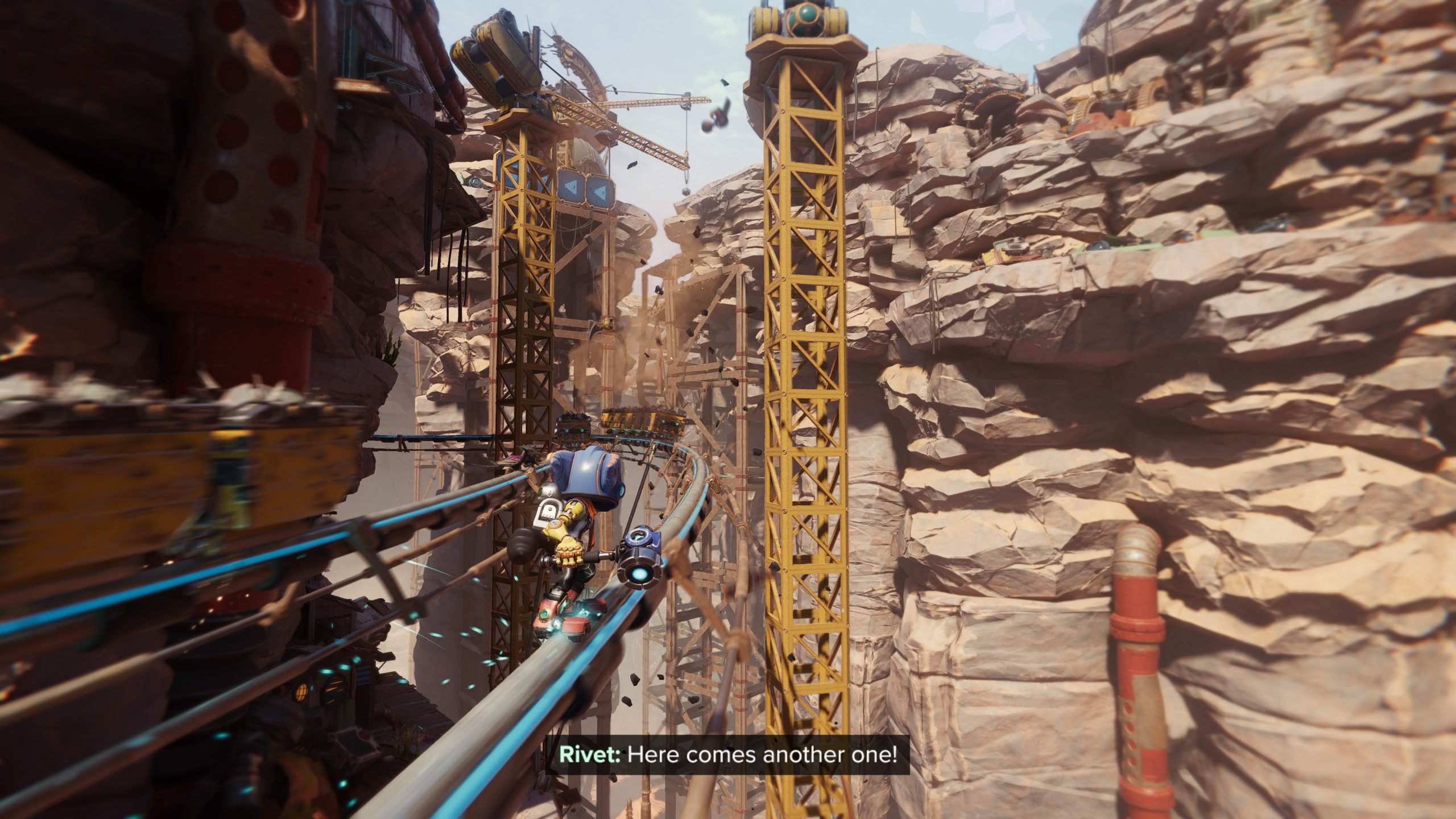 The levels are littered with collectibles and easter eggs, and side missions are aplenty. However, they are a bit taxing as most of them end up asking you to find all of a certain type of collectible in each level. That being said, traversal is often fun and you gain a variety of mounts in some planets to help you on your way, from a dragon breathing fire to bugs letting you ride on their backs as they speed through marshes. 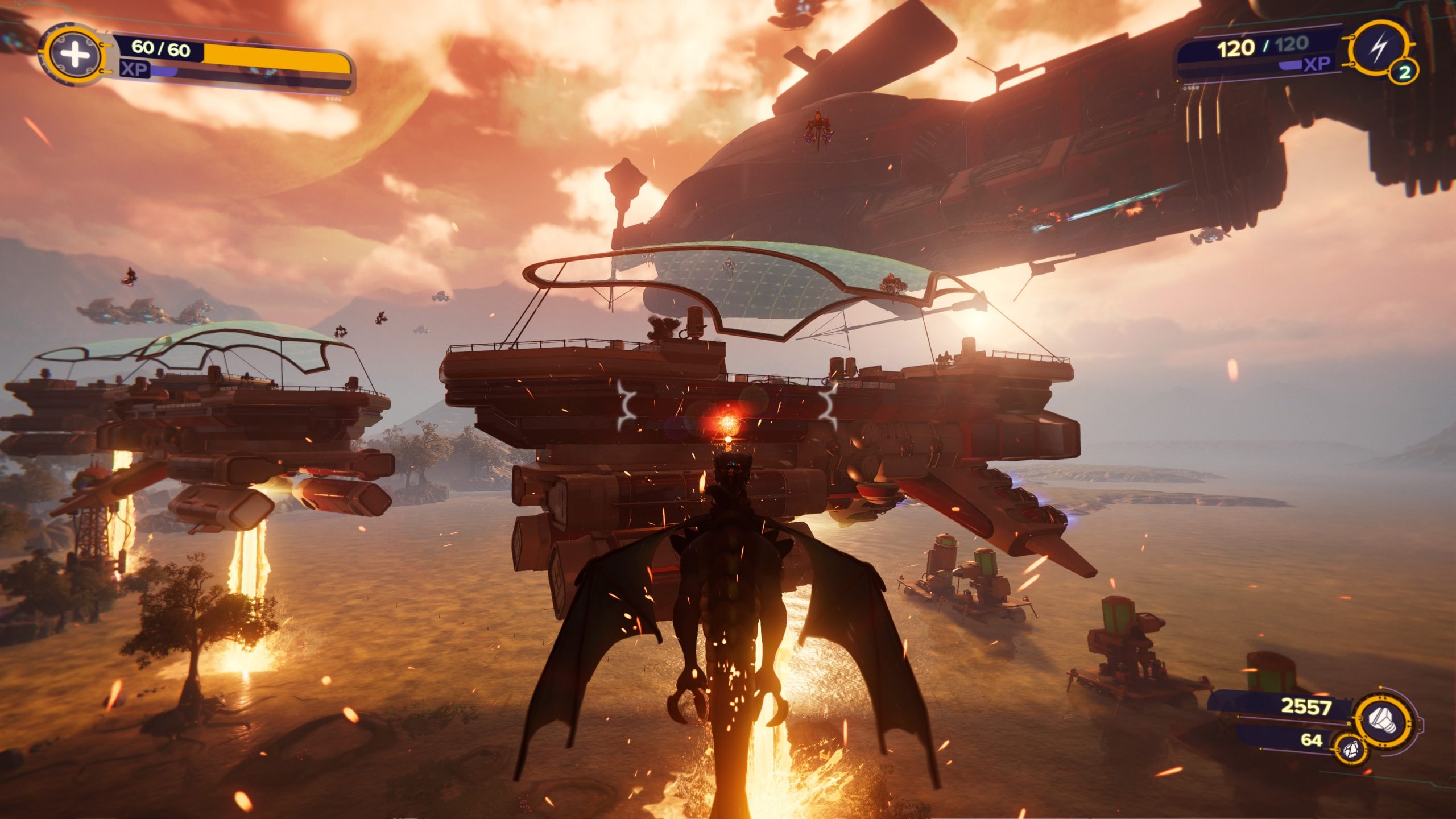 There is a lot of different variety of enemies but the game does a somewhat poor job with respect to minibosses, as they keep giving us the same few varieties of robots and dinosaurs as minibosses throughout the game. That being said, the boss fights are pretty fun (although easy) and the script is amazingly written with dialogues that are bound to crack you up. 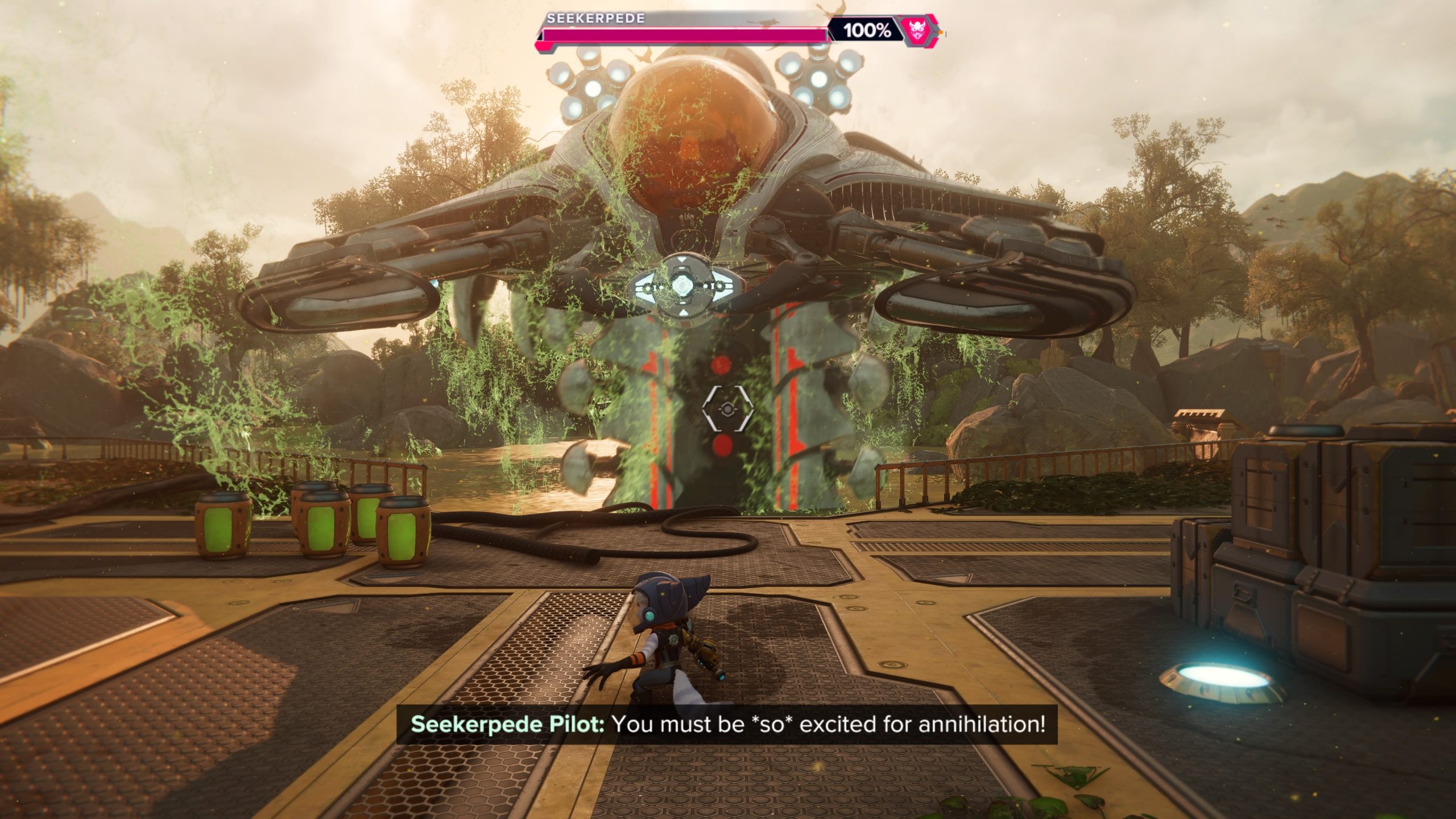 Defeating enemies feels rewarding as that, as well as damaging conveniently placed crates keep giving you nuts and bolts as they disintegrate, which can be used to purchase new weapons from the vendor, Mrs. Zurkon. Resources are available in plenty to upgrade the weapons as well, and the upgrades make weapons vastly stronger, as new buffs are added along with the traditional increase to ammo capacity and damage. 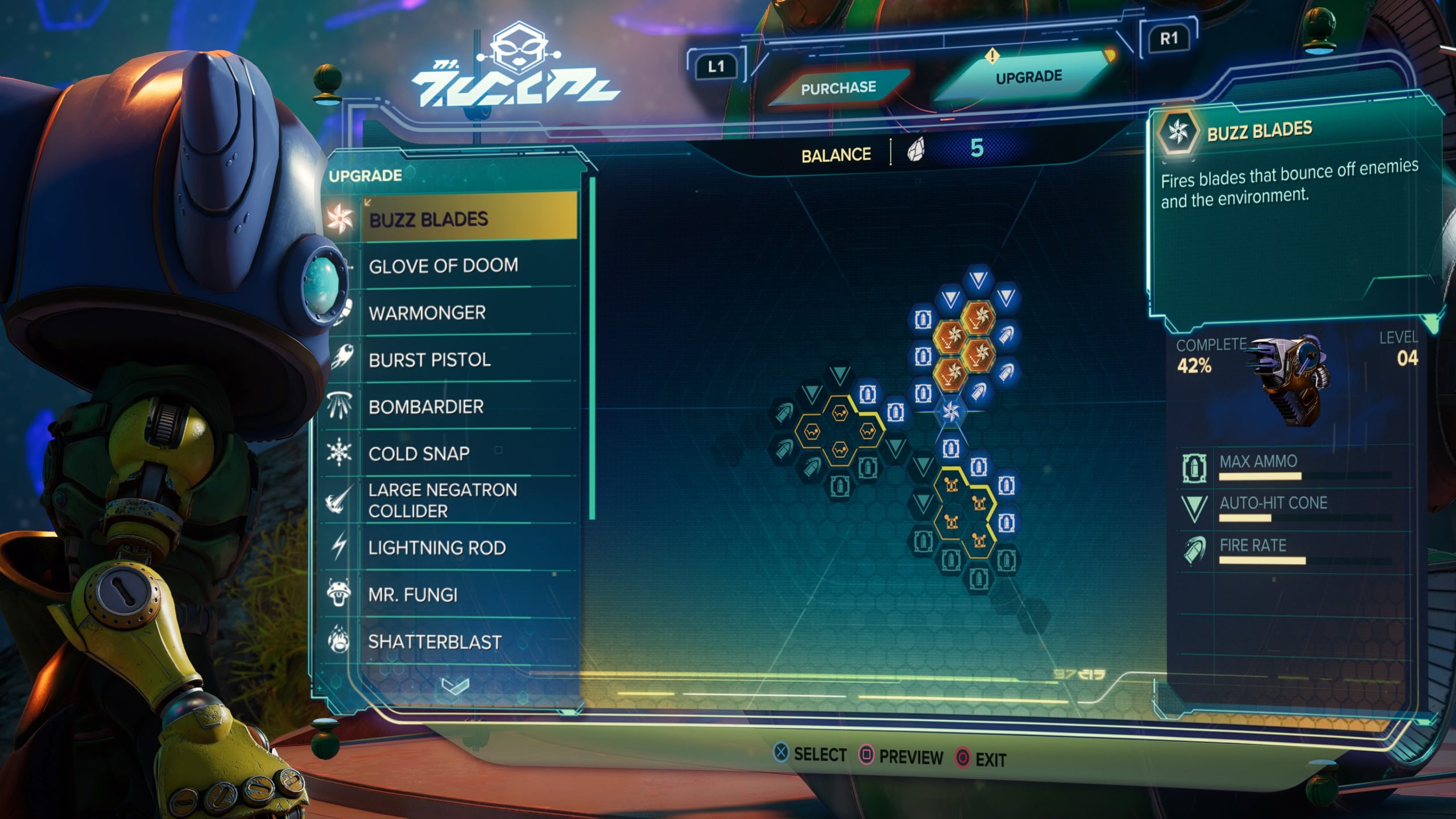 The game has an arena mode as well, which features survival, combat, and parkour challenges in levels ranked in order of difficulty. Completing them nets you a prize but each of them requires payment of bolts and losing leads to them being forfeited. However, the Arena is a level you can come back to after you are overpowered and the game is over. 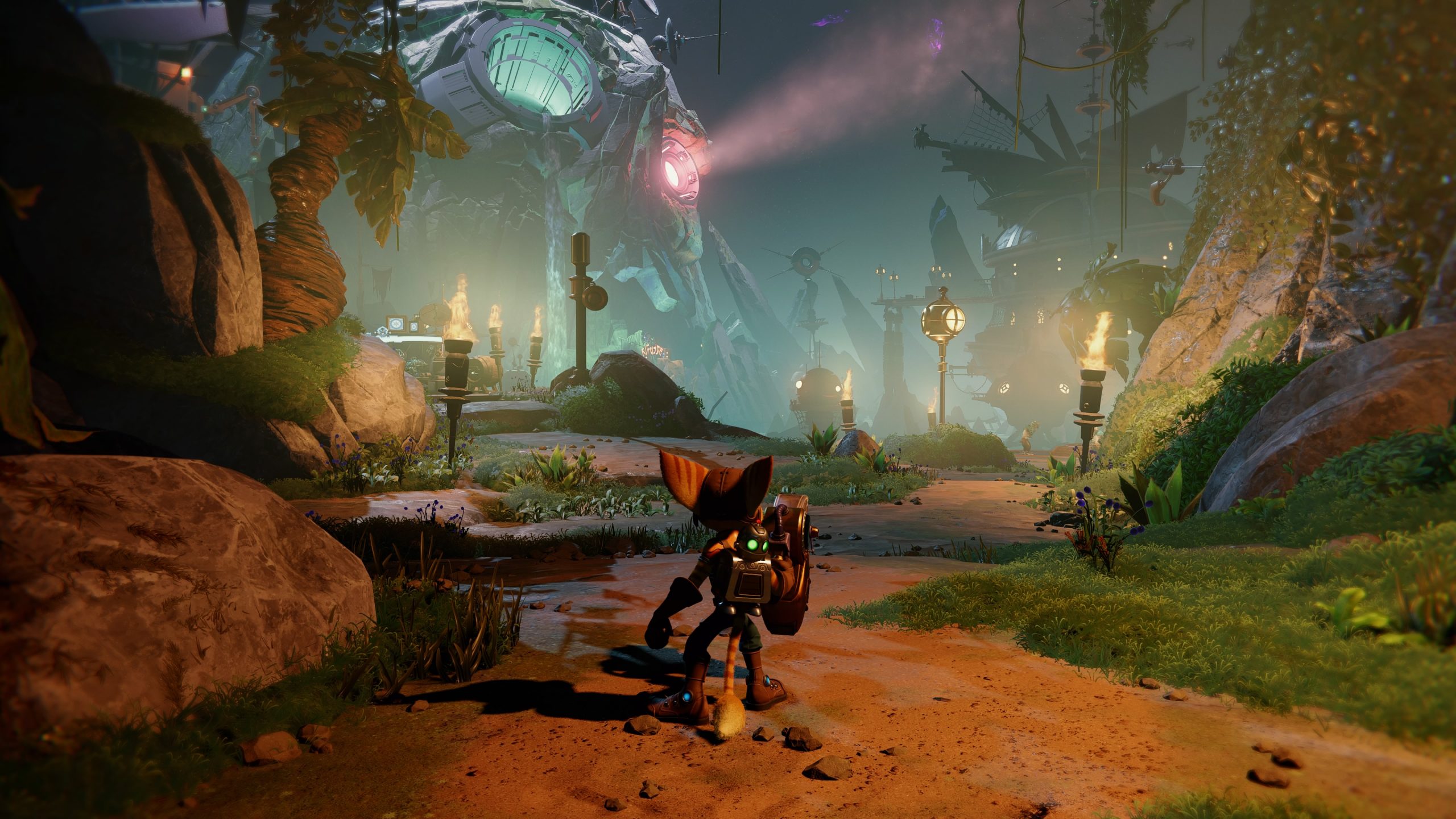 Additionally, Clank has certain challenges in an alternate plane which are invariably puzzles that are pretty delightful. There are also minigames, where Ratchet’s newest companion, a software called Glitch, goes into virus-infected control panels to eliminate the viruses and clear the path for Ratchet. All these minigames, coupled with the delightful soundtrack, simply add to the flavor of the game and make it even better, if that is possible. 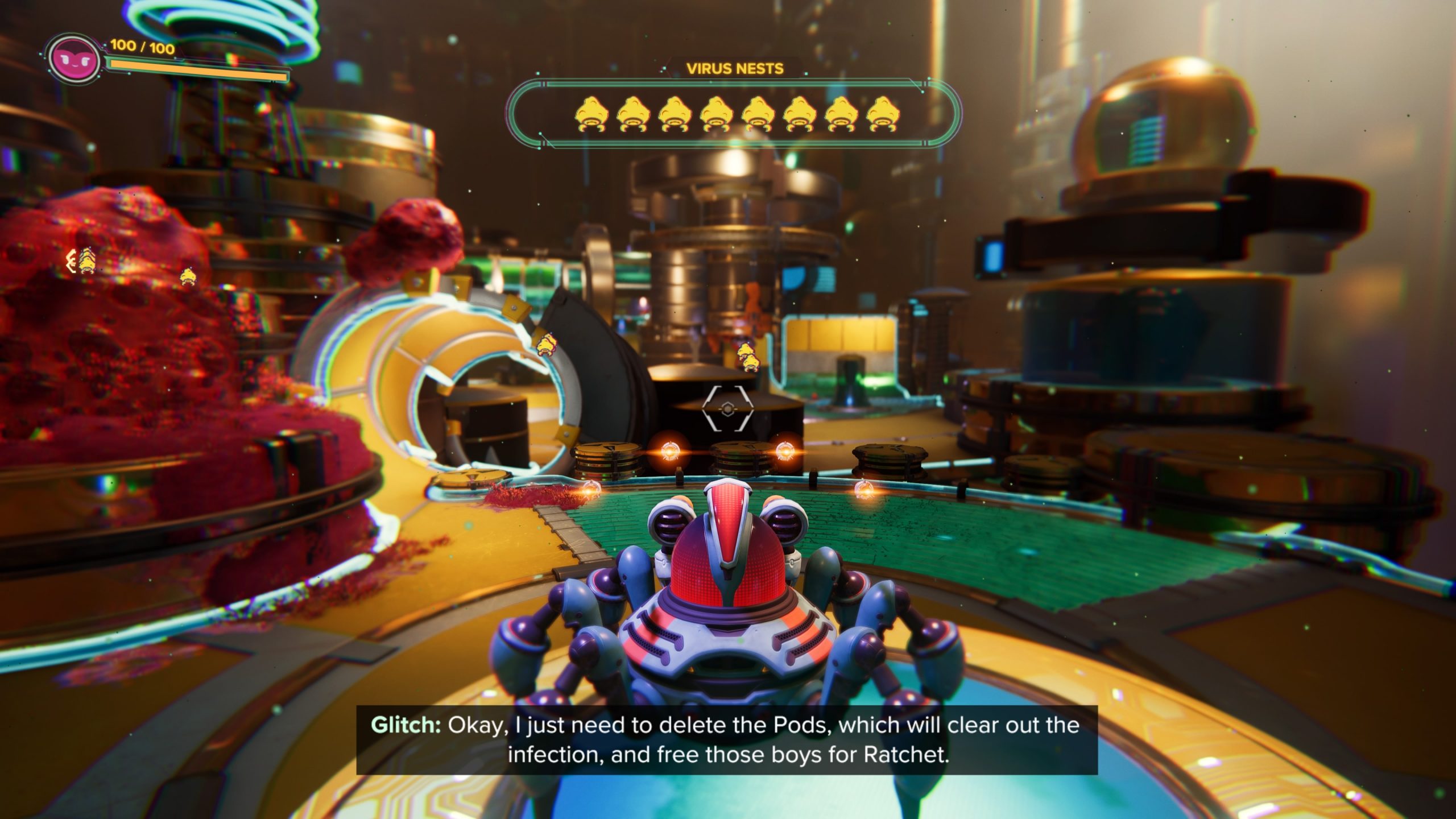 The game does an exemplary job of showcasing the new PlayStation controller – The DualSense. While there are a plethora of weapons to use, the haptic feedback of the new controller helps to differentiate between them, with bombs carrying a separate weight as compared to the staccato of the machine guns. The movement also changes the behavior of the controller, and the player can literally sense the metal surface of the rails as he grinds on them, as well as the clash when he bashes the enemies with his hammer. Whether he’s gliding, strafing, shooting, or wall-running, the DualSense acts as a companion to the audio, enhancing the experience in a way that heralds the fact that next-gen gaming is here. 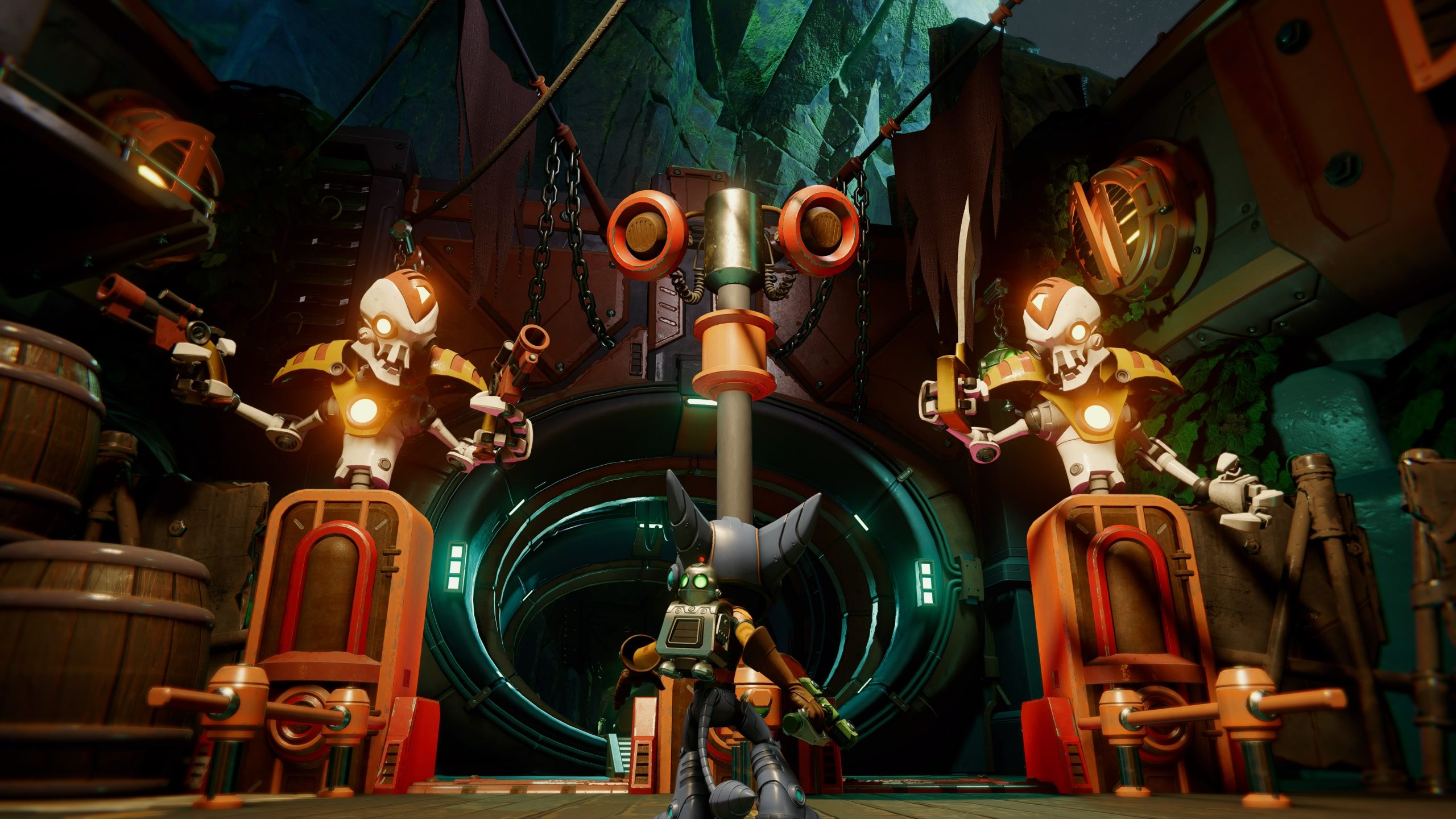 Ratchet & Clank comes with the usual photo mode as well with the standard controls used for taking some breath-taking screenshots such as the one below:

Disclaimer: Review copy provided by Sony India. A huge thanks to them.

Ratchet and Clank: Rift Apart is a wonderfully designed game that will wow kids and adults alike with its stunning graphics, fun gameplay, and hilarious dialogues. While people who are no stranger to the series might find it more of the same but it is more than welcomed when a game is as good as this is. Uniquely made weapons and the way the developers have shown the same worlds in different ways in alternate dimensions, each with their own story, makes the game a worthy example of the magic Insomniac weaves with every one of their creations. For the Price tag of 4999 INR here in India, it is definitely on the expensive side, but if you have purchased the PS5 for its first-party exclusives then rest assured, your money is going on the right hands and you are going to certainly enjoy your day one purchase.