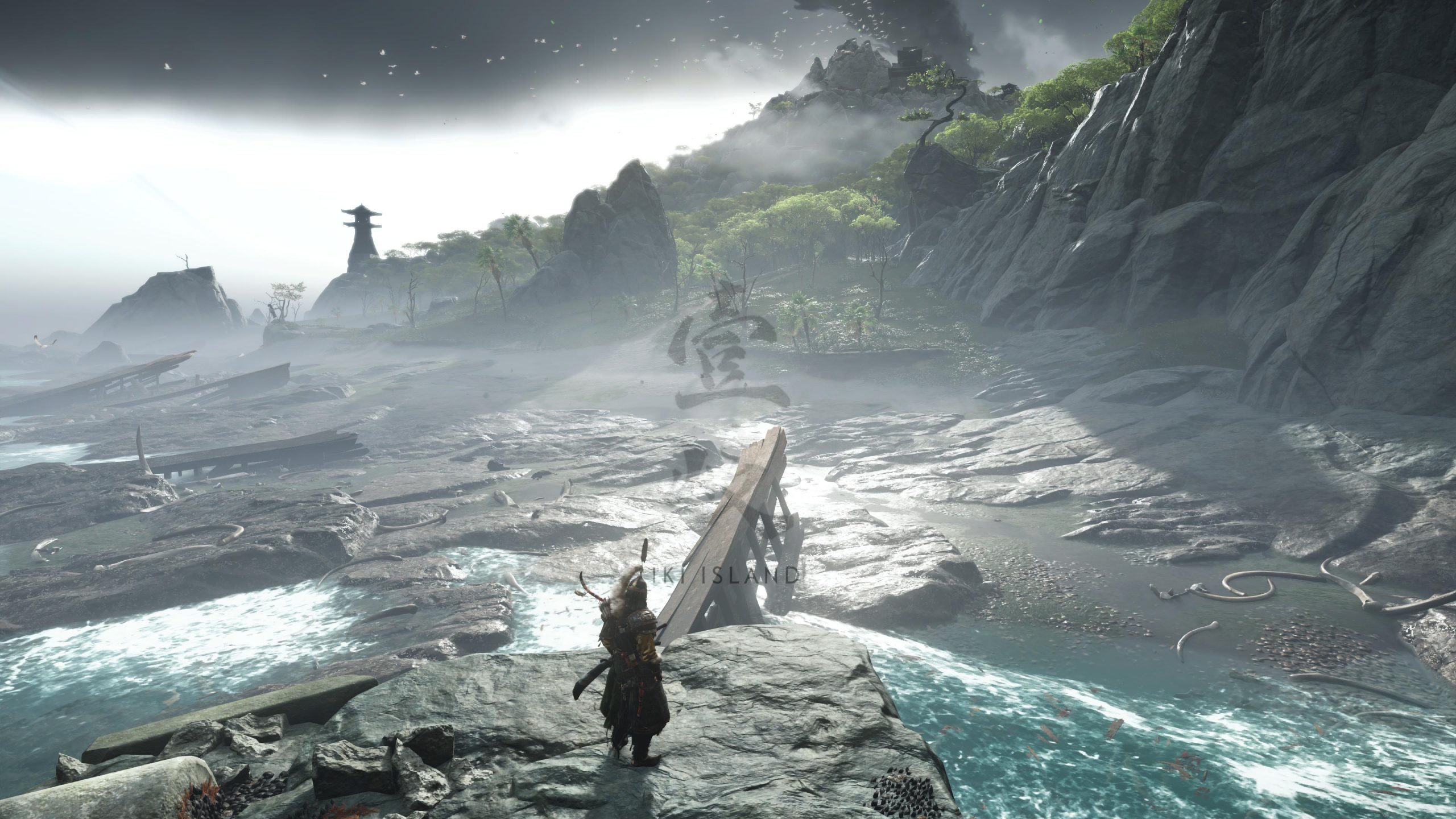 Ever since its release a year back, Ghost of Tsushima has quickly risen to become one of the best RPGs based in a Japanese setting. The game had managed to infuse both violence, where samurai warriors and Mongols came together with a clash of steel, and serenity, where the player could just sit back while composing haikus or stroll through the countryside of Japan listening to the melody of his flute. It came as no surprise when their DLC, Iki Island quickly became the subject of conversation for gamers after the announcement. However, how does the new DLC play out? Let’s have a look. 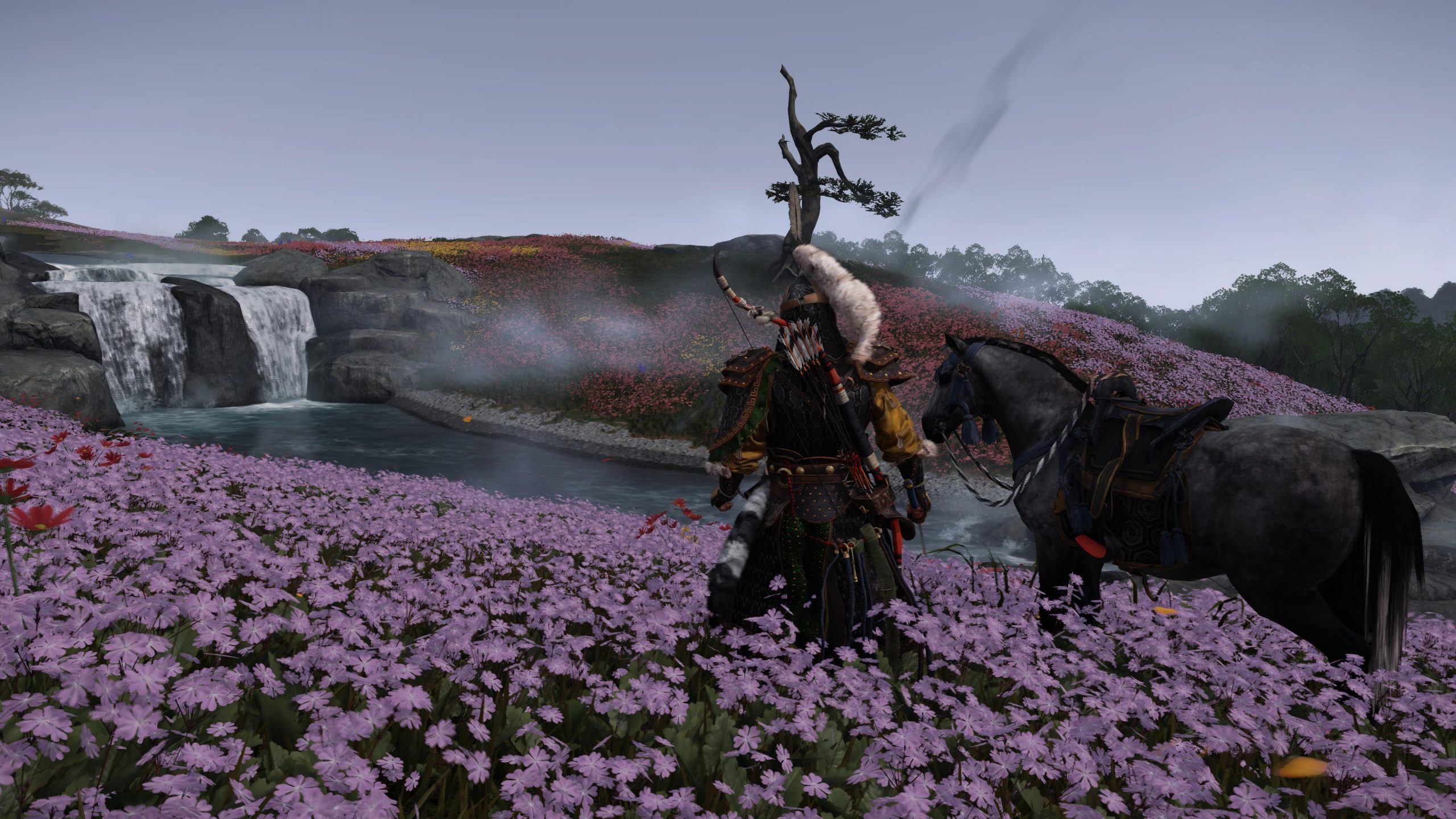 The DLC can be started as soon as the player has finished Act 2, and it shows the protagonist, Jin Sakai coming across some peasants in Tsushima who have started losing their sanity after having been forcibly fed a potion by Mongol invaders. Fearing the safety of his island, Jin decides to take matters into his own hands and sets off for the island of Iki where the Mongols have come from. But soon after, the story takes a dark twist after he himself is captured and forced to consume the same poison. He comes out alive but his mind is now clouded by his past and he keeps getting harangued by visions of his father’s death. 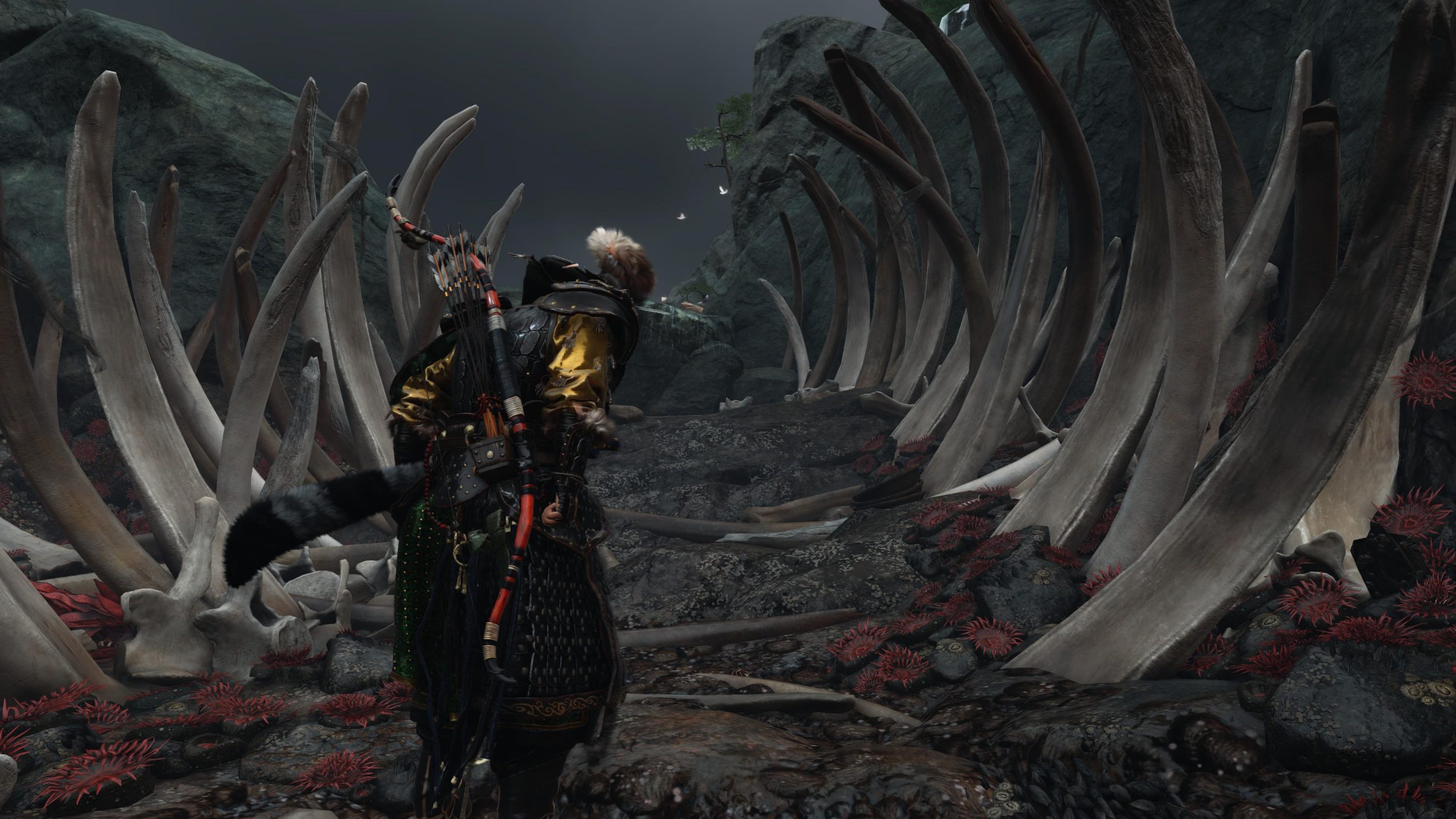 The DLC mainly focuses on Jin Sakai as a person, how he faces his own devils and wages a war against the Mongols simultaneously. But while Tsushima was a place where samurais were seen as rulers and saviors, Iki Island is populated by raiders who went against the samurai in battle and even killed Jin’s father. A hostile location albeit clad with the beauty of Japan is, Iki Island provides a fresh place for a 4-hour campaign, which takes around 17 hours if you choose to do everything. 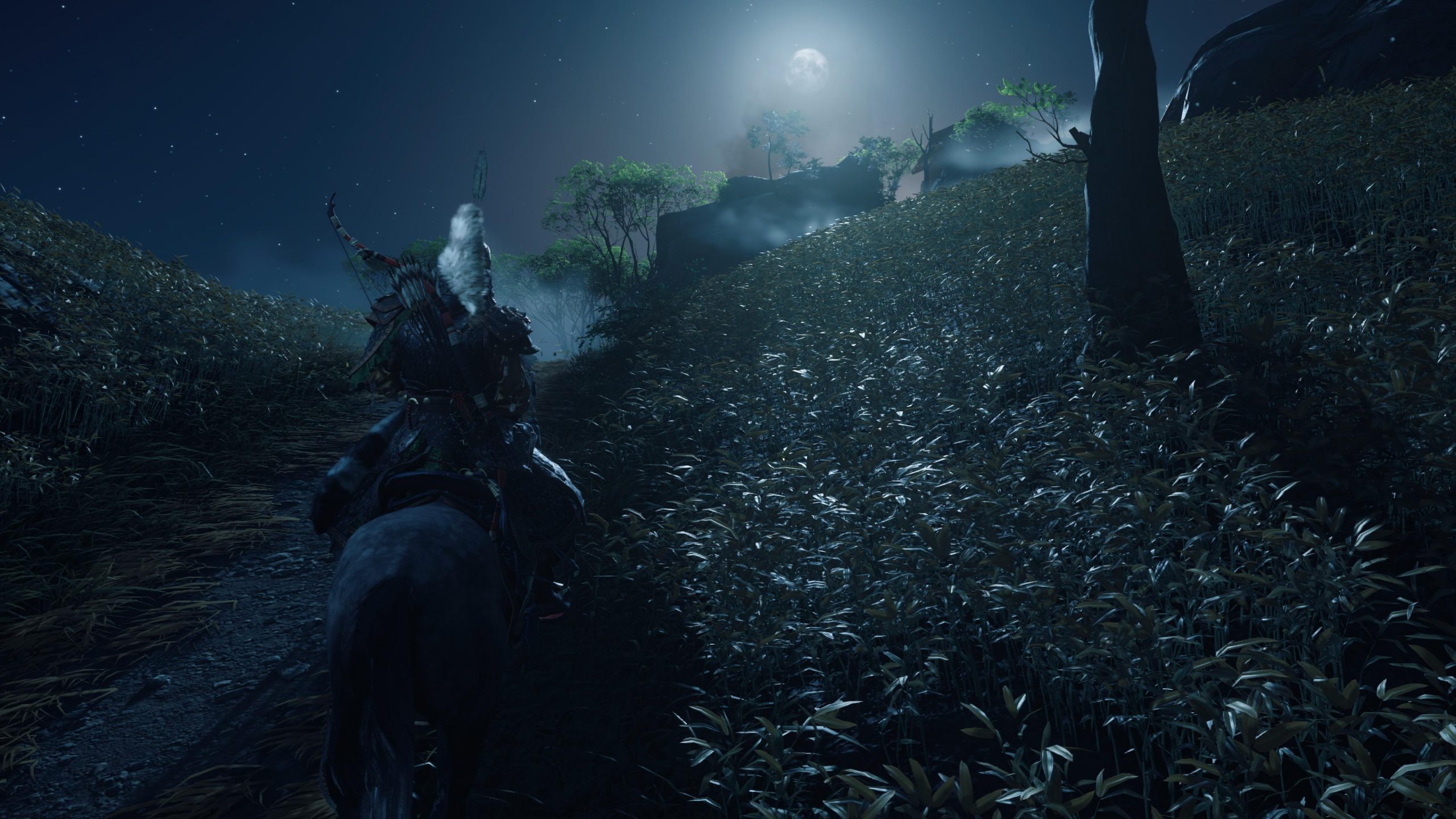 The new Director’s Cut has the game running at a locked 60 FPS on the PS5, as compared to the 30 FPS on the PS4 Pro. The game has not received a major overhaul in terms of graphics but the textures are definitely better and the landscape feels more vibrant. The way the grass blows with the wind, the swirling mist around the sea coast – everything shows how much the game has been improved for next-gen. And while the game has added certain features such as the character’s lip-syncing to Japanese, one of the most notable improvements is with regards to load times. There is hardly any loading screen and Ghost of Tsushima fully utilizes the power of the SSD to provide a fast, seamless experience. Also, while the game has not implemented RTX yet, reflections have been improved a lot especially considering the multitude of variously hued water bodies scattered throughout the island. 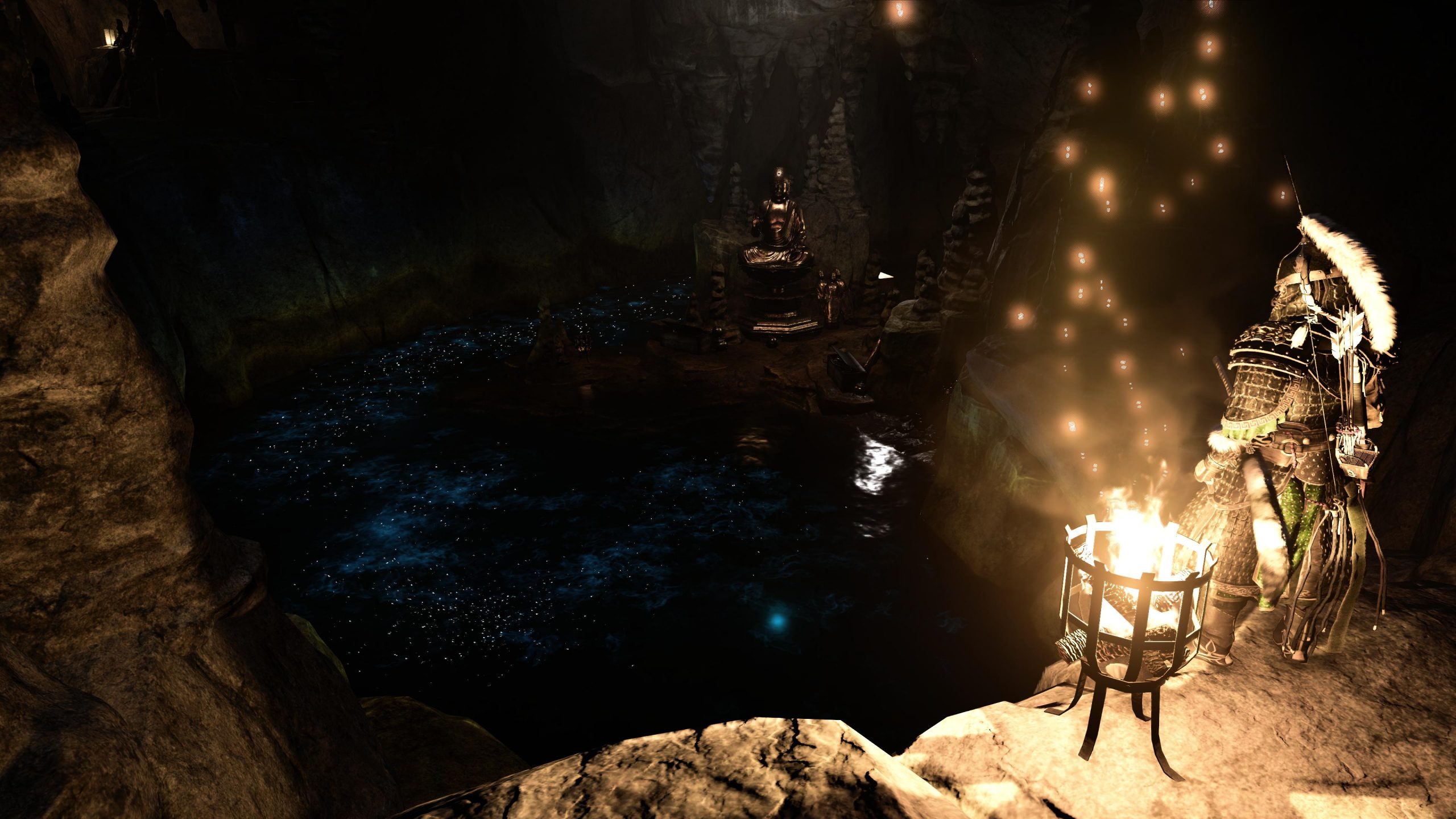 Perhaps the most significant improvement, however, is the utilization of the haptics of the DualSense. One can literally feel the tightening of the bowstring, the clash of steel, and the jerk of impacts when Jin’s horse collides with enemies. The motion sensor has been fully used in different puzzles and side activities which we will discuss a bit later. However, I found myself turning off or decreasing the intensity of the haptic feedback because it only slows down your combat when you try to fire arrows into a crowd of enemies, only to find out that you have to go into a wrestling match with your L2. 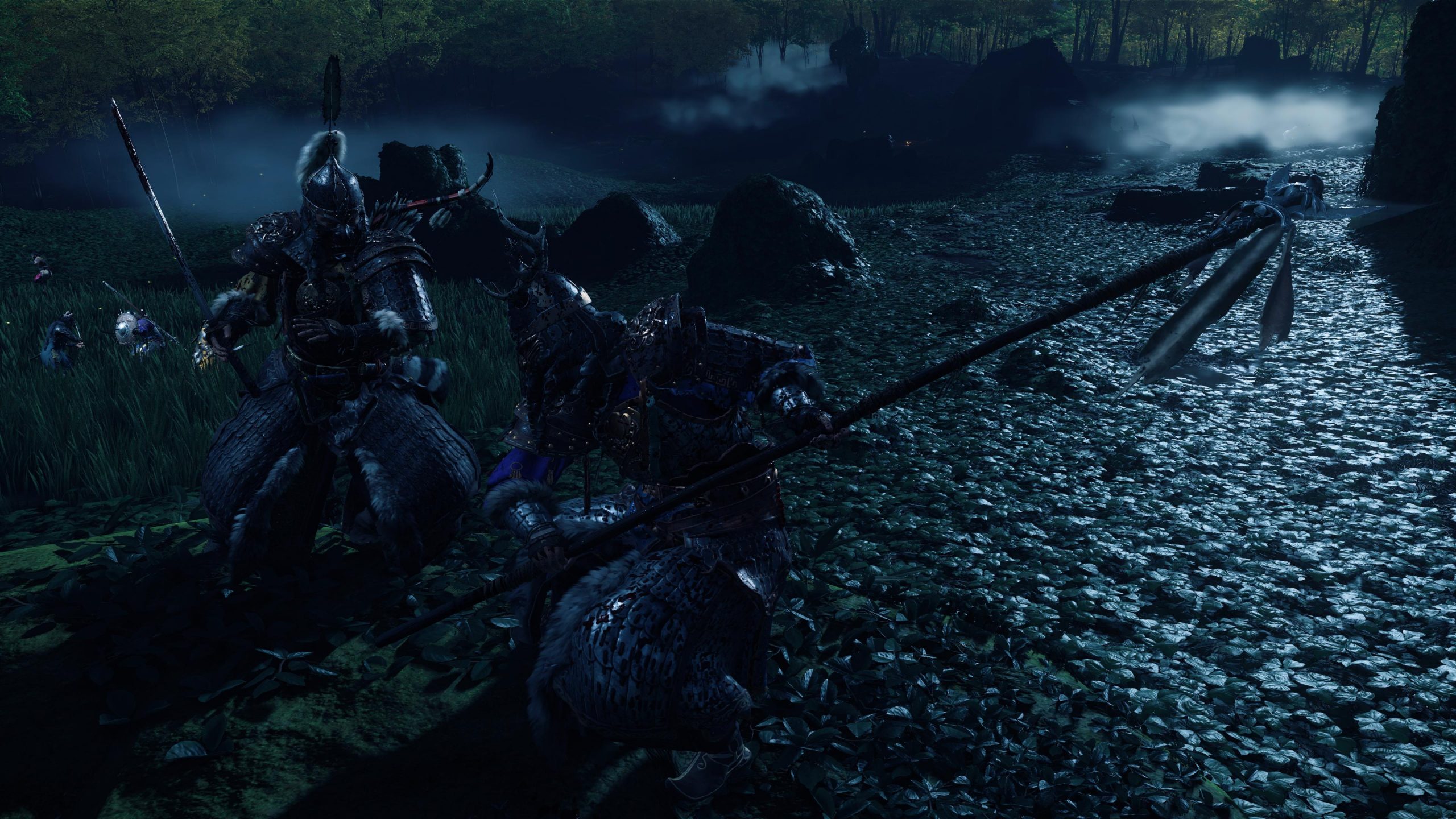 Iki Island may seem to be a small area on the map, but don’t let it fool you. The map is densely packed, compensates for its side with its verticality, and has a few new side activities. From huge shipwrecks on the beach to massive forts, Iki Island has them all. 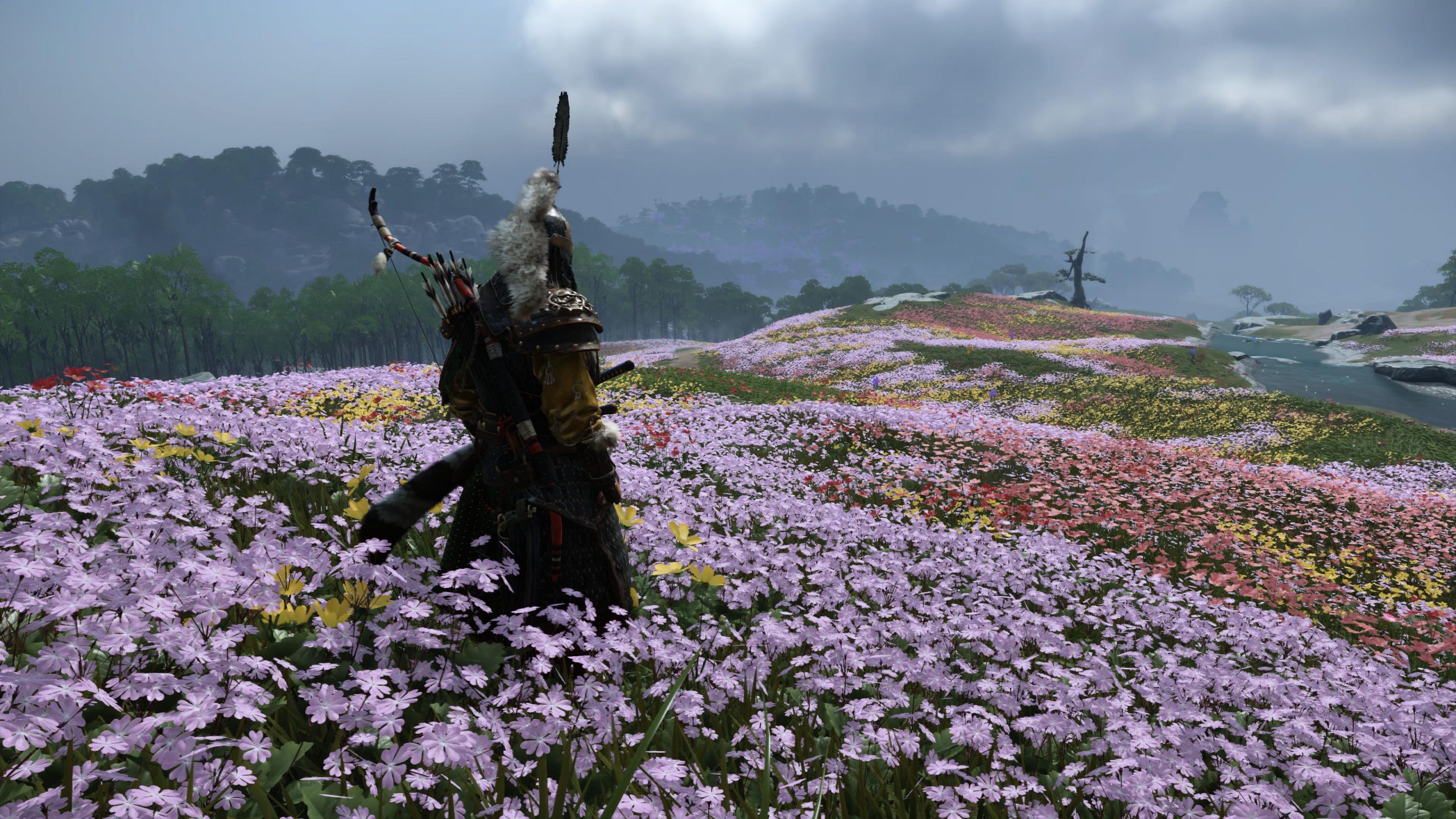 The game includes a few new activities. While some, such as finding Sakai banners are extremely laborious, others are immensely engrossing. Since the story is more focused on Jin’s personal life this time around, there are some instances where we see flashbacks to Jin’s interactions with his father and how that shaped his life. Apart from the haikus and bamboo strikes present in the base game too, the DLC has activities called Reflections which focuses on the protagonist’s softer side, instilled in him by his mother. These mostly include Jin playing his flute (to some tune taught by his mother) which is controlled by the motion sensor of the DualSense, while the local wildlife flocks around him. 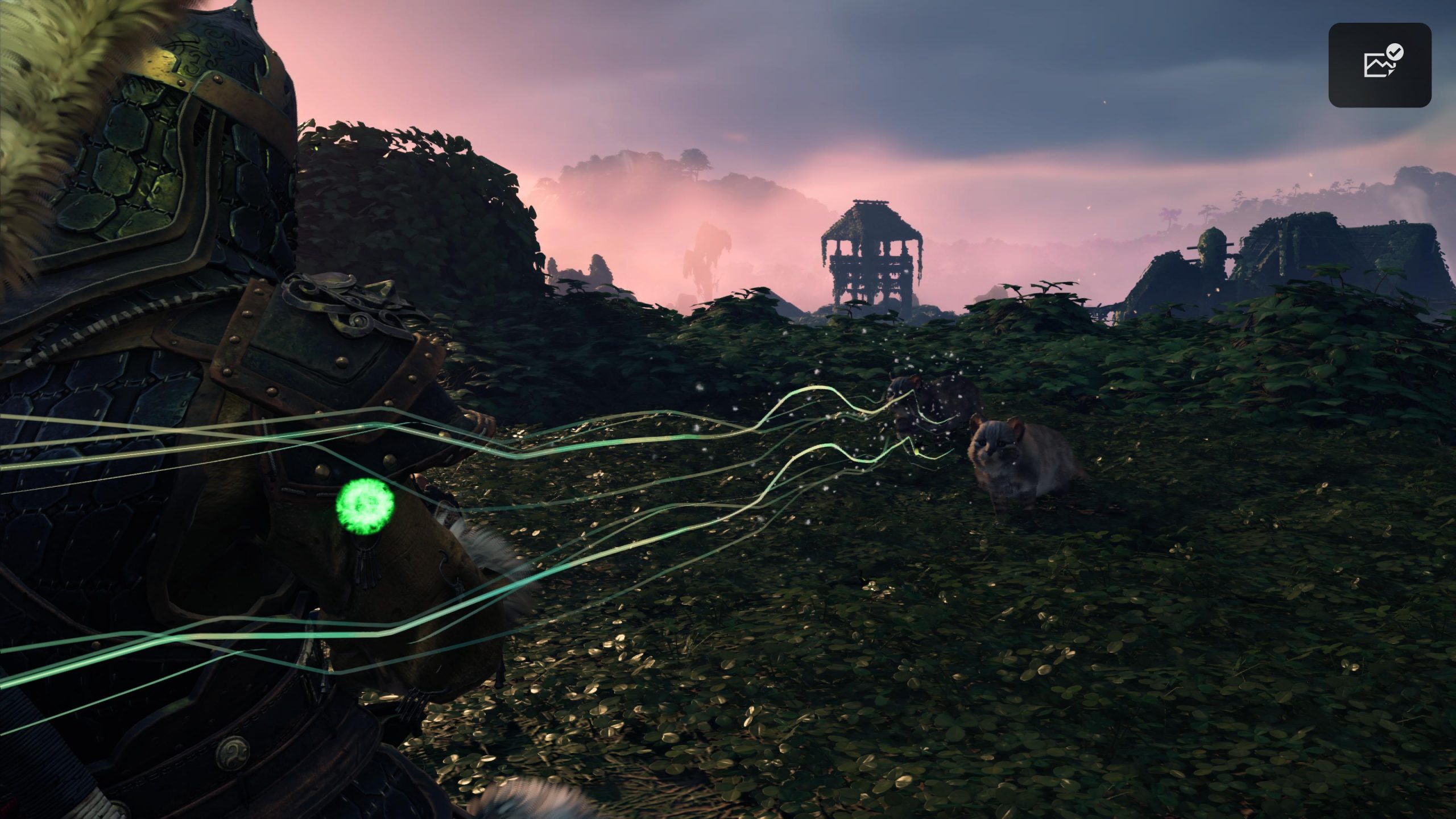 Apart from that, Archery challenges are a new addition, along with Arenas where the player fights against challengers using Bokken/wooden swords. There are two Mythic tales too, and they provide items that alter the game significantly. 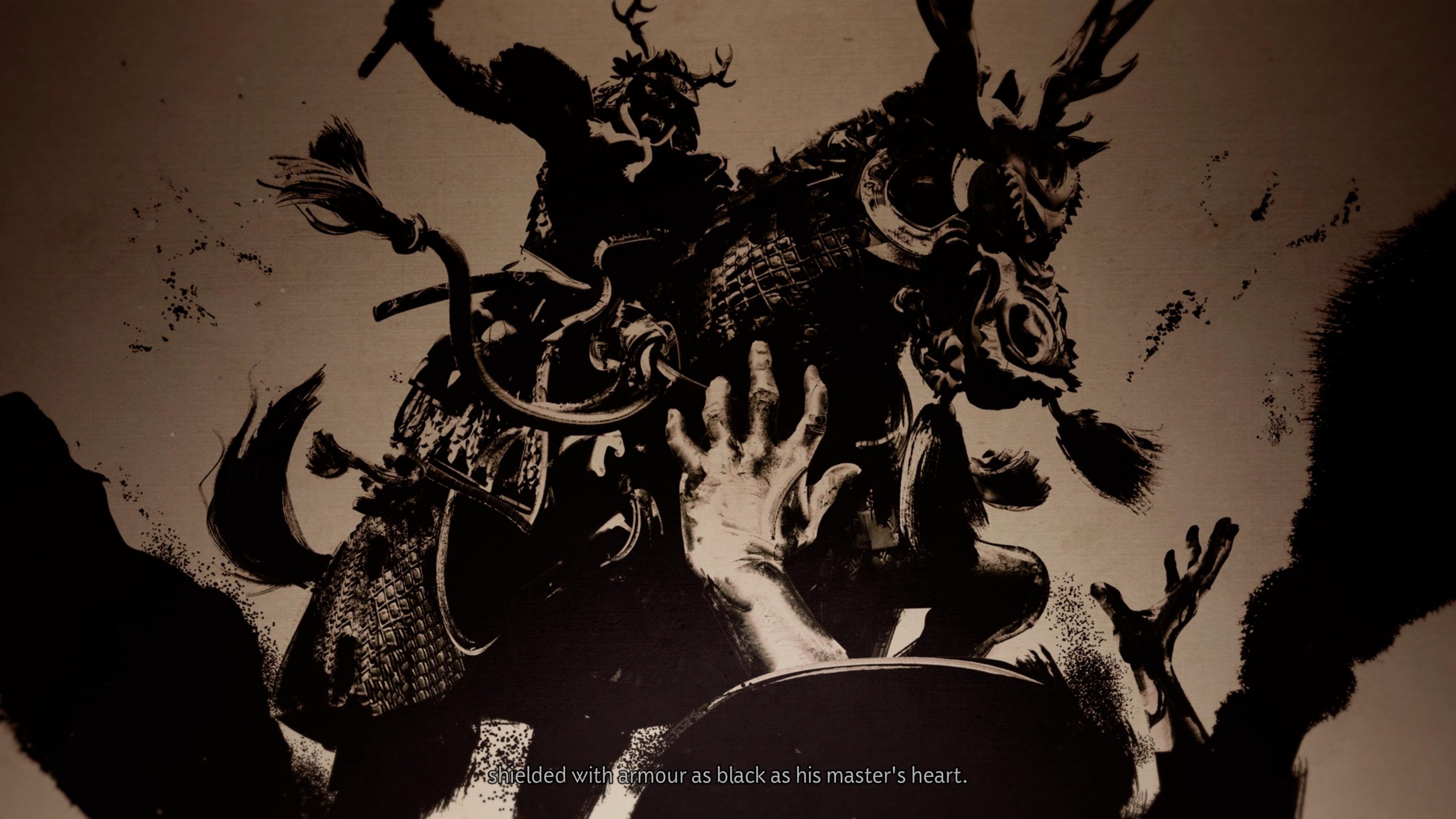 Combat has some changes this time around. There is a new variety of enemies, called the Shaman, which strengthens the surrounding Mongols who fight differently now. The same Mongol can use a spear in one instance and shift to swords and shields in the next, forcing the player to constantly change stances.

However, the biggest change in combat is how Jin’s horse can actively fight this time. By using up a bar called Resolve, the horse can effectively charge through waves of enemies while killing them, thus making it a child’s play to liberate strongholds. The Mythic tales also provide additional gear to bolster this ability.

The DLC also has enough side quests along with some recurring characters. But one of the most amusing features is how Iki Island hides a plethora of Easter Eggs for Sony fans. References to other Sony games are scattered throughout the place making the journey through the island a rather interesting one. 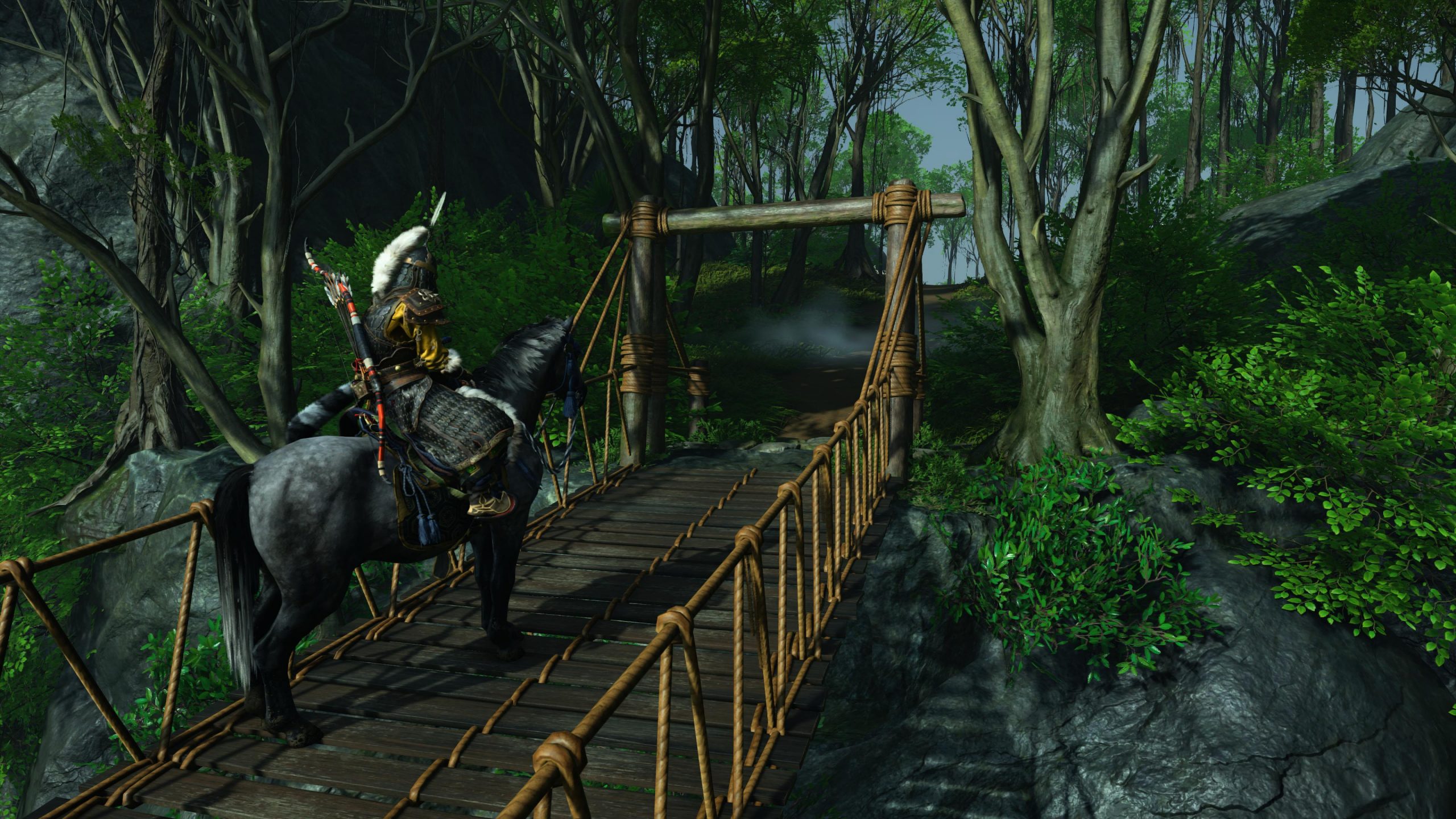 Disclaimer: Thanks to Sony India for providing us with a game code for Ghost of Tsushima: Directors Cut for the PS5!

For the price, Iki Island provides gameplay lasting four hours and around five times that worth of content if someone decides to explore everything. The story is more of what Ghost of Tsushima is but it never bored us for a minute due to the huge battles experienced and the plunge it took into the story of Jin’s childhood. Overall, Iki Island is a refreshing addition to an already great game and provides us another chance to have one last journey through feudal Japan and coupled with features such as the character’s lip-syncing to Japanese and almost zero load times, Ghosts of Tsushima: Directors Cut provides a complete package alongside the Legends update.