Its been a long time that almost everyone who have used mechanical keyboards been asking for the physical volume scroller on low-end budget oriented keyboards. Finally Galax took that feedback and implemented it on their new sub-genre and called it the “Xanova” series. Xanova comprises of not only mechanical keyboards but also other peripherals and accessories like Mices, headphones and even mousepads.

The physical volume scroller not only helps with its primary objective of increasing and decreasing the volume but also multitasks in decreasing/increasing the LEDs present on the keyboard. This is not only an underrated physical button function but also helps people especially gamers not bind their volume function to thier mices and helps them get 1 free button out of it so they can use it on their in-game activities and apply their own macros.

Today we are look at their entry level mechanical keyboard from Xanova By Galax called “Pulsar”. They come in two variants , Cherry MX blues and Cherry MX reds. 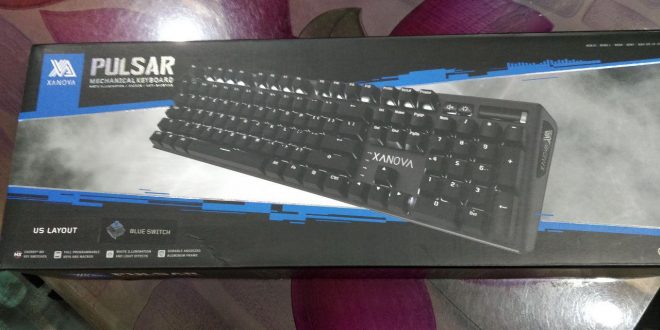 This is the retail packaging in which the pulsar keyboard comes in. We received a blue variant sample of the keyboard as the red variant went out of stock pretty soon as all of them got sold out on amazon at the price point of 5,000 INR which was a lightning deal on amazon as their opening day sales. 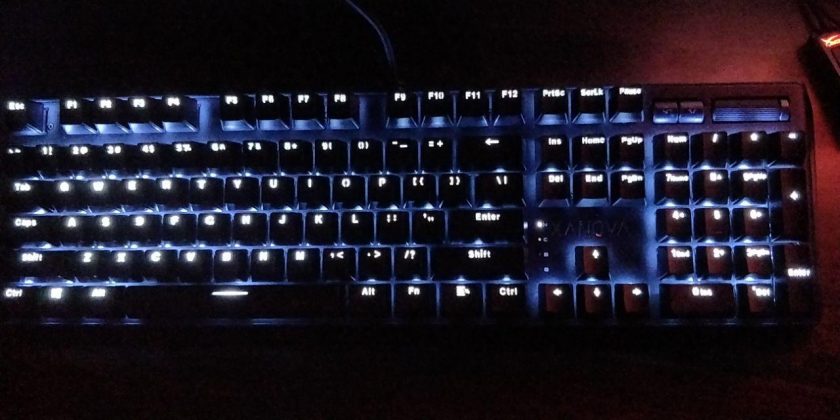 After plugging in the Xanova Pulsar keyboard , the first plug in reveals this bright white light on our faces and it looks gorgeous. The keys themselves are Cherry MX blue switches which makes a good amount of sound as they are known for and also these are made of plastic which is kind of expected given at this price point.

The quality of both the scroller as well as the LED and Volume button is plastic as well and the scroller is satisfying to use as well as it does a good job keeping up the function without any delays.

The keyboard is very compact and can easily fit on small tight spaces especially if u have a small workplace and cannot make more space for your keyboard and you dont want to purchase a TKL keyboard. This has a smaller footprint and the keys have good spacing between them as well for convenient typing experience. 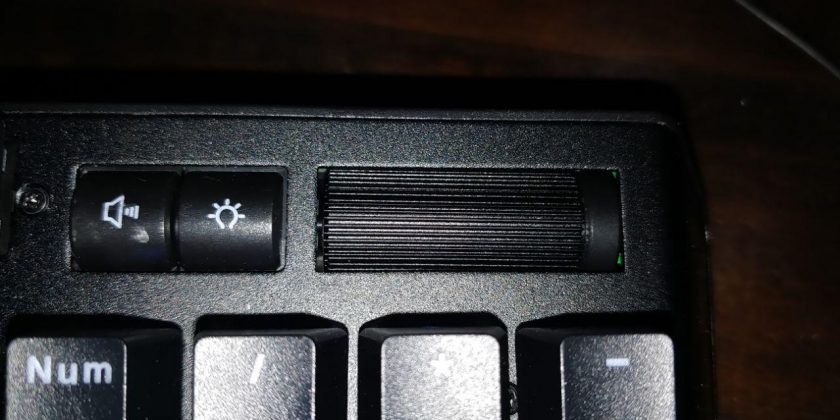 The base of the keyboard is plastic and this is where the question of durability comes into effect , but at the price  of only 5K INR , you cannot expect a brand to give us all these features with a brushed aluminium finish but if someone did it would be the perfect keyboard to have at this price point ( Circle Squadron MX RGBs do have a brushed aluminium base with single key RGB but the keyboard lacks the physical volume/ LED scroller button making it less functional and has a higher price compared to this Pulsar keyboard). 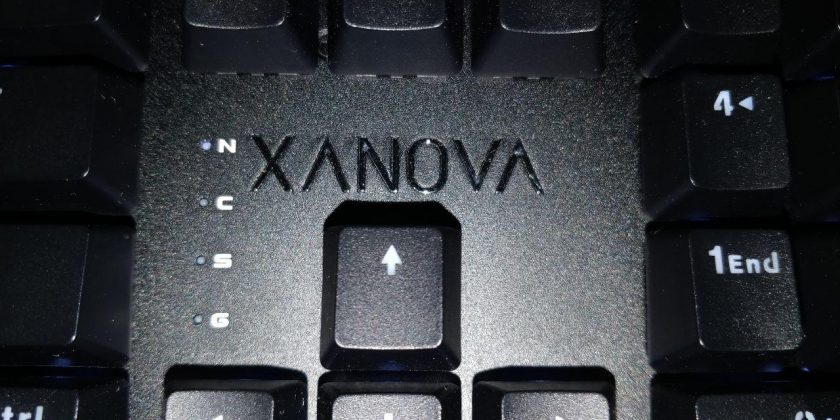 The Name tag “Xanova” is imprinted on top of the arrow keys and also on both sides of the keyboard making it look stylish even without any RGB craze going around which gives it a stealthy look and is not on-your-face all the time.

The cable is braided and is of decent quality as well and it does not seem that it would go bad in a couple of months of heavy usage which is good to have. 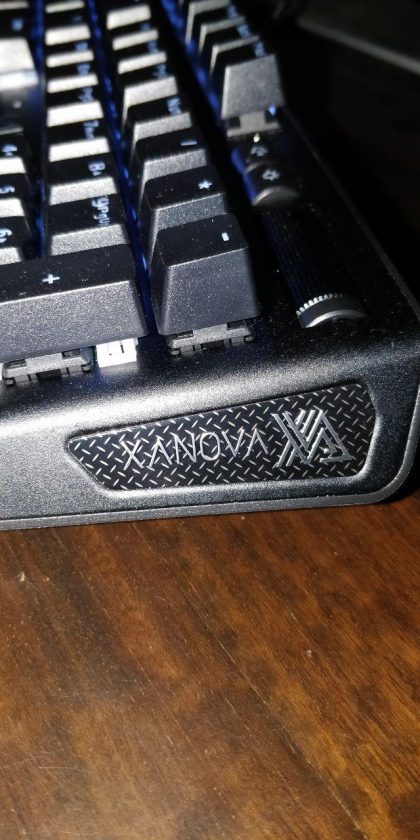 The white LEDs are put nicely at the bottom of the keys giving it an elegant look and there is no light leak from the keys as such when its up at full brightness and it looks great at night/ lights are out. There is no RGB in this keyboard which actually makes a better tradeoff for the physical volume scroller as a function at this price point.

Most people want to have such an underrated function when buying mechanical keys for the first time. Normally only high- end keyboards have this but they cost around double the price of this keyboard here in india namely from brands like Corsair and Razer. 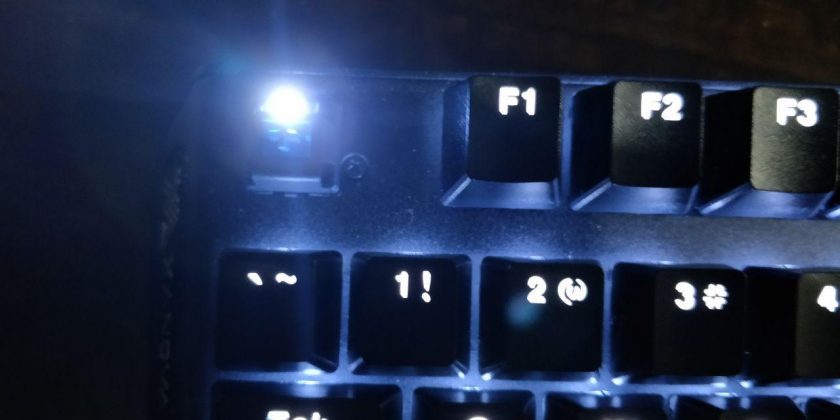 There are always two sides of a review when it comes to keyboards or mices or even headphones for that matter. First being the hardware itself and second being the software. 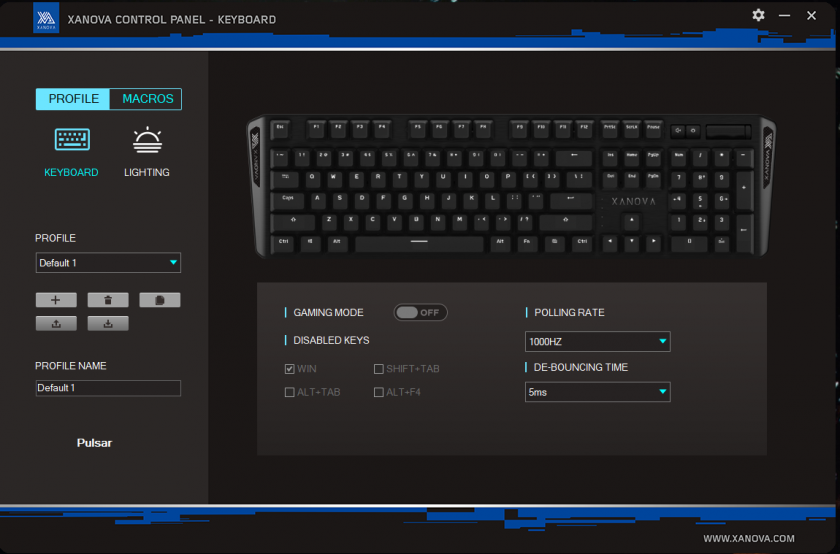 The software is called “Xanova Control Panel” and you can install this from Galax’s support page. At first boot, we see the two distinct features.. First being the profile where you can create your own game customized profiles where each profile has different functions or lightning waves or no light at all. Second being Lightning where you can control the LEDs with different waves/themes but is locked to White LEDs only since this keyboard has no RGB.

There is a dedicated “Gaming Mode”, activating which shows new options where you can disable multiple combos including Alt+tab, Shift+tab or even Alt+f4 in that matter when you are playing a game to not Minimize/close the game by accident. Another functions include Polling rate which starts from 125hz, 250hz, 500hz and ends at 1000 Hz and then we have the De-Bouncing time which starts from 5ms upto 40ms…

Next to the Profiles, we have the MACROS tab, where you can bind different keys in the keyboard to your own convenience of doing certain functions. You can also check for delays in between inputting/tapping different keys and assign functions accordingly as well. 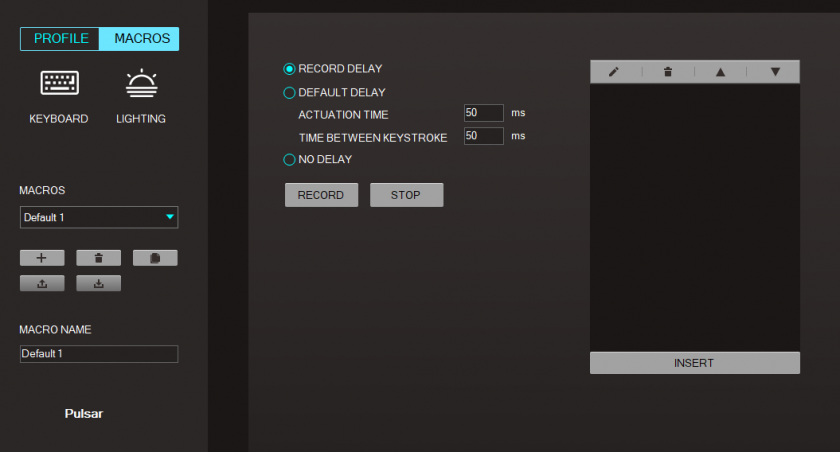 Last but not the least comes the favorite part of most of the people out there and that is the lighting tab which is next to the keyboard tab. Different effects include wave, backlight on/off, starry, fireworks, fountain and many more effects. You can also turn off the Lights/LED completely if you so wish to not use them at all.

It also has dedicated sliders for controlling both the brightness as well as the speeds of the effects that you will select from the Lighting Effects tab. We also have a direction tab at the bottom to select from which direction the effects should start from and end to.

Next tab on the right, we have keylight control where you can individually control the LED brightness of different keys. And lastly, we have the EQ.

Below, if you so wish , you can pause the Dynamic effects of the LEDs as well for as long as you want to if it disturbs your work/gaming sessions. 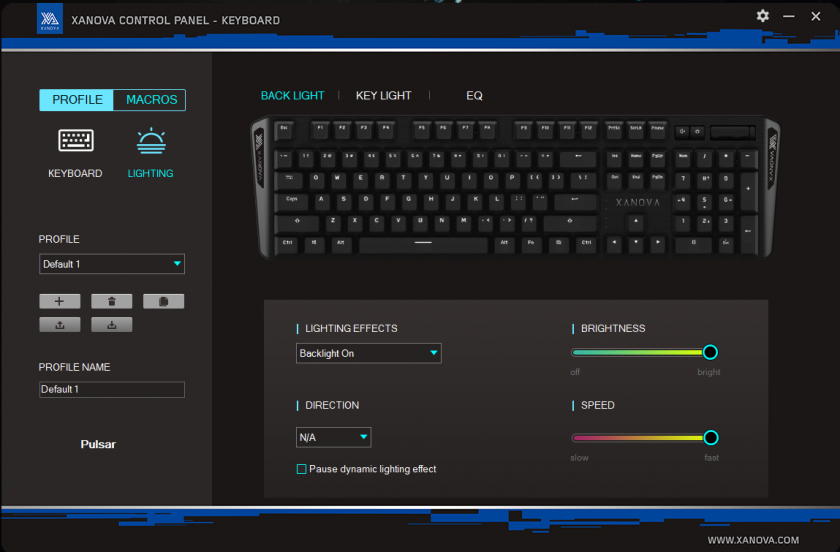 At the price point of around 5,000 INR , this is probably the best keyboard you can find which has a physical volume scroller and has legit cherry mx key switches. The reason why i am mentioning and focusing on the volume scroller is because no other keyboard has this and this may be the whole reason why this keyboard may sell in good quantities cause its the only keyboard in the world which is offering this feature at this price point.

There is another keyboard which costs less than this but has brown switches and is also from the same brand “Galax” known as the HOF Gaming Keyboard which looks exactly same as this one and goes for around 4200- 4500 INR in the local markets.

If you are someone looking to purchase the best bang for the money kind of keyboard with all the features and with no RGB craziness going around on the keys or the keyboard then this should certainly have your attention. This keyboard comes in both blue and red switches so select wisely as blue makes a lot of noise and is great for typing while the browns/reds are lot quieter and has less actuation force/travel distance than the blues which may help you in gaming sessions.

But at the end of the day, it all depends on the user with regarding to the choice of keys that they want.

That’s all for this review folks, another keyboard review is coming next week at this same price point which ill be detailing on my next review post. Thanks for reading and have a nice day ahead.