I am a big fan of OG Resident evil series games especially Resident Evil 2 and 3. So when I saw that both these games were being remade in today’s modern improvements, It got me really excited.

After finishing Resident Evil 2 remake, I was so happy that Capcom did right to its OG game and made it even better by adding multiple layers of replay value to the game. We had two different characters to choose from and even in them we got to play as two more characters which made the game worthy of its value/price.

However, this is not the case with Resident Evil 3 and in spite of this being way better than Resident Evil 2 in terms of gameplay, scalability, and exploration, it did not do justice to its OG 1999 game.

Instead, we got a cut-down version of it with removed map areas and fewer boss encounters and no player choices which were present in the original game.

For those new to the series, we play as Jill Valentine as the protagonist in Resident Evil 3 Remake who worked for the elite unit within the Raccoon City Police Department known as STARS (Special Tactics And Rescue Service) and is now hunted down by an unknown creature who later is recognized as NEMESIS who is tasked to take down the remaining STARS operatives. 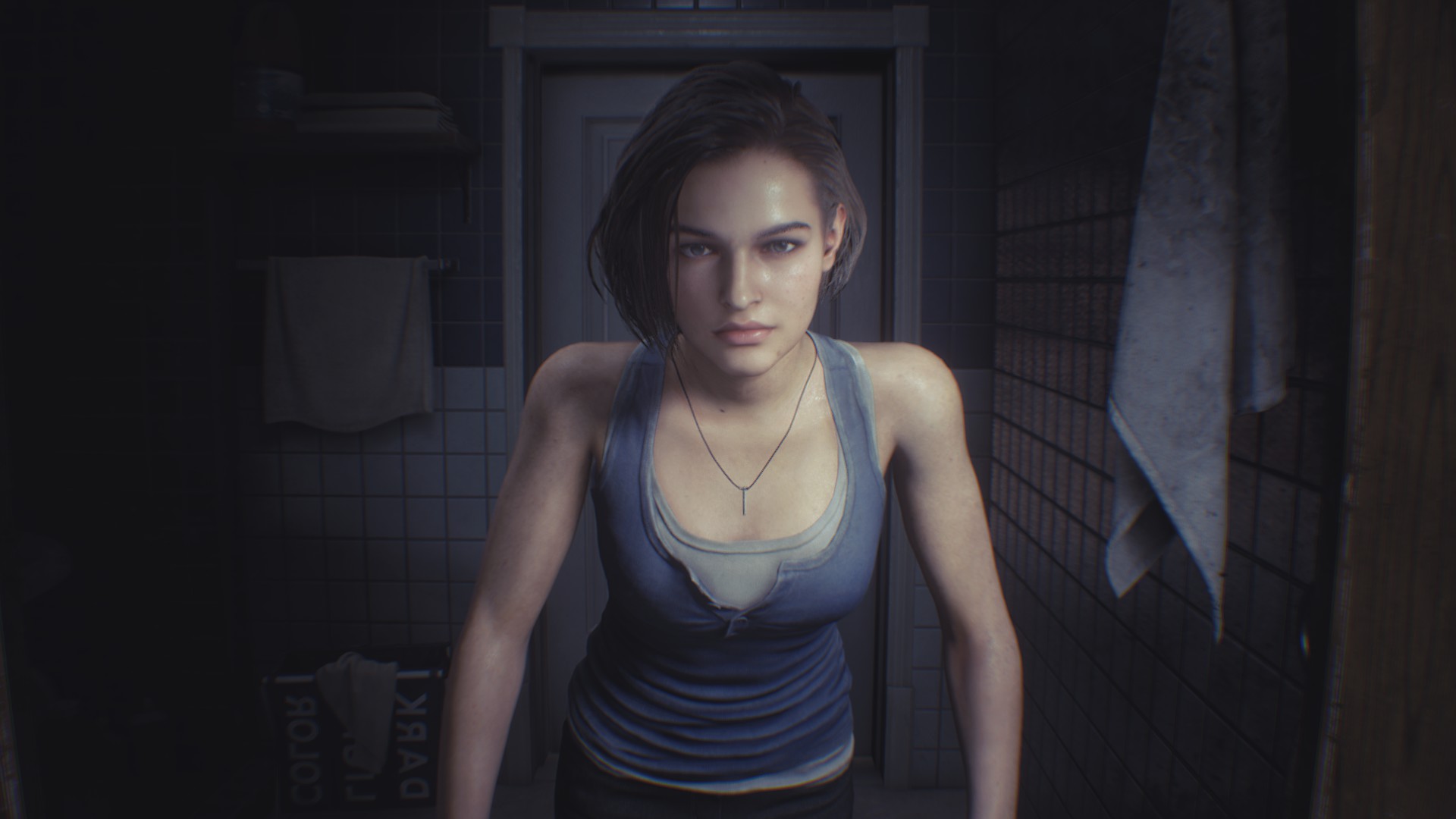 Resident Evil 3 Remake starts off in Raccoon City itself which is in a state of the pandemic which has been caused by the evil organization known as the Umbrella Corporation and is the ones behind the pandemic causing the cities population to turn into zombies.

Resident Evil 3 Remake has not only improved upon its predecessor which was Resident Evil 2 remake but also added a lot of quality of life and gameplay improvements which makes the game feel almost true to life.

For those who have played the RE2 remake, you know how good the Capcoms RE Engine is and how good its gameplay elements get showcased on the engine. Well, happy to report that they outdid themselves in that department as well.

Game looks and plays better than RE2 Remake and also they have added a lot of explorations that helped scale this game close to a semi-linear experience than a linear one.

The first two hours of the game are absolute nerve-wracking and in a good way. I did not expect the gameplay to be this good. In fact, I thought that RE2 has achieved the limit in the gameplay department but good to know that I was wrong.

We get a new feature in the game known as Dodge, where you can dodge enemy grapples and even NEMESIS punches if it is timed properly and will also slow downtime for you to shoot some of the enemies near you as well as a reward.

Different boss encounters with NEMESIS felt fresh and the 1v1 fights were also well-executed. I will not go in-depth about these since they would be a spoiler for new players.

We have our usual weapons like the ones we had in RE2, few examples being the pistol, shotgun, MGL Grenade Launcher to name a few. This time, unlike RE2, we have a knife that does not self-destruct after a couple of hits and is indestructible. The developers did this to make knife only runs possible this time so that the hardcore fans are able to test/challenge themselves if they wanted to do a knife-only speed-run which in my book was a good idea.

The levels, characters and the textures in this game are detailed and the pacing of the game is what makes it so good. Throughout my gaming time, there was not a single moment where I felt safe except when I was in a safe room which is really good.

RE3 Remake looks absolutely stunning, from the start till the end, there was no texture issue or any kind of other issues that I could complain about except the sound and animation, sometimes not working in proper sync which I am sure will be fixed in release day patches.

The supporting cast, Carlos and his buddies from the Umbrella Biohazard Countermeasure Service (UBCS) do a good job providing additional layers to the gameplay experience. 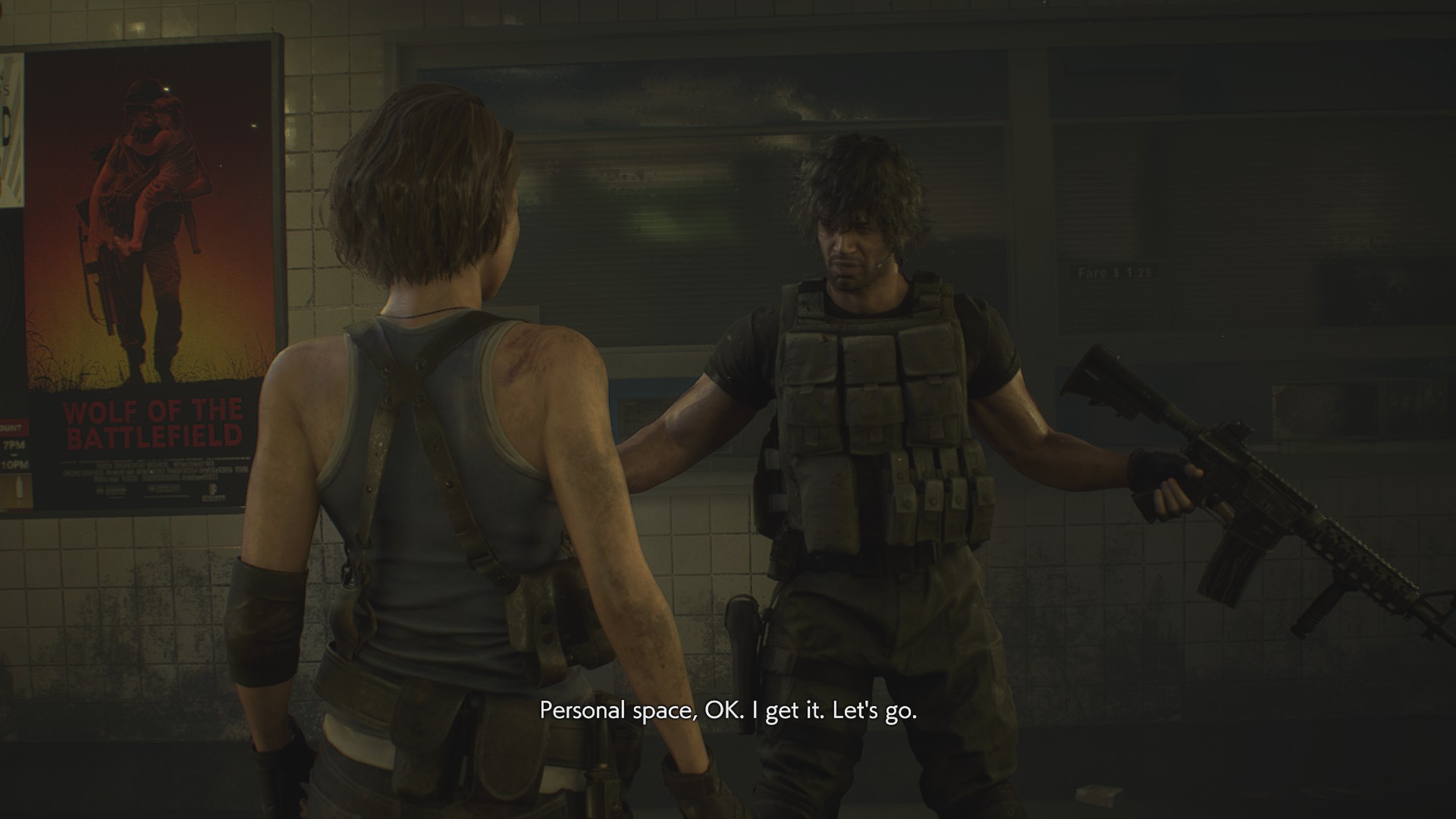 The lighting, high detailed textures looked absolutely amazing on my GTX 1070 and an i5 6600k with 16gb of RAM. The game ran at 130-160 fps without any bad dips and there were no freezes or any performance issues whatsoever. 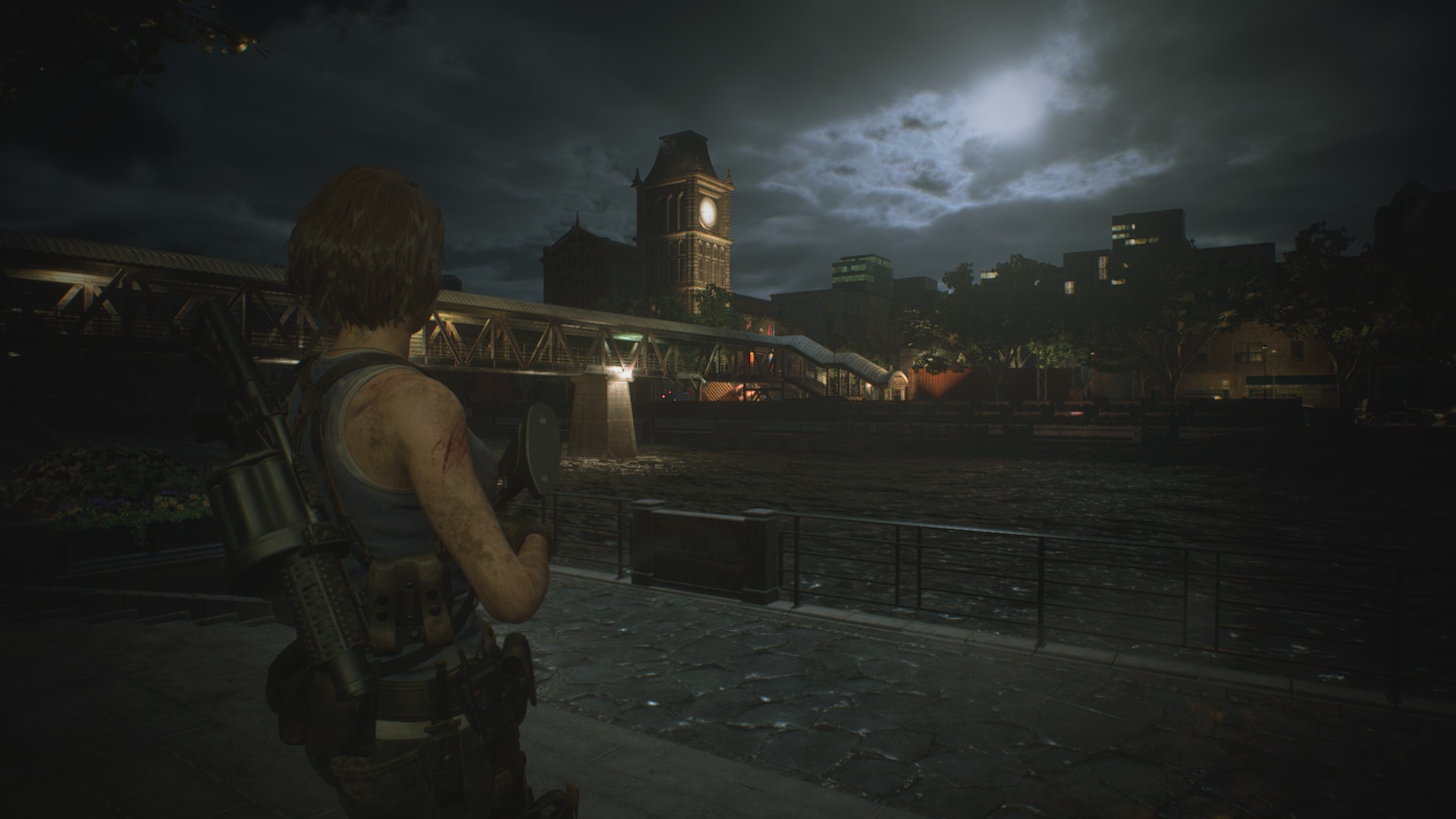 The music, while NEMESIS is chasing you, is absolutely amazing. It just does justice to the nerve-wracking that you are going through when he is around chasing you down.

Before talking about what I did not like, I would like to mention that I have already played the original Resident Evil 3 game on my PS1 and only then I have compared it with this remake.

Now, there are a lot of things to complain about. Firstly, the game ends in roughly five hours. YES, five hours only even after collecting all the items and ammo pickups including unlocking all the locked cases and lockers. The original RE3 was also a short game but few things are different here.

Secondly, the game has a lot of map areas cut off from the OG game which is a deal-breaker for most people especially the hardcore OG fans who know the game and would expect the same maps to be present even if for a shorter period to keep the game as it was but that did not happen.

OG RE3 also had player choices where you could fight or run away from NEMESIS which is absent here and forces you to follow a single linear path.

A lot of bonus features can be unlocked via points that you can use and unlock after finishing challenges in the main game. There are lots of bonus items, weapons and cosmetics that you can unlock to ease your gameplay experience on the harder difficulty but that is about it. 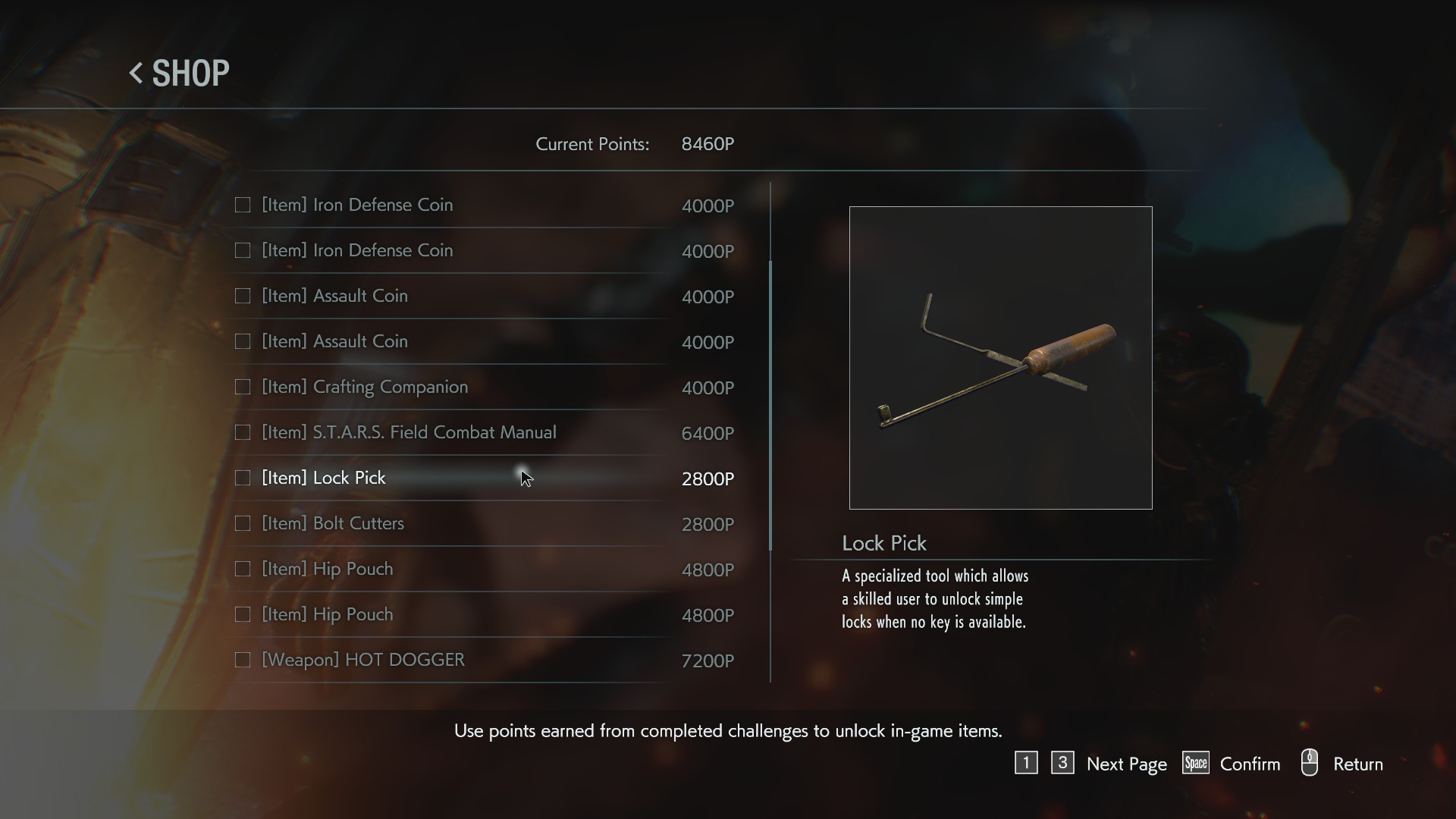 Unlike RE2 Remake, there is no such replayability value present here like how we did 2nd run playthroughs with either Leon or Claire where the item locations were altered which made the players play and relive the game once again but in a fresher environment since they did not know where the items have been placed this time around.

Resident Evil 3 Remake comes out across PC, PS4 and Xbox One on 3rd April 2020. I played on the PC version and it costs 3499 Indian Rupees on Steam.

I will not recommend anyone buying this game at this price point since it will not give proper value proposition with regards to price. I highly recommend waiting for a proper sale to pick this up.

Resident Evil 3 Remake delivers the best RE Experience till date but its shorter campaign time and almost no extra replayability value apart from buying infinite weapon mods or buffed up offensive/defensive coins in order to make harder difficulty easier makes it a hard sell at the price point of 3499 INR. I would highly recommend that you wait for a sale and then pick this up.