I have never died this many times on a video game than I did in Nioh 2. I have almost lost count as to how many times I died, this game is that difficult. There is no shame to admit this but it only shows how good and hard a game can be if done correctly.

Soulsborne fans rejoice, this game is for you and if you are someone who loved Bloodborne and Nioh games as well as Sekiro then you are in for a treat. This game rewards handsomely after a boss fight and also mini-boss encounters as well.

Nioh 2 runs at 60 fps on action mode and 30 fps on the other resolution/movie mode if you prefer the cinematic way of playing, you can go with the latter option. But for me, since this is an action game, going with 60fps action mode was a no brainer for me.

The game runs at constant 60fps throughout with a very few hiccups else there were no major frame drops during my gameplay. 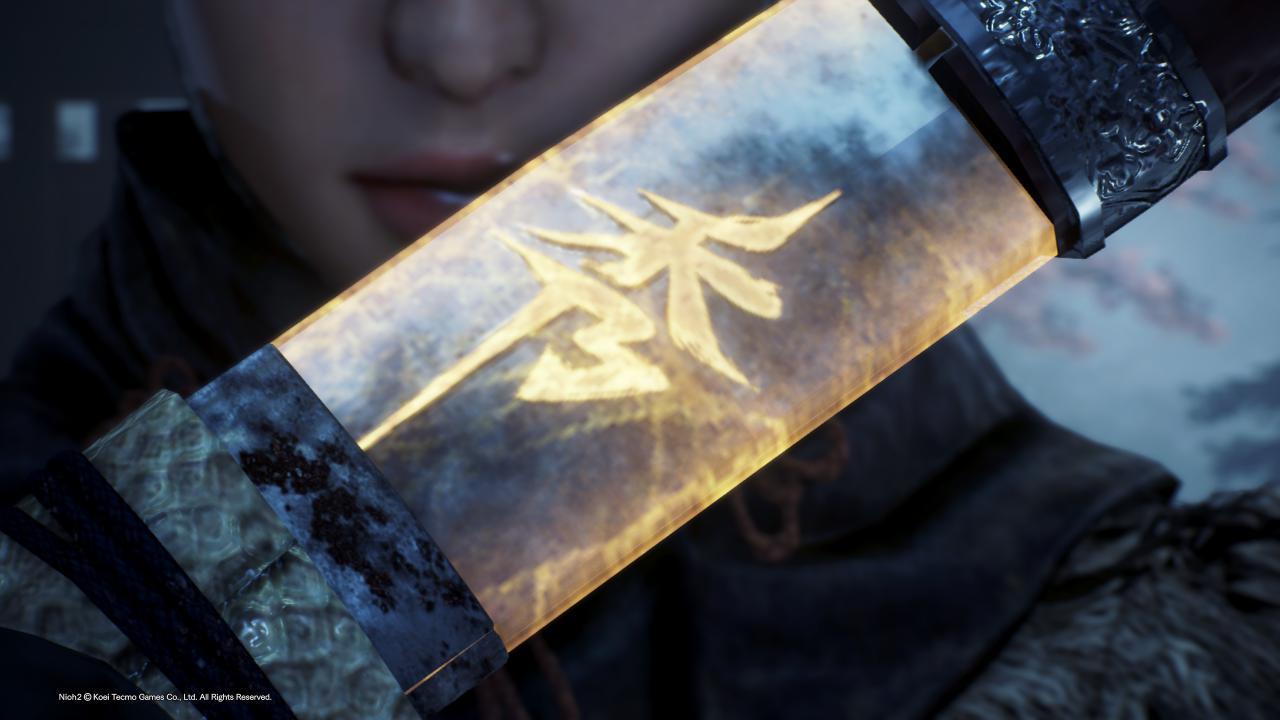 You start your journey in Nioh 2 with the usual character creation tool and there are a lot of customizations that you can do to your characters. You play as a mute character, the same as the previous Nioh game. 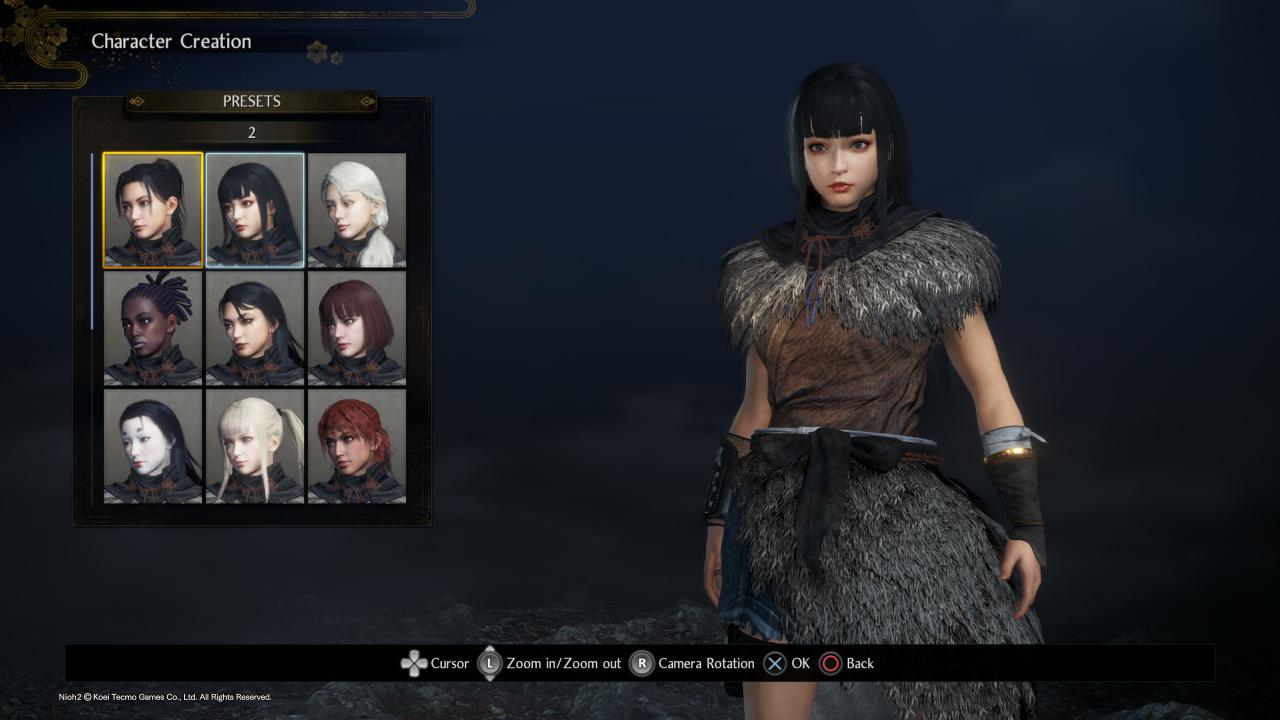 After you have customized your character, you will get to select which two weapons you want to start your journey along with your Yokai, which is the beast form of your character. There are three different forms of Yokai’s and you can choose one from them to start your journey with. This is important since you will be optimizing your build on top of these, meaning you need to take this step seriously

Having a proper build in this game takes time and patience so having a strong base right from the start really helps as you keep progressing through the game. So make sure you choose the right weapons for yourself before you being your journey.

I will try to keep this review as spoiler-free as possible so that you could enjoy this long and amazing game on your own terms. 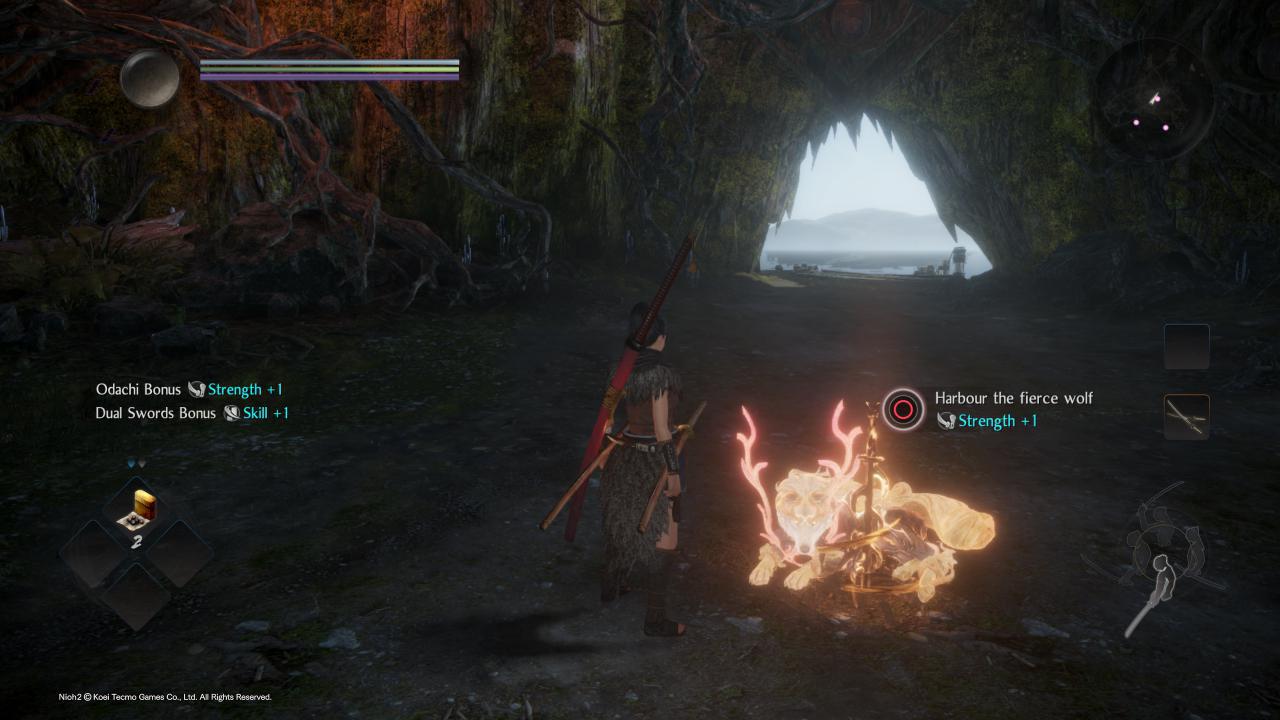 Let’s talk about the gameplay as souls borne game tend to be very difficult and unrewarding at times, more so to people who are playing it for the first time. I was not at all shocked when I had my first death at the beginning of the very first level. I knew that I had entered someone’s marked territory and things wouldn’t be going well for me from here.

After I was through the first level and my first main boss fight, I was able to see more options and also sub-missions on the map which had their own recommended levels and also other activities as well. 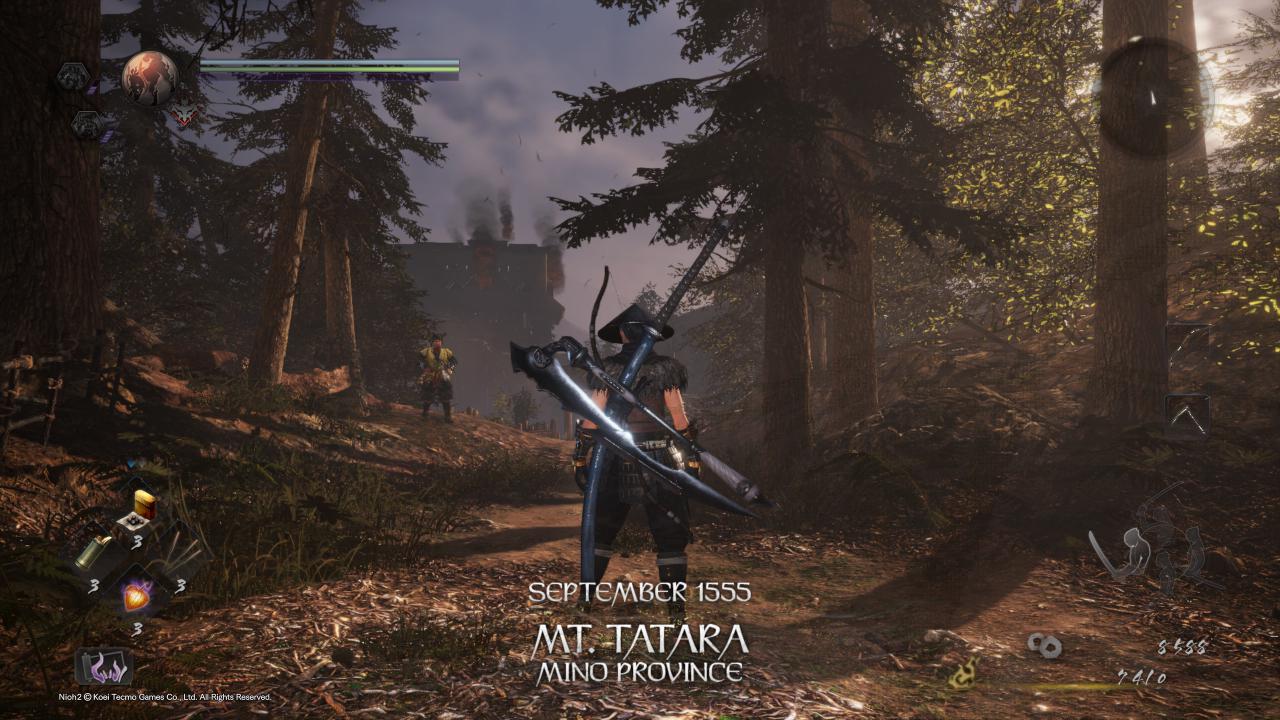 I am very happy to admit, that I died countless times on my journey but I got enough farm and grind out of it to level up and beat the different mini and main bosses. This game is very rewarding, unlike other souls bourne games, meaning you get an ample amount of items and weapons along your way which does not suck. Kinda opposite actually.

The number and quality of the weapons and items you get in this game are just amazing. Based on what you started with and what you end up using from start to finish will vary according to your own playstyle and also boss fights and areas. Some levels are done best with big swords, while others with switch-glaives or dual hatchets.

After two levels, make sure you visit the merchant where you would be able to sell/buy items and weapons or also combine them with special effect runes and make them even more powerful. These magical runes have different features and differ from runes to runes. Some will help you recover your Stamina(Ki) faster, some will help you with special weapon effects like water or electricity which is actually effective against water and electrical non-immune targets or bosses.

So make sure, you are having a proper build or combining proper magical runes with your weapons and then think about going head to head with the other levels cause bosses in this game are very tough. They can easily 1 or 2 hit you if you do not dodge or block their attacks on time. This game is like playing a rhythm game, where all your actions need to be in proper sync in order to get you heavy damage hit on the enemy else you will die. 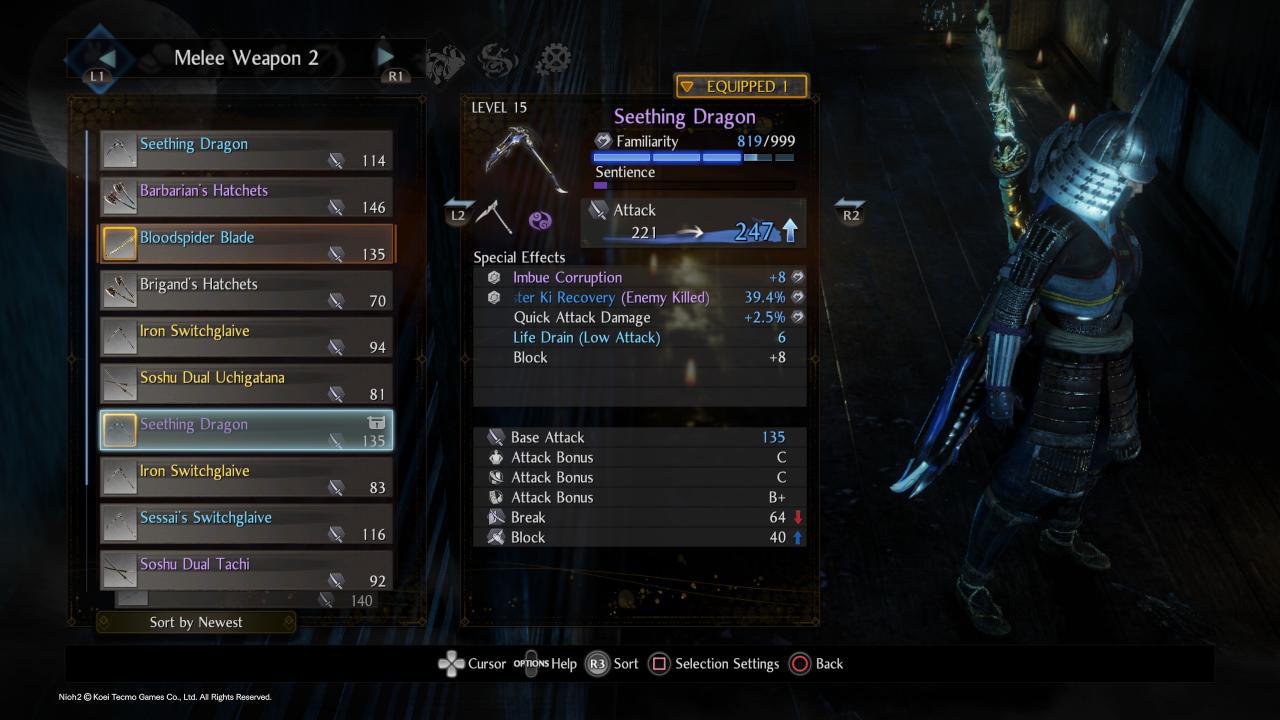 Talking about resting places/checkpoints. We have the same shrine which Nioh 1 had here in Nioh 2 as well. You can get your health back up and also level up your custom character. This is the most vital part of the game after selecting proper weapons is how defensive or offensive you want your character to be. Put points in the proper places if you want to live else the game will punish you real hard.

When you die, you will drop all your amrita and soul cores so staying alive in this game is the most important thing that you will do.  Take your time, plan and then fight the enemies or fight them one by one by attacking them and then running away behind so that you won’t have to fear about getting killed before the next shrine arrives and you can save your progress and rank up using the accumulated Amrita. 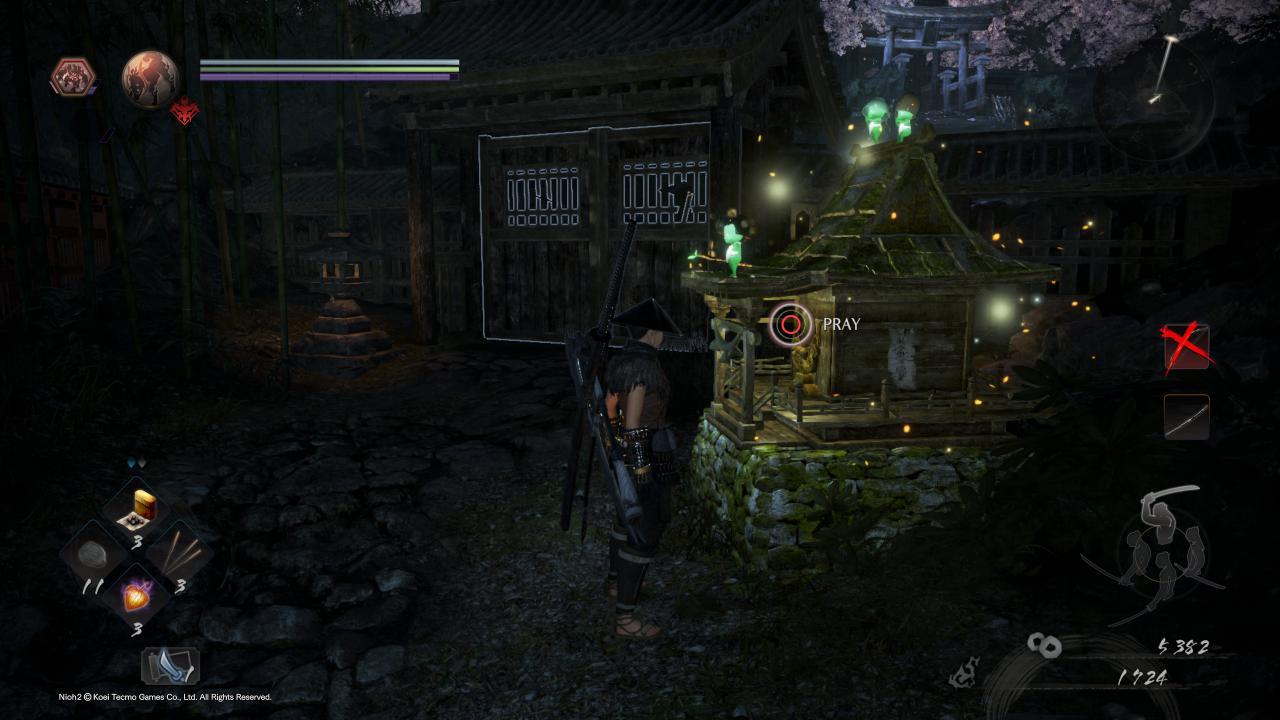 Attack animations work really well and are as smooth as the first game. The hitbox is accurate, every hit is accounted for you do not miss any hits unless you are using spell immune weapons to attack the bosses. The enemies will see your attacks coming if you use the same attacks all the time, they will also know when you will be dodging as well making your gaming experience miserable so spicing things up here won’t be a bad choice.

Different enemies have different weapons and Anima/Ki consuming techniques which also gets depleted.

The game is fair when it comes to these things but there is still an awful lot of buff and nerfs that need fixing which at the point of writing this review, the devs have released a patch for it as well which you can check it out. 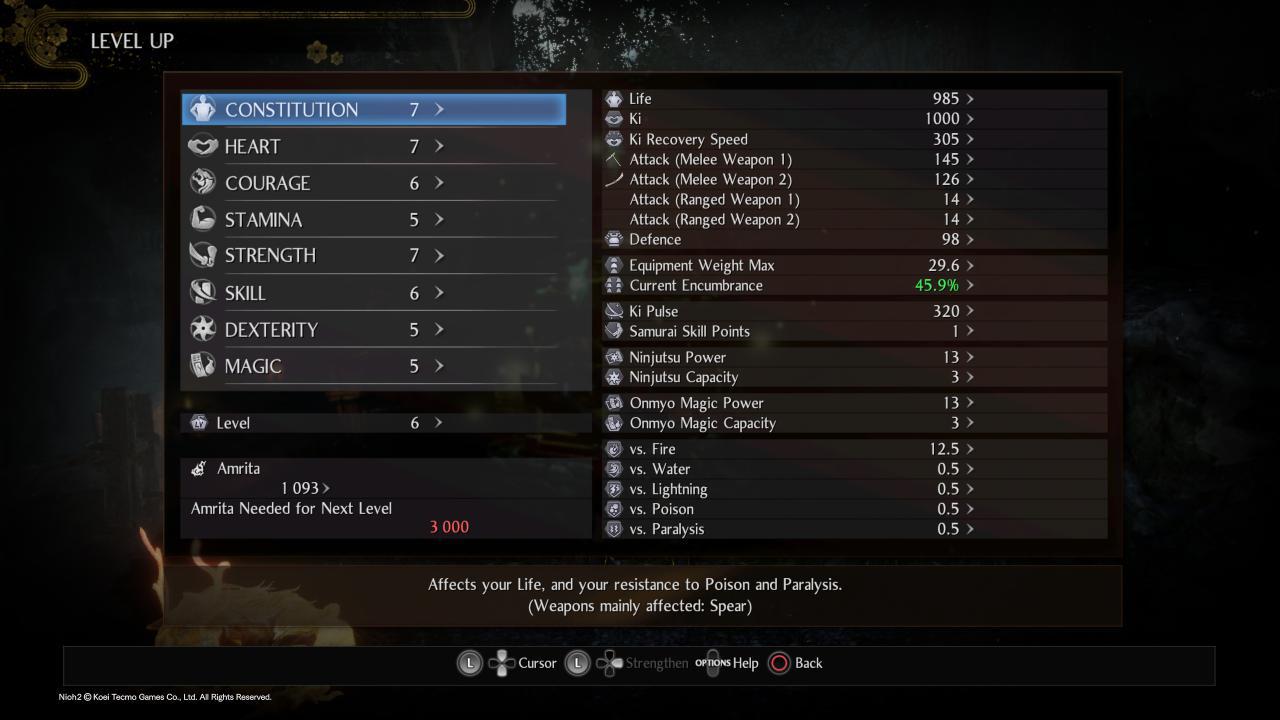 Now coming back to your Yokai beast form, using Soul Core abilities such as the burst counter will consume your anima meter which is in purple but it will really help you counter your enemies’ attack when the screen flashes red. You will be using this a lot throughout your journey so make sure you practice this in the training area. 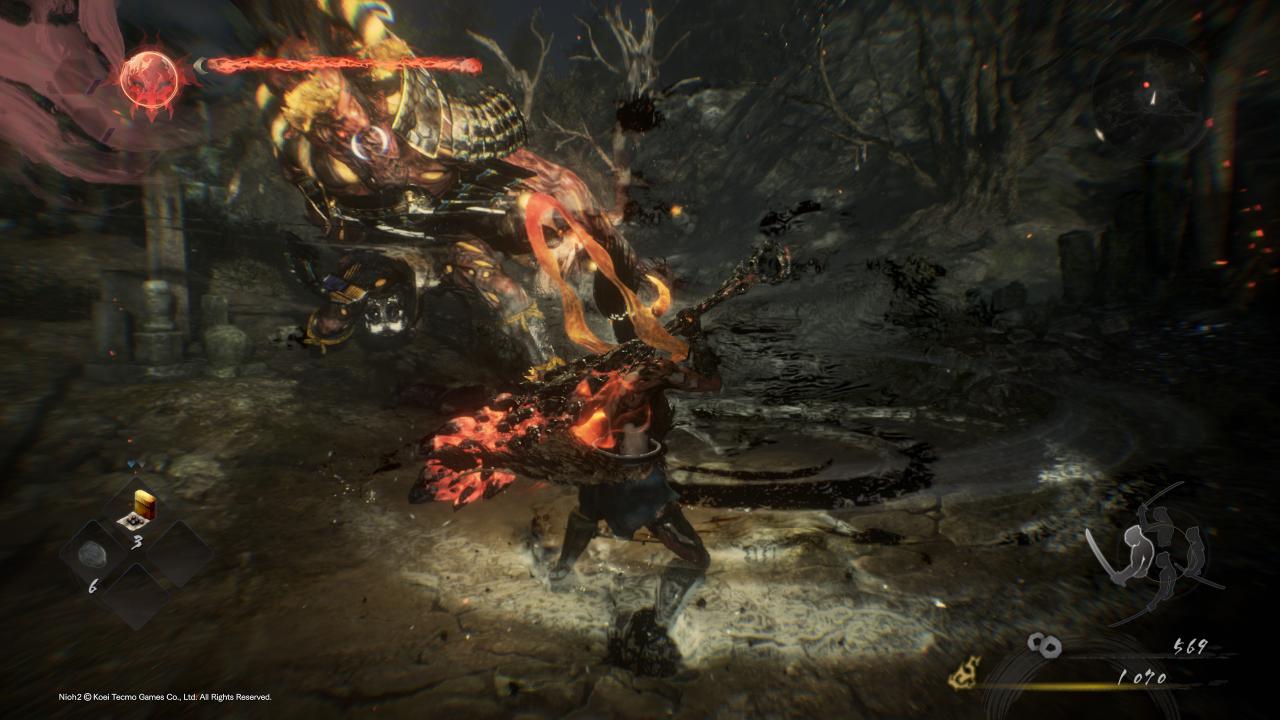 Your anima consuming abilities are very well made and you can have two of them selected at the same time. These are also acquired via drops by killing enemies/bosses. These are very powerful abilities and should be used during multiple enemies or only when absolutely needed since anima does not fill up as fast as much as your Ki does.

Keep checking your anima meter and build up a good attack/defensive/magical built and you can pass through any hurdle that your enemies throw at you. 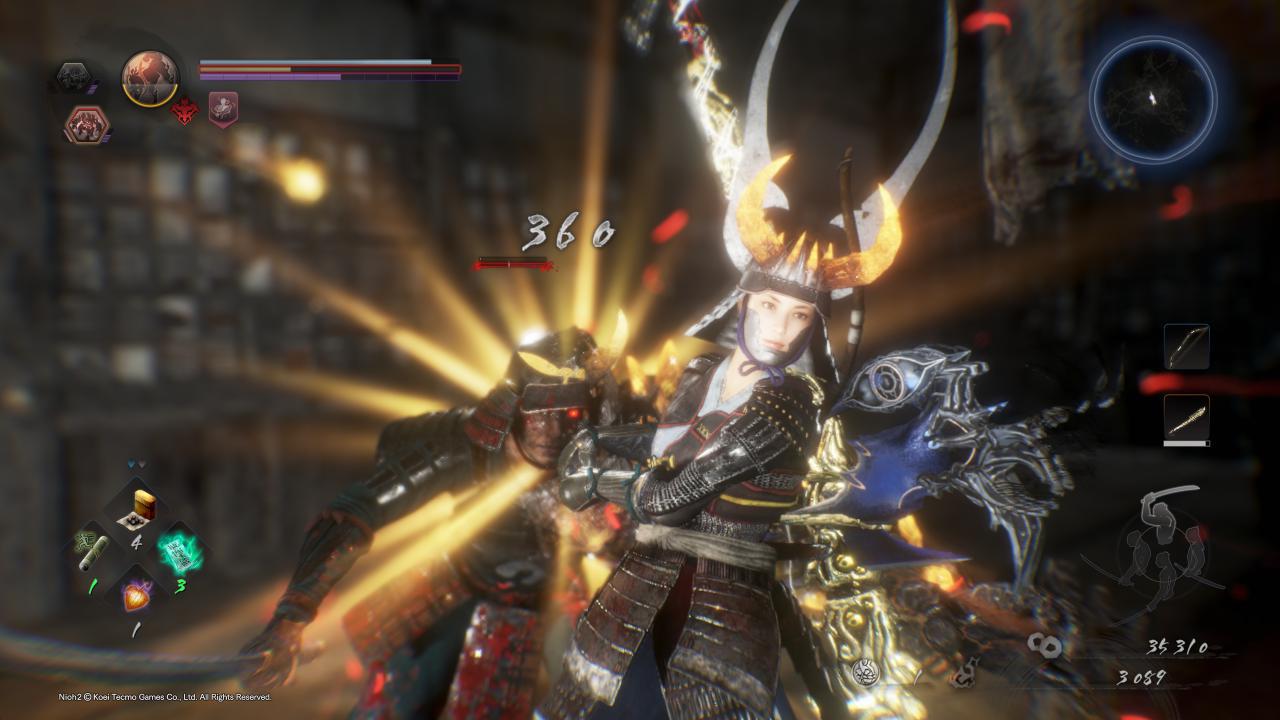 The best thing about Nioh 2 are the boss fights. There are together from what I can say approx 27-28 boss fights and all are amazing and unique in their own way. You will die countless times trying to learn their technique and also the timings of their attack and how to counter it.

Once you know their way, then you will come back stronger and you can easily win against them. But patience is the most important thing in this game, without which you won’t be able to progress further into this game.

You can recover your lost amrita from the same place you died before and continue onwards from there till you get to a shrine to use them for leveling up. 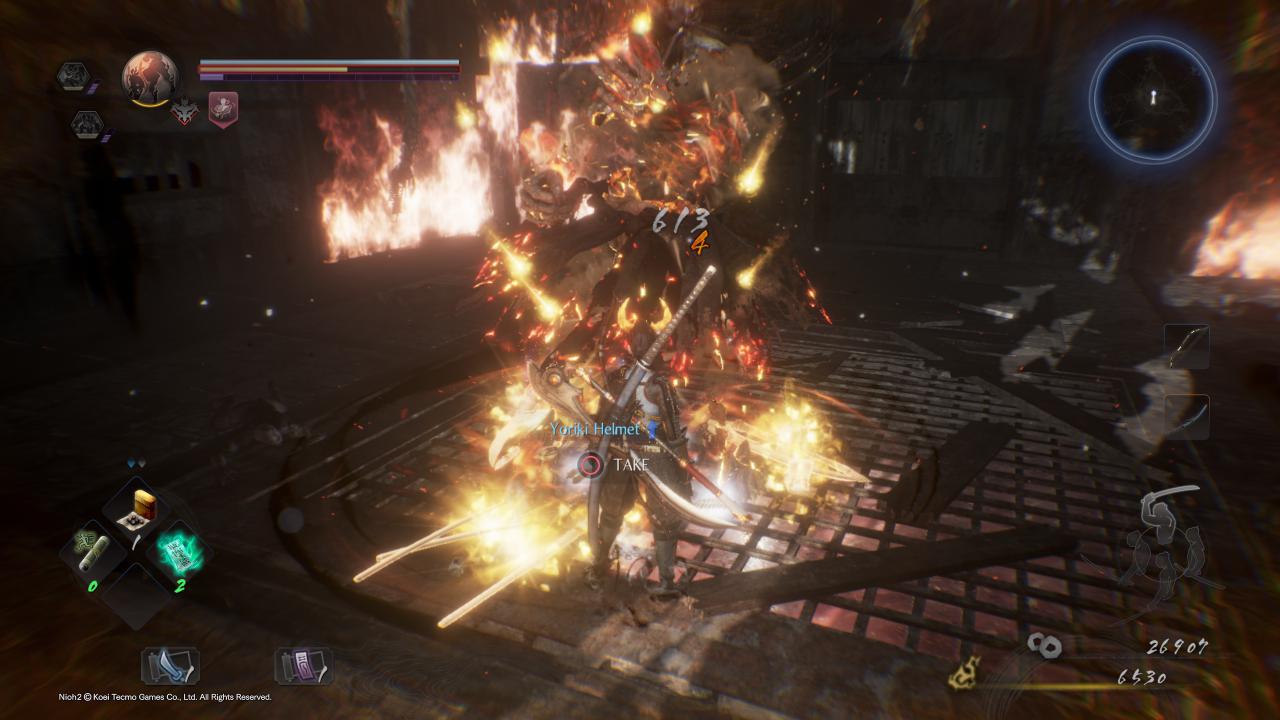 Shrines have other slates which include KODAMA BAZAAR where you can offer Rice( which you can get by giving up your weapons/items that you do not need) and get consumable items in return such as Elixir( Health consumable) or even arrows for your bow. 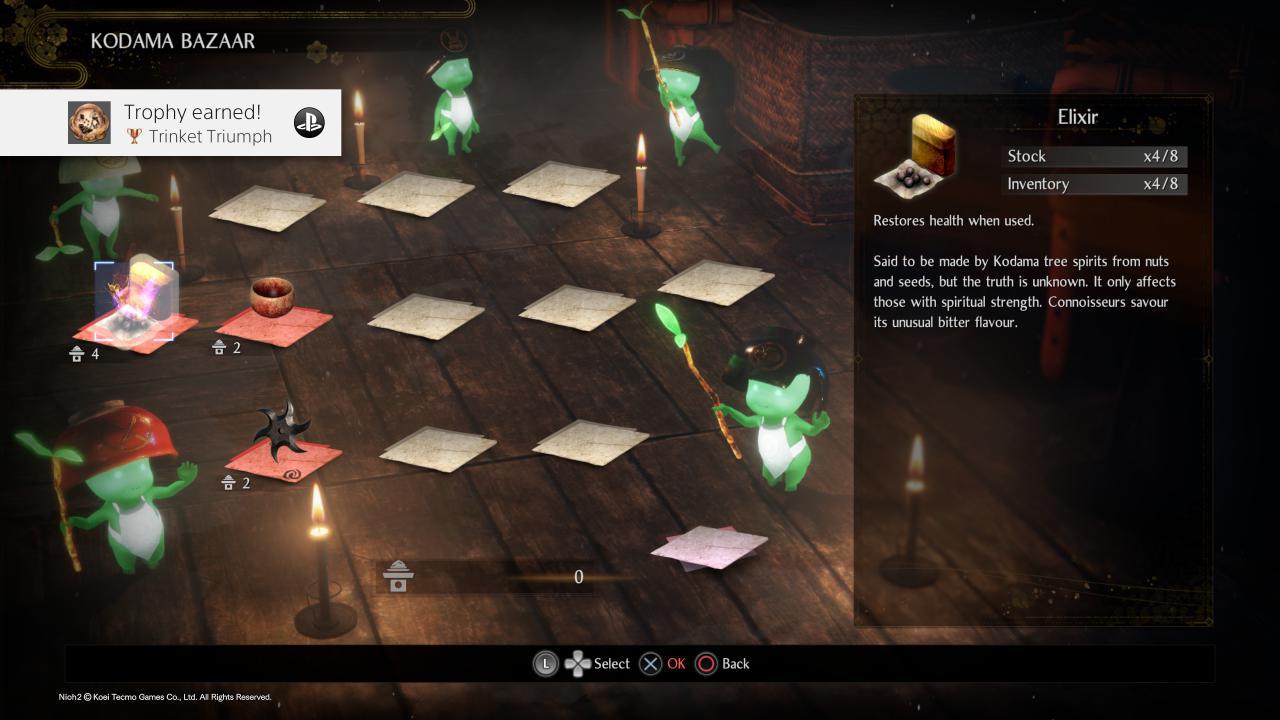 Here, you can also change your beast if you want, maybe go magical in between or go back to your physical damage dealing built. You can change them here as well as summon friends who can aid you in this journey. 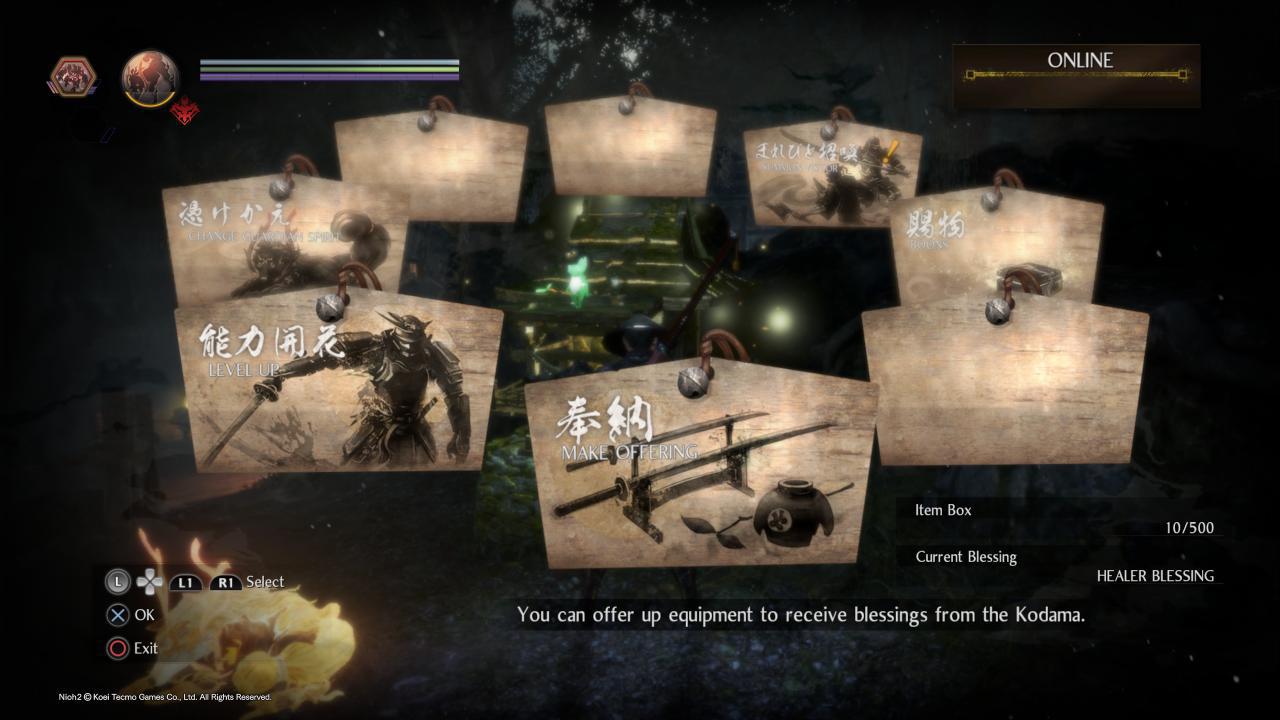 After finishing a few levels, you will be able to use the merchant/Blacksmith tab or go back to your hut and change your appearance if you wish. There are also different online modes that you can participate in by selecting Torii Gate from the options by clicking on the starting point. 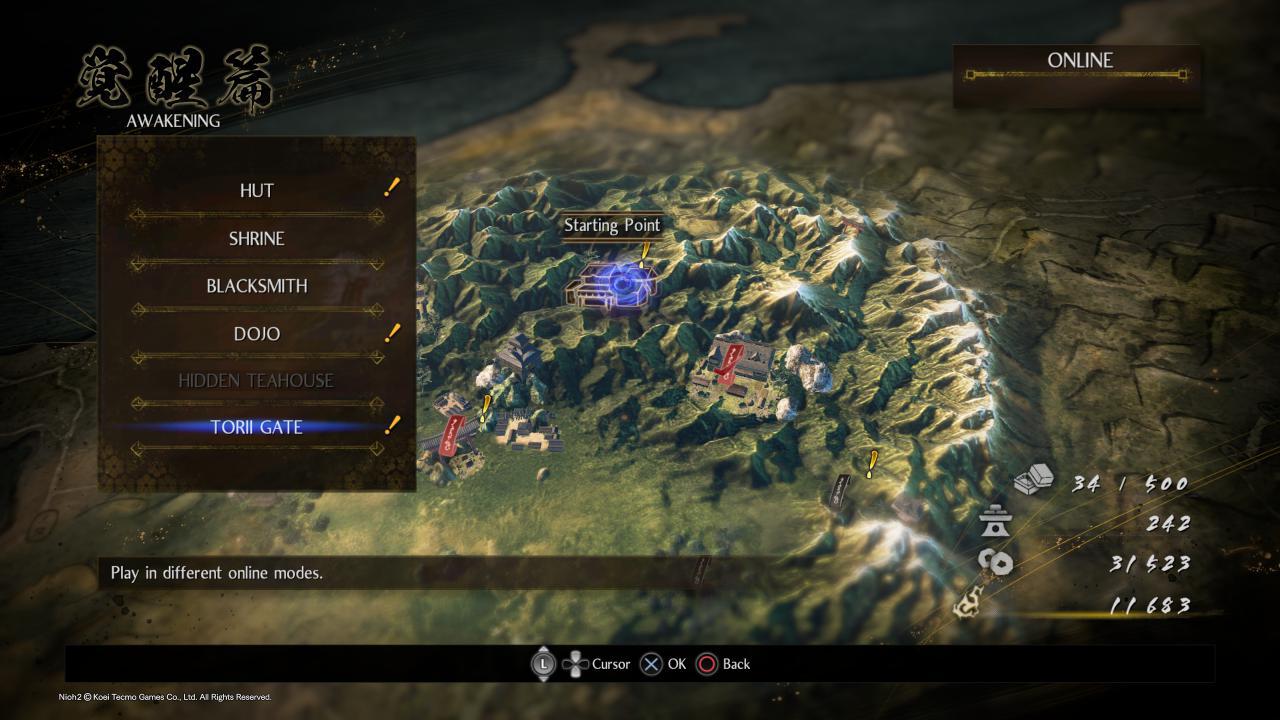 Nioh 2 Looks amazing. The level of detail on the textures and the different types of enemies is just astonishing. This game reminds me of bloodborne so much, the key difference being this is 60 fps which is what makes this even better.

Each and every level is unique and no matter how far you go, you will come back to your shrine and that is how the game ultimately rewards you. Each level is highly detailed and differs in size. The levels keep getting bigger in scale as you progress and the game becomes tougher as well. But you are also leveling up during this time but I would highly suggest you do side missions as well to stay ahead of the recommended skill level of a particular mission. 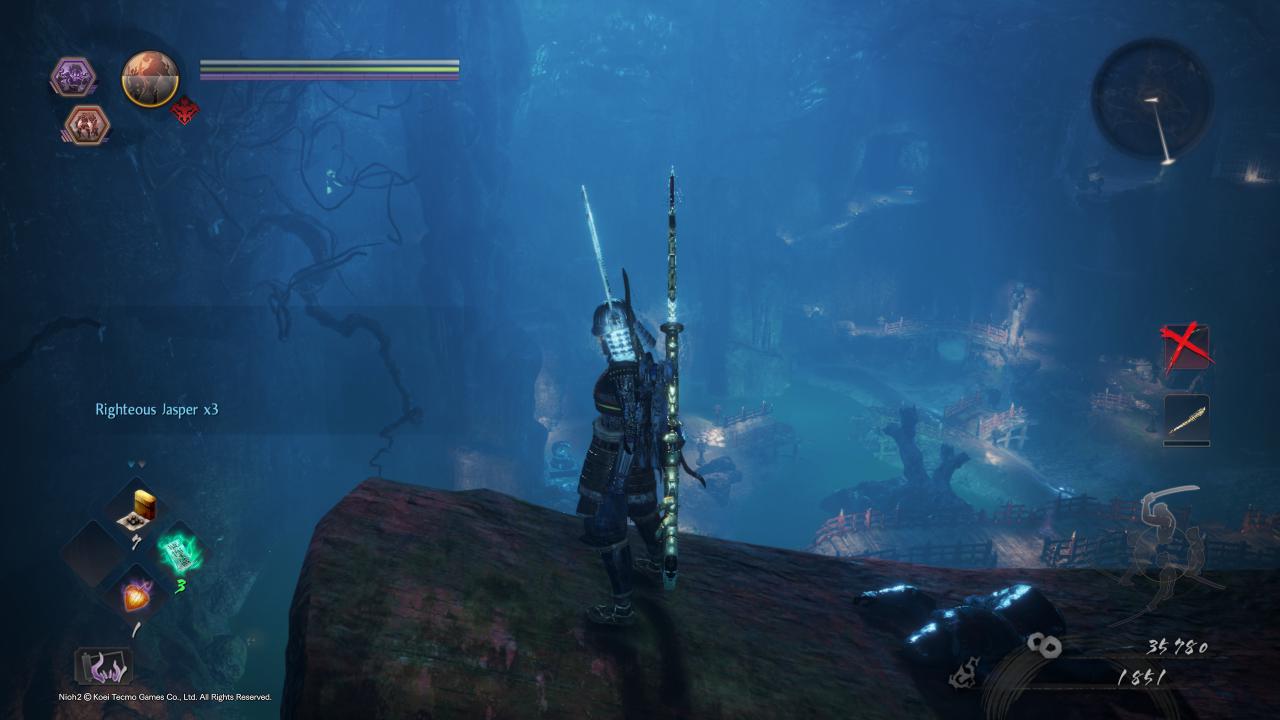 The soundtrack in this game is also something that you would normally like, the weapon damage sounds, the enemies calling and dashing towards you with rage is what makes this game so amazing. If you are having a hard time in real life and want to put out your anger somewhere, this is the game that you would want to do it in. Plus, you get handsomely rewarded in the process as well.

P.S – Thanks to Sony India for providing the game code for reviewing purposes.

Nioh 2 is basically a fast-paced souls borne game just like the original but with more rewards and harder difficulty boss encounters. With an emphasis on proper builds for your custom characters by getting good loot from the enemies, this game is a perfect choice for those looking to punish themselves in the gaming world as if the real-world wasn’t enough tough already. Nioh 2 also does justice to those who say that games these days aren’t tough enough to be worthy of their time, but well here it is and it’s asking for you to try it out.