Squaresoft dominated the Golden Era of JRPGs. But even then, when it comes to being a pop-culture phenomenon, Final Fantasy VII stands apart in a league of its own. The game brought the JRPG genre from its niche belongings in Japan to a worldwide audience and expanded the videogame genre outside its player base to the general audience. Players had been clamouring for a remake of this game since the PS2 era. When Square finally announced the remake in 2015, the reception was earth-shattering. However, few concerns arose when the developers announced that this would be a multi-part series. Square Enix has had a troubled history with Final Fantasy recently. There were some questions and doubts as to whether they would do justice to this beloved classic. 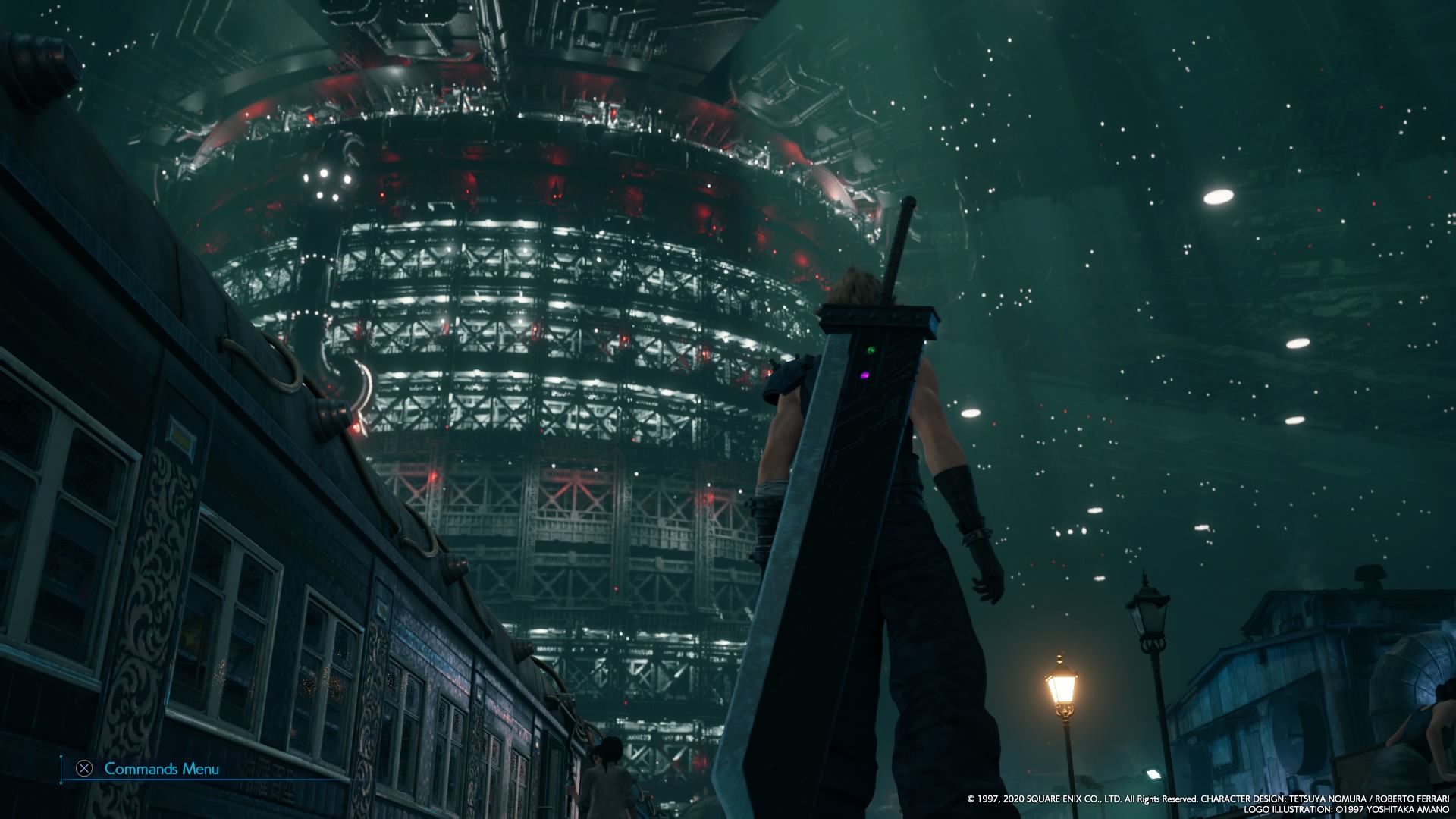 I had never played the original game, but I was familiar with the franchise (like every kid born in the 90s) through its spin-off game Crisis Core and the animated movie Advent Children. What grabbed me immediately about this franchise was its unique world. The world of Final Fantasy VII is one of a kind, from the cyberpunk dystopia that is Midgar to the mystical elements of the ancients. Final Fantasy VII brings that world to life in ways you probably imagined when you were a kid looking at the blocky polygon characters navigate their way around the pre-rendered backgrounds. There’s great attention to detail in every environment, be it the crowded sectors of the upper plates or the slums of Sector 7. The developers do a phenomenal job of convincing you that Midgar is a living breathing city. You feel the giant oppressive force that is the Shinra Corporation when you look at the massive plates shine their artificial source of lights on the slums. The inside of the reactors feels cold and devoid of humanity. Something as trivial as Graffiti and posters on the walls as well too further serves to elevate the tension between Shinra and the eco-terrorist group known as Avalanche, of which you’re a member.

While the scale and depth here are impressive, it isn’t perfect. You’ll notice low textures in some places and texture pop-ins in others. Some areas also have skyboxes with pre-rendered environments that make everything feel rather flat. Sometimes, this can be distracting, while other times, downright embarrassing. I can only assume this was Square trying to shimmy around the hardware limitations of PS4. If there’s any takeaway here, the pre-rendered environments sure do remind you that Square is committed to bringing all things from the PS1 classic. 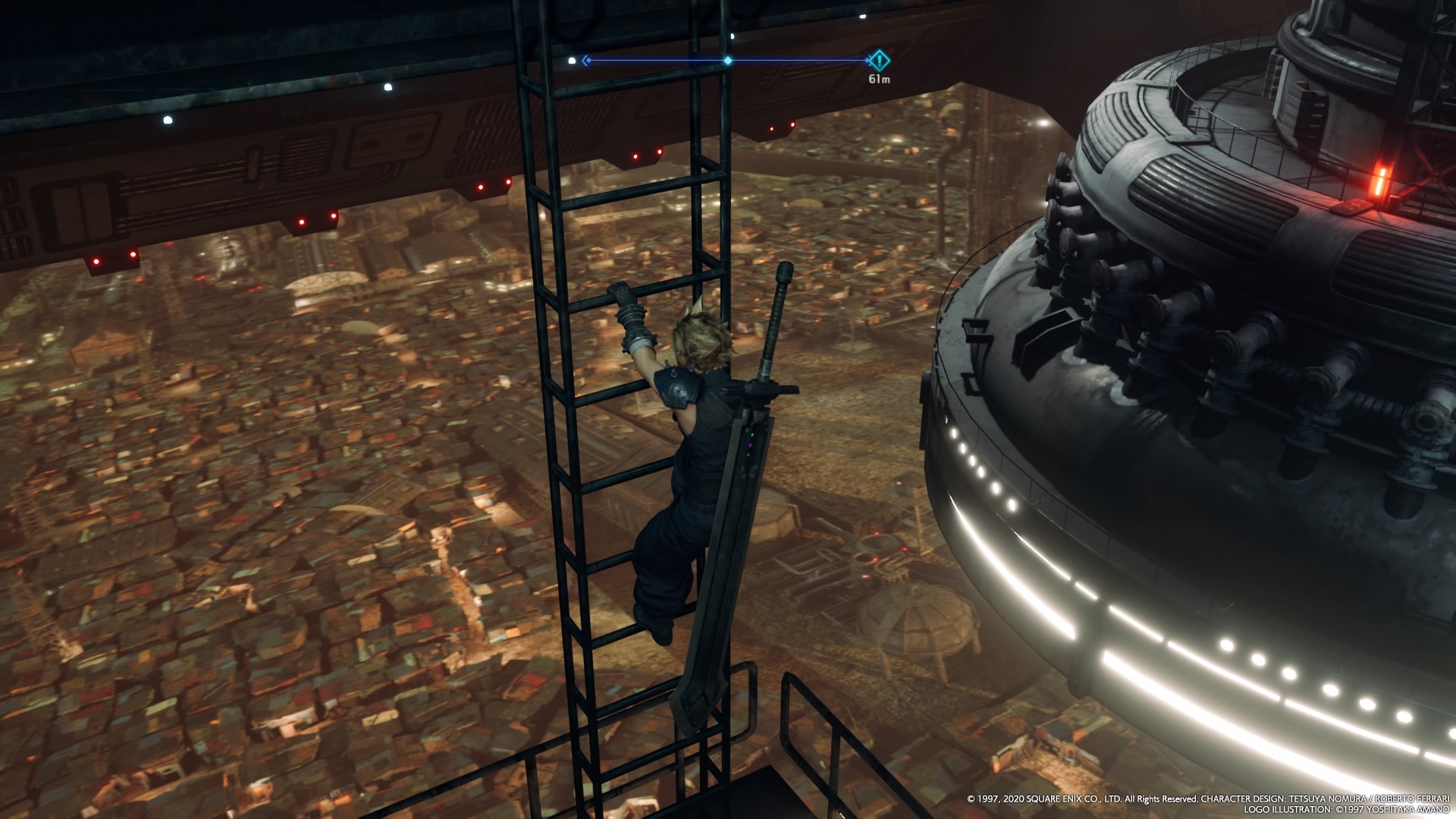 Final Fantasy VII Remake goes for more action-oriented combat introduced by Final Fantasy XV and improves on it in many ways. All the standard elements of an action-RPG are present. You have the basic attacks, blocking, evading, and a special attack. However, most of your gameplay will happen through the menus as you’ll be attacking the enemies aggressively to build up the ATB gauge, which is a requirement for casting spells and using items. When you open up the menu, the game slows to a crawl as you decide your next move in a very JRPG fashion. The rules of dance require you to make the best use of your move set to build up the enemy’s stagger meter. Enemies come with a massive variety of strengths and weaknesses.

Thankfully, you have four party members – Cloud, Tifa, Barrett, and Aerith. Each member feels like a completely different character with different move sets. Cloud is your traditional swordsman with a very untraditional sword. Tifa uses her fists and can build up the enemy’s stagger meter incredibly fast. Barret can do massive damage from a range. Meanwhile, Aerith can heal and do magic damage. Enemies often attack in ways that might immobilize a particular character, forcing you to switch to another one. Your ATB gauge builds much faster when you’re aggressive, encouraging you to cycle through different characters.

Limit breaks and materias make a return. Materias offer unique abilities when you slot them into your equipment. These range from elemental attack spells to passive healing spells. You can also link certain materias to form a unique combination of abilities. You can level up these materias by using them in battle, which will further unlock higher abilities. These materias help you build a character the way you want him/her to play. 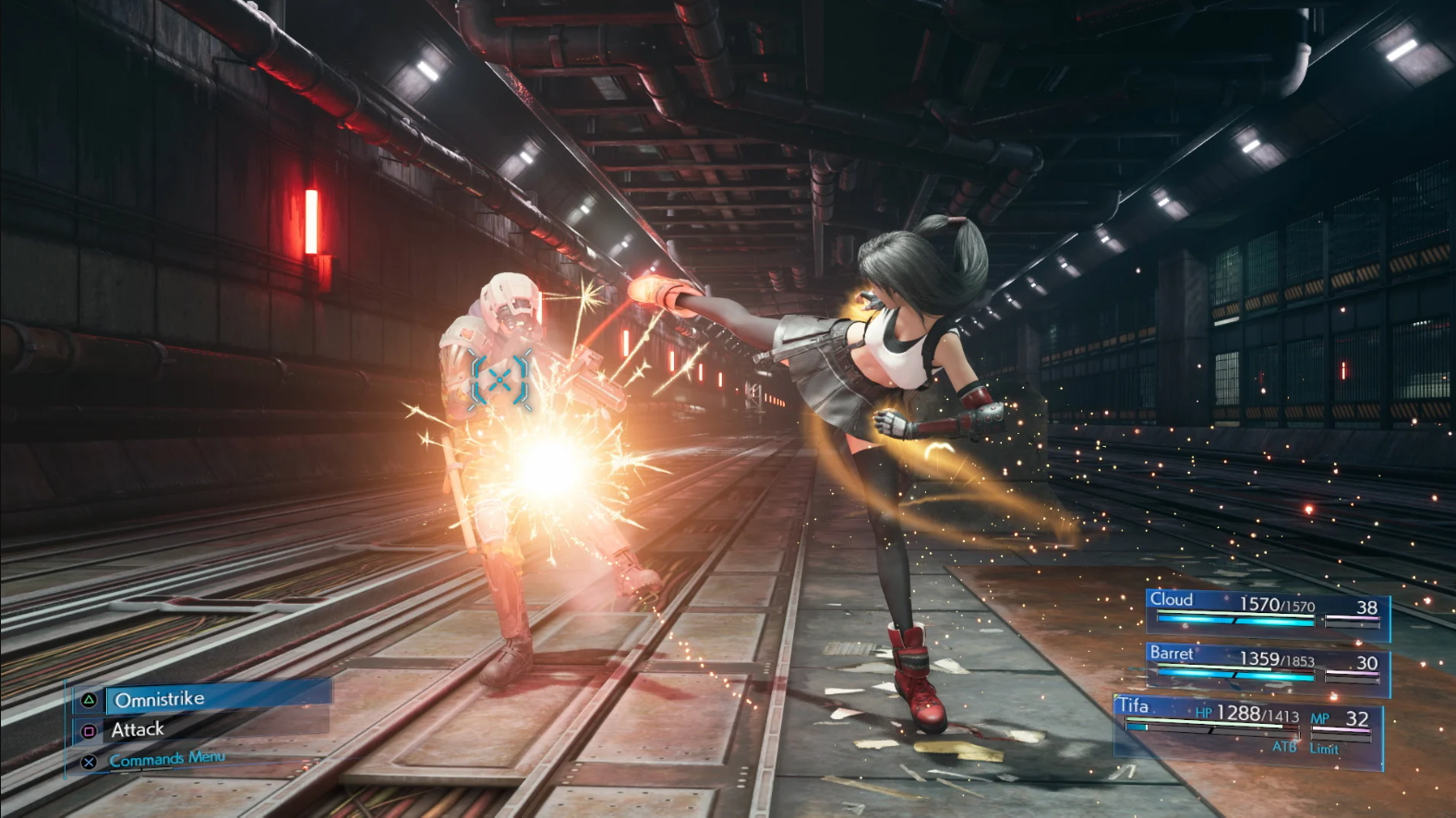 You can also use materias for summons. They have an impressive presence and come to you in crucial moments, but they aren’t overpowered enough to win the battle for you. You can use your ATB gauge to use their special moves, but for the most part, they act on their own accord. You’ll still be dependant on your skills to see yourself past the finish line.

Every weapon has its own set of enhancements that you can level up. These weapons also have a unique special attack. If you rank up the special attack 100%, you can then use it with other weapons too. Again, you’ll find yourself cycling through different weapons for just this reason.

FFVII Remake boasts an impressive set of boss battles. Most of them have different regions that you can attack and weak points you can exploit. These options further emphasize the tactical gameplay. FFVIIR’s combat is nowhere near as exciting as most action-RPGs, nor is it as complex as more standard turn-based JRPGs. But, it strikes a nice balance between the two sides and offers plenty of depth to keep you hooked till its 40-hour runtime. 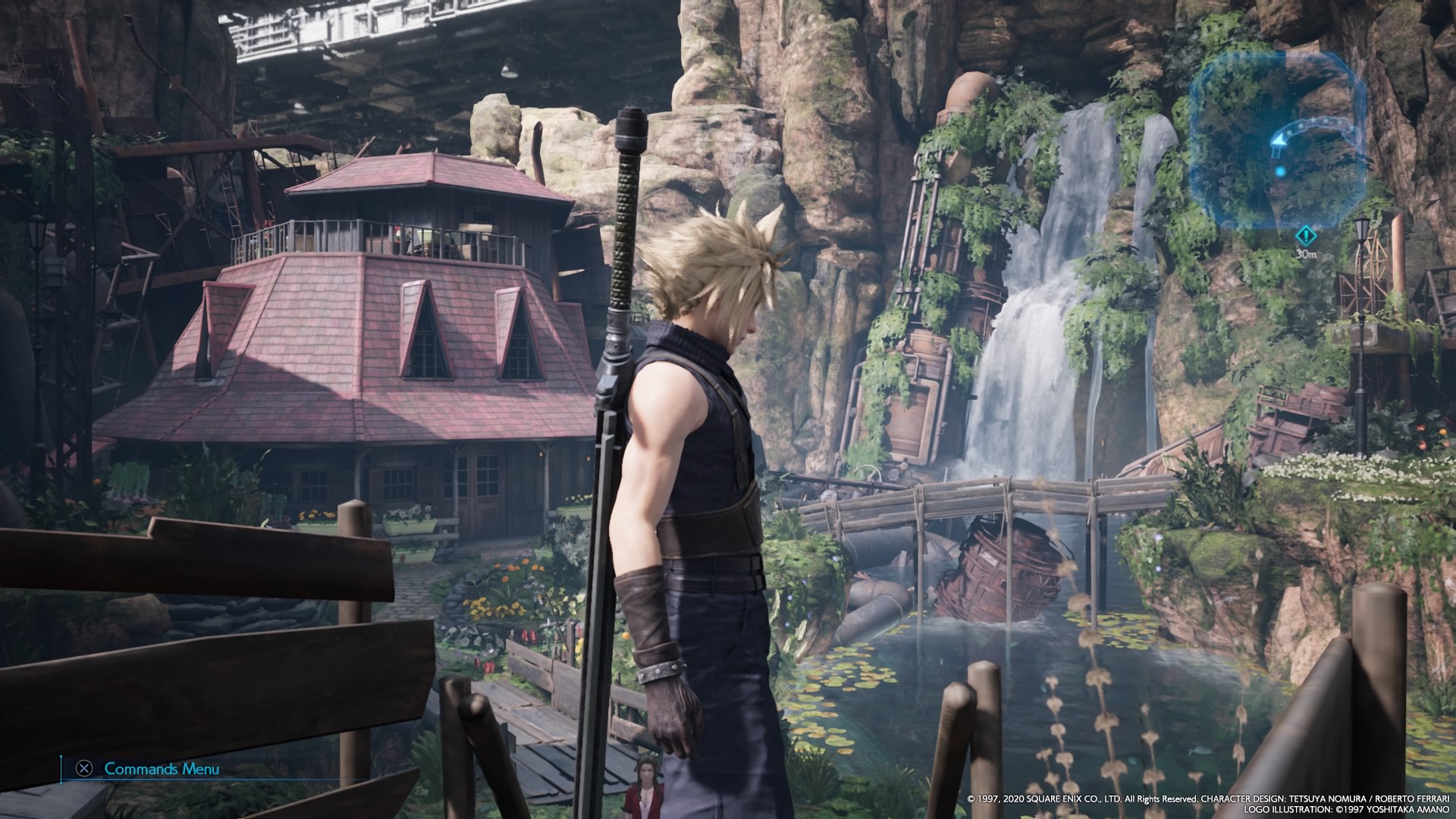 However, I have issues with some of the design decisions. If you happen to die in between your ATB animation and limit break animation, not only is the animation canceled, but your gauge is completely exhausted. This can be downright punishing at times as it tips the scales heavily in favor of the opposition. The camera is also a pain to handle during combat, the right analog stick is used for both moving the camera and switching targets. I often end up doing one thing when I want to do another.

One field where I have absolutely no complaints about is the music. Masashi Hamauzu and Mitsuto Suzuki take over the reins from maestro Nobuo Uematso, he does return to rewrite the official theme song ‘Hollow’. Masashi Hamauzu and Mitsuto Suzuki do an excellent job with the rearrangement of the original tracks while adding their flair to the newer tracks. The music ranges from traditional eastern style to rock and even electronica. The music shines in uncompressed 7.1 audio glory (which might account for the game’s insane 100 GB size). You feel the serene beauty near Aerith’s house and the massive chants and banging chairs when you enter the Colosseum. Play this one with headphones on, folks! 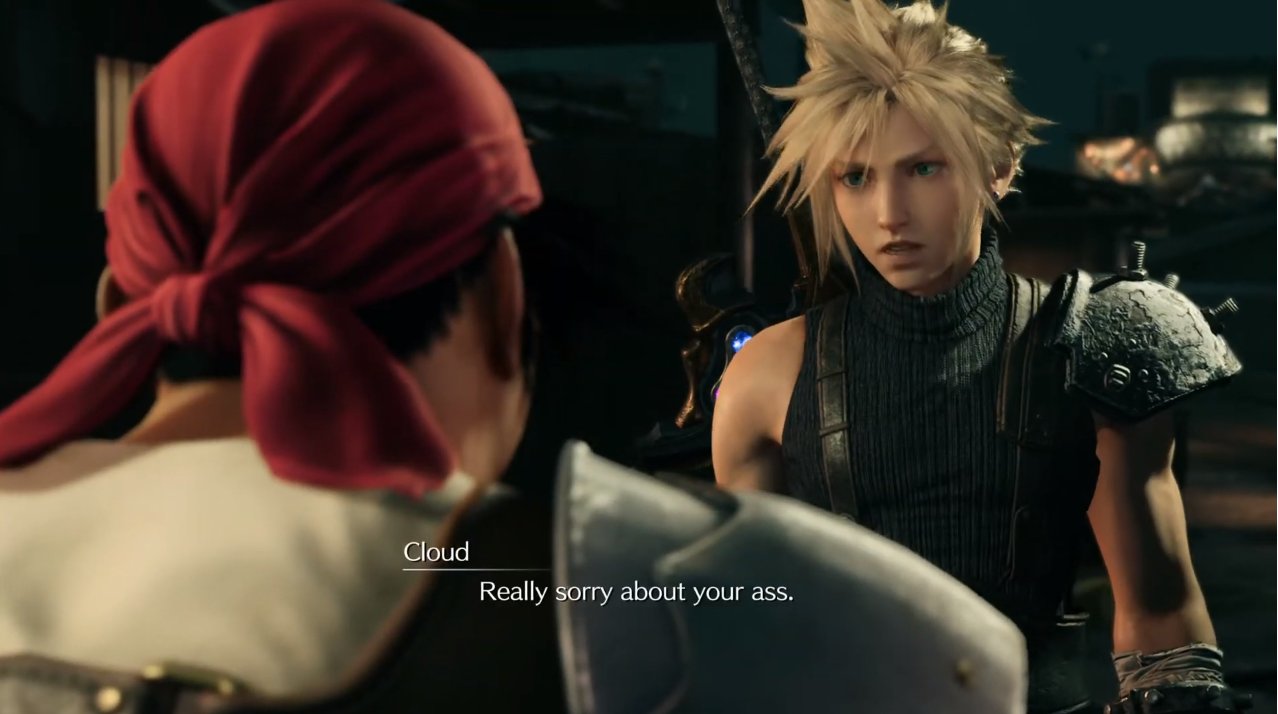 Square did not have to do much to hit the story out of the park. If my experience from Squaresoft days and FFVII’s royal status is any indication, the original already boasted one of the best stories in videogame history. But, they have cut no corners here. The story unfolds in most impressive ways and you care about everything that’s happening in this world. The characters are well-developed and do not feel like the caricatures they were in Advent Children. I had always thought of Cloud as this one-note edgy silent protagonist so it was to my great surprise when I found several layers of complexities and insecurities with him.  You find out that the one-note personality is an intentional effect and slowly fall in love with the guy as this facade starts to melt. I played the game in Japanese and the voice actors all deserve a pat on their backs, though Barrett took some time to grow on me. The clear winner here is Aerith. The developers want you to care about this character and she steals every scene she is in. And if I sound like I’m talking about a movie, that’s just how real these characters feel. FFVIIR would not be half the game it was were it not for the characters. And while many may worry about Square’s controversial decision to split the game into multiple parts, the game does build towards a particular climax and does not cut off midway. (More on this later) 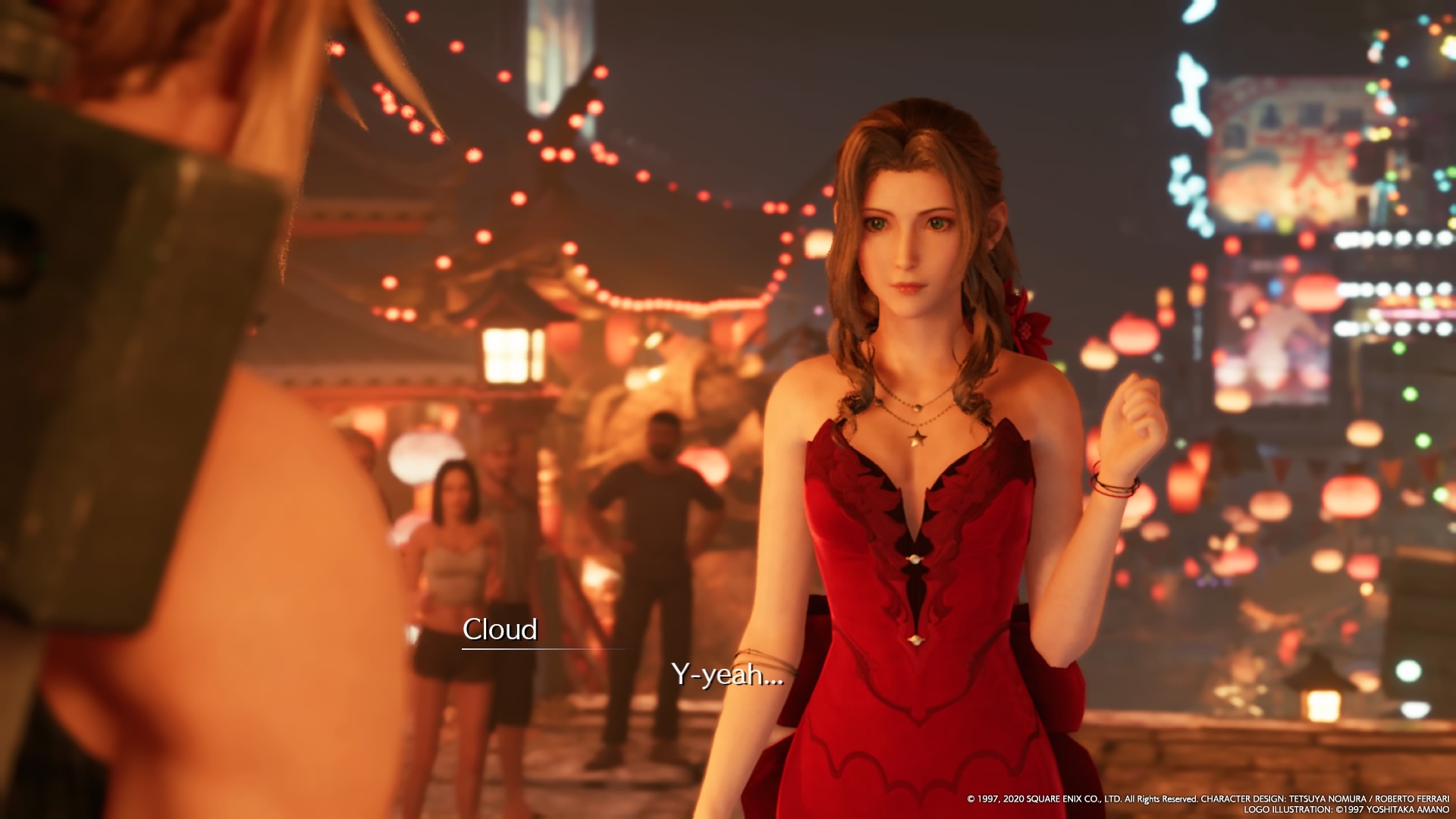 While FFVIIR has all the ingredients of a masterpiece, Some gnawing flaws hold it back. The game feels bloated in many places. Some interesting side quests help with the world-building while others feel like unnecessary padding. Every dungeon has a set of puzzles and obstacles that overstay their welcome by good 20 minutes.

The game is also buggy as hell. Sometimes NPCs will freeze in animation when I’ve turned the camera slightly away from them and then continue their animation when brought back in focus. Other times, my characters lose their attack scripts between fights after I’ve revived them, rendering them useless. The most game-breaking error I found was during a certain boss battle. The boss tossed Aerith, who clipped through a wall and landed onto a cutscene trigger. After the cutscene, my characters loaded onto the next level. However, the boss wasn’t flagged dead so my characters were still stuck in attack mode while he was hovering out of reach. In every next encounter with the boss, he would just disappear between the battle, never to return. I had to replay the last mission to undo this bug, which cost me 90 minutes.

The biggest setback is the game’s final chapter. Until the end, the game follows a solid and focused plot which I can assume is very faithful to the source. Studio-mandated padding aside, the game has solid core themes it never shies away from. This is why the ending feels so out of place, so devoid of any context or stakes. It’s a very poor execution of a high-concept ending and soured an otherwise great experience for me.

While it may have its flaws, FFVIIR sees Square make a valiant effort to bring back the Golden Era of JRPGs and reclaim their spot as the king of the genre. Every decision screams of ambition. The creative freedom displayed here might remind fans of Squaresoft days. But, boy oh boy, the price of freedom sure is steep.