The 2020s. The age of remasters. We have seen it, haven’t we? The fan-favorite old game that everyone wanted a sequel of, only to be met with a 60 dollars HD texture pack and some minor additions. But hang on, at least upgraded graphics look cool right? Imagine a next-gen console churning out all those games on your 4K display with no stutters and no crashes. Your favorite characters coming back to life at this age, blowing up stuff at a constant 60 FPS. Just what you would expect from the remastered version of a 20-year-old game right?

Welcome to Vice City, San Andreas. And Liberty City. Without the liberties, and with lots of vices. Welcome to what happens when people get money hungry and want a quick cash grab. Wait, you think we are talking about the game? A big NO.

Grand Theft Auto. The letters themselves represent some of the biggest hits in gaming history. A huge open world where you can do anything you dream of? Check. Missions around every corner? Check. Want to own someone’s car, buy a house, have breakfast, go to the gym, fly a jet, blow up a bank? Check. An entire living, breathing ecosystem in virtual space that has no limits to the possibilities.

And then, along comes the remaster.

Make no mistake, Rockstar knew exactly what they were doing. A company that has let out masterpieces such as Bully, Red Dead Redemption, and previous renditions of this particular franchise knows well how to captivate their audience, to say the least. But while waves of nostalgia are nowadays a marketable emotion in gaming, The Definitive Edition stands out as a shipwreck among those waves. Let’s take a look at why that happens: 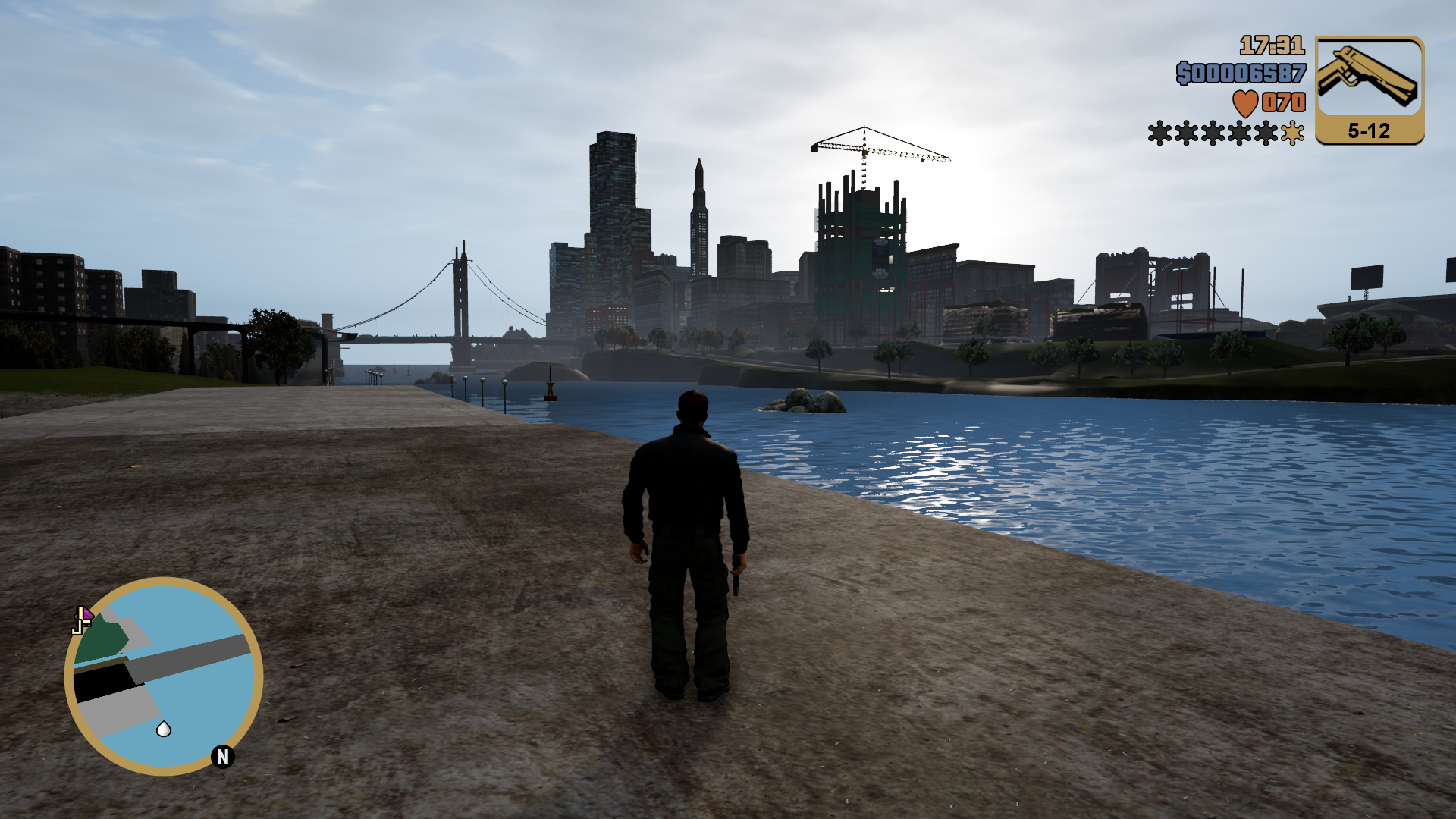 The first thing one would like to discuss is a remaster, and sadly, it’s a hot patch of hits and misses. Make no mistake, the environment has received a major overhaul (even though it might have come at the cost of Rockstar banning the modders). Though Liberty City has been remastered rather well (purely in terms of environment graphics), the other games have been changed vastly. While it’s nowhere near the level of details achieved by certain programmers, Vice City is still a captivating mixture of brightly lit up Miami during the day and streaks of vividly glowing neon as soon as the sun goes down. The environment, particularly during the day, has been transformed immensely so that modern gamers have a chance to enjoy it. Reflections have also been vastly improved to give the game a modern feel. 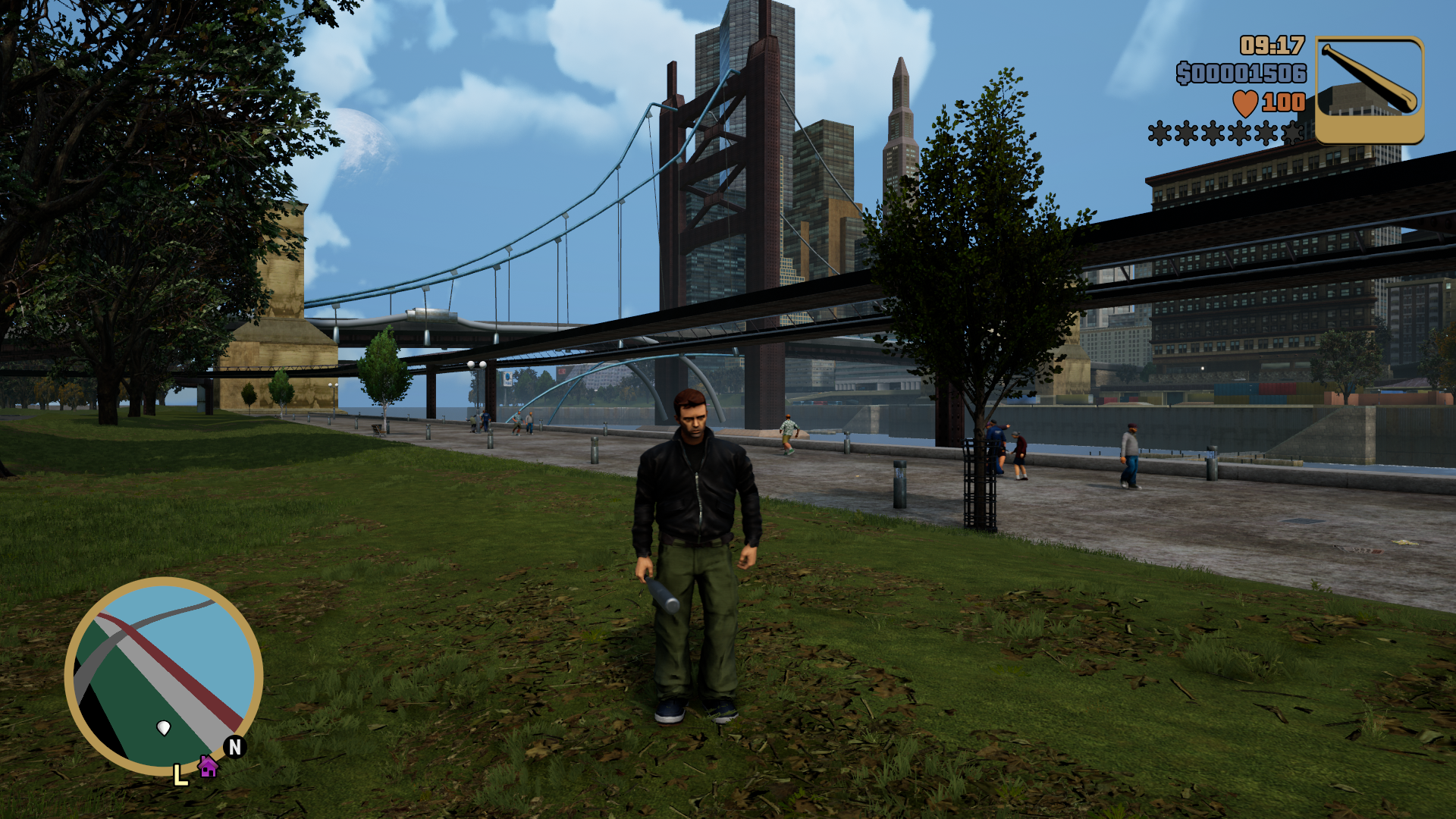 The same is true for Grand Theft Auto: San Andreas which has also met with the removal of the fog that surrounded the city and gave the illusion of depth and distance. While that has been met with controversy and the draw distance has resulted in some performance issues (detailed below), I, personally loved how the city looked while I was flying above it, and I often spent some time hovering above the city in my jetpack while reminiscing on my memories of the game. 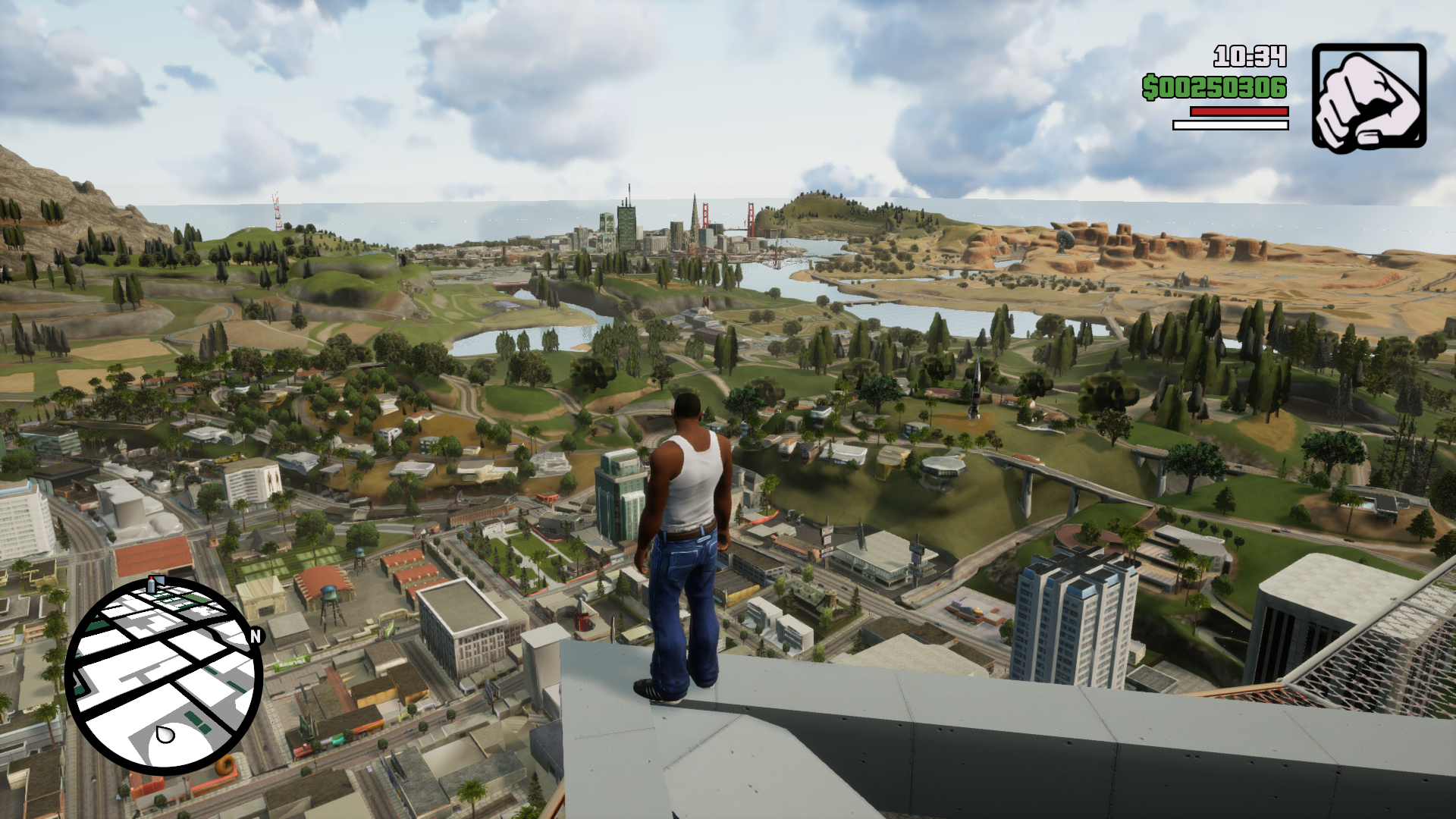 That’s where the positives of the game ended though. The changes to the environment, unfortunately, have been met with issues in brightness (or lack of it). Some scenes appeared extremely lit up, while others were too dark. Glass sometimes lost its presence as the characters sitting in cars popped up in odd ways. And then comes the character models. 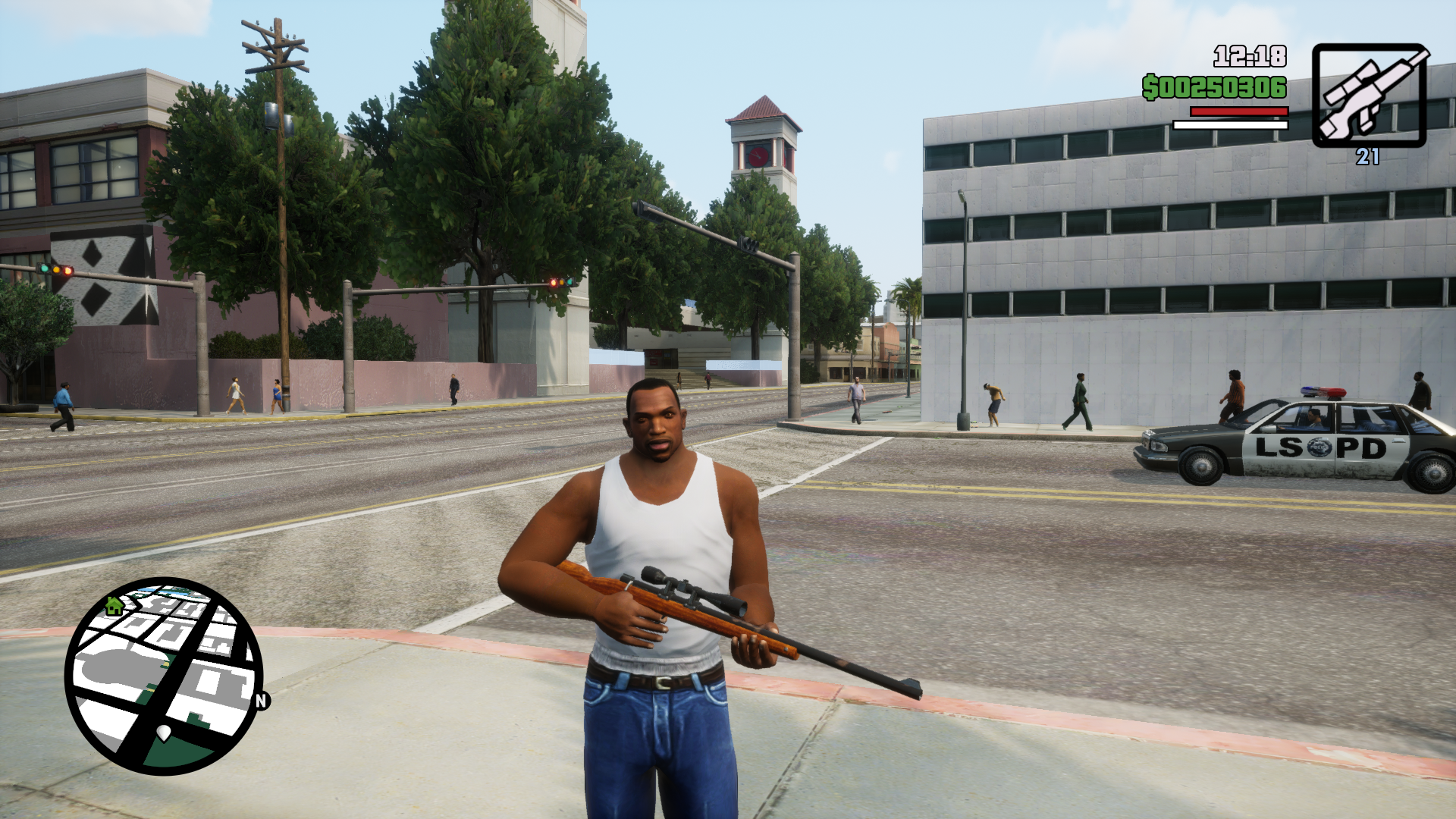 A horror story, to say the least, Rockstar has spared no effort in butchering the characters in the game. While Tommy Vercetti certainly looks better, the cartoonish style of the characters might not be for everyone. Even though I did not have an issue with it, what was grossly apparent was the complete lack of expressions on the face of the characters. And CJ, well, the face of CJ is a glitch in itself. Sometimes with fish skin, sometimes a black circle with two eyes, it’s difficult to say if the character is going for a gunfight or lying dead after one. That being said, let us address the other issues in terms of graphics. The huge blocky hands have been changed to look akin to what they should (ideally) look like anatomically, leading to players holding floating guns, telephones, and what-not in their palms. 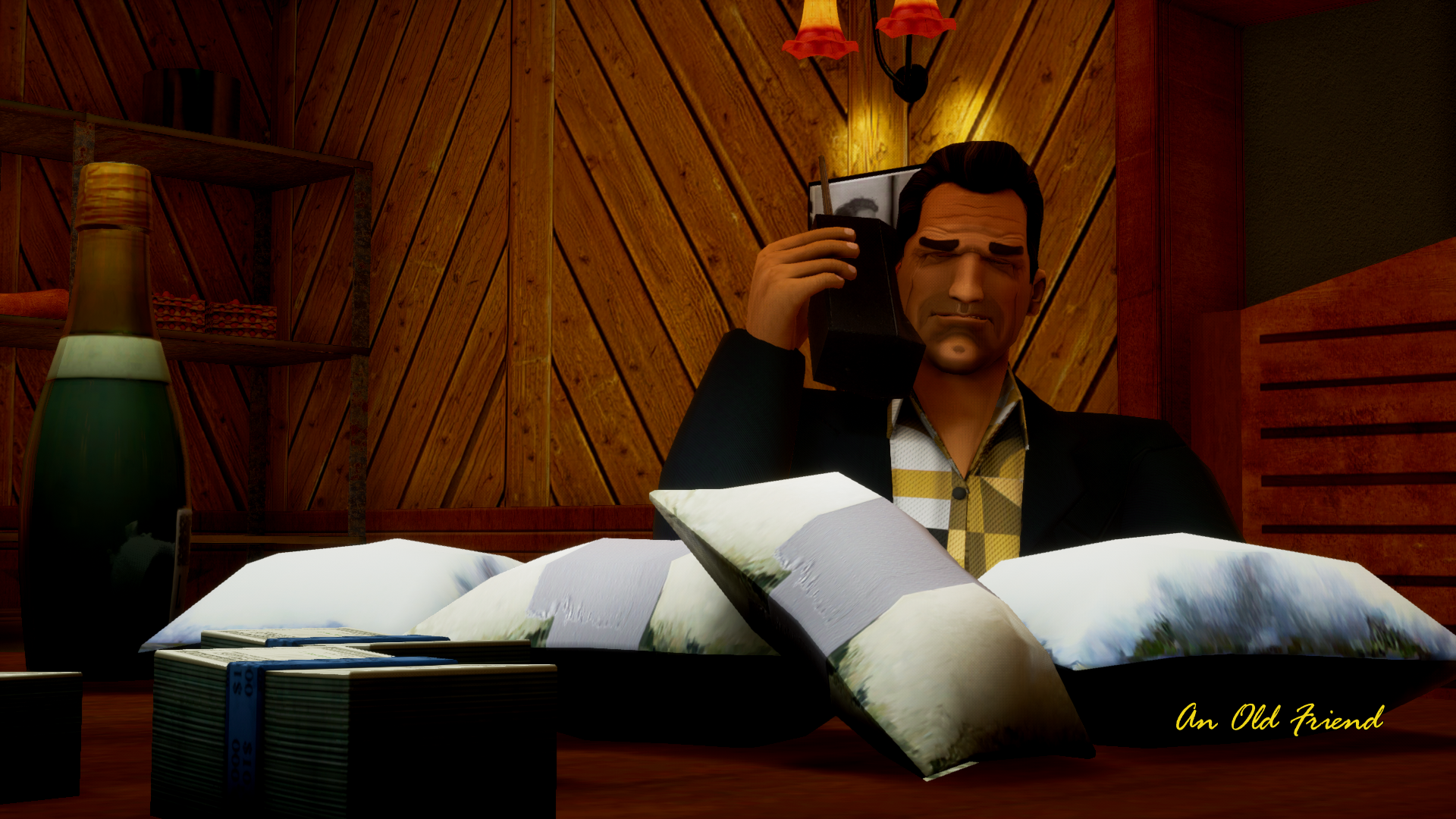 The removal of the same blocky feel has converted popular puns such as The Duff Nuts Donut into a complete circle. And if we try to run away from how horrible the characters look, we might be greeted by the rain. Torrential rainfall appears suddenly and serves little but to blind the player completely. Something that even a patch could not fix till now. You think this is it, but no. The game, while receiving a graphics overhaul has somehow received an English overhaul too, and has included a new activity that will at least find amusement among grammar Nazis. A plethora of spelling mistakes simply accentuates how badly the developers slashed the game into bits and pieces. This is, if possible, even worse in GTA 3, which, being the oldest of the lot, falls victim to inconsistent lighting and far more glitches than the others could ever have. 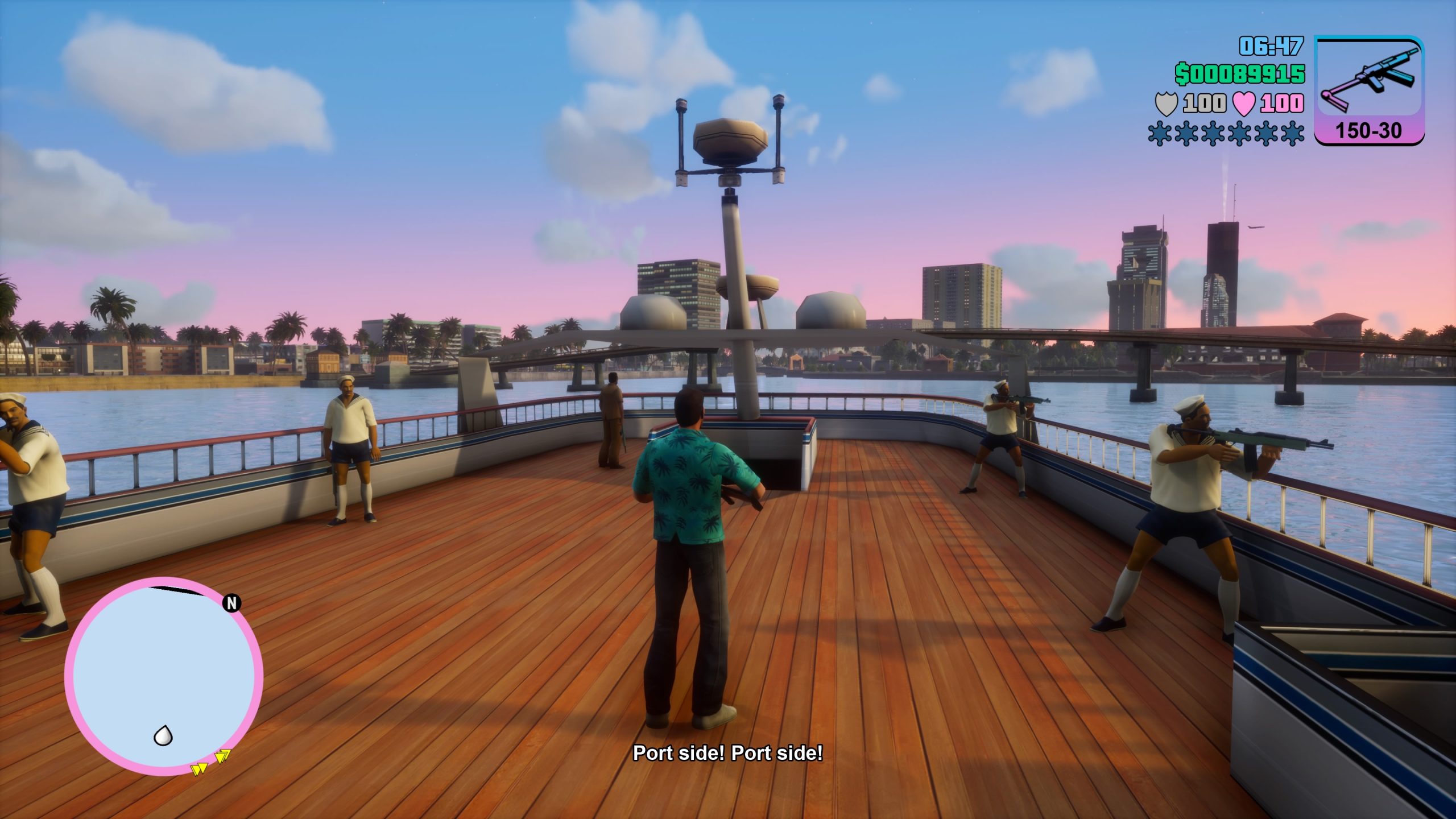 You can certainly increase the draw distance but it does come at a cost. Regardless, one would expect a remaster of a game two decades old, to run without next-gen consoles breaking into a sweat. Again, wrong. There are two modes – performance and quality. Performance mode, as the name says, is supposed to make a game run at 60 fps smoothly, in which GTA fails. In a rather horrible way.  Frame drops are quite common, to the extent that the game crashes completely and a lot of my in-game screenshots were actually the bug reports that I sent to Sony when the app stopped suddenly. Cut-scenes often get stuck near the end of missions, making the game quite frustrating and it gets worse in quality mode, where the PS5 does run at 1800p but with extremely inconsistent 30 frames per second. 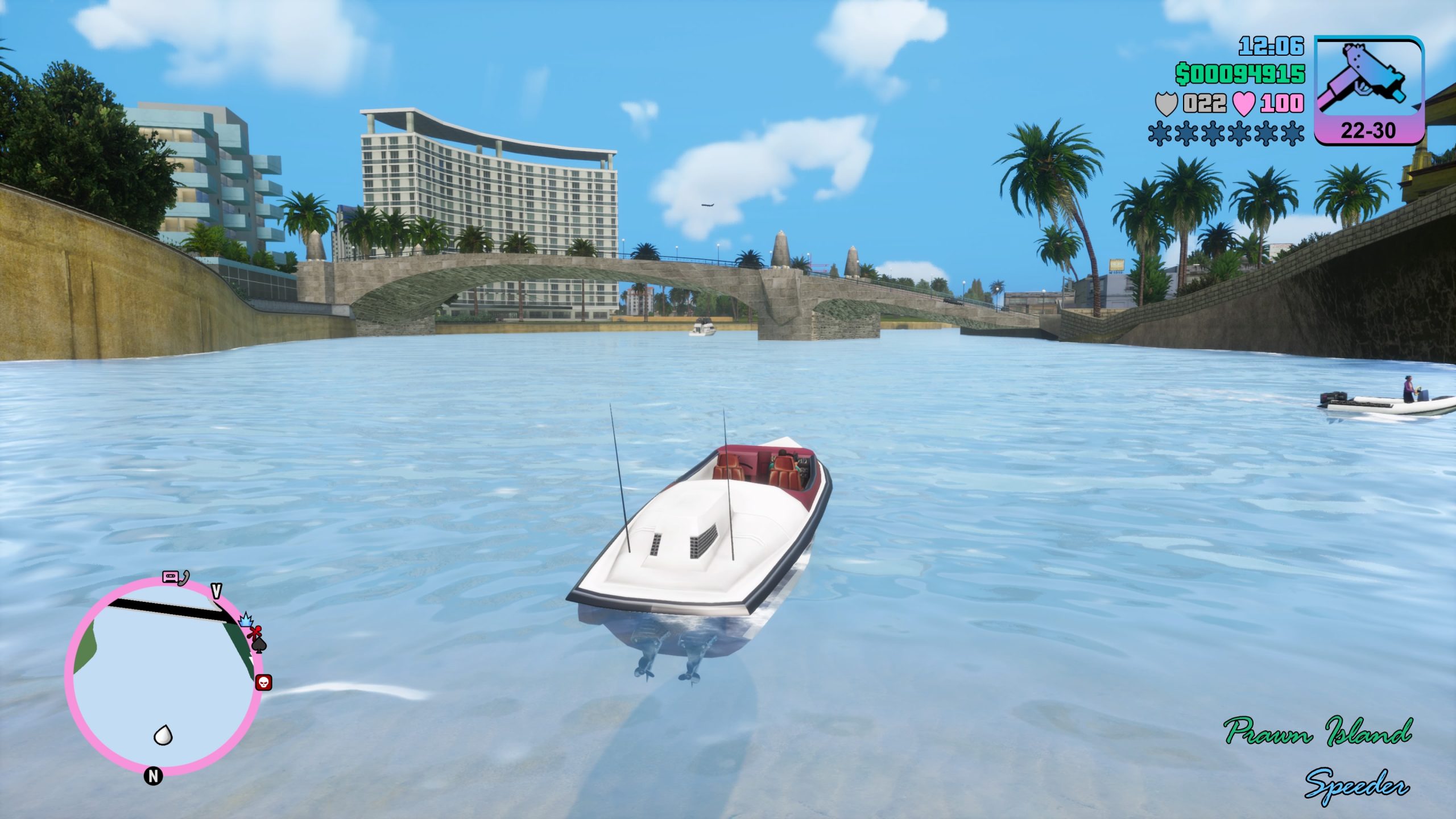 The PC version thankfully runs great. Over 90-100fps on a Ryzen 5600x and a GTX 1070 PC with 16GB of RAM, the game has no issues when it came to consistent frame rates. The new update fixed some of the small bugs but the issue with rain effects isn’t fully fixed as of writing this review as it still blocks the view of the player playing the game. The fog missing in San Andreas white looking at the entire city from the top of a building just doesn’t feel right anymore as the fog added a depth to the city’s landscape and building. But it did unlock the power of the field of view that classic games couldn’t see much before due to tech constraints which did add a layer of fun while flying in the air and looking at the city below from the skies, but that’s about it. The particle effects near beaches and lighting during the day though are done well. 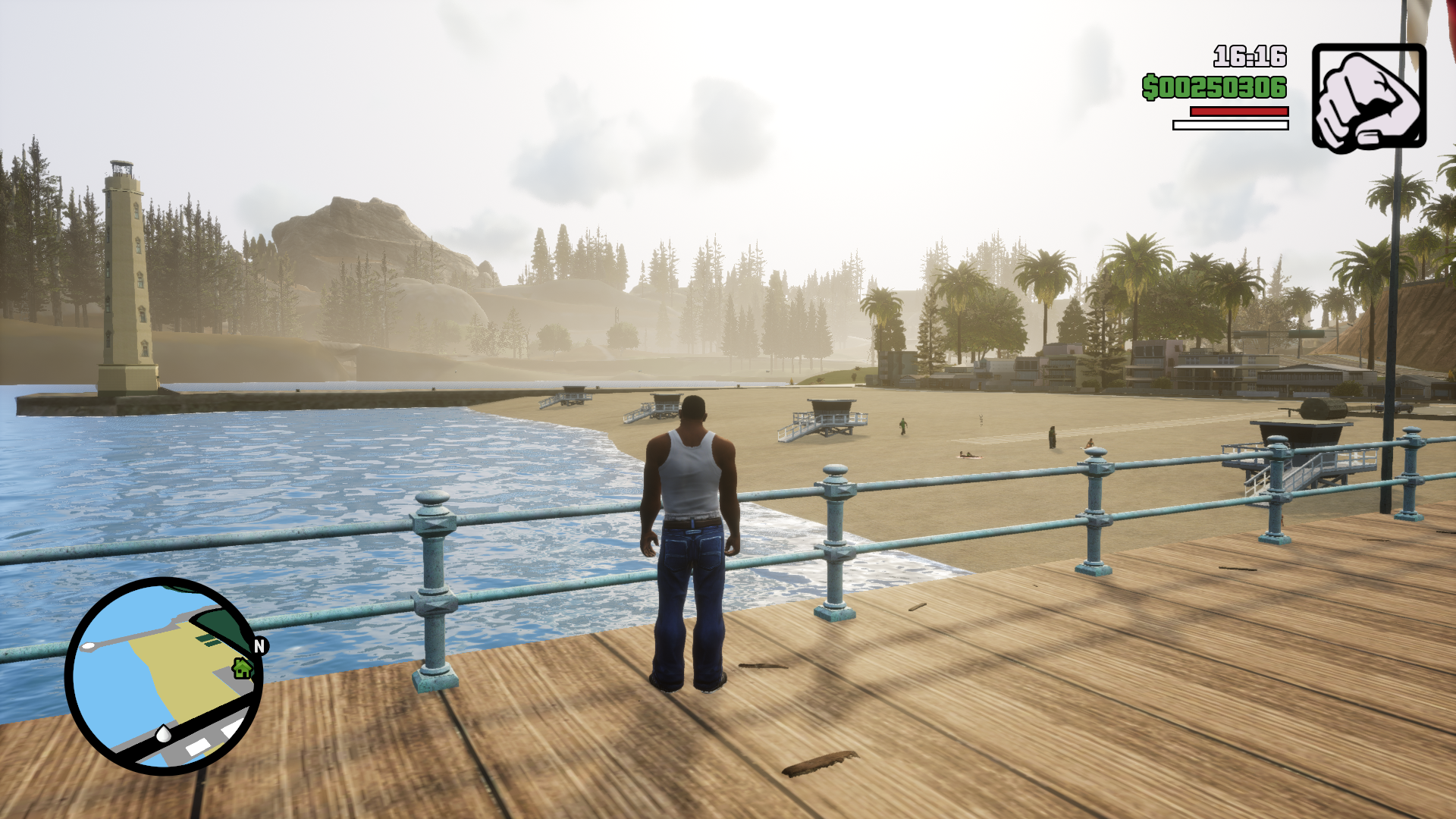 Now, let’s come to certain pros and cons. Load times are extremely fast, which is a no-brainer considering how the PS5 uses an SSD. The weapons wheel helps to switch out gear rapidly which is a nice feature. And there are lots of checkpoints in San Andreas, which helps a lot for casual gamers who are simply trying to get the game over with. The guns feel good to use in San Andreas due to the auto-aim, which is extremely snappy, and even driving feels fun with no notable negatives. The addition of a map in the menu makes driving around faster and the soundtracks are also great to listen to, even though some of them are missing due to licensing issues (which diehard fans might notice). 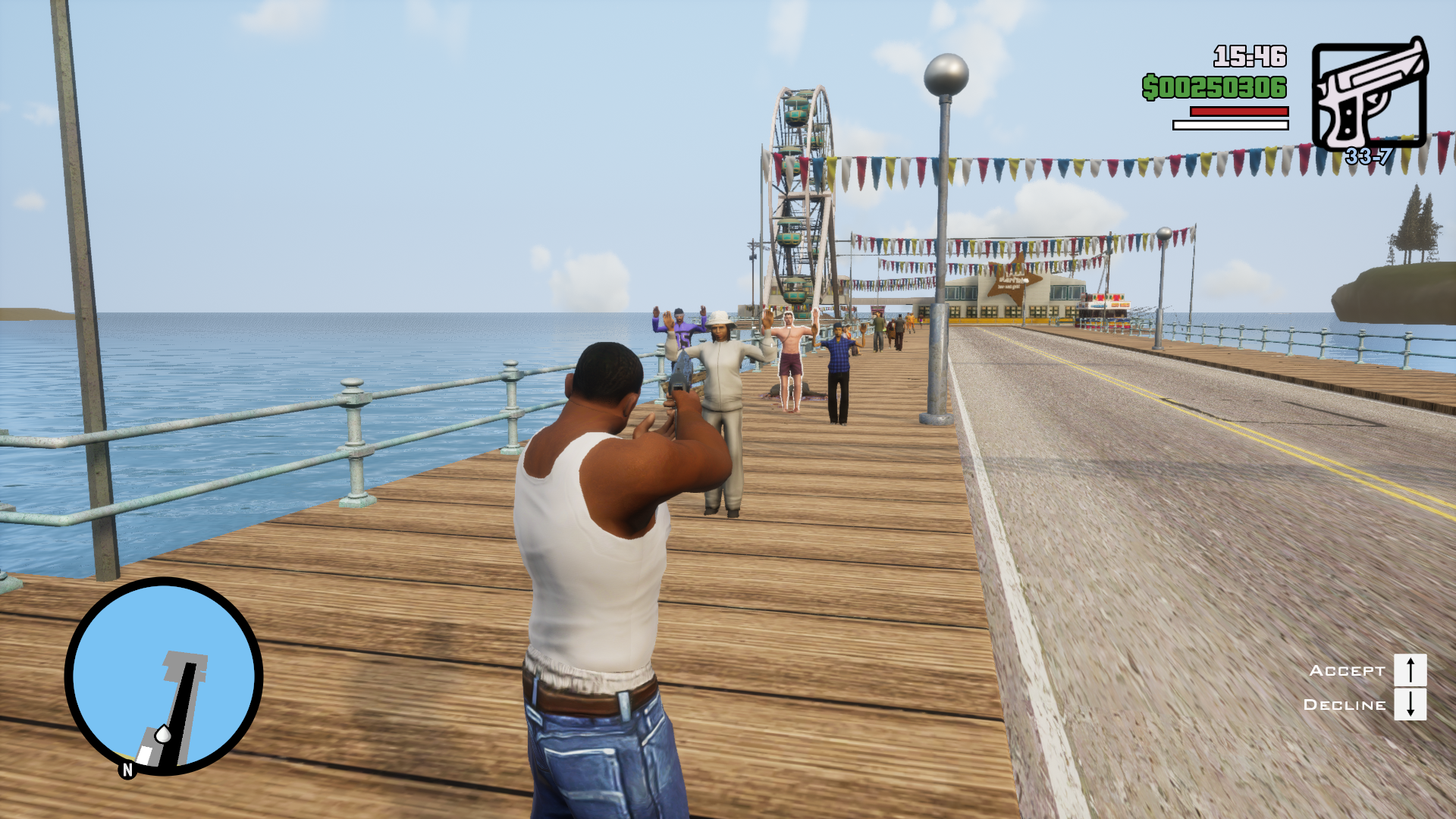 That being said, let’s come down to the negatives.

Firstly, the way certain guns still force us into an FPS mode to use, thus making their use quite difficult. Also, while aim assist is quite good in San Andreas, it’s pretty poor in the other two, especially considering how the enemies tend to rush you. If you somehow die, while you respawn at the last checkpoint, the entire mission starts over in GTA 3 and Vice City. Swimming will still kill you in both of the games, or bounce you inexplicably out of the water, and the environment itself acts as a barrier to let you play the game properly. NPCs sometimes tend to run circles around you, objects suddenly tend to disappear and reappear and missions occasionally end while you are still doing the last objective. Buildings refuse to load properly leading to huge spathes of texture-less objects and cars inexplicably tend to explode with the slightest bump, that is, if they do not start to fly first and if you do decide to get off them and walk around, invisible walls sometimes don’t want to let you proceed.

Disclaimer: Thanks to Rockstar for sending us the game codes for both PC and PS5 Platforms for this review.

Grand Theft Auto: The Trilogy – The Definitive Edition shows how a company, that mostly churns out games that are jaw-dropping can make something that will amaze you, but for all the wrong reasons. Restriction to purchases of the original games themselves at launch, coupled with the current version being a broken, buggy mess that was fixed only on pen and paper in the recent patch leads to something that most gamers would want to steer clear of, especially at this price point. That being said, GTA is GTA and while the opinion is rather subjective, the environment does look nice. If you can overlook the bugs, glitches, and performance issues (somehow), the game is still, at its core, a love letter to 90s kids. A world, even then, had no boundaries on what your character could do. In a world where you can do live out a rather mundane day on one occasion and take the law in your hands on the next, GTA is, and will always be a masterpiece in the history of gaming. However, it’s simply a shame that this Definitive Edition, somehow, will fail to define it as one.