Cooler Master came up with their new headphone lineup which was the MH752 before they introduced the MH650. It is one of the best sounding headphones I have heard at its price point, a review of which you can find Here. The MH752 offers way better sound quality and soundstage than the HyperX Cloud series without being muddy while at the same time providing an amazing audio communication via their microphone.

Today, thanks to Mr. Sanket Naik (South Asia Manager of Cooler Master) for sending over products from their new lineup of 600 series headphones, the MH630 and the MH650 for review.

In this review, we will be looking at the MH650 and check out whether is it really worth the price tag of approximately 5000 Indian Rupees and if it is better than the competition.

Before diving into the technical aspects and sound quality, let’s look at the physical appearance of the headphone itself. 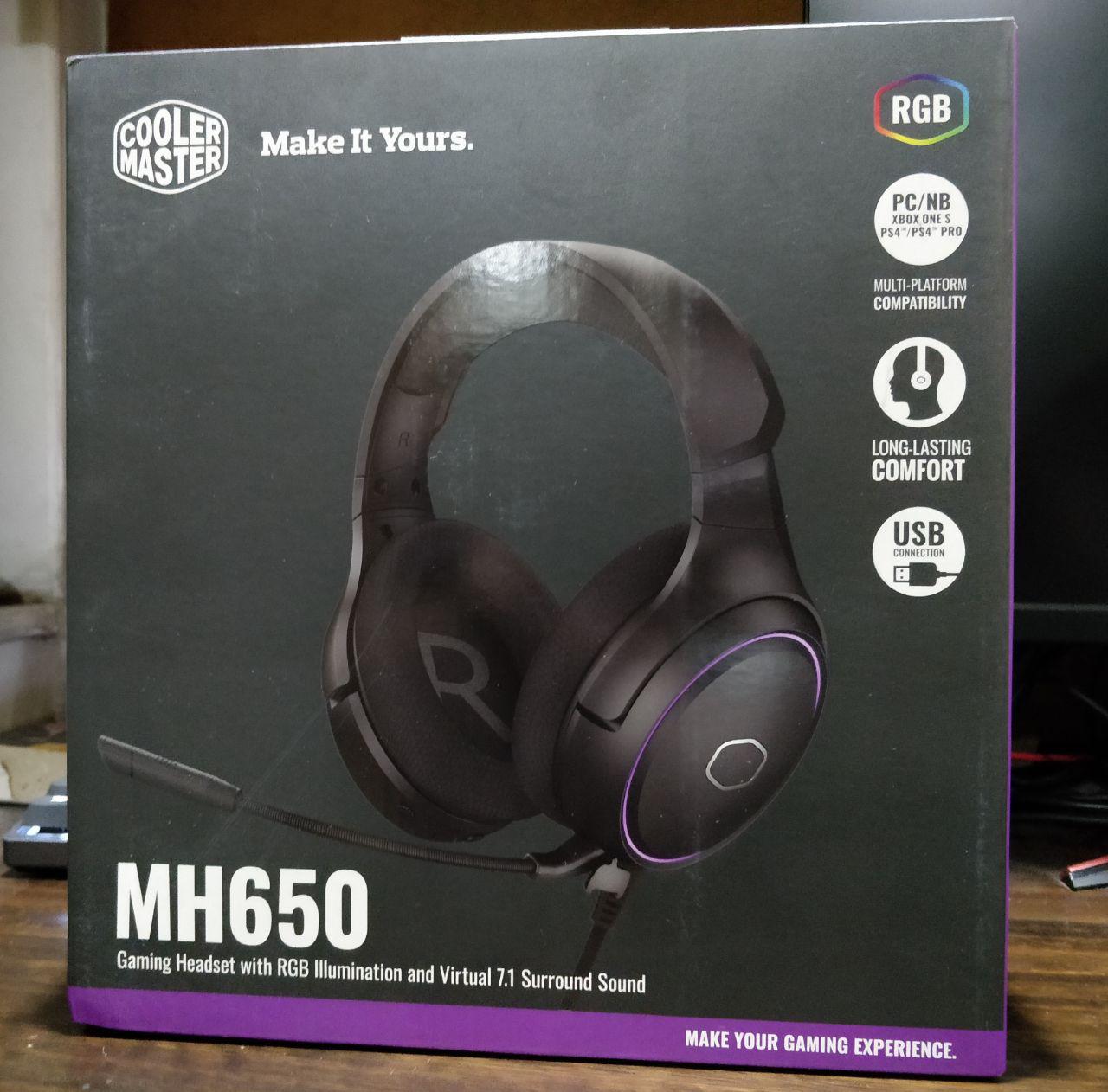 Inside the box, we find the headphone itself and the mic into its detached state. 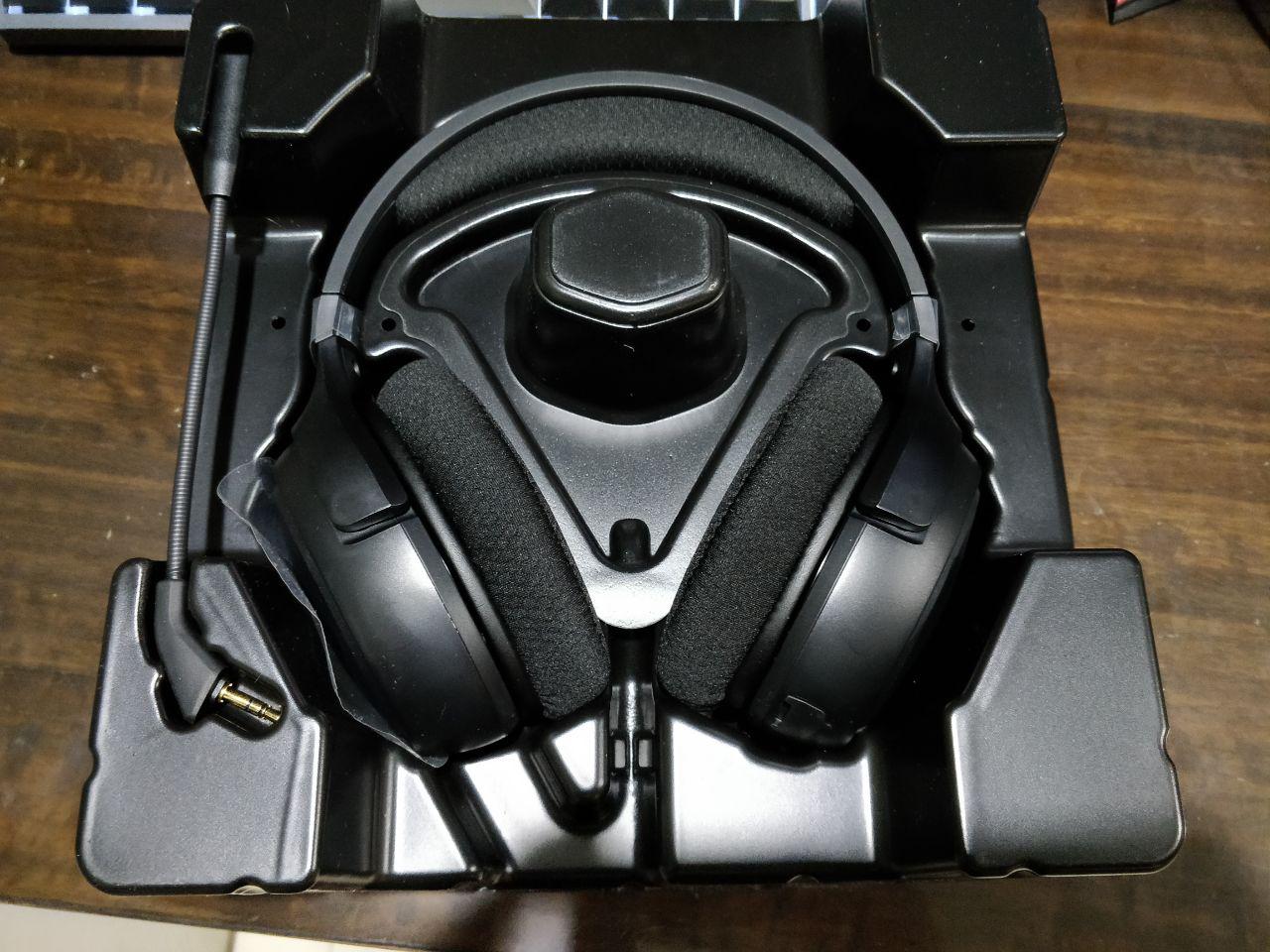 Both The Mh650 and the MH630 (separate review soon) comes with the same black portable traveling bag which comes included with their Higher-end headphone, the MH752. It is good to see Cooler Master including this on their lower-mid end headphones as well, as we don’t often see other brands doing this. 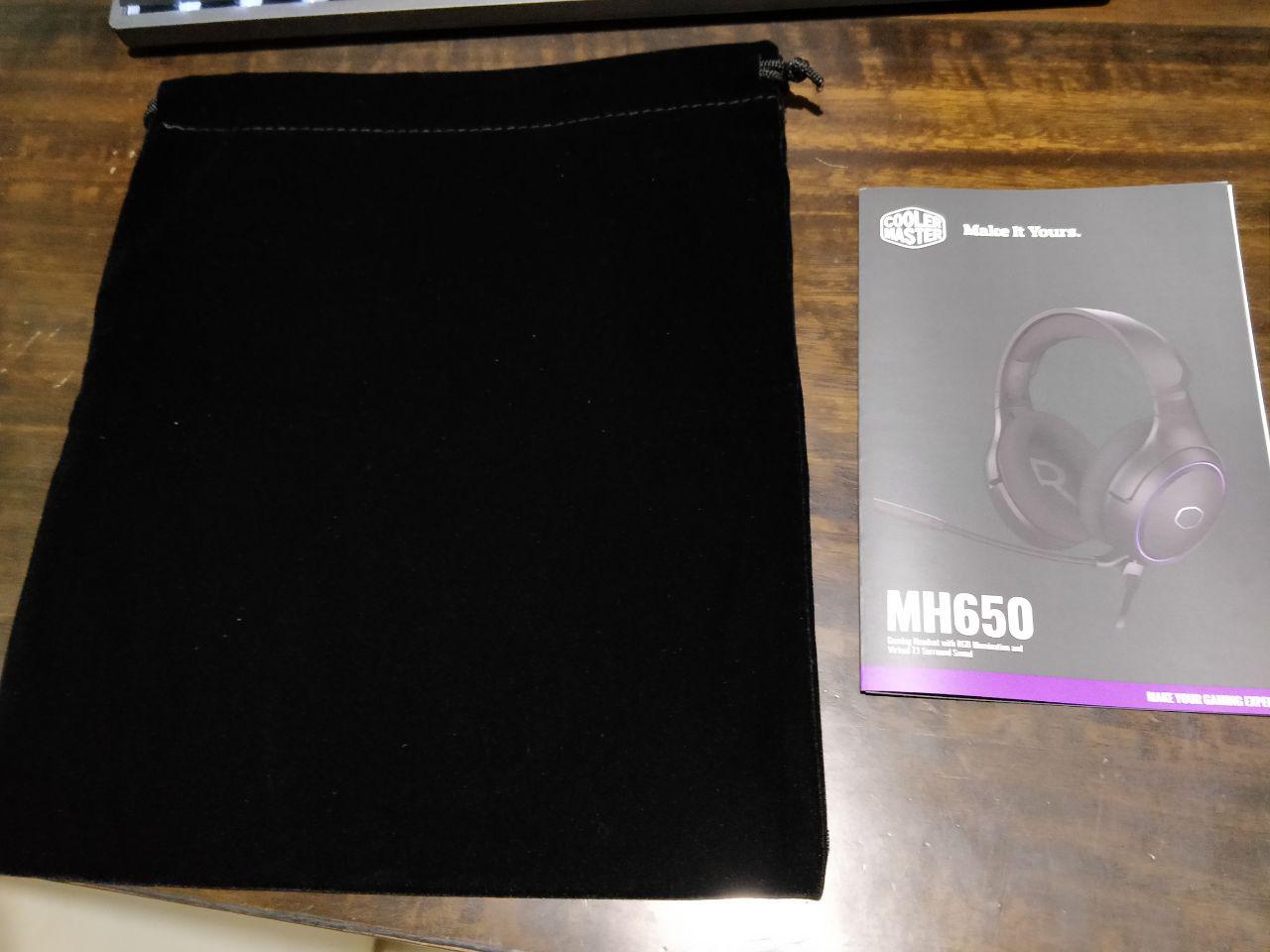 Now coming back to the headphone itself, I have personally used lots and lots of “gaming” headphones at this price point and even higher but the amount of comfort I have found in these headphones has been the best.

The earcups and the headband provides a really sturdy and comfortable experience when I am wearing them and I haven’t noticed any kind of fatigue while wearing them full time almost every day for the past month for 12 hours every day.

The headband has thick fabric providing maximum comfort and durability even at longer gaming sessions. The earcups have breathable cushions as well as providing ample air to prevent sweat.

There is no kind of flex in this headphone as well which further provides proof of durability. Both sides rotate and can be placed in the resting position when not in use or can stay flat on the table. 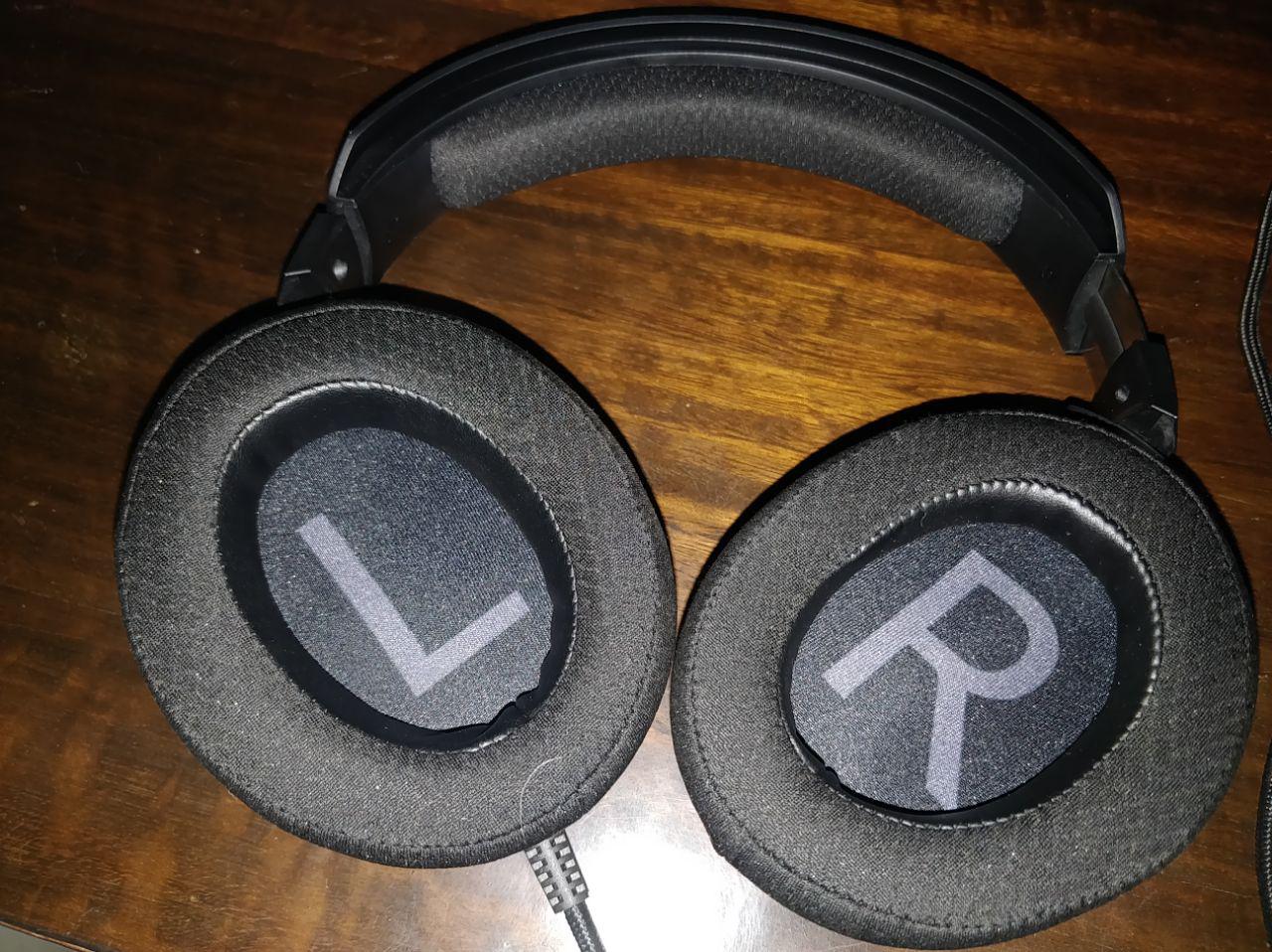 The headband slider has levels as other headsets and the testing unit I received had an issue where it would come down automatically due to the weight but has been fixed in the final retail unit after Cooler Master received the feedback about the same issue. Props to the team for taking feedback seriously and fixing it so soon. 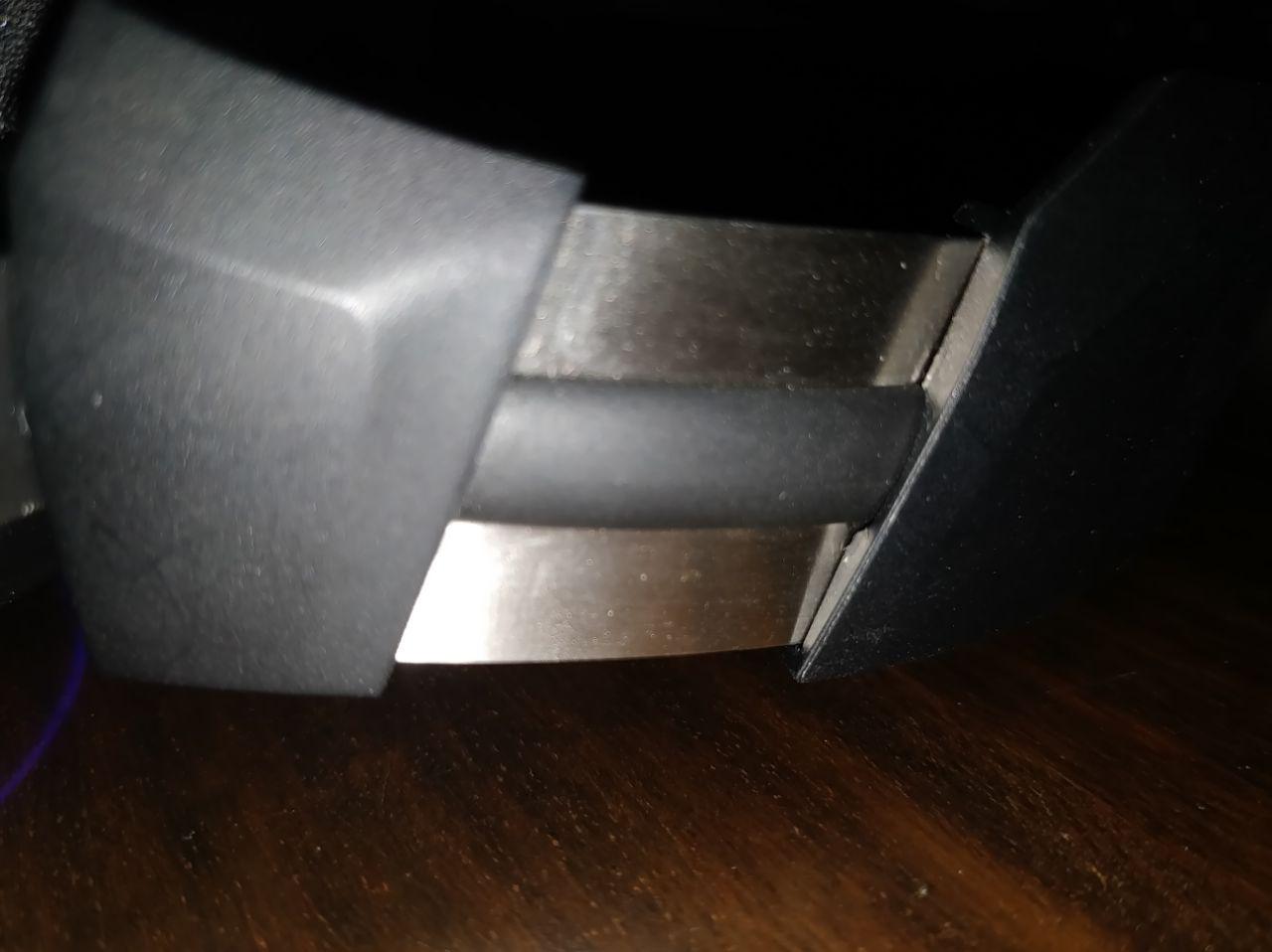 The Left and right sides are clearly indicated as you can see from the picture below. 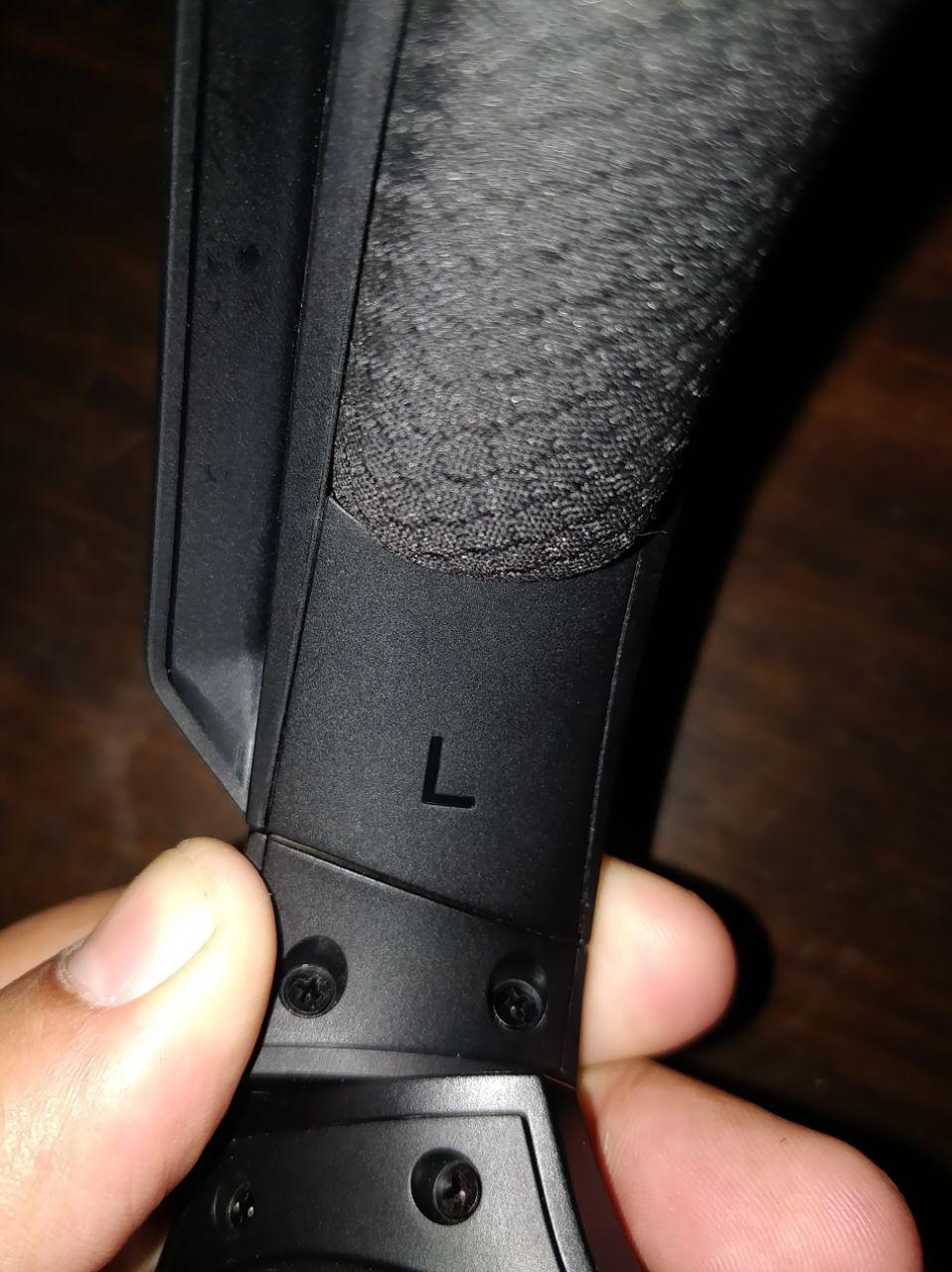 On the left side, we have the volume scroller, mic mute switch, and the mic port. They are positioned properly and it is easy to differentiate between them while touching without seeing during gaming sessions.

The mic mute on/off button is tactile and feels solid while using it. 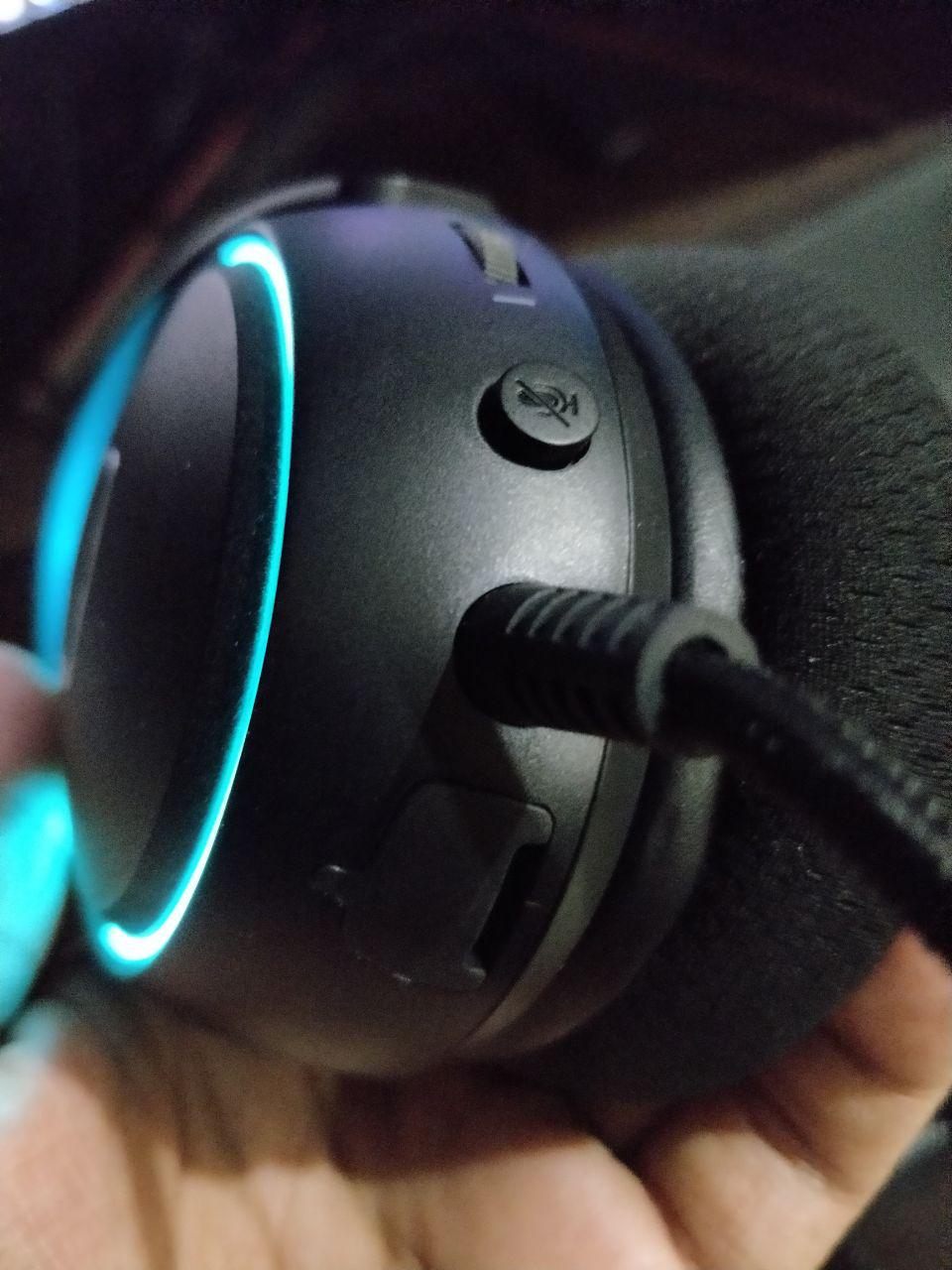 The MH650 has RGB on both sides and can be manually controlled via the Master plus software or can be toggled between its three different cycles by pressing on the LED button on the right side of the headphone and also can be turned off with a 4th click if you do not want to see the RGB effects.

On the right, we find both the RGB controller as well as the 7.1 toggle switch to turn it on/off. It would have been better to have an LED indicator below the 7.1 buttons to show the status as to if it turned on/off. For now, we can only know about it by opening the Master plus software and manually checking it out.

There is also a little RED indicator indicating that the headphone is getting power via the USB cable. 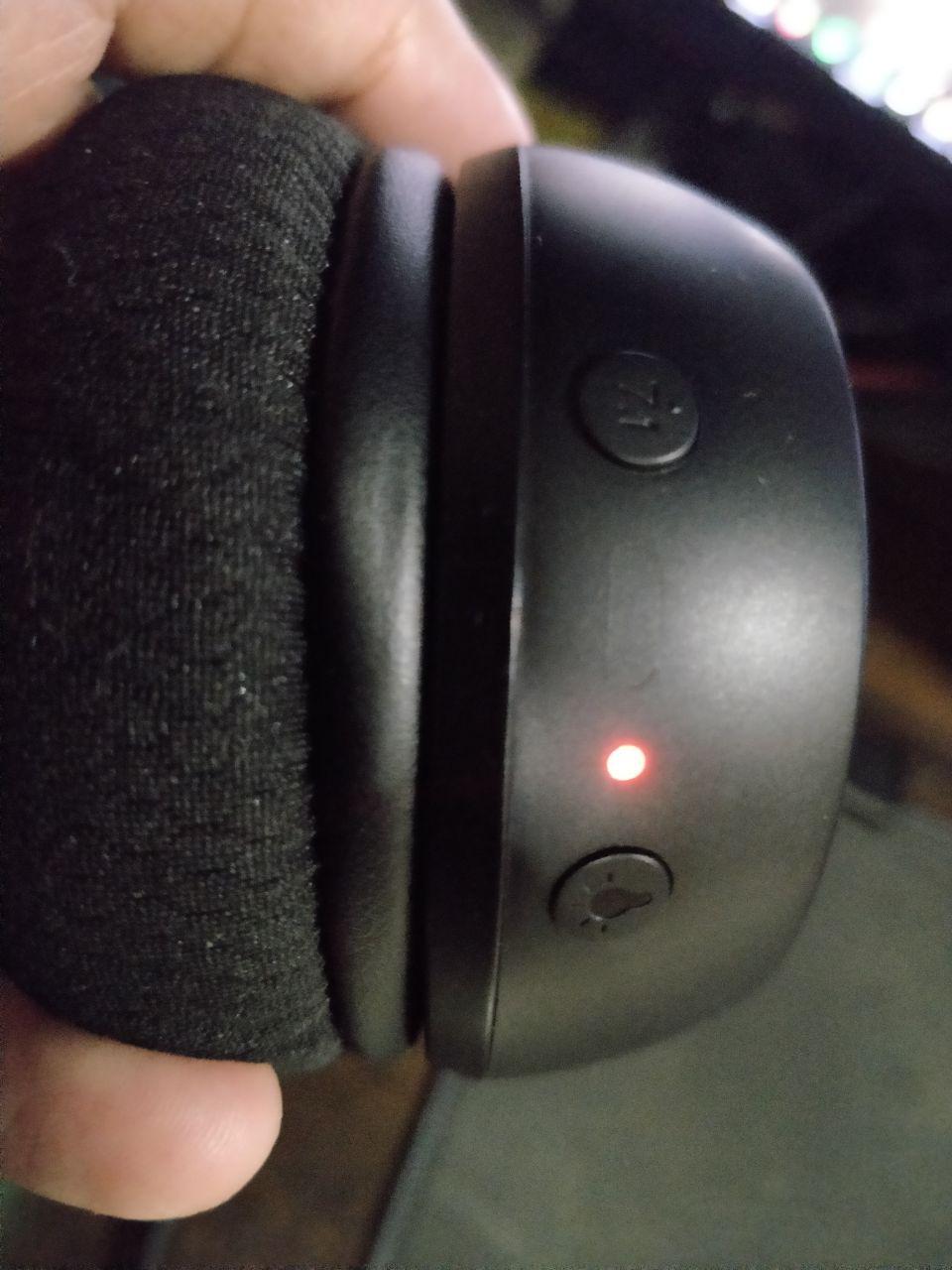 The mic that comes with the MH650 is detachable and is possibly the best sounding mic I have ever come across in my life. It sounds as good as the Sennheiser GSP series headphone mic so you can understand how good it must good. My audio communication in discord with my friends was possibly the best experience I have had in my gaming sessions.

According to them, my voice had good depth and bass, it did not sound nasal and everyone was able to hear me very clearly. They even told me to lower my mic volume which never happened before which means it is decently loud and thats a good thing.

Now, lets come to the main topic, how good they sound you ask? The sound separation is on point, the soundstage is wider than the Hyperx Cloud 2 that I currently own and that tells a lot because the MH752 also is better than my cloud2 which means that you are getting a close enough sound experience of the MH752 in MH650 at a cheaper price.

The sound was not muddy even when I changed the equalizer from the software. On taking both the treble and bass up the sliders, instead of getting a bad sound experience, The sub-bass experience did not ruin the already balanced and clear sound that I was getting normally out of the box. It instead made them sound even better.

For me, a gaming headphone should always have the best audio positioning else I would not even check the headphones out further. This does a good job at that as well.  I know at this point I am only pointing out positive things and nothing negative cause believe me when I tell you that you need to experience these personally and I can say for a fact, that you won’t be able to find any problem as well in the MH650.

The audio positioning was on point and I was able to know the enemy’s current position when they were trying to push me in CS: GO or in PUBG. While playing dota2, I was able to listen to my enemy players farming on our jungle side when they were manually or auto-attacking the neutrals as well which in ranked games is very important and gives a pro player a huge advantage over their enemies.

The Bass, on the other hand, was not overwhelming and it was exactly how much you would want while playing games or listening to music or watching movies. The sliders in the software do help a lot so do not forget to download the software after you have bought these headphones. I will talk about the software in a bit as well.

MH650 VS MH752 VS Cloud 2: For those asking about these since I have been using them for quite a while now, I can safely say that the MH650 gives 80-85% of the performance of the MH752 while still managing to beat the Hyperx Cloud 2s by not only sounding better and having a better mic but also being cheaper as well along with RGB and 7.1 functionality

7.1 Surround – I personally am not a fan of 7.1 in headphones since they are artificial which is meant to give you a surround sound experience but for me, it just ruins the same. I would rather prefer having it switched off and enjoying them as it is. The 7.1 experience can be customized via the software by moving the sliders around and manually checking which combination suits you the best.

You can also have a surround sound rotation in whichever direction you want and check which suits you the best. Or turn it completely off as I did and enjoy the experience that I am having with slightly elevated treble and bass. 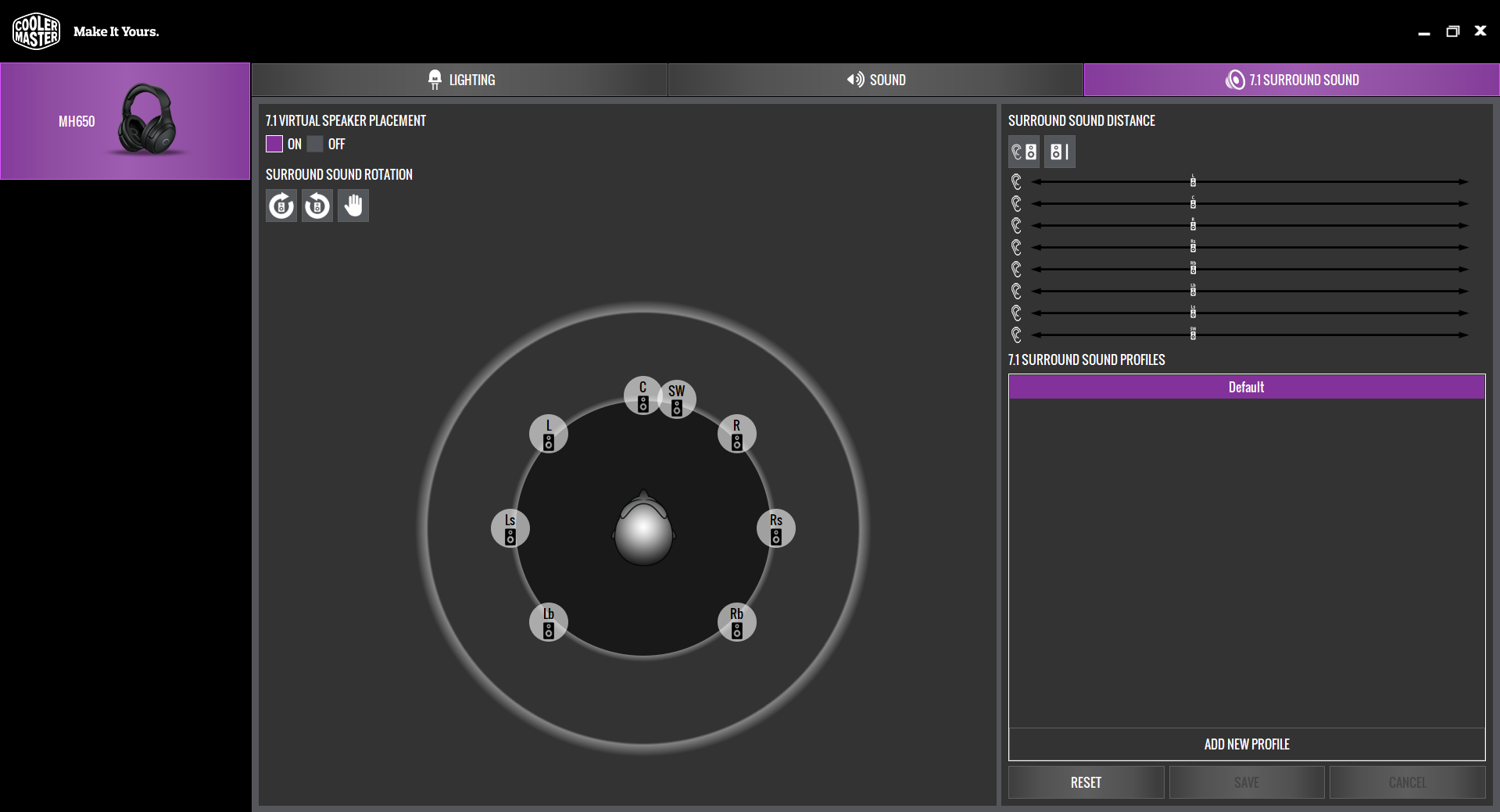 RGB: As for how sound is relative to different people, RGB is the same. Some like it and some do not. I personally love RGB when it is done right and Cooler Master did justice to them as well. The RGB can be controlled manually by clicking on the right-side LED button to change themes or can be changed via the Master Plus software which I will talk about in detail below.

PS4 PRO: The MH650 works directly in the PS4/PS4 Pro via the USB port. Its a direct plug and play and nothing else is required. The sound output gets activated automatically to the headphones. Speaking of sound, the bass is the same as it is on the PC out of the box but the treble is a bit less on the PS4 for some reason even on the highest volume. This is the only downside of these headphones which I think is something that cooler master should look into. Rest the experience has been the same in the PS4 as on the PC.

After plugging in the headphones, it is highly recommended to download and use the Master Plus software. Without this, your experience will be moot since the out of the box experience is not the ultimate experience and you will definitely want to get the most out of your brand new MH650 headphone.

When you open the app, you will see the SOUND tab and this is where you can adjust the treble, bass, mic volume, overall sound output, and equalizer – all according to your own liking. The best part here is increasing the sliders on bass and treble will not hamper your current out of the box experience but will amplify it even further without sounding muddy.

You have three different sound profiles already included in the software, you can use those if you want or create your own sound profile. 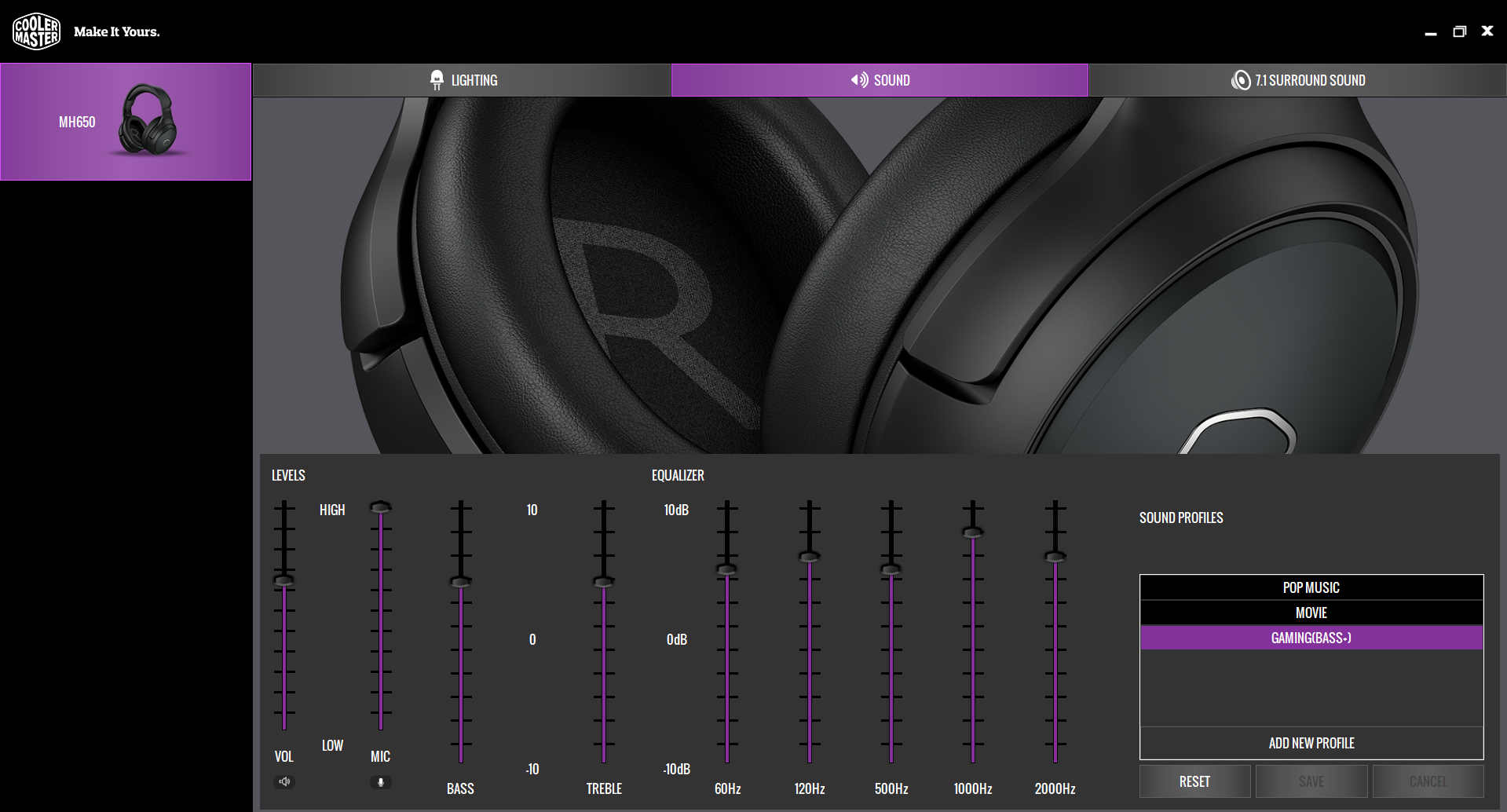 Next up on the left, we have the Lighting tab and this is where RGB can be controlled manually and you can select any static light of your choice or keep changing the theme or toggle colors or simply keep it turned off depending on your mood.

The brightness of the RGB lights can be controlled as well here. 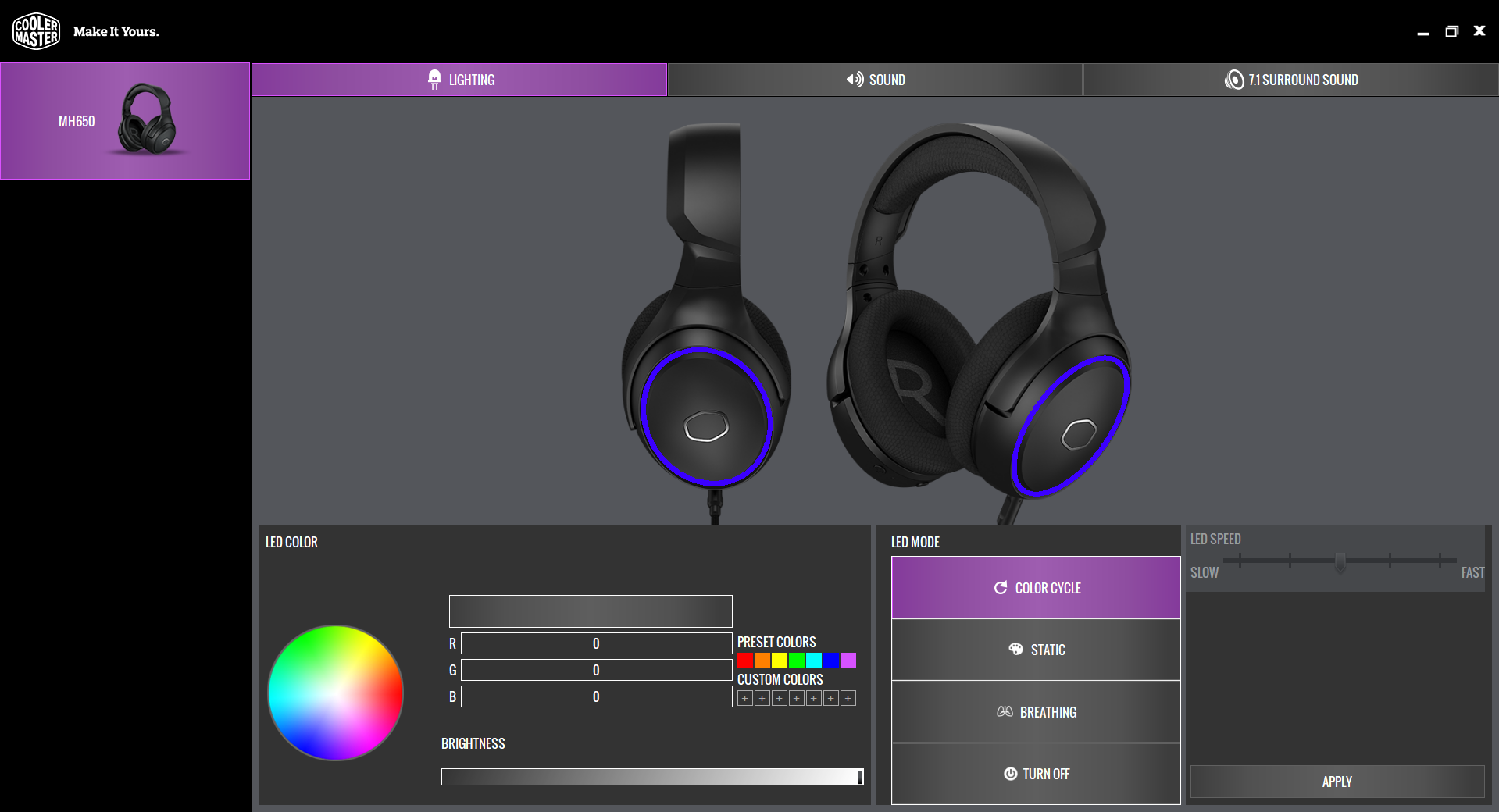 Cooler Master’s MH650 delivers a top-notch performance that is suited not just for gamers but also for listening to music or watching movies. It even works flawlessly on the console as a direct plug and play device via the USB cable. With a price tag of around 5000 INR, these are the best sounding and the most comfortable headphones that you can buy right now. It easily beats all its competitors in its price point while delivering the best mic quality that I have ever heard in any headphone yet. I really hope that Cooler Master keeps making such amazing products in the future as well and may the rest follow them as an example.