Scott Pilgrim vs. The World: The Game – Complete Edition Review – Hello, Again! Friend of A Friend

Among most transmedia, Scott Pilgrim vs. The World holds a fascinating spot in pop-culture. Edgar Wright’s 2010 adaptation of Bryan Lee O’Malley’s comic book series didn’t exactly set the box-office on fire but became quite the cult classic. Ubisoft’s hilariously titled Scott Pilgrim vs. the World: The Game, a licensed project meant to compliment the movie, fell through the cracks as licensing issues saw it removed from all online stores. Over time, this side-scrolling beat-em-up game saw a passionate fanbase growing, and the voice asking Ubisoft to bring it back on digital stores gradually grew louder. Things got exciting when O’Malley tweeted on August 2020 that Ubisoft had reached out to him. Ubisoft would then officially announce an official remaster of Scott Pilgrim. On January 14, 2021, Scott Pilgrim vs. The World: The Game – Complete Edition released on all platforms, including all the DLCs and Add-On packs over the base remaster. The question then is – Does the game stand on its own merit? 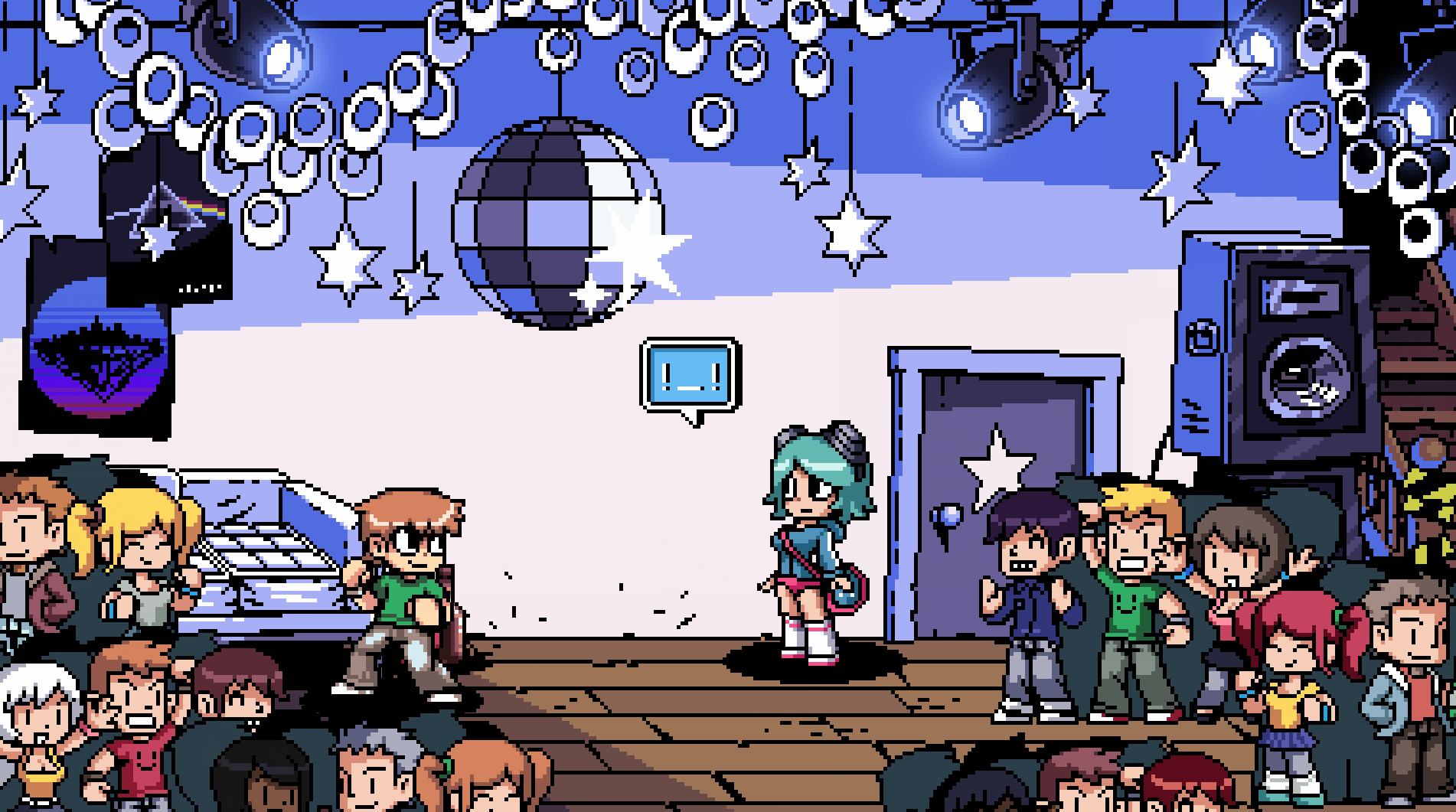 Unlike most licensed games, Scott Pilgrim benefits from its off-beat source material that was begging to be adapted into a brawler videogame, more so than it did a movie. It draws heavily from the retro beat-em-ups like Streets of Rage and River City Ransom; you move through various locations in Toronto, beating up anyone who crosses your paths. Enemies drop coins that you can use to purchase items at shops that increase your stats and abilities. As you level up, you unlock different moves that you can chain to perform satisfying combos. I really like this because it helps newcomers ease into the system before introducing complexities. Having new combat moves constantly unlocking also gives a great sense of progression. Soon you’ll find yourself air juggling enemies and clearing the room before they even touch the ground. The combat is basic but highly enjoyable and has not aged a day. The boss battles are entertaining as each boss has a trick up its sleeve. There are 7 levels, and they can get quite challenging, especially on later levels, which are brutal if you’re underequipped. 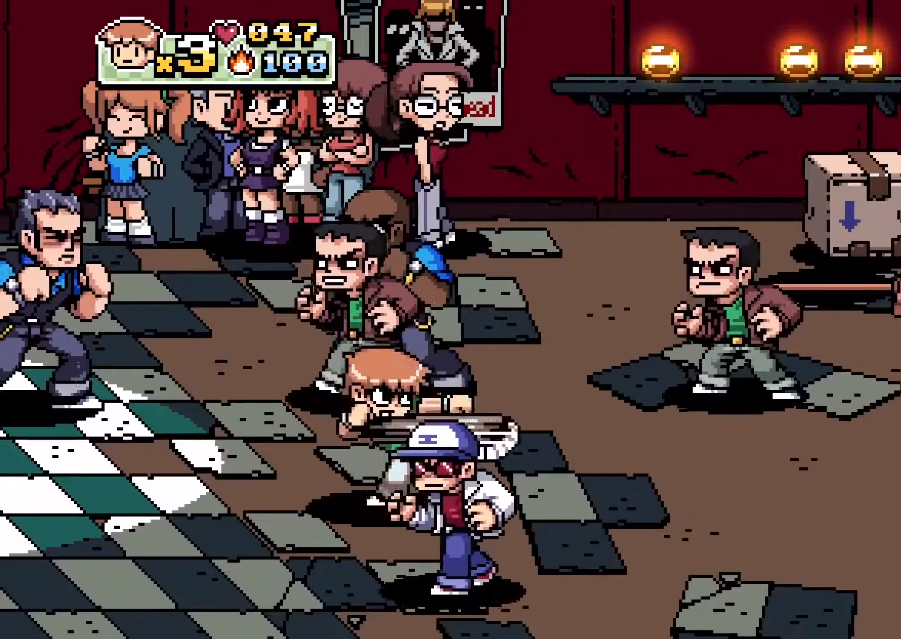 Scott Pilgrim’s biggest strength is in its presentation. This is a visual and auditory euphoria, and I’d like to go into detail on each of these. Firstly, the visuals – The highly stylized art design pays homage to the comics and other games like Double Dragon. The animation is crisp and meticulously detailed. Every move feels distinct, and each character has multiple facial expressions while executing these. So, while the game may not be mechanically dense, it more than makes up for it with just how much character there is in each punch. Fans of the comic would feel like they’re playing their favorite chapters in motion. The background feels completely alive with colorful art and characters. 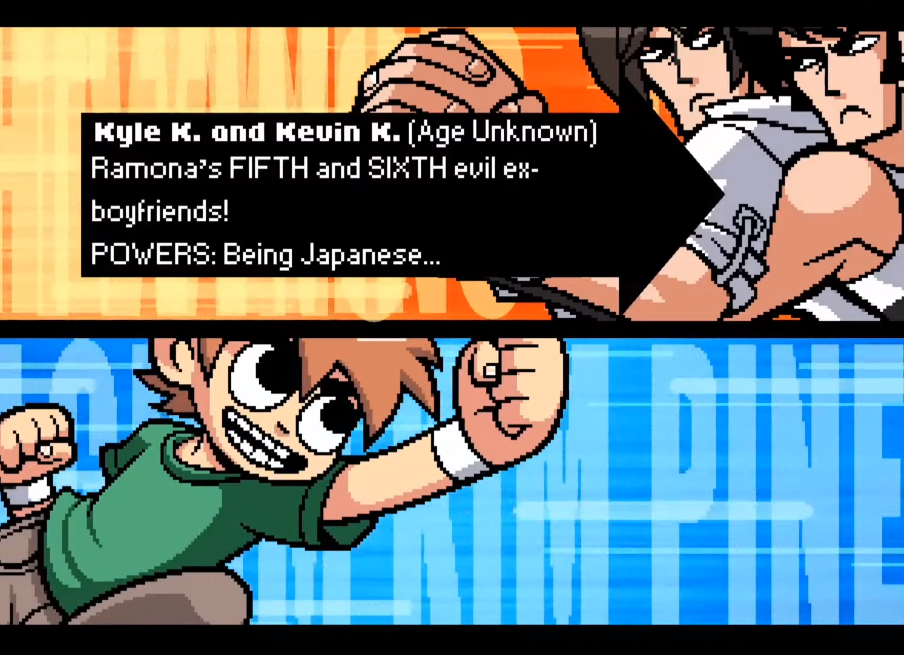 Even more impressive is Scott Pilgrim‘s music. The game’s main screen introduces you to Scott Pilgrim Anthem, a loud statement for the musical perfection that is to follow. Pop-rock band Anamanaguchi has crafted a rock-meets-chiptune soundtrack that feels both a loving homage to the classic brawlers and utterly unique at the same time. Any Indian craving for a chiptune-infused take on their local music will be immensely satiated by “Bollywood,” again apt. “Skate or Live” gets your heart pounding like you’re doing a thingy on that rail, and there’s just no way to pump the brakes while tracks like “Maki Ya” and “Rock Club” would fit right at home in Streets of Rage. You won’t realize how much these tracks affect your emotional investment until “The Dark One” rolls along with some subversion to give you a real kick to the gut. TLDR – There’s just nothing quite like Scott Pilgrim vs. The World: The Game’s soundtrack.

While Scott Pilgrim may be on the shorter end when it comes to length, but there’s additional juice here to squeeze out if you’re looking for it. There are multiple characters to unlock, who each come with their own set of skills. Each character comes with its own ending, and finding the true ending will require multiple playthroughs. Additionally, the game sports an excellent 4-player online co-op, which’s such a cathartic experience in the current lockdown. Whether you’re looking to play Survivor, Battle Royal, or Dodgeball, there’s enough in here to keep coming back to. 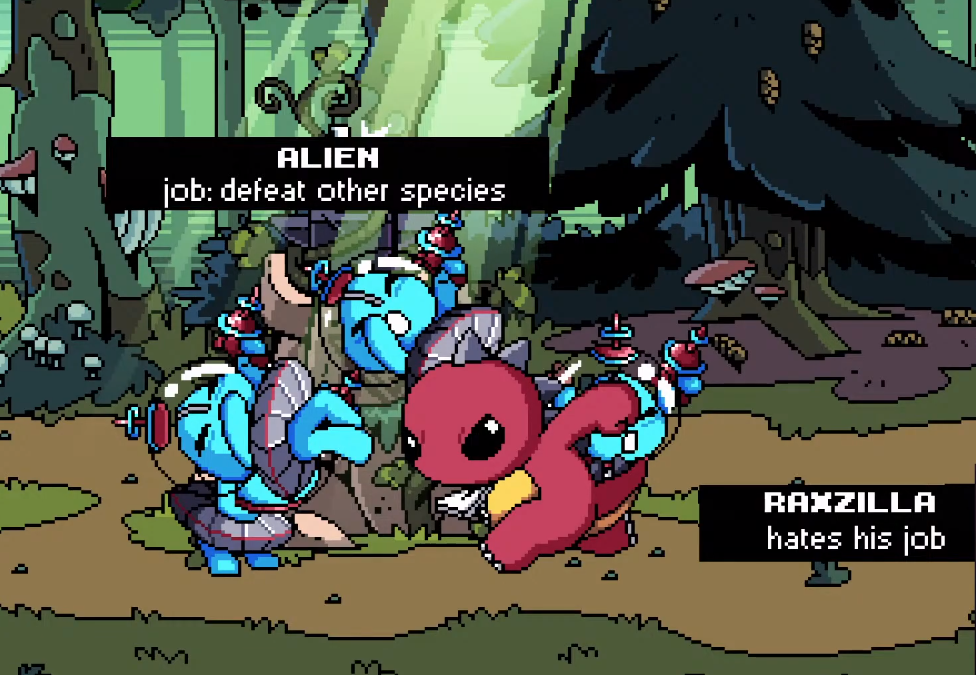 Sadly, all is not a home-run. My biggest disappointment comes with the game’s narrative. The story of Scott Pilgrim vs. The World draws heavily from the arcade setup. You, like Scott Pilgrim, must beat Ramona’s seven evil exes to date her. You can see how a videogame is a perfect platform for exploring this narrative. Sadly, the game drops the ball by not trying at all. You start a level, battle with an ex, move on to the next, with little more than a slideshow of an image to provide any context. Scrolling through items in the shop feels a little tedious and outdated. I also don’t understand why the first shop sells the costliest and most useful thing. Was the design idea to have player backtrack and fetch upgrades? If it was, it really didn’t help my experience.

P.S– Massive Shoutout to Ubisoft for sending us this game code for Review.

Scott Pilgrim vs. The World: The Game - Complete Edition Review

With all that said, Scott Pilgrim vs. The World: The Game – Complete Edition is still an absolute blast to play and a great way to start 2021. The beat-em-up genre is seeing a resurgence with the likes of Streets of Rage 4 and River City Girls, and it’s only fitting that this cult classic is back to join the party.