You start off with a mini-tutorial on the controls, and before you know it, you are thrown into the main game. As you progress further, you will realize that the game is different from the other souls-like games in terms of playstyle, exploration, and combat.

There is absolutely, and I say again, absolutely zero grinds when it comes to items and character progression (because there is none). There is no character progression in Mortal Shell; you do get souls known as “Tar” here on enemy kills, which you can use to activate/purchase passive abilities of your current worn shell or buying/trading items with merchants. 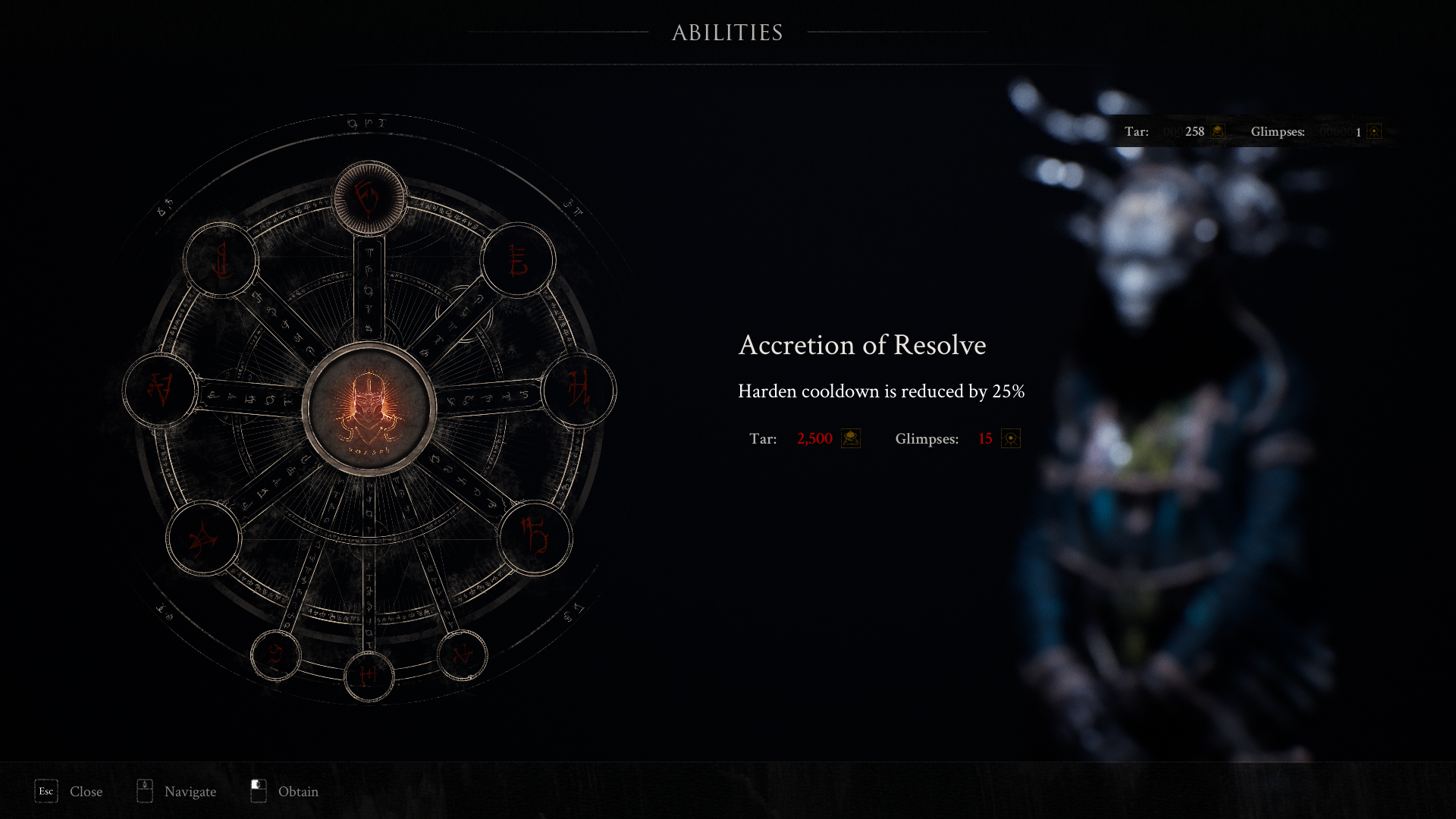 At first, the idea of a zero-level up system made me think that I may not like where this was heading, but I am glad to say that I was wrong. As I progressed further and discovered other areas and gameplay elements, I realized how all this made sense and why the developers did what they did.

Speaking of unique abilities, Mortal Shell has a few, including the parry system and Hardening. Parrying works a bit differently here, and only a few of the attacks can be appropriately parried. Hardening is an ability to harden your own character in place even while attacking to counter enemies or stun them for a brief moment, which gives you an opening to attack them. Hardening ability comes back after a few secs of cooldown and has unlimited usage.

Since there is no level up system in Mortal Shell, the game heavily depends on how you play with a specific shell. There is a total of 4 shells, each with their own strengths and weaknesses. You can change between shells midgame with the help of individual items or turn them back at your first base, which does not consume any item. 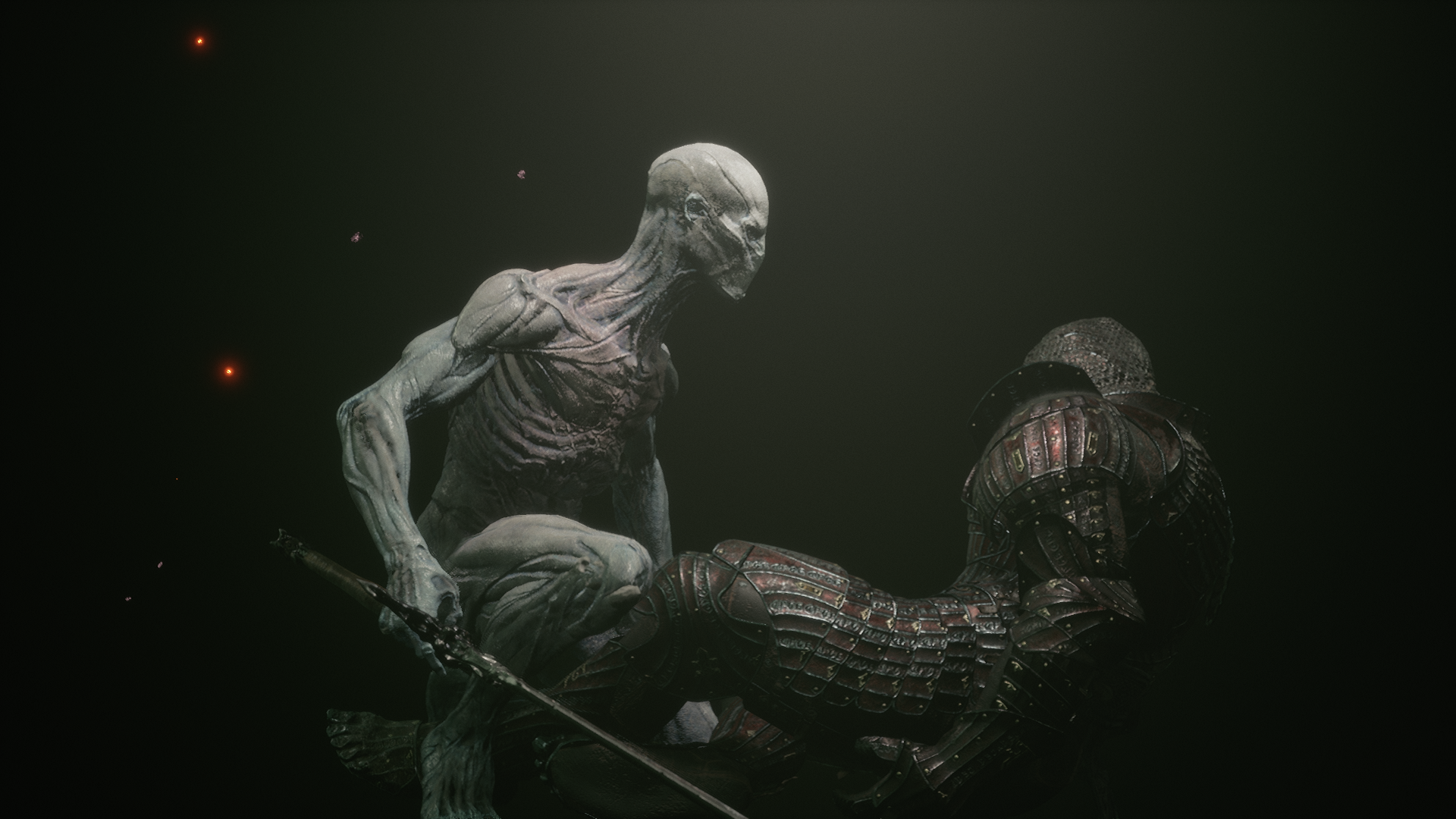 Different weapons combined with various shells have their own unique way of playstyle. Your gameplay will change depending on which weapon and shell you play with. Each weapon has its own upgrade cycle where you can increase the damage of the weapon and activate their own unique abilities by using resolve (which you gain by attacking enemies which power them up). 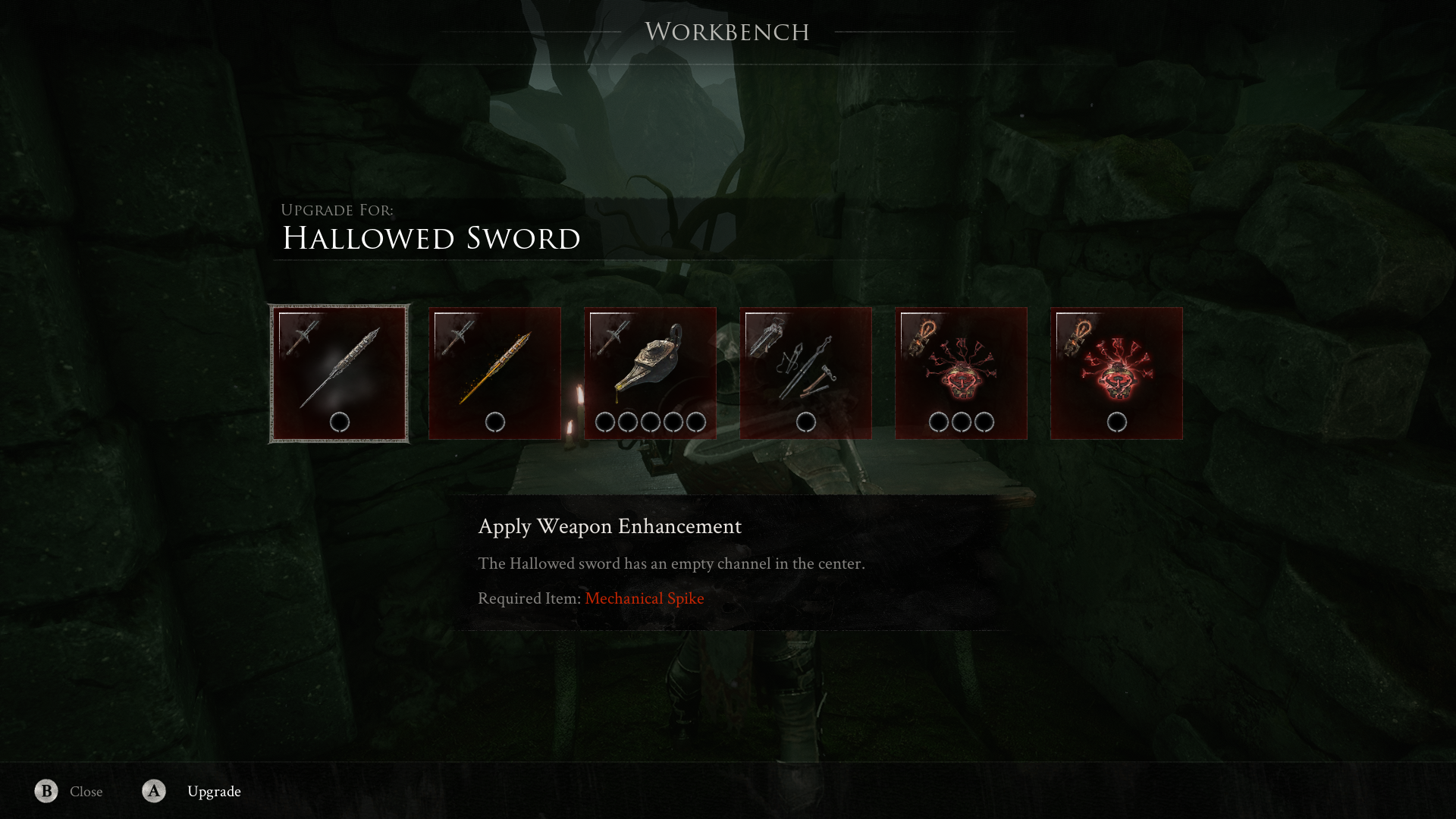 The level design in Mortal Shell is something I am thrilled with. Each and every boss area and mini encounter are different, with detailed textures and amazing lighting all over the map. The enemy variations are good, though they start to repeat after a few hours of your playthrough. There are different areas with particle effects in Mortal Shell, including fire, ice, and a large open tower with floating planes (Control vibes anyone?). 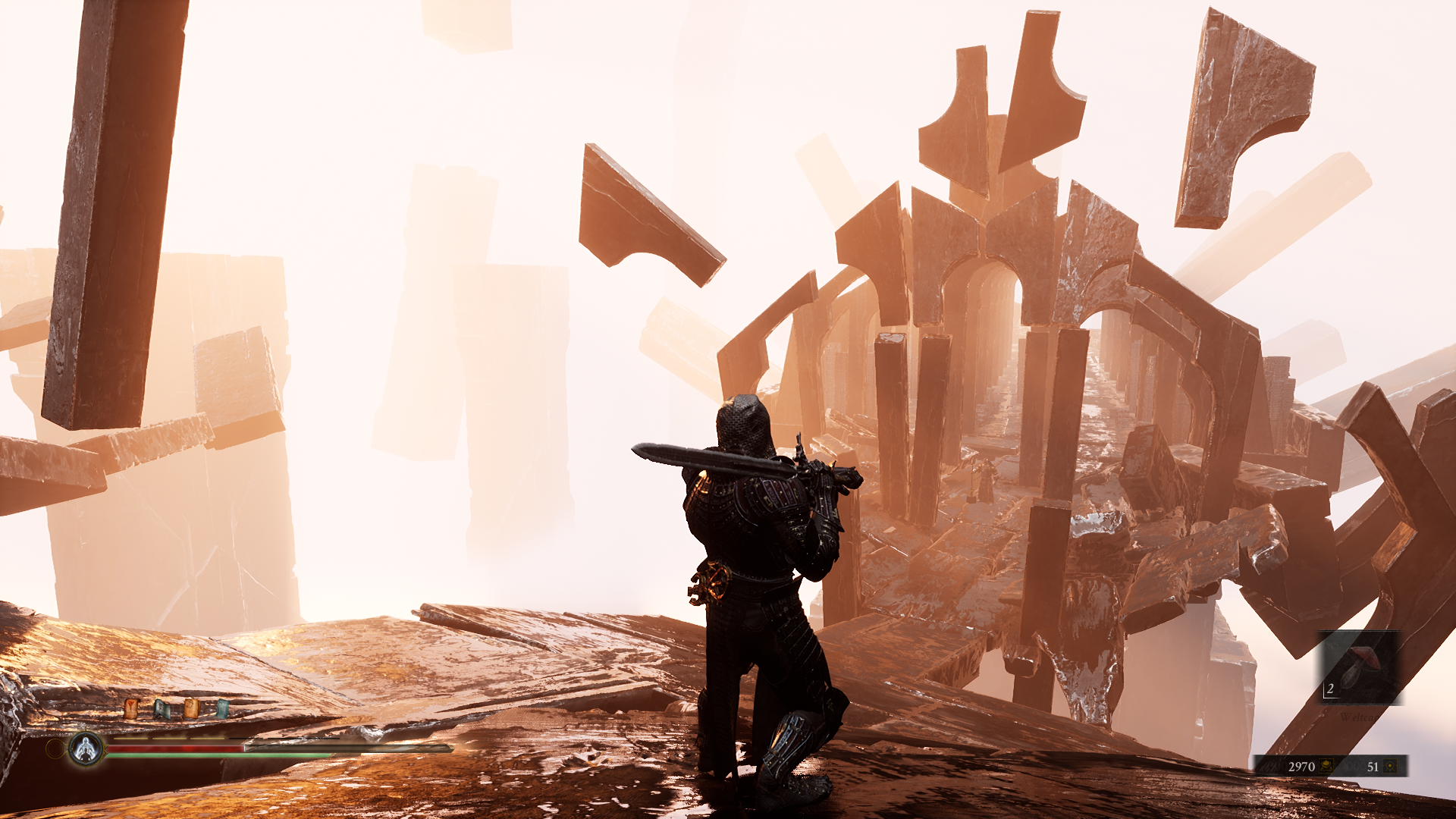 The attack animation, enemy hitboxes, is better than dark souls and properly registers every time damage is being dealt with the enemies. The combat feels satisfying with a few weapons but, at the same time, feels heavy and slow with the strongest weapons, even more than other games that force players like me to not use them and go with the default sword instead. 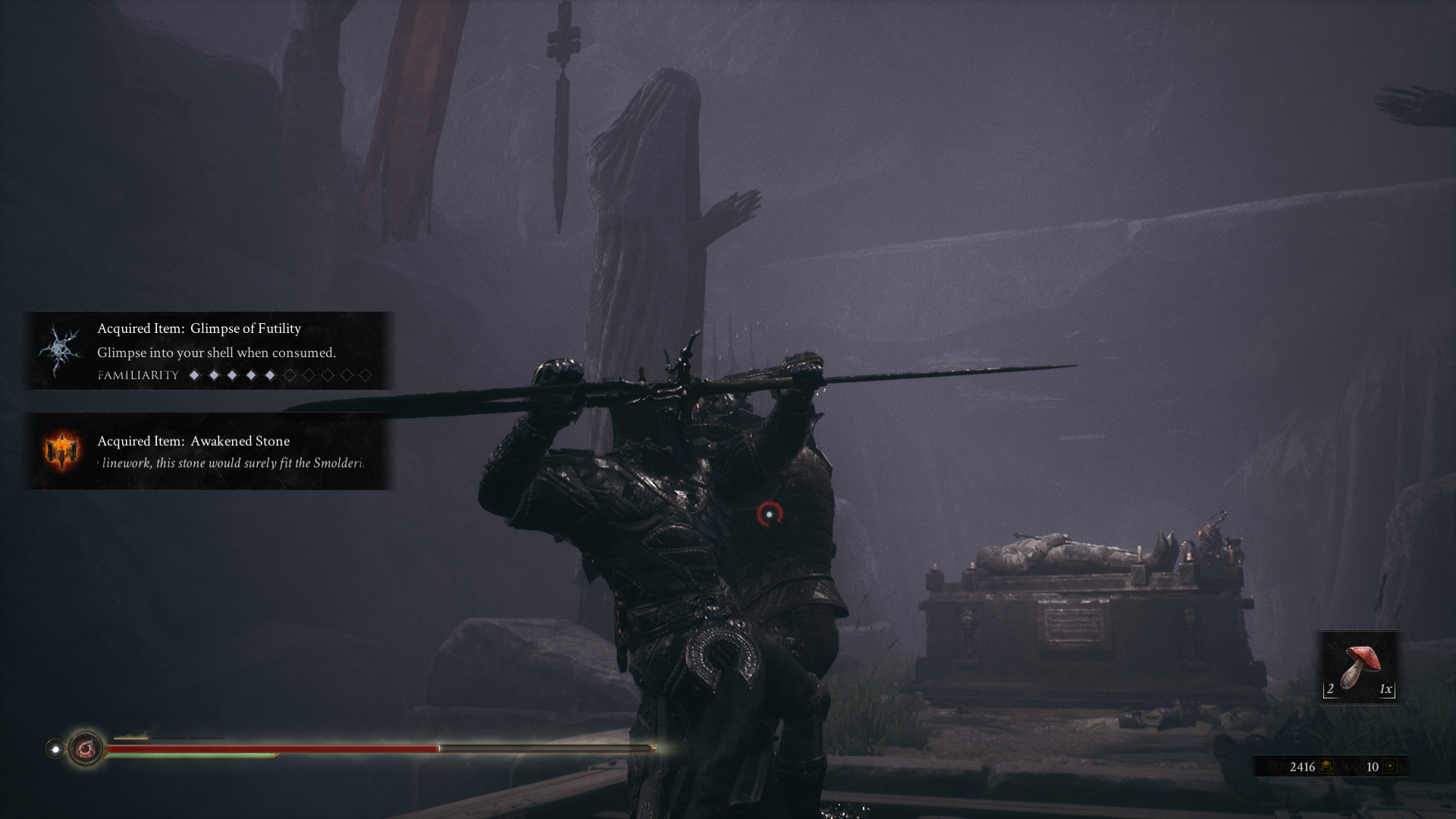 Our character is immune to attacks while the game is on the pause screen. Make sure you are not near any cliff when you are pausing the game as constant attacks from enemies might push you down the cliff but nevertheless you will not take any damage from their attacks.

Using the same items for more than 3-4 times reveals the true nature and also provides bonus attributes as you become more familiar with each usage. Each and every consumable has a familiarity attribute and can be maxed out by using them for ten times. 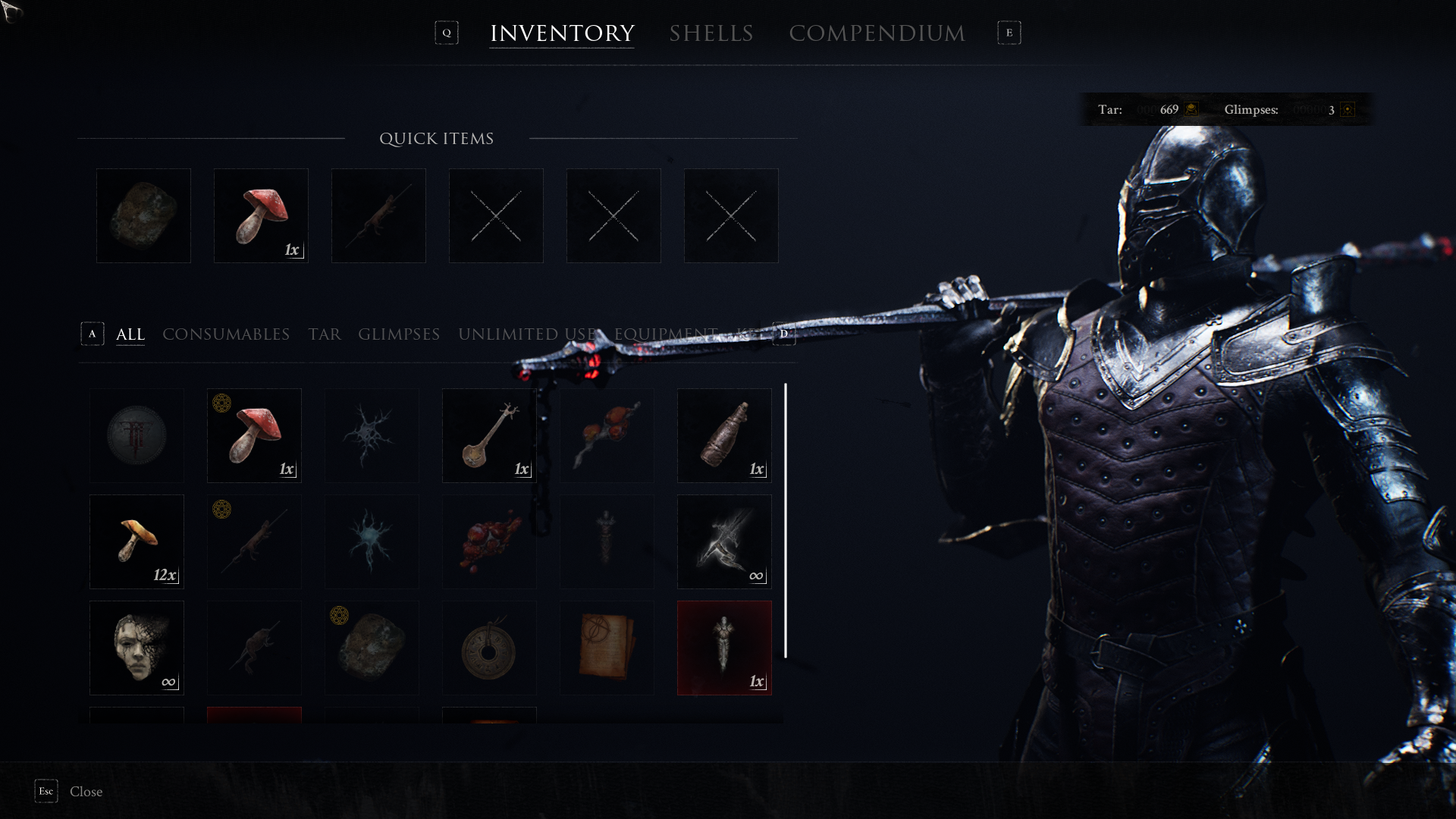 After every boss encounter, the entire area is consumed with darkness and fog and new enemies appear with their own unique abilities. This is when you would have to backtrack your way back to the base and deliver a certain item, the arrival of which would remove this fog and darkness and normalize the level. All the locked chests scattered throughout the game become unlocked during this fog so make sure to loot them before delivering the said item back to base. 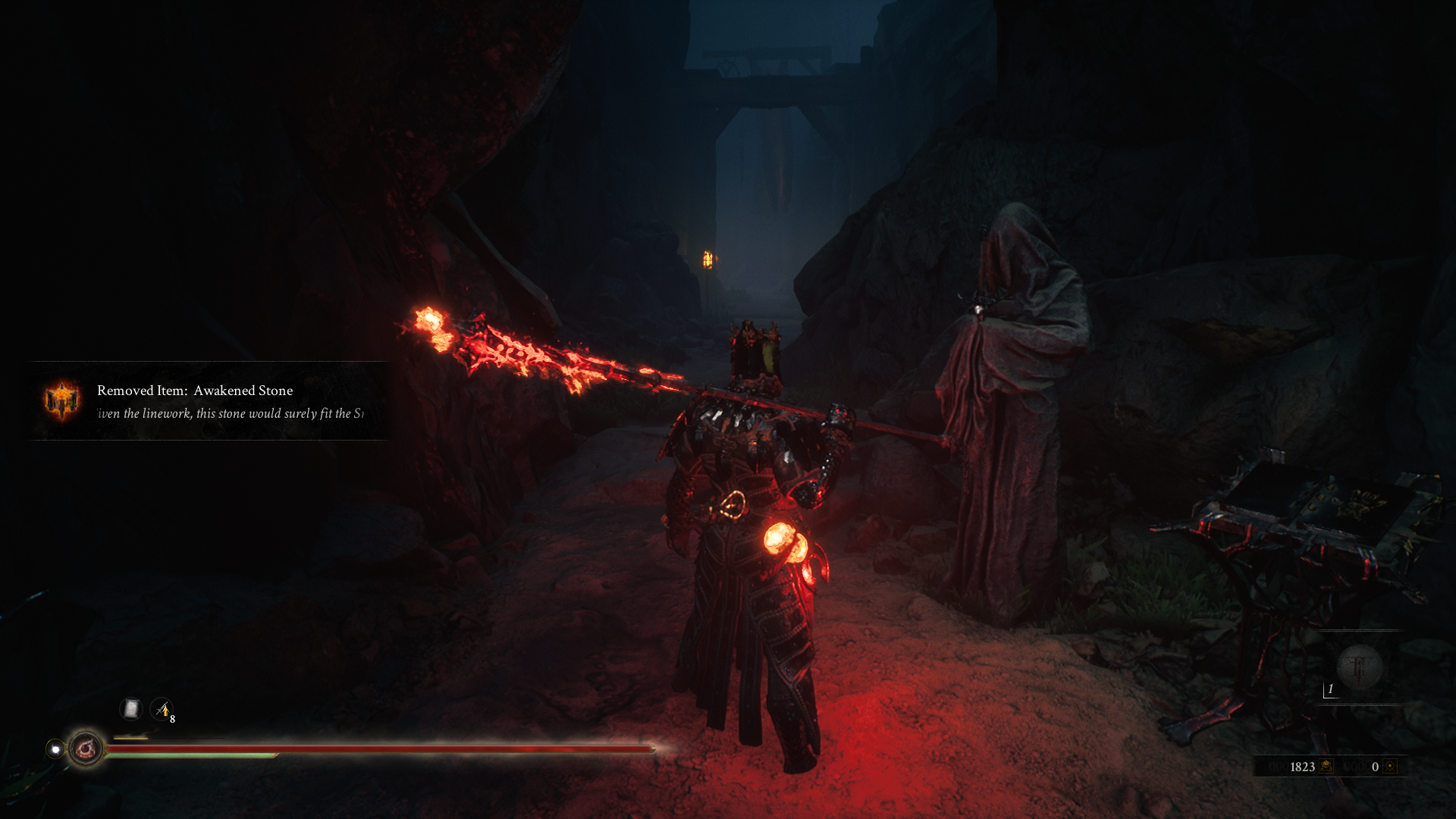 Mortal Shell looks and runs excellent. My PC is equipped with a GTX 1070 Amp Extreme with an i5 6600k at stock and 16 gigs of ram, running the game at around 60-90 fps outside and around 100+ fps inside max settings. The details on the textures, enemies, and the entire layout of the areas is well done. 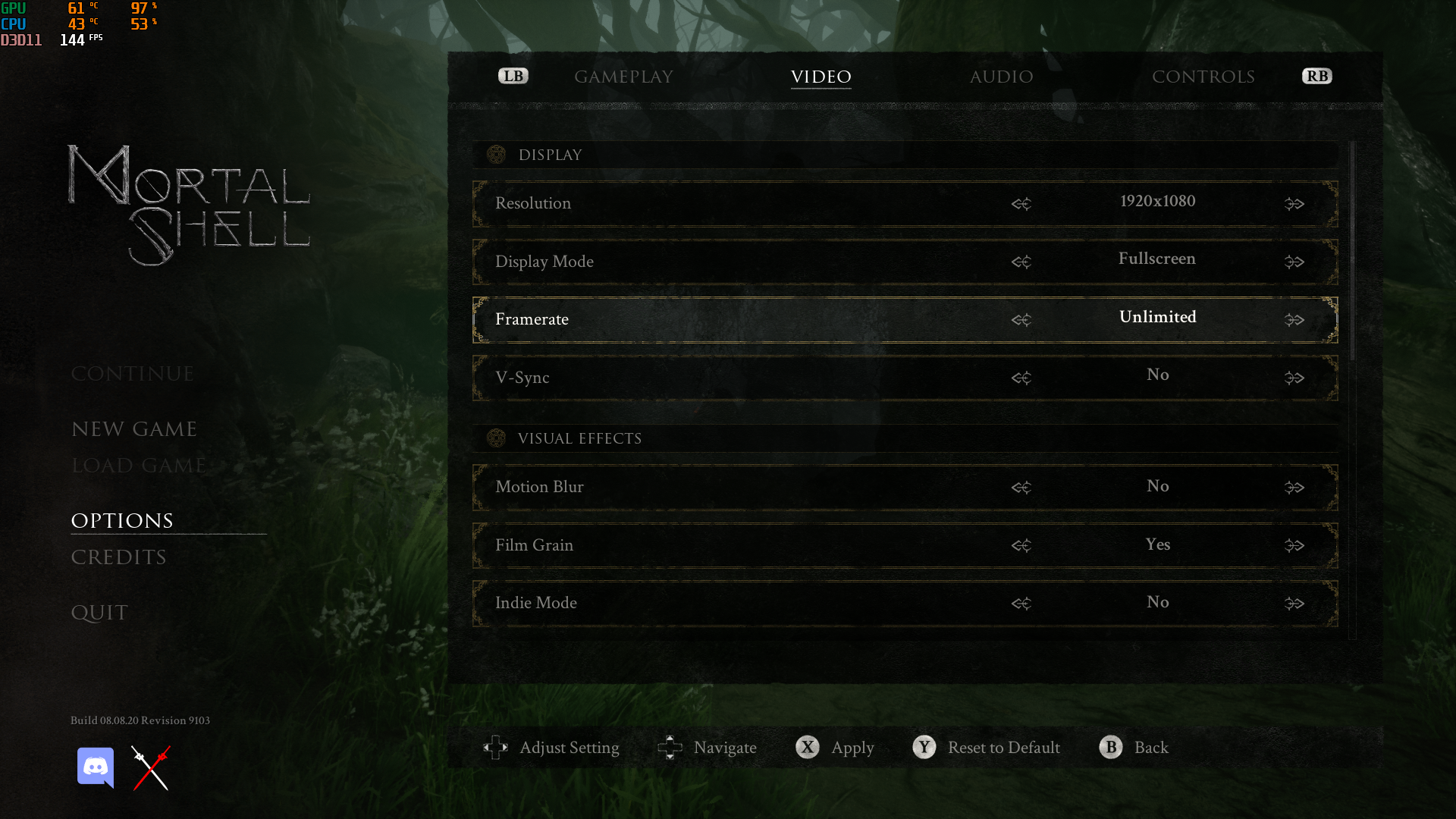 Being an indie game, Cold Symmetry has done a fantastic job and made it look almost like a AAA game with proper assets, textures, and lighting. There is also native support for DualShock 4, which we do not see in most games, and its good to see this feature present here.

As for the soundtrack and various sounds in-game, it is exactly the same as you would expect from dark souls. Even the NPCs sound familiar during cutscenes. Boss battles and enemy encounters are the only times where sounds were different and had the beat pumping theme going on as it should be during fights.

Our character can play the guitar as well, getting maxed out familiarity with it will irritate enemies nearby and a bit far away and will force them to attack you which could aid you in combat. 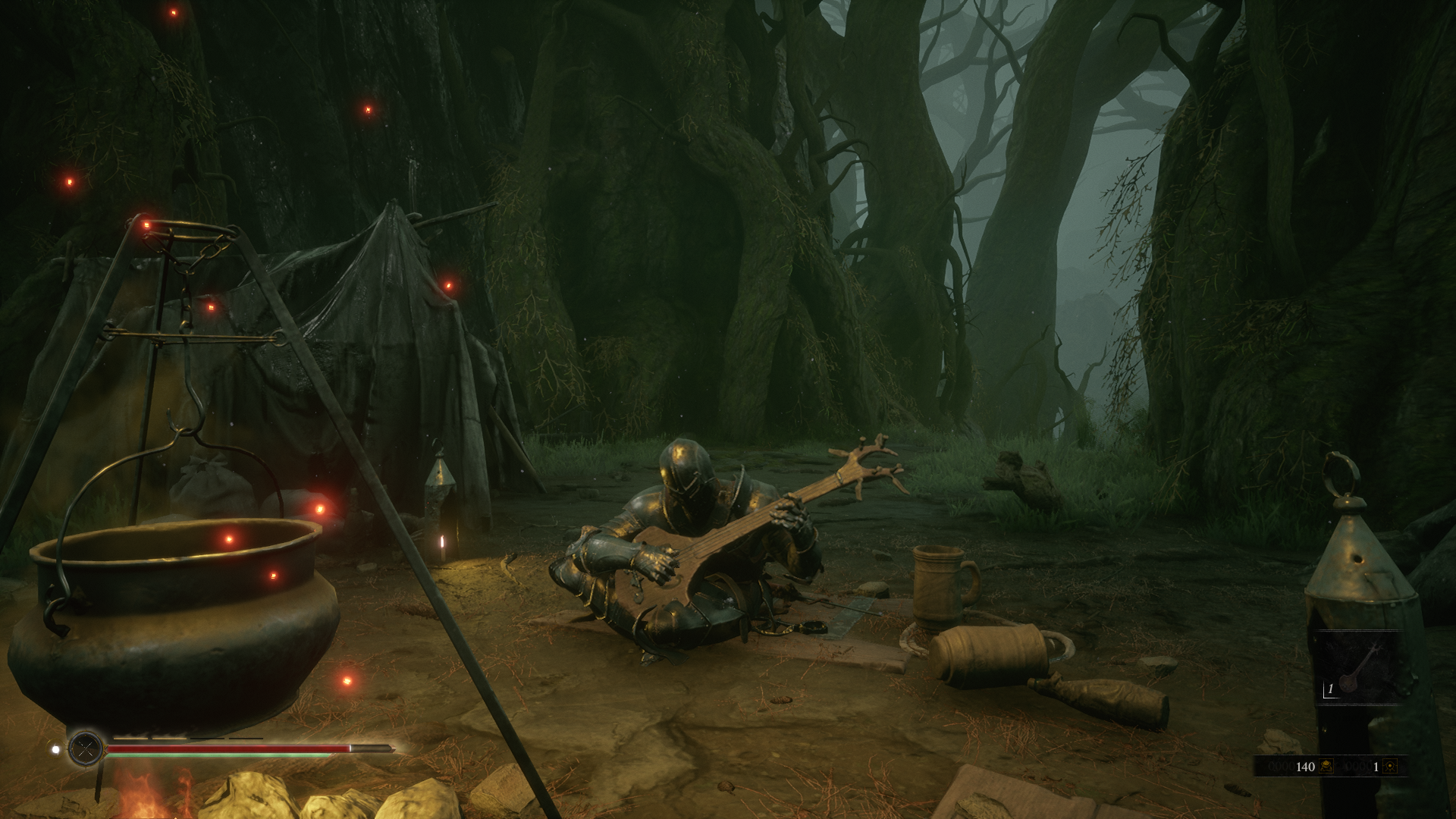 Mortal Shell is not Perfect

Okay, enough with the positive points. Let’s talk about the things that I personally did not like. Firstly, the fixed camera angle drove me mad. It gets irritating when you are doing a one on one fight with a mini-boss or a boss. When you try to roll dodge, and the enemy’s top half of the body isn’t correctly aligned on the center of the screen, thus making the encounters clunky.

Another major issue in Mortal Shell is the lack of fast travel. Backtracking in this game is very painful, and the inclusion of fast travel would have made this a delightful experience.

Lastly, in-spite of having such a big open area all around, 70-80% of it has nothing in them, especially in the Tower/castle area. It is empty, and a few portions of those areas include some hidden items, but that’s about it. And then there are the same 3-4 enemies present scattered across the entire area. 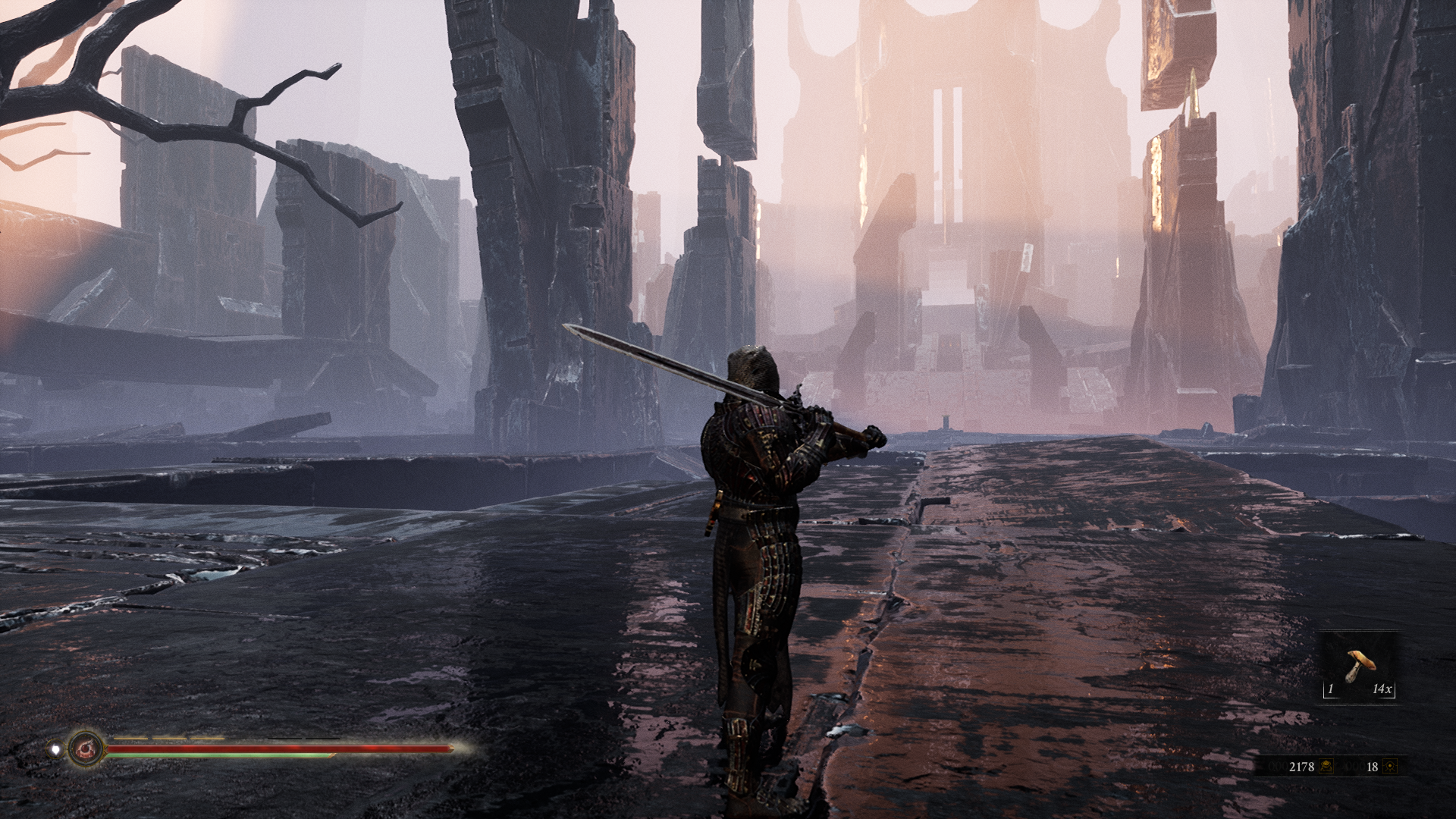 Mortal Shell has been a very unique experience for me. The changes made in this souls-like experience with the new abilities and the lack of grinding make it worthwhile to play. In spite of the absence of fast travel and the fixed camera being annoying in few areas, we highly recommend Mortal Shell to everyone due to its risk-taking and unique playstyle that will inspire new developers and games to come.