Judgment is an action-adventure video game developed by Ryu ga Gotoku Studio and published by Sega for the PlayStation 4. It is a spin- off of the famous yakuza franchise and is a standalone game, having almost all the characteristics and features of the Yakuza series.

Judgment starts off with the character Takayuki Yagami, who was a lawyer before but due to his last case going haywire, where his client Shinpei Okubo (who has allegedly murdered his girlfriend after being set free) has now turned into a detective and has lost his reputation and confidence in continuing his lawyer profession and now does detective work for a living.

One year later, Yuki Yagami is asked whether why he shouldn’t become a lawyer again to which he replies with that he has set a murderer free and has lost sense of distinguishing the bad from the right. From here on out, things start to change slowly as we see Yagami’s past coming to haunt him while at the same time shows us different kinds of events as they unfold and you get to know more people and do different cases and help develop character traits on the way of people around you.

Everything happens in the beautifully crafted city of Kamurocho, which does look superb during both the day as well as night. 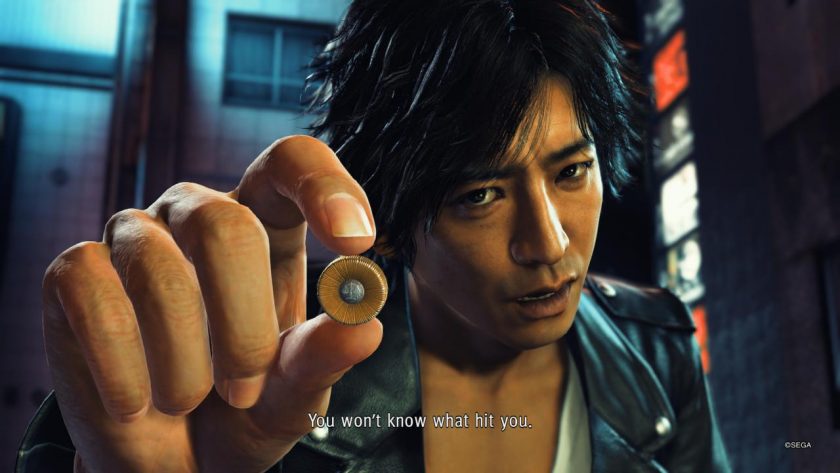 Providing any more info than this, would be considered a spoiler so that’s all there is for the plot. Rest assured, you are in for a ride as you keep playing this game, even being a standalone spin-off, it has its moments and you will get a good grip of balance between action, emotions, violence and lies along the way. Even though you will not find any major characters returning from the Yakuza franchise, this game holds on its own on being a standalone game and a decent spin-off.

The early hours of the game however, is a massive grind of small side quests and favours that you will have to do for the shop owners to get to future main quests/missions as Yuki tries to map together evidences leading to such quests which breaks the flow of the game to an extent. If you loved Yakuza for the grind and the slow story-telling, then you will absolutely going to love this as well.

Before diving deep into the visuals, gameplay mechanics and the audio of the game, lets talk about Yuki Yagami himself. The guy has a persona of his own and is very intelligent and determined. As you play along, you will realize him getting his confidence back after what happened before and how all the cases keeps bringing back his past from some people around him who has no good intentions for him , but he keeps going inspite of that. 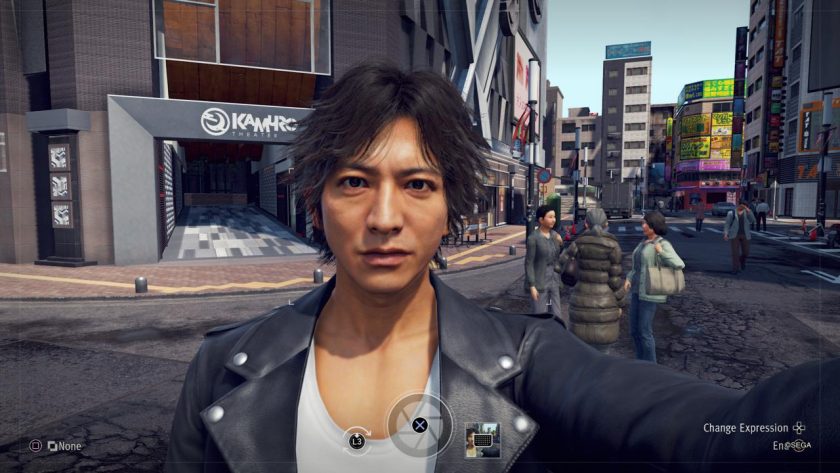 He always has a friend with him, his ex-yakuza friend turned partner, Masaharu Kaito even being egoistic still cares about Yagami and his work. The characters in this game are really interesting and well thought out.

You will start to have a love-hate relationship as you keep doing different cases as no one in the game have had a consistent mindset making the characters interesting at best. The character development however of few characters as you keep playing will come into effect later on which gives a fresh look into the story.

Even though  this is a spin-off of yakuza franchise , the entire skill set, the fight sequences , the combos and everything else would feel like just another yakuza game to you. The devs did a great job in bringing in new ideas to the table when it came to bringing in new combos as you level up your skills using you hard earned SP from fighting thugs in the streets and doing quests and other side quests. 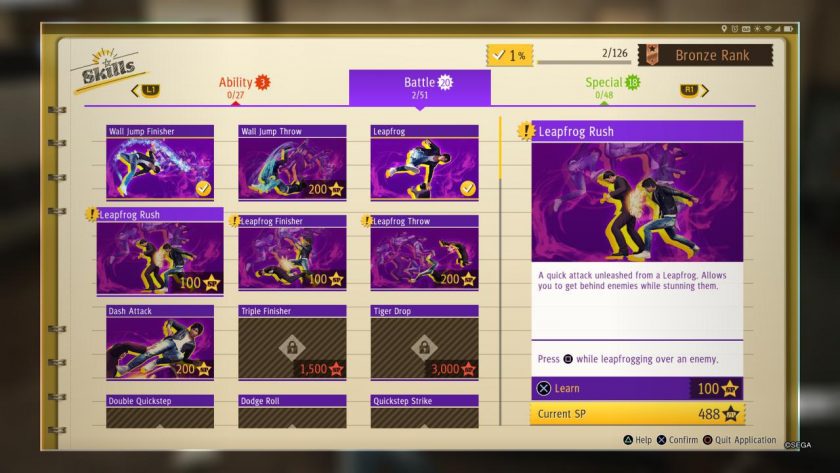 In judgment, the player is free to do only the main quests, if they want, or do both main as well as side quests or play mini-games like pinball, Dice VR, drone racing and so on. There are even some arcade games into some shops that you are going to see labelled as SEGA on each of them with different games which is very cool to see to be honest as they bring back some nostalgic factor to the game. 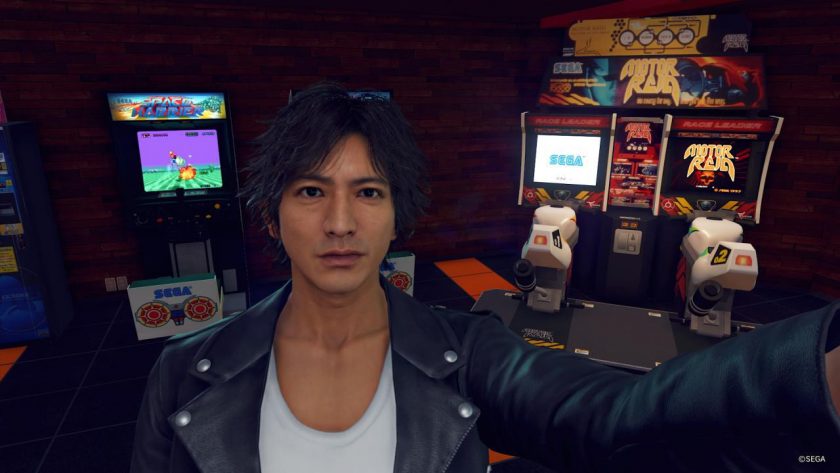 The combat system here has two styles which you can combine in fights and beat the thugs up nicely. One helps in crowd control and one helps you to do a proper 1v1 fight when you are all alone with the last man standing.

The game is locked to proper 30FPS and I was playing on the PS4 Pro, I did not encounter any fps drops or any kind of major bugs in the game and the game was very stable and the 30 fps lock was optimized.

The combat is fast, smooth and as time goes on and you keep unlocking newer combos, you will be able to chain some pretty sweet combos, few of which will do more damage than the other. The partner split combat combos are another fine example here, as I wont be saying much since this also will be kind of a mini-spoiler for anyone who has not played it yet but you have to experience it yourself to understand it. 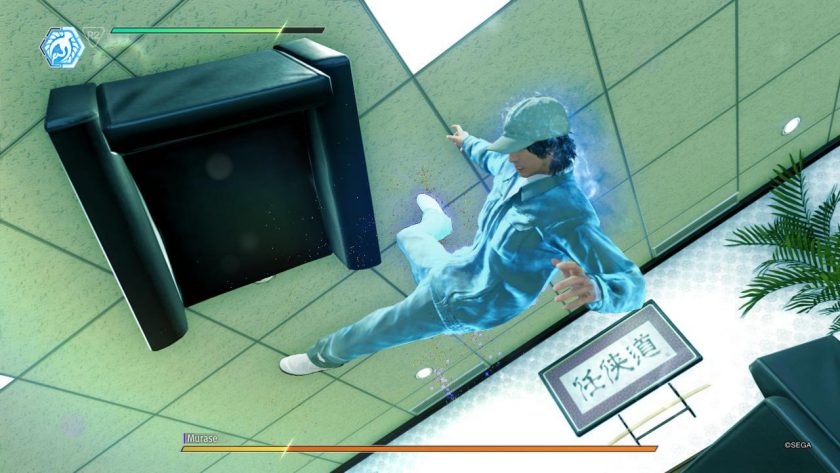 As you keep chaining your combos together, you unlock the Ex-heat talent, which when you press it , you go on full rage mode and you receive close to no damage from the enemies and you are able to beat down some of the toughest enemies you would encounter.

You will also find lots of damage, heath and Ex gauge increasing potions along the way which you can buy or craft  and use them during fights which will help you keep your combos going till the other person is on dead to rights.

As to weapons, Yuki is a law abiding citizen and is a self made man as I have stated earlier so you will not find him using any kind of guns or such weapons. The only weapons you use is your surrounding ones like a small chair, table, cycle or a bench and so on.

Throughout the entire game, you will find ample of side quests and favors from the shop owners. You can either do them if you want or ignore them and do your main quests. These side missions are all different and some are very irritating to do while others are very interesting and shocking at the same time which makes the game to be all over the place and might make some people not continue to do such side missions. 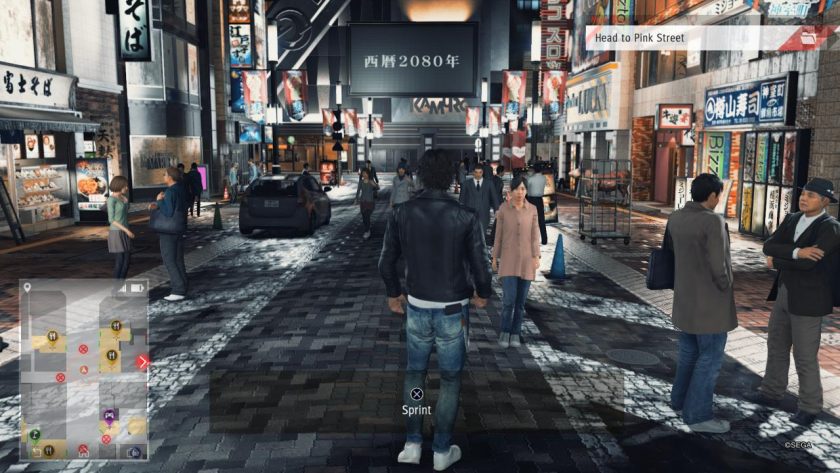 The only complain I had here were to do with the forced side missions/favors which you cannot ignore or not do cause it gets directly linked to the main quests. Adding an option to skip this would have been a welcome addition. The sides are funny, sometimes lame and not as dark as the main quests are, some even have multiple parts which gets carried on later down the game as well.

The dragon engine is just an amazing piece of tech I tell you, the game has an amazing mix of detailing and texturing throughout the entire game. The entire city of kamurocho comes to life during the night due to the amazing lighting from all the nearby shops and as well the as the ambient light which keeps the city lively at any point of time.

The streets are well detailed down to the last lane, the textures on the streets and all the shops are amazing, the night life gets lively due to the Neon style flashes all over the city from different bars and clubs from around while there is music playing on certain parts of the streets. 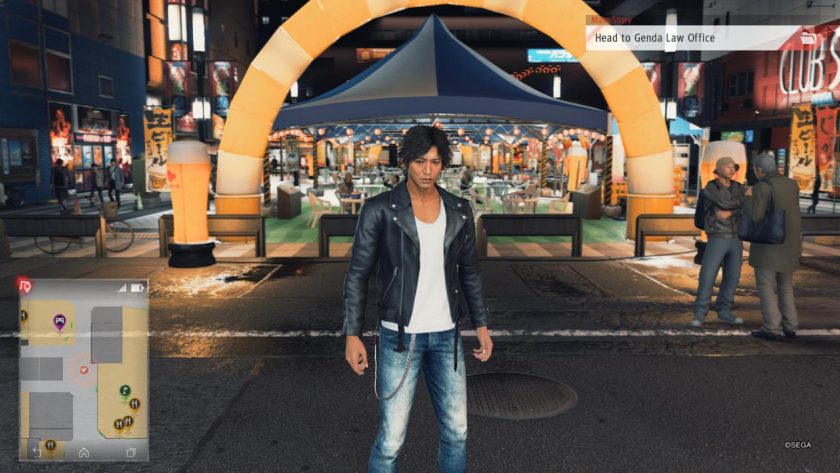 The NPCs in the game are all busy with their daily job as you will see them just walking around with phones in their hand and not caring as to what is happening around them unless you go near them, they will react to you , see you for a bit and then start walking again.

Few lanes are very narrow and small and there are awful lot of people most of the time in such lanes making your running a bit more difficult especially if some Yakuza is behind you coming to beat you down and you are low on health.

The music and sound here have been top notch as just like another Yakuza game. Only complain however here, would be on the side quests where the characters do not talk in the cutscenes and do not have their own voice. They have a preset queues of smiling, angry or anxious emotions that get carried out on almost all NPCs you come across which is actually disappointing.

Judgment is a worthy game for all the time I have spent playing it. I did not do a lot of side quests as I got bored really fast and I only did the main quests and a few sides to spice things up in between. The plot however from start till the end is very grappling with great deep storytelling and obviously the character development that happens during your entire playthrough as you will realize when the time comes as to what I am referring to.

As a Yakuza fan, this game made me happy but sad as well that it could have done much better when it came to few things in side quests and also the pacing of the main storyline. But overall, a true yakuza fan should not miss playing this game.

Amazing story from start to finish

Deep characters with proper development down the line

NOTE:  The game key was provided by e-expressgames for this review. Special thanks to them.

Judgment is a worthy game for anyone new to the yakuza universe and is a breath of fresh air for those who have been a long time fan of the Yakuza franchise. Pulling a spin- off is tough but the devs did a wonderful job in creating a beautiful city of Kamurocho with deep narrative characters while building a proper main quest for people to enjoy with lots of extra side content on the side as a bonus. Apart from the minor voice issues and pacing, this is a must place game for any yakuza fan out there.