Persona 5 released three years ago and has turned into Atlus’s most successful outing yet, both critically and commercially. In the following years that would surprise nobody “that’s already” familiar with Atlus, the Japanese video game developer announced several spin-offs over the IP, cross-overs with other game franchises like Super Smash Bros. and an updated version of the game with Persona 5 Royal.

Persona 5 ranks as one of my top 3 games of all time, right beside Chrono Trigger and Bloodborne. The excruciating wait for its release, further exacerbated by several delays, was well worth it as P5 delivered on all fronts, mixing deep and layered game mechanics with a poignant story that’s socially relevant, elevated further by a groovy soundtrack and eye-popping visuals.

The great thing about non-static media like videogames is the opportunity to improve a product over multiple iterations. And while Persona 5 may be one of the most polished games out there, it had its fair share of flaws. The question then is, did Atlus take all the criticisms as valuable feedback to improve the game? Does Persona 5 Royal warrant the full-price for newcomers and veterans alike?

A lot has changed for me since my first time playing Persona 5. I now work as a game designer. I have also been learning Japanese for a year and a half. So my return to this game was through a thoroughly different lens. I wanted to take each element apart and study them, I wanted to explore all alleys and read the kanjis on signs. I decided to play the game on “Merciless” mode, the hardest difficulty setting in the game. I’m only 20 hours into the game, so I’ll give my impressions up until the first Palace.

Persona 5 is a game that wears its influences on its sleeve. While the franchise as a whole draws a lot from Carl Jung’s work, this particular iteration takes its inspiration from the adventures of Phantom Thief Arsene Lupin by Maurice LeBlanc. The opening cutscene is a direct reference to “The Arrest of Arsene Lupin” (Lupin’s first-ever appearance) and sets the tone for the entire game. Many may argue that the game lacks subtlety, but subtlety has never been a thing for the ‘Gentleman Thief’ genre and if the in-your-face UI wasn’t any indication, it is not a priority for Persona 5.

I did not expect Persona 5 Royal to introduce new content almost immediately. You now have a grappling hook which changes how you move around. The dungeon designs are similarly tweaked to add more verticality. Persona 5 Royal’s new party addition, Kasumi, also shows up and hints at an interesting character arc. These additions seamlessly fit into the existing narrative of Persona 5 as if they always belonged there. 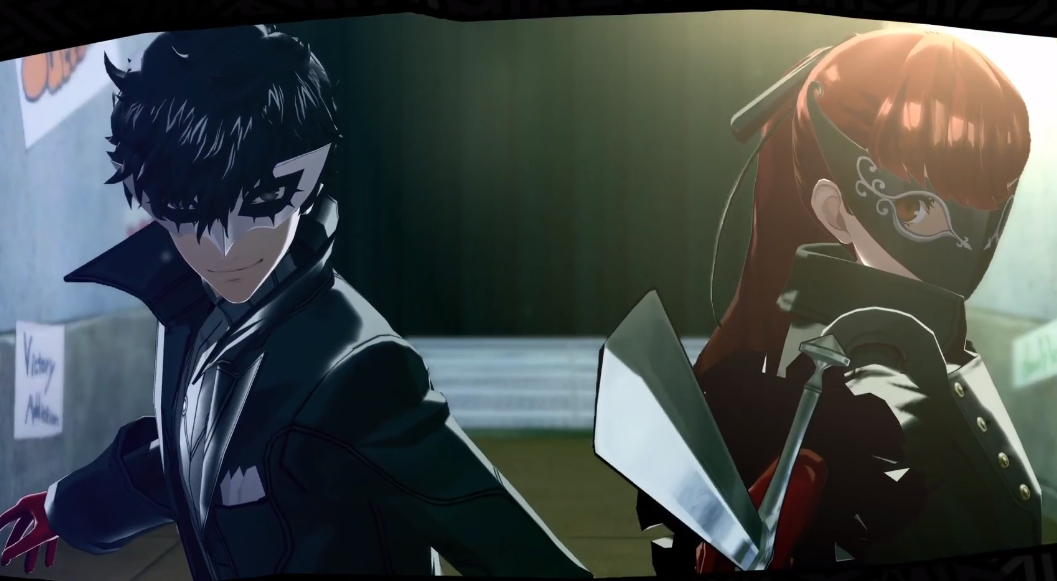 In the next few hours, I saw several new dialogues I didn’t remember being in the original game. Minor tweaks have also been made to original dialogues. Those who played Persona 5 will know that the game immediately tackling some pretty dark themes including sexual harassment and power abuse. While I applauded the game for going there, the dialogues seemed to be a tad bit euphemistic. It felt like Atlus was skirting around the issue to avoid some controversies. Persona 5 Royal is a lot more explicit with pointing out the heinous acts of the corrupt antagonists, giving more teeth to its story. The added dialogues go a long way in strengthening your resolve to take down the villain and make the victory that much more satisfying. 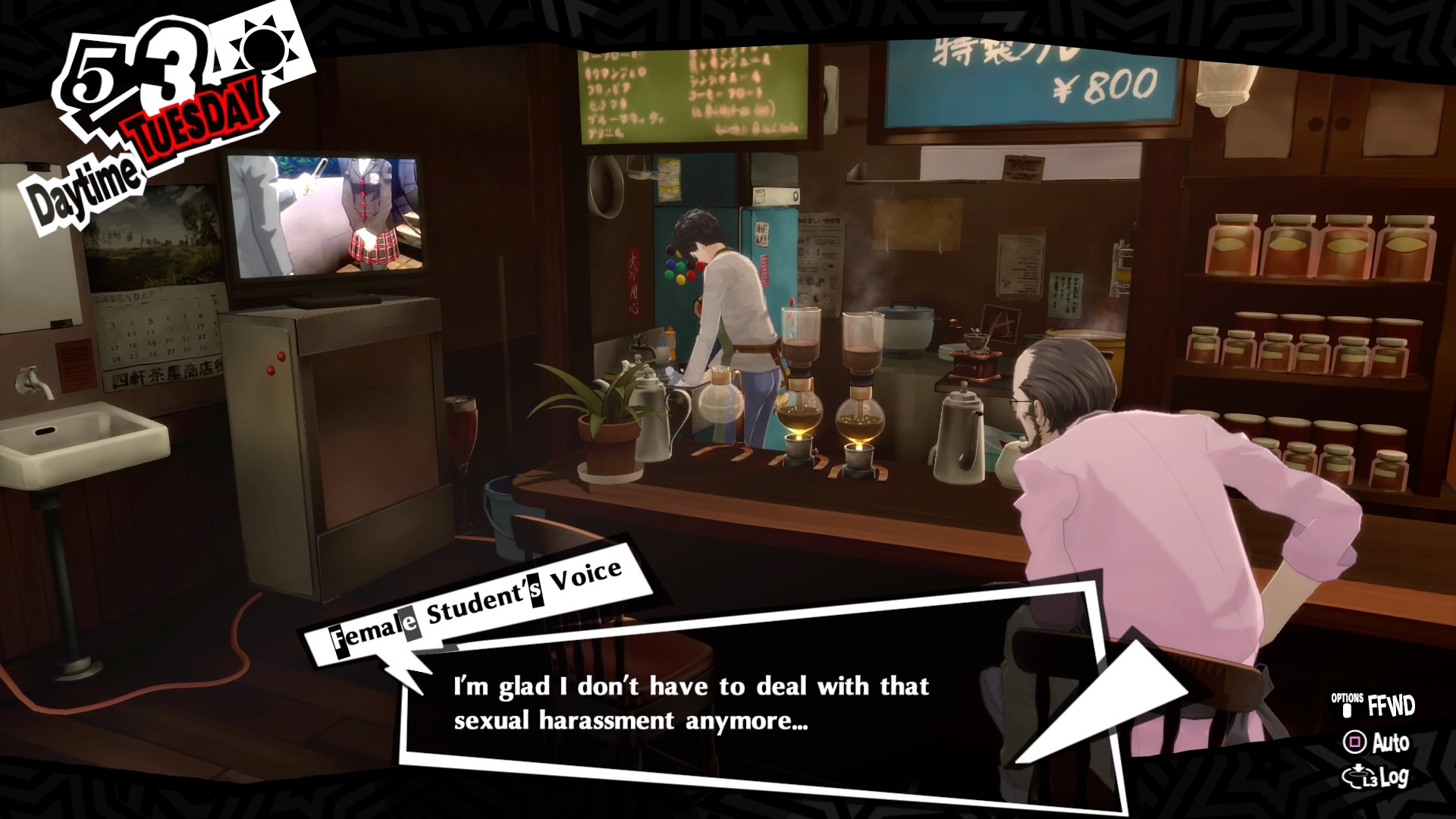 The additions have not just been made to the dialogues, but the character portraits associated with these dialogues. Characters now have multiple portraits that they keep swapping through between dialogues. It might seem like a small thing, but it helps in making the scenes feel less monotonous, considering especially, that there’s a lot to read in this game. There are also new portraits for when someone calls you and added visual effects for dialogue windows. It’s nice to see the developers pay close attention to such minute details. 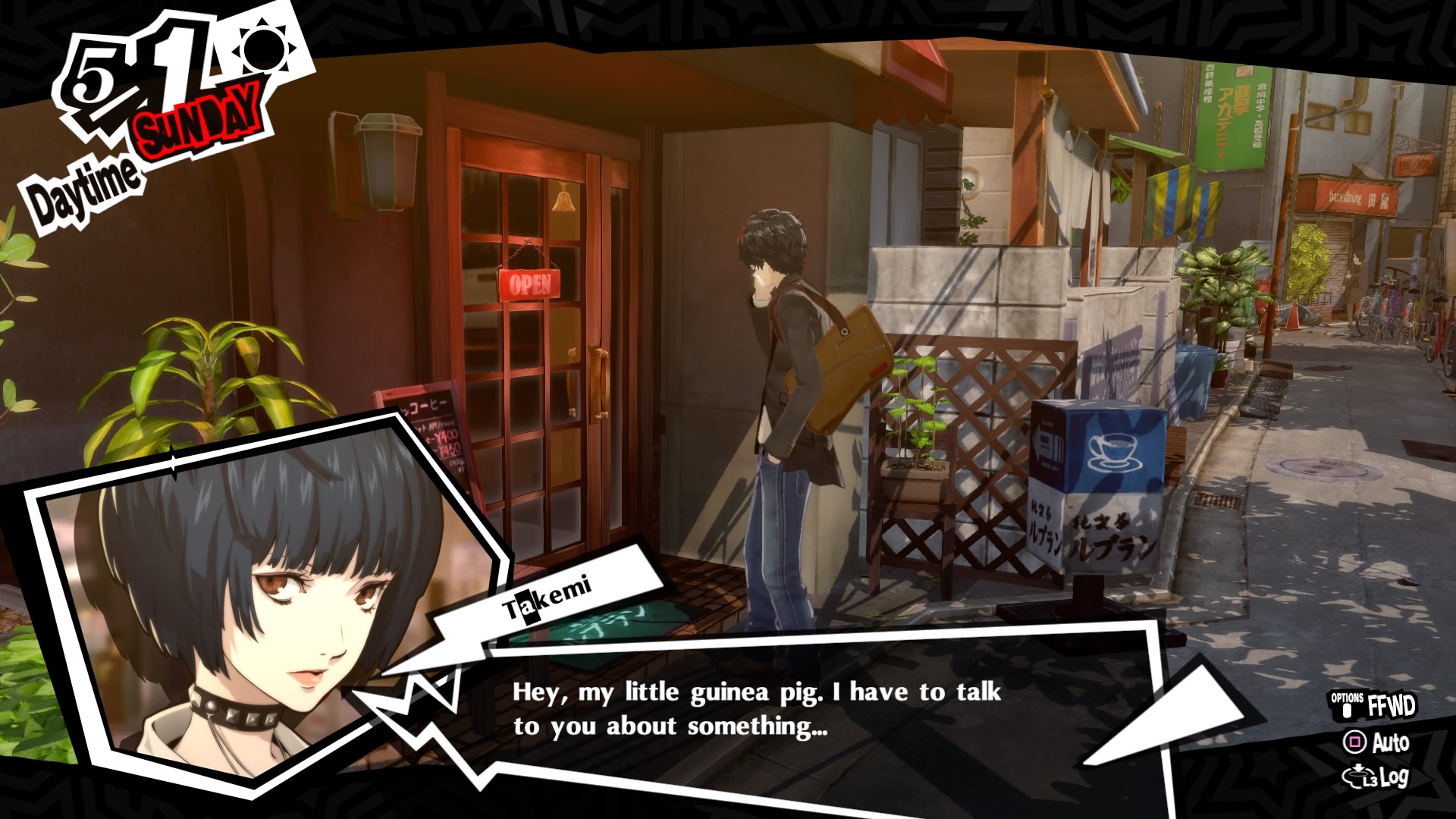 A huge part of Persona 5’s appeal is that it acts as a Japanese high-school life simulator. You progress through the game in a calendar-based format that spans over a school-year. During this time, you can hang out with friends, date your teacher, work part-time jobs or *gasp* study. My favorite moments are during the classes when teachers ask you questions to answer. So, I loved that the developers expanded upon this. Now, the teachers also ask your confidant certain questions, who will turn to you for help. It all adds up to building a great social school experience.

While I love this format, I understand how it can be stressful for those who feel they struggle with time management. Atlus has now added features that give you recommendations on confidants (friendly NPCs) to visit and stats to improve. If you’re connected online, you can also check what other people have been doing on a particular day. If you hang out with a particular confidant, they might even call you later, giving you additional dialogue and further opportunity to improve your bonds. The developers have put in a sincere effort in improving the experience so that you don’t feel like you’re doing things wrong. As the loading card tells you, you can surely ‘take your time.’

All your actions in the real-world will improve your skills in combat as you navigate the Palaces in the Meta-verse, a cognitive manifestation of the collective unconscious, or in simple words – dungeons. The palaces themselves have been tweaked significantly. Apart from added verticality for the grappling-hook driven navigation, there also exist new hidden rooms which contain Will Seeds. There are three Will Seeds in a Palace, and finding each one rewards you with a unique accessory as well as restores a bit of your SP. Considering how vital SP management is in executing dungeon runs efficiently, these SP boosters are a nice touch.

Playing on ‘Merciless’ meant that I had to be a little more cautious with my approach, relying more on stealthy ambushes. Here, again you see Atlus making minor adjustments to improve the experience. In Persona 5, you fought to the tune of ‘Last Surprise’, which while catchy in itself, can get quite stale. While ‘Last Surprise’ still exists as a fighting track, Shogi Meguro has composed an all-new track called ‘Take Over’ which plays instead, should you successfully ambush your enemy. The more upbeat nature of this track feels like a reward in itself for pulling one over your opponents and adds to the game’s power fantasy of emulating a gentleman thief. While I praise Atlus for these improvements, I have to say I’m disappointed they didn’t improve the experience of sneaking. In Persona 5, it was a nightmare when the game would unintuitively lock-on to an enemy when instead you wanted to sneak into another location or vice-versa. Atlus probably tackled this issue by making you completely invisible when in sneak mode but this broke the immersion for me. This feature remains almost untouched in P5R, which comes as a letdown, despite it not breaking the game in any way.

I noticed that the ammo refills after every match. This greatly improves the combat since I don’t have to be stingy about shooting my opponents anymore. All party members can baton-pass each other immediately, which means you can chain your attacks much faster to end combat encounters. There are more unstable shadows that appear and the boss battles too have added mechanics. The coolest thing happens during Kamoshida’s battle when side-characters come into play. The developers make phenomenal use of formal elements of game design to strengthen their dramatic elements and vice-versa. 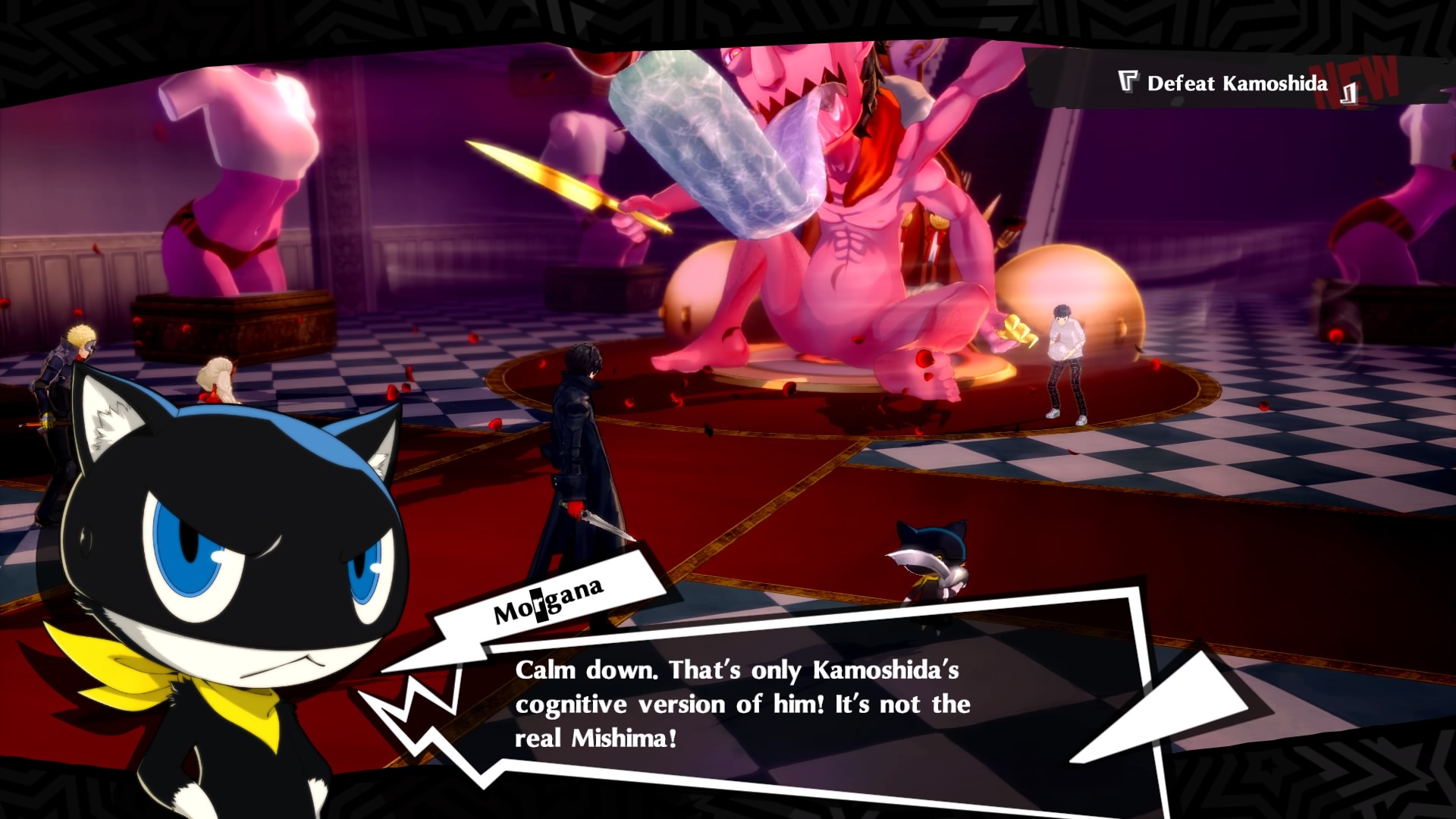 One of the major criticisms was the narrative dissonance that occurs with beating the main boss too early. Since the game’s progression is calendar-based, you have a set time limit for clearing each dungeon. However, if you clear a dungeon way ahead of schedule, the antagonist simply disappears from the story and won’t show up until the end. This broke down immersion for many players. I’ll be happy to report that from what I’ve seen, the game certainly does acknowledge whenever you beat the dungeon. It’s not much, but it is enough of an ointment to soothe the experience. 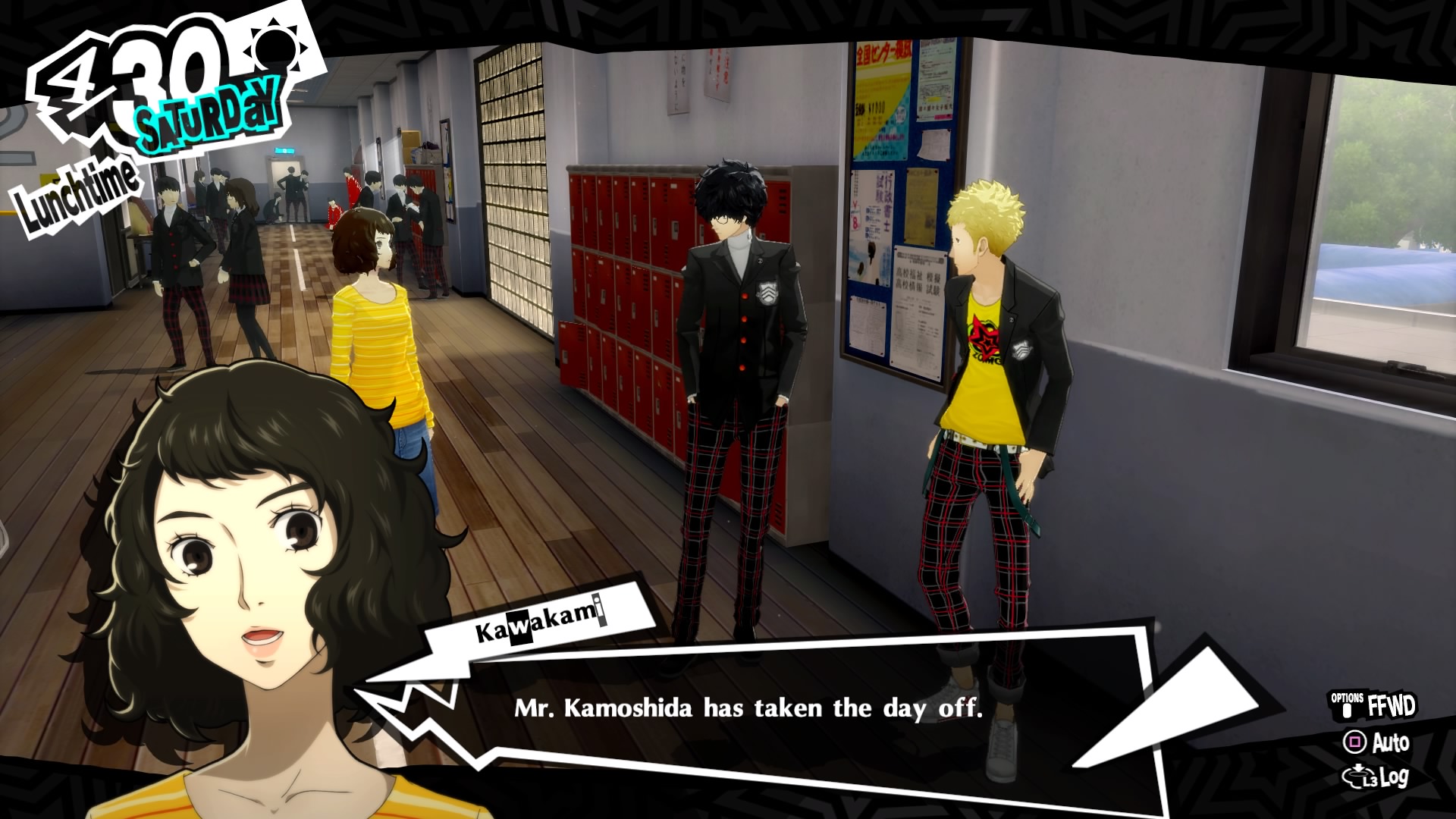 I’m only 20 hours in what’s going to be an easy 150-hour campaign, and while my bias to Persona 5 clearly shows here, Persona 5 Royal has exceeded all my expectations. A re-release of this game has no reason to be this good. I have been spending hours navigating every nook and cranny just to see how things have changed. From cherry blossoms in Shibuya to new signboards. I’m reading all the notice-boards and carefully listening in on all rumors and minor NPC-dialogues on the off-chance I catch something new. The developers have shown their love for this project by incorporating community feedback into creating what will be Atlus’s greatest legacy.