So the Xiaomi Redmi Note 4 has been making quite a buzz in the mid-range segment.
The phone was launched on 19th January, 2017 at Delhi Xiaomi event. The device is available in 3 variants- 2GB+32GB, 3GB+32GB, 4GB+64GB. Other features remaining the same. This device is flipkart exclusive.
So first things first, the moment you hold the phone in your hand you will notice the all-metal body which is quite ergonomically rounded to fit in your palm, even though it feels a bit slippery. The rear camera and fingerprint sensor have been aligned the same as we saw on the Note 3. The phone may not be too light but then it’s not too heavy. The Body-to-screen ratio is optimal, making it feel quite compact for a 5.5-inch smartphone. On the top, there is the 3.5mm audio jack and an IR blaster, which allows you to use the device as a remote for other devices. The hybrid slot remain common, so you have to choose between 2 SIMs or 1 SIM and 1 memory card. The Navigation keys are backlit. A noticeable change- This time they have relocated the speakers from the back to the bottom of the phone.
The phone comes with MIUI 8 with android 6.0.1. Xiaomi has promised a NOUGAT update in the near future.

Xiaomi Redmi Note 4 has an IPS LCD panel with 2.5D curved glass on top, which makes it attractive. Xiaomi still hasn’t declared the type of glass used, so a tempered glass might come in handy, in case the device falls (and breaks?). The phone sports a 1080p display with a pixel density of 401 PPI (Pixels per Inch).
Sunlight visibility is not the best, but it does the work just fine. The viewing angles are appreciable, thanks to the IPS panel. Contrast and colour reproduction are noticeably better than its predecessor model.
The quality of the screen is pretty good for this price range.

The back of the device sports anodized aluminium which feels good in the hand. It feels premium considering its price. The thickness of the device is reduced by 0.3mm, which now stands at 8.4mm.
At the top, we have the 3.5mm audio jack, IR blaster, and a secondary mic. The back side has the 13mp camera with dual led flash and a fingerprint sensor. The bottom of the device houses a micro-USB port used for charging as well as data transfer to PC. This time they have relocated the speaker to one of the two grills that lie on either side of the micro-USB port, the other one being the primary mic. The right side consists of the volume rocker and power buttons. The left side has the hybrid sim slot tray which looks clean. However, the bezels are the same as the Note 3, but looks good due to the 2.5D glass.

While the camera has improved a little bit over the note 3, but it is still very average at best. On paper, note 3 has a 16MP rear shooter, but the note 4 performs a tad better despite its 13MP rear shooter. As said before the note 4 has 13mp CMOS camera with backside illumination (BSI) and larger pixels (1.12 μm). It comes with a dual tone LED flash with PDAF (Phase Detection Autofocus). In low light, the camera produced cooler images as we can see below. The camera did a pretty good job outside under natural light. We have 5MP camera on the front which is quite good. 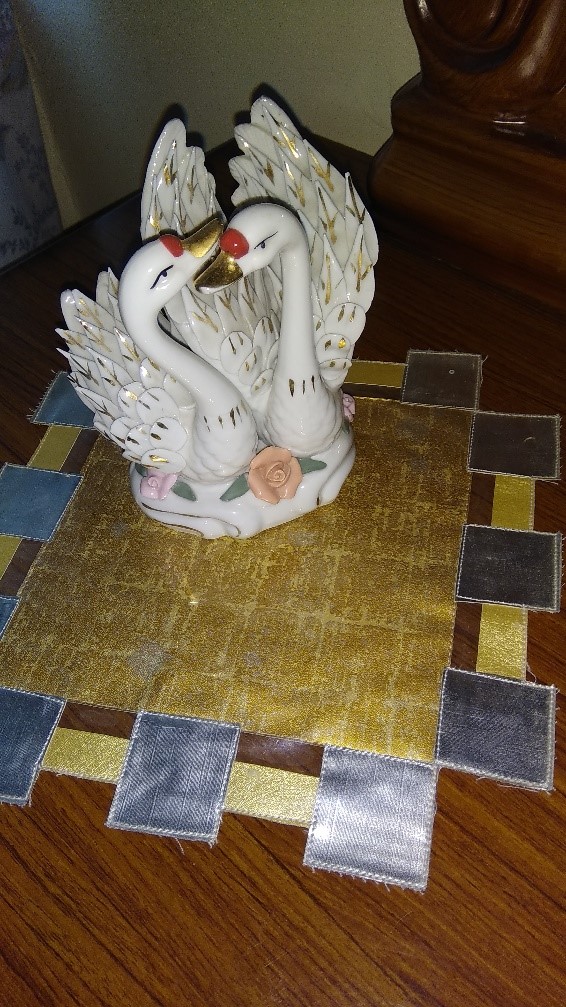 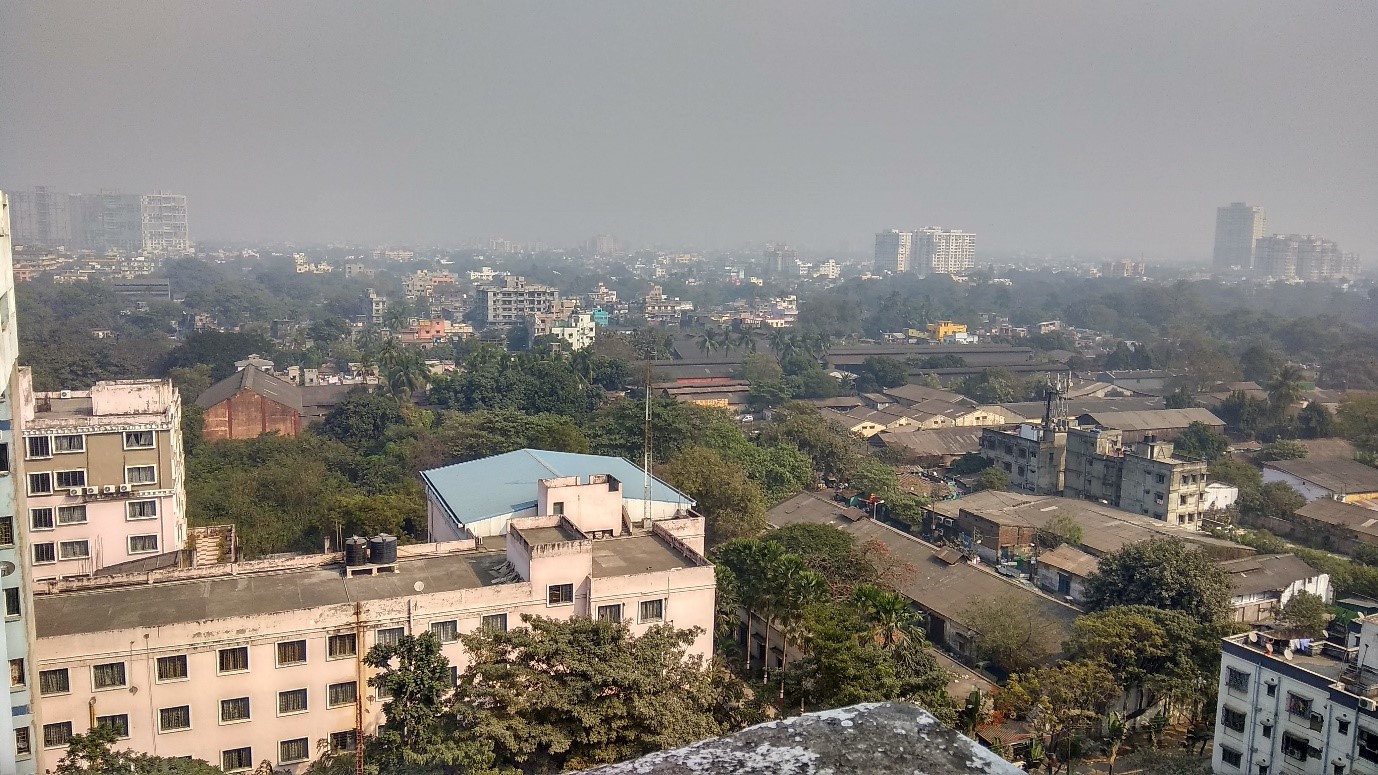 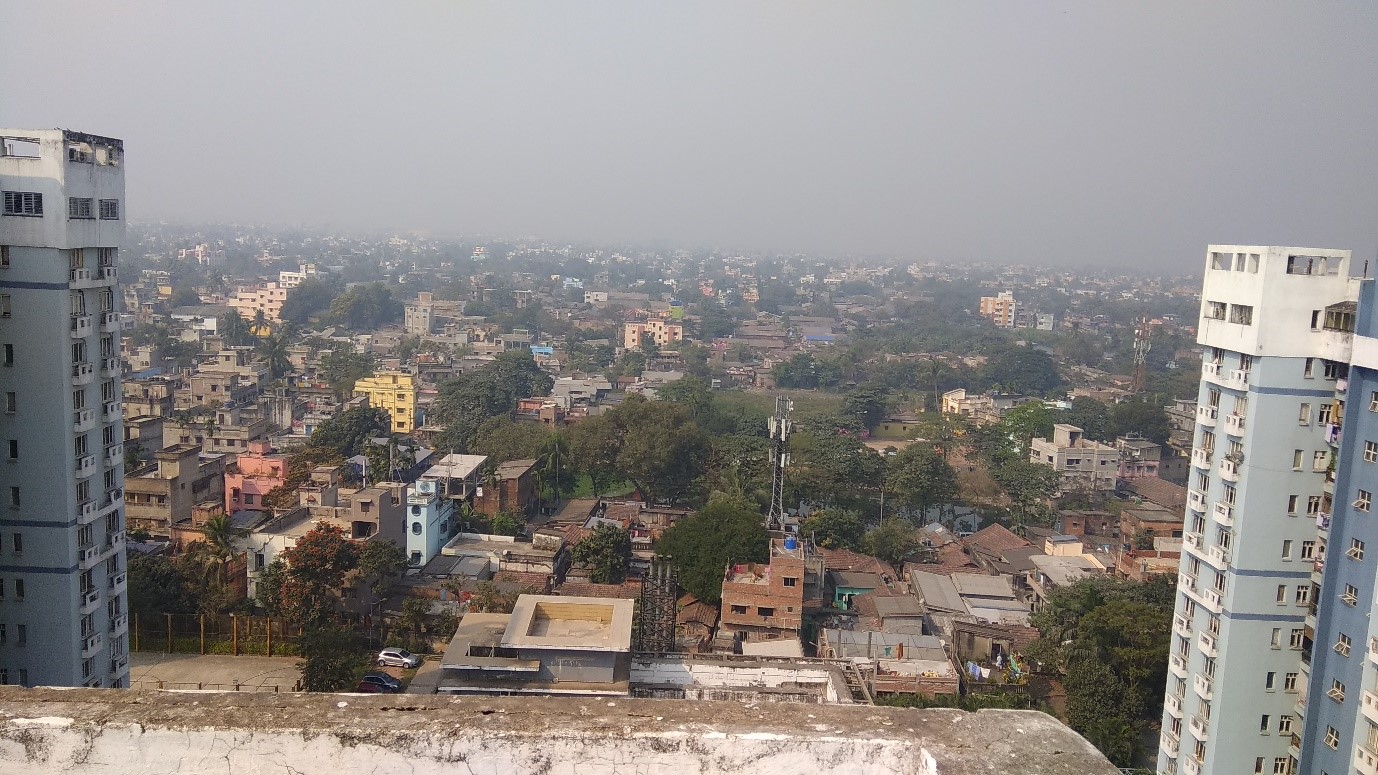 The battery, the most interesting thing about the note 4. Let’s think of the Note 3, which had the same 4100Mah battery, lasted easily over a day with heavy usage, and around two with moderate usage. This time, the efficiency of the 14mm SD625 has boosted the battery life even higher, lasting around 15-20% more. Thus, truly amazing battery life. Unfortunately, the phone does not support Qualcomm’s Fast charging, but the phone takes only 2hrs 20mins to charge from 0 to 100%. 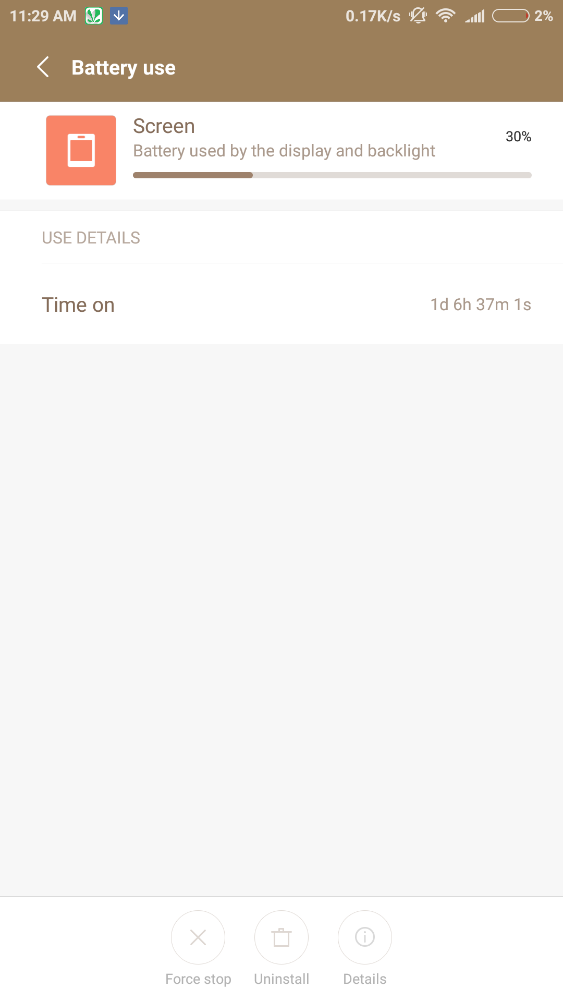 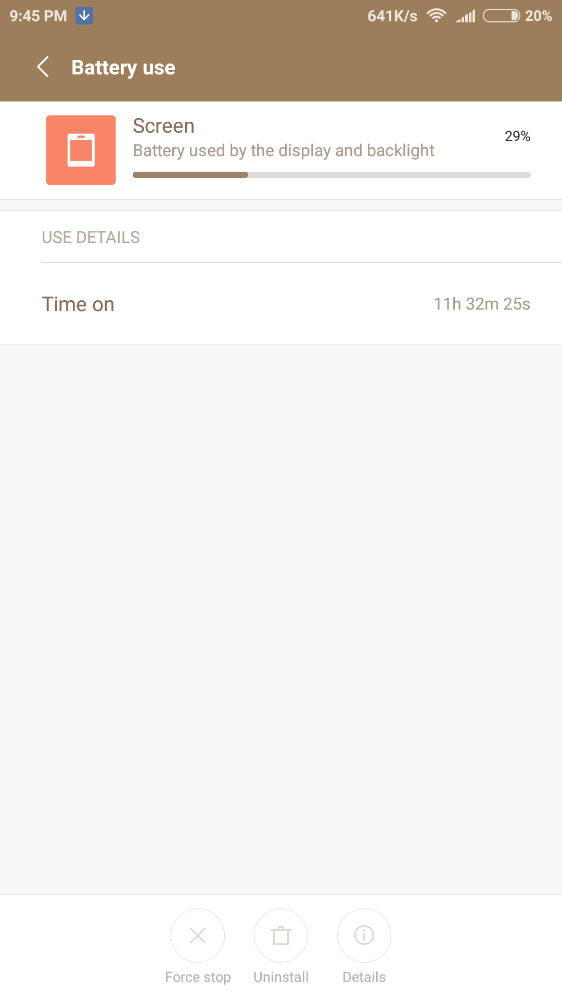 On the hardware side, this phone has a SD625 chipset backed by 2/3/4GB RAM with 32/64 GB of storage depending on what model you get. This might seem like a downgrade, which to some extent is, but the SD625 has its own advantages. It is built on a 14nm fabrication process, which makes it even more power-efficient. In real world usage, the 625 does perform pretty well, and while gaming for quite a long stretch, production of heat is very low. It might not be as powerful as the Snapdragon 650 but does the job pretty well in real world usage.

While multitasking we didn’t face any issues. We ran 10 apps simultaneously and switched between them without any lag. When the device boots up we get approximately 1.5GB free RAM out of 3GB.

Coming to gaming performance, we tested 7 games, out of which only Bully was lagging even on low settings and there were slight FPS drops in Hitman sniper, other games like dead trigger 2, MC5, real steel, GTA San Andreas, and NOVA 3 ran without any lag at maximum settings.

After 3hrs of continuous gaming, we experienced negligible heating of the device. 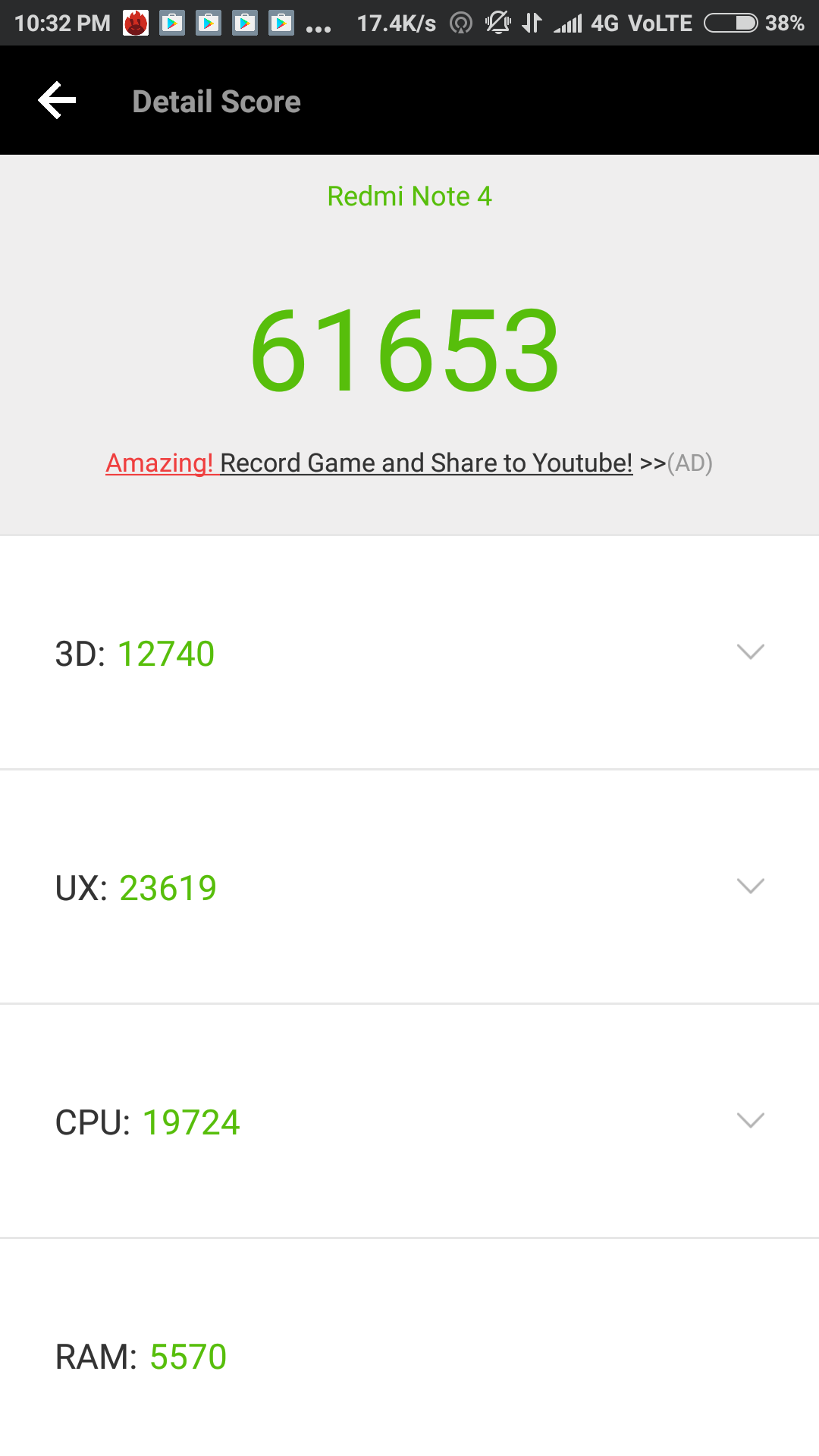 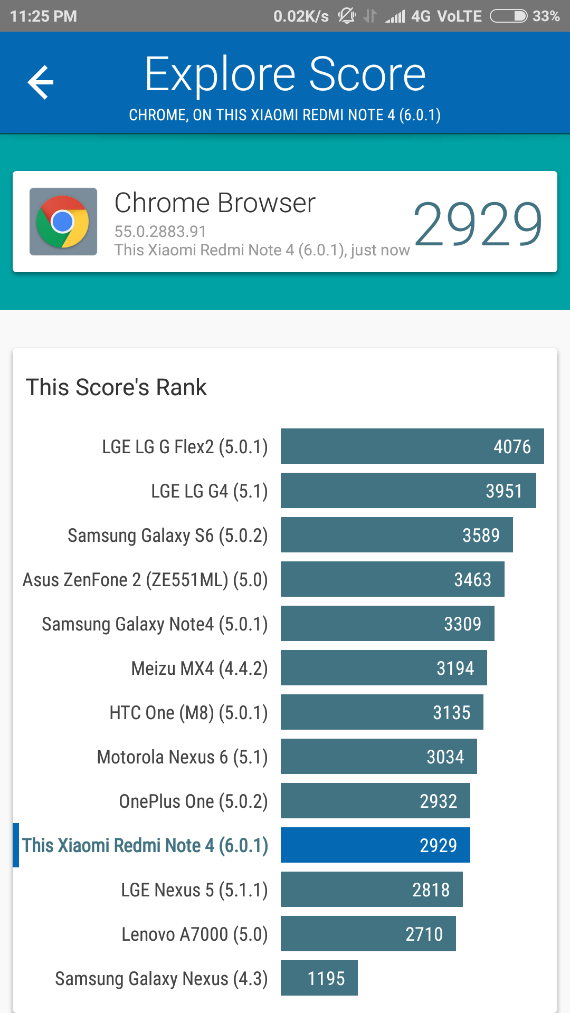 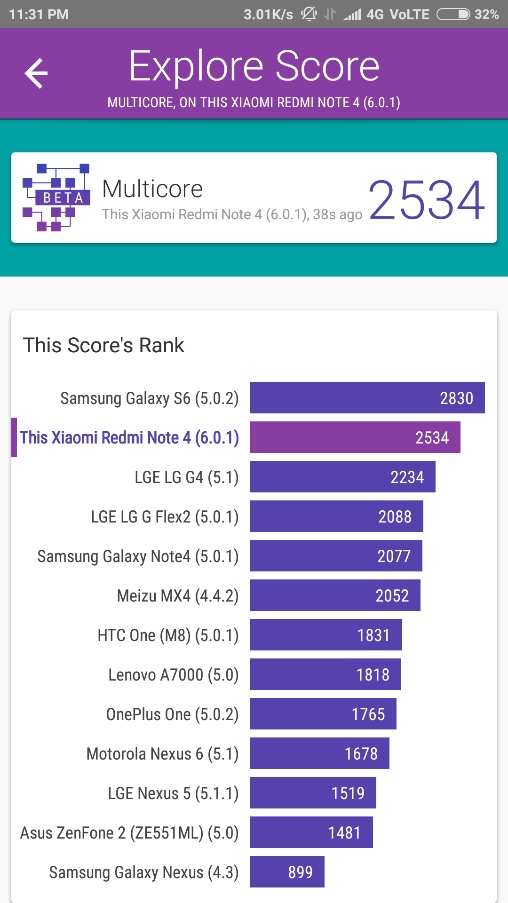 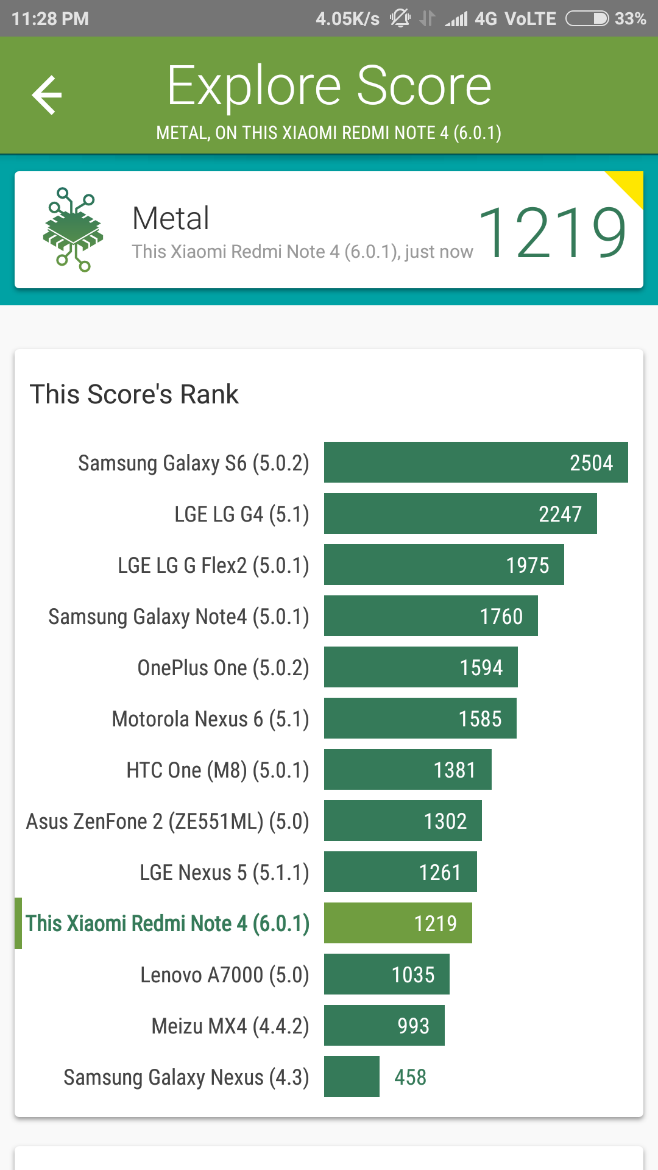 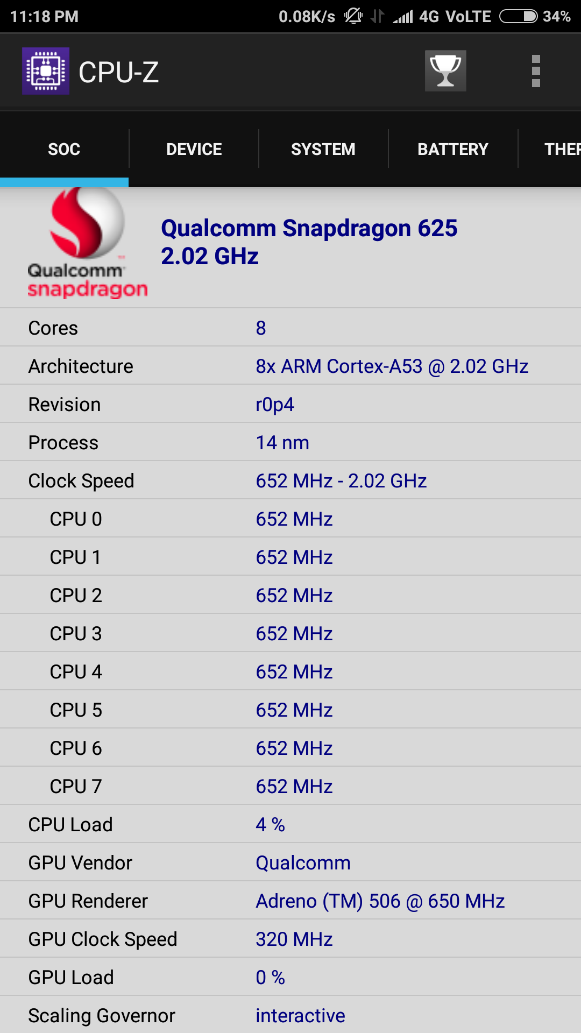 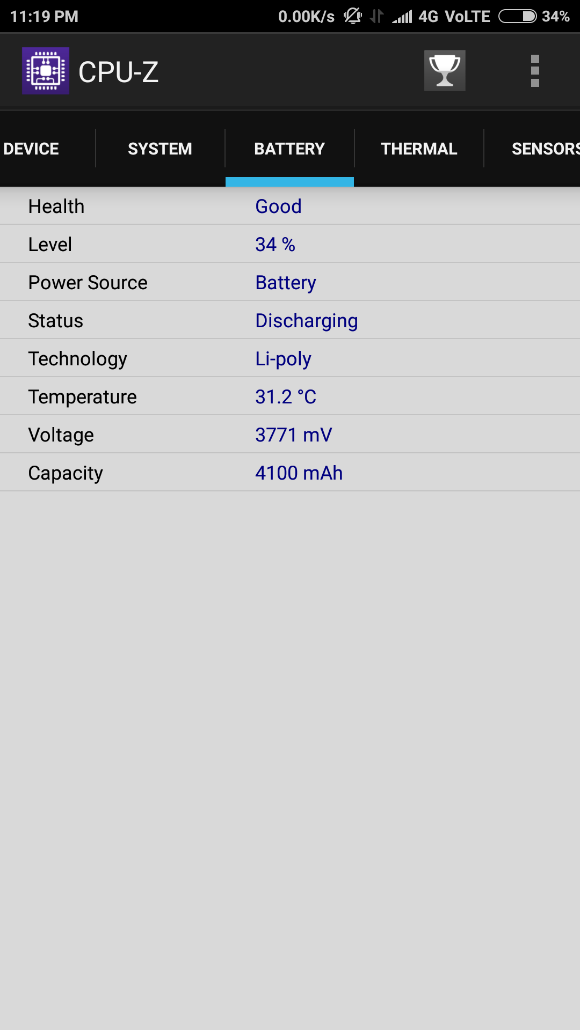 The Xiaomi Redmi Note 4 comes with MIUI 8 based on android 6.0.1 Marshmallow out of the box. As we all know MIUI has one of the best battery optimizations. As usual, we don’t get any app drawer, so we have all the apps in the home screen. Coming to notifications, it is also tweaked by custom MIUI skin. There are 5 themes pre-installed, but one can download other themes from the Xiaomi theme store as well. There is some bloatware, which is acceptable in a custom UI.

Hugo Barra, ex-Vice President of International, Xiaomi, promised that the device will be eligible for NOUGAT update when it will be released by Xiaomi. The user can download the beta version from the MI forum when it is available.

The phone comes with either 32GB or 64GB storage depending on the model you purchase.

With the new 4G bubble in India, the phone supports 4G LTE with VOLTE support. 4G is supported on both SIMs. The device supports all of India’s LTE bands.

For the price range of Rs. 10-13k the phone is pretty good. As it uses the SD625 processor it limits the capability of 4K videos. The phone is good for casual gaming and multitasking. The camera being pretty average as it cannot shoot 4K photos or videos due to the limitation from the processor. The battery of the device is exceptionally good. It lasts at least a day for medium-heavy usage of the phone. The display being unprotected by the corning gorilla glass, it is recommended to use a screen protector with the device. But it isn’t a worthy upgrade from its predecessor.

I'm not ugly, I just reduce my graphics for better performance.