Spider-Man (2018) for the PS4 has been one of the best games that came out that year alongside the God of War. Miles Morales is the direct sequel to the 2018 game acting as an extended DLC to it and shows the journey of Miles Morales and his newfound powers in the lively city of Harlem. 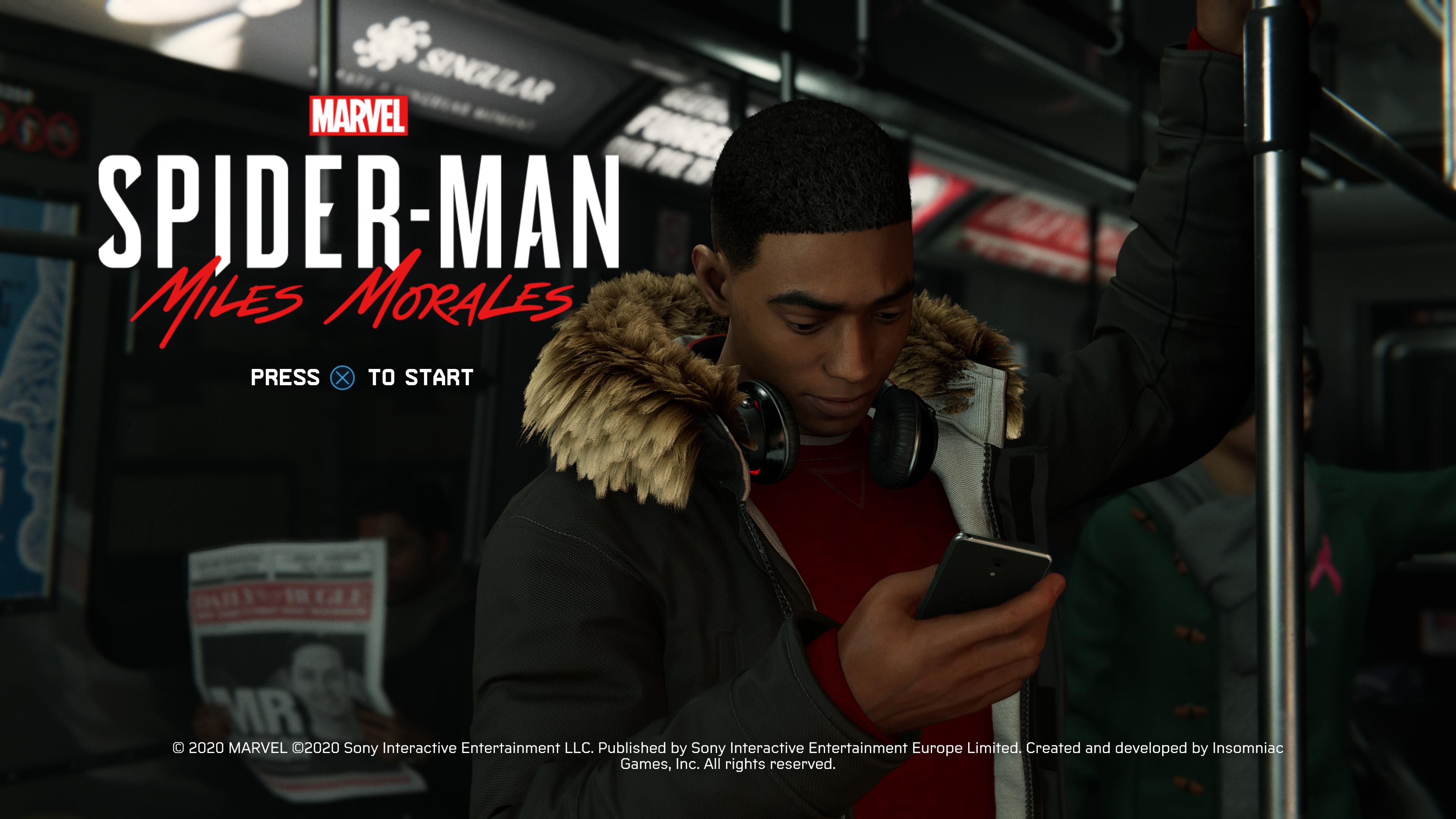 Peter Parker aka the Original Spider-Man goes on a vacation with MJ leaving Miles to take care of the city in his absence. Things do no pan out well for Miles on his journey as he discovers new foes and enemies to deal with alongside some shocking discoveries including new superpowers which he didn’t know existed in him. 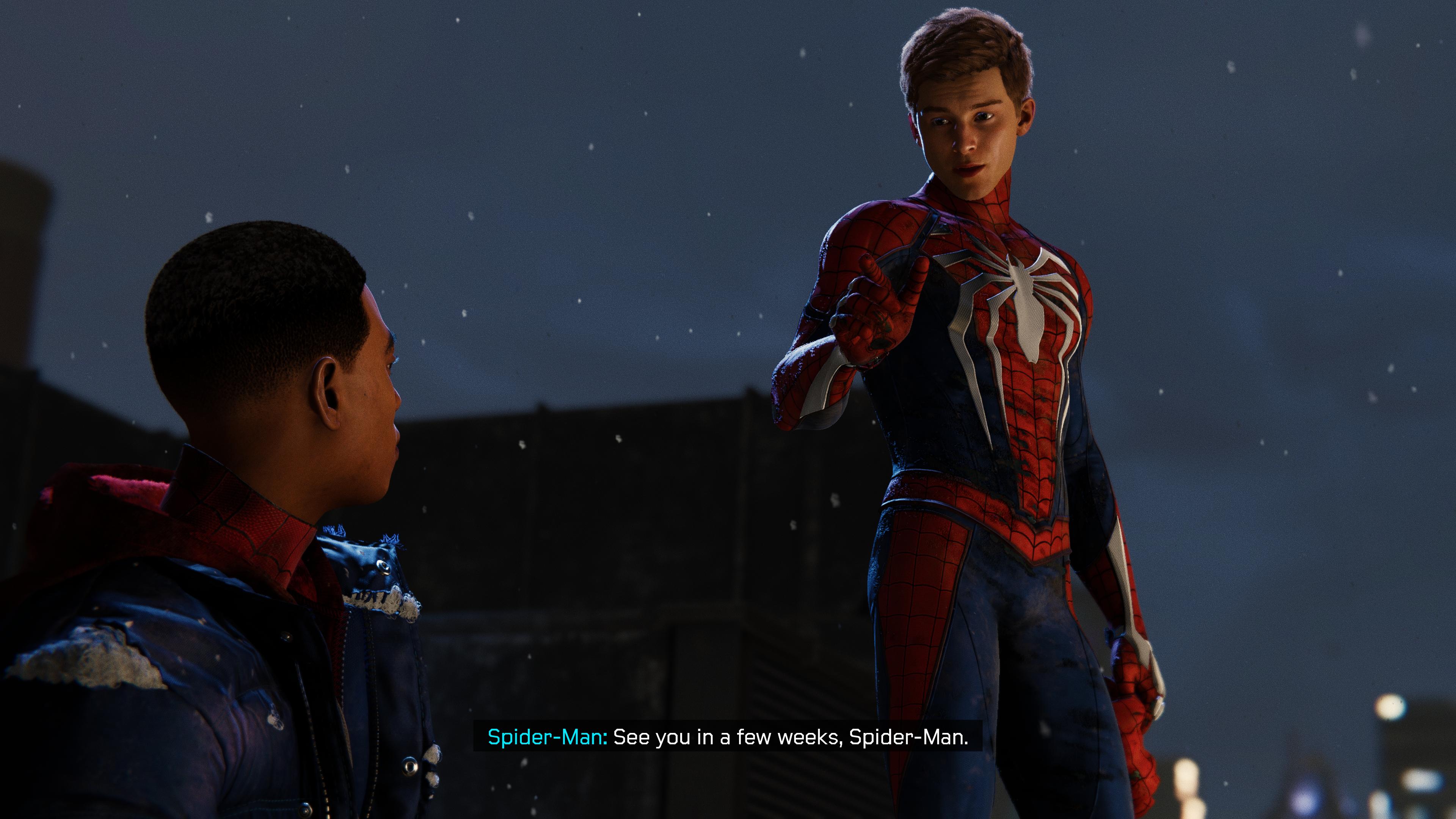 Speaking of Story/plot, there are a lot of loopholes throughout the game which stops focusing on the origin story of Miles, which started off great during its initial opening sequence but starts to lack in-depth thereof. Miles Morales has a lot of heart just like the first game and he never stops giving up, no matter the cost, just like Peter. 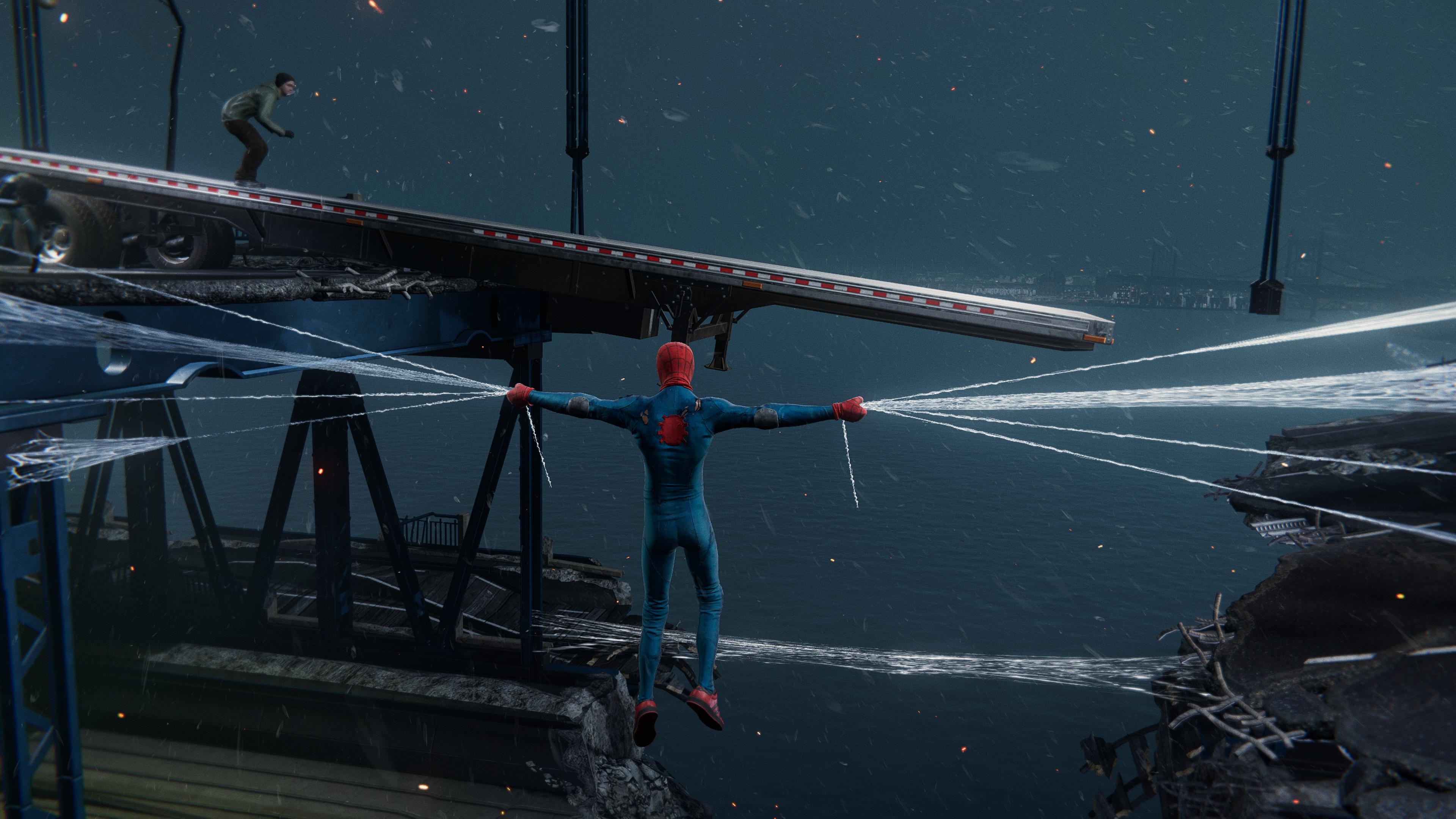 The city of Harlem feels lived in with characters having their own animations and facial expressions. There are now more people in your characters FOV (Field of View) as compared to the first one and the swinging mechanics is now better than ever with Miles having his own style of swinging where he uses the power of his freestyle technique and leaps his entire body in the air as opposed to peter using his upper body strength. 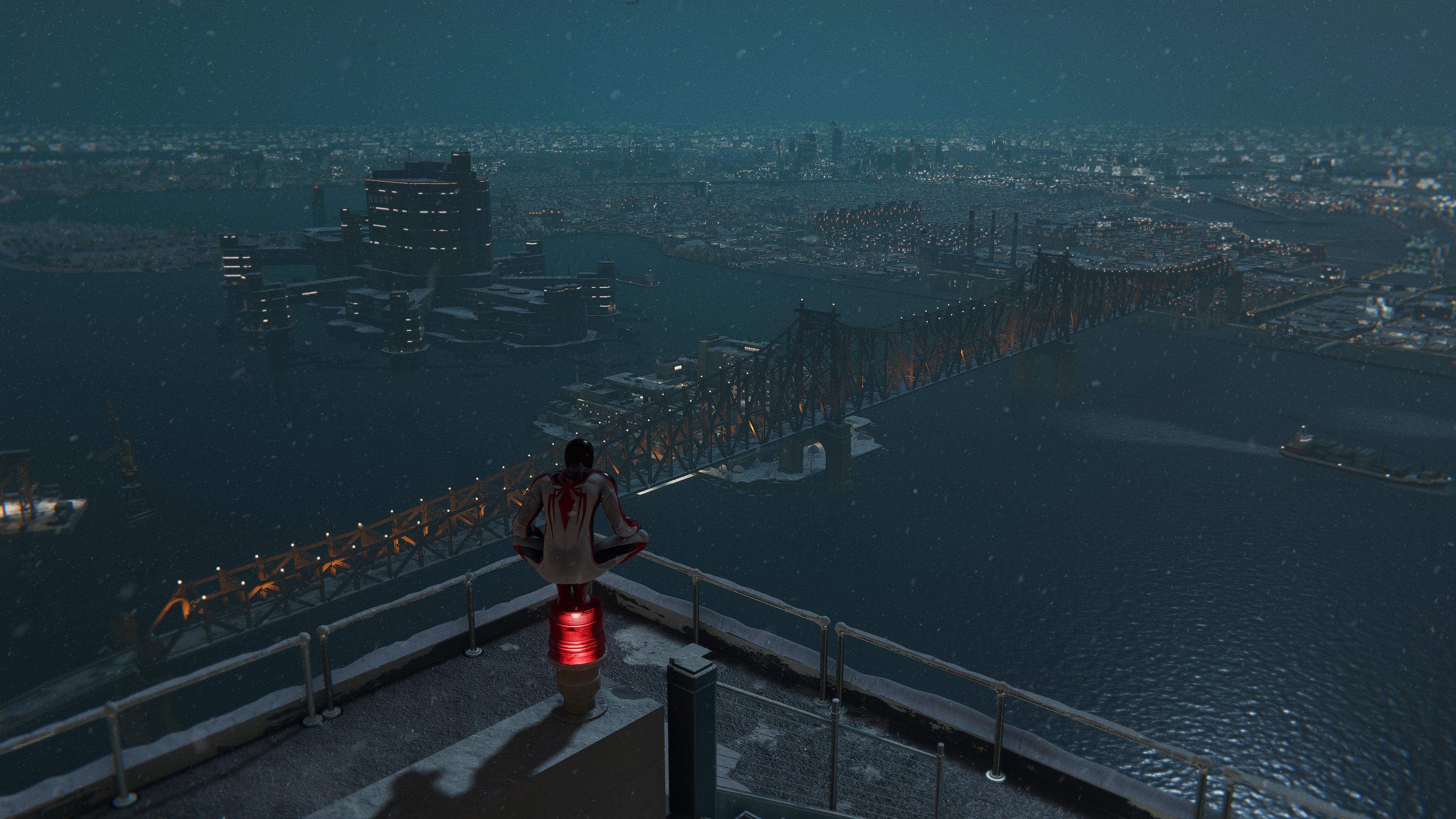 The basic swinging mechanics still remain the same but have been further improved upon by Miles’s new powers which boost In-air swinging combos. There are new suits and gadgets to use as well which can be upgraded by using tech points that can be gained by finding underground tech caches scattered throughout the city and solving daily crime missions. 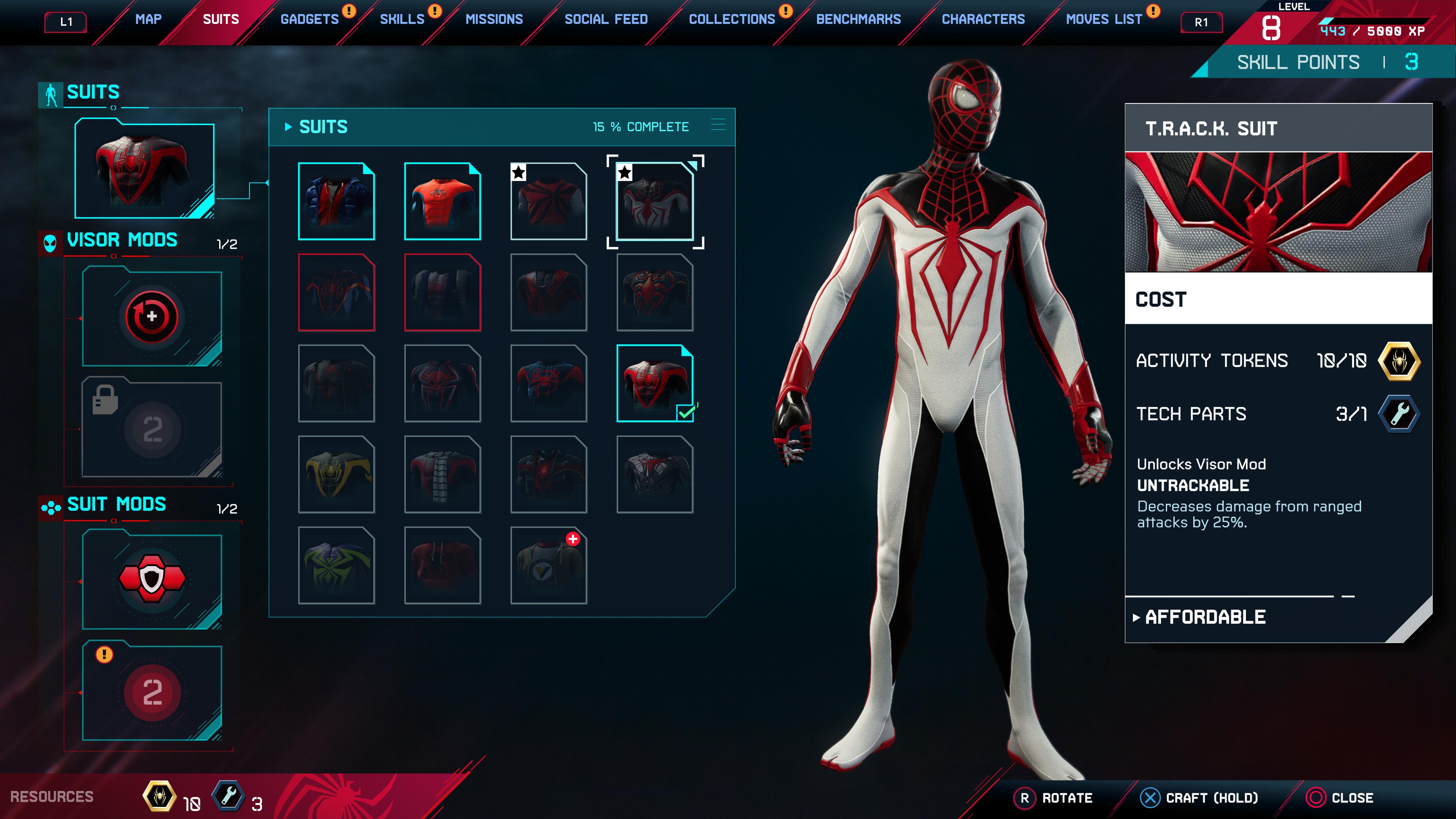 Miles now has a phone app designed by his best friend, Ganke. Throughout the game, Ganke acts as a tech sidekick who helps you on your main, sides, and daily crime missions. The Phone app helps locate crime missions and shows the rewards that you will get by finishing them. After completion, you can use those points in unlocking new suits, upgrading gadgets and suit mods or unlock new skills as you level up just like the first game. 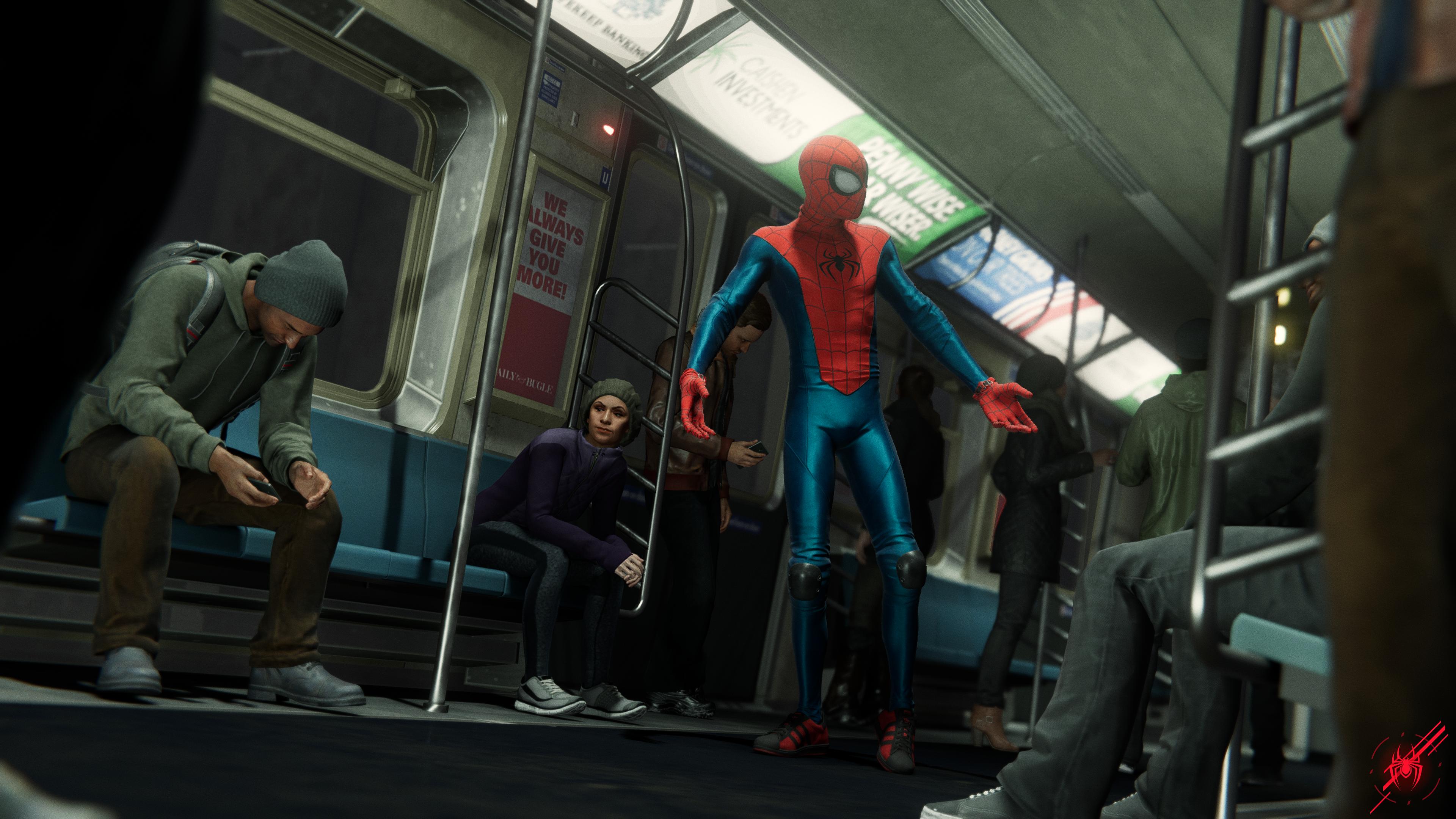 The daily crime involves fighting bad guys trying to rob a car or as simple as finding a lost kitten. Then there are civilians who need help due to the weather in Harlem being all snowy making their trucks stuck in the snow and other similar activities. All these side/daily activities have variety in them and do not feel repetitive.

Now, let’s talk about the things that I did not like. After every main mission, you are told to check the spider-map phone app for activities that get annoying after a while. As I previously mentioned at the beginning of this review, there are a lot of plot-holes including the origin of a new enemy gang called the underground. We don’t know who is funding them and why and how it all came to be, we don’t know how Miles got his new Venom powers as well, it just happened and you are told to push L1+ Square to activate such new powers. 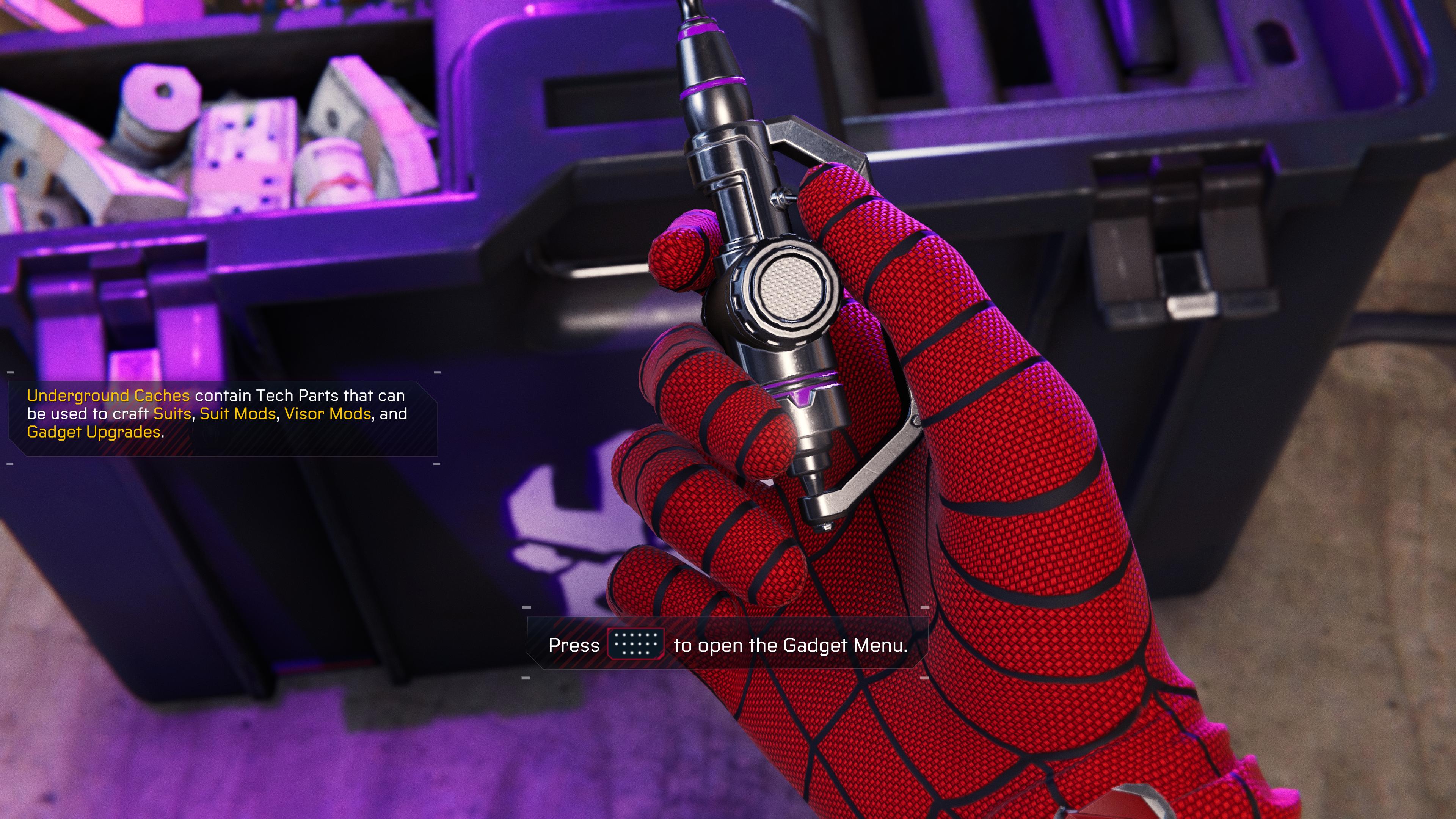 Stealth missions are the same as the first game. Miles unlocks camouflage after a certain mission which can be used heavily to your advantage while doing stealth missions. Camouflage makes it easier to hear/listen to enemy conversations which unlock new info on certain locations needed for the mission. You can also use camouflage as an offensive tool and web-strike people and go back up in the wall again so that after a while, enemies stop looking for you and you can redo the whole cycle again. 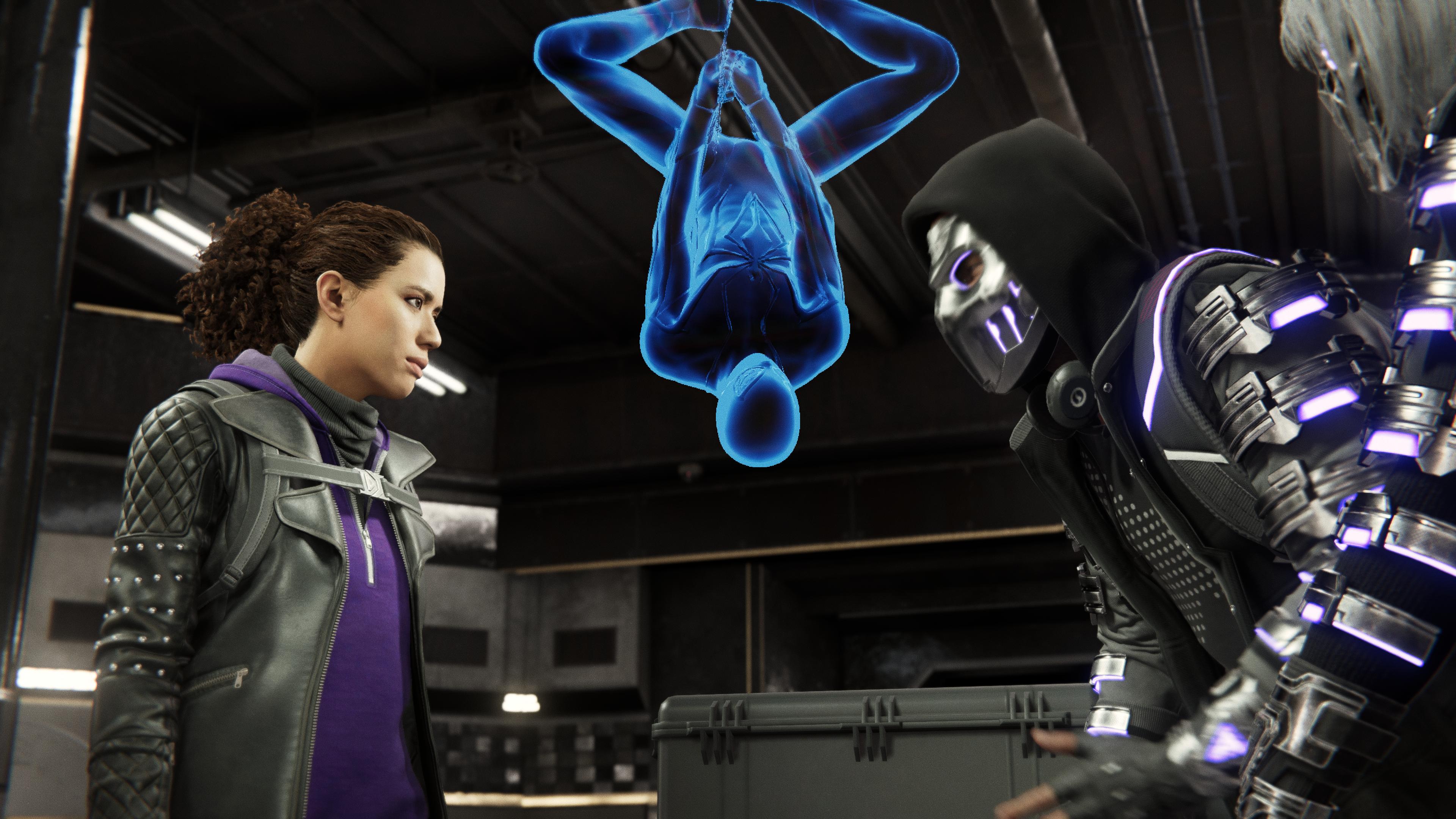 Speaking of new gadgets, we do not have many AOE based gadgets which would have helped in controlling huge waves of enemies. Suit mods do a good job at what it did back in the first game as well which is a plus. On the plot side, the story was rushed and there aren’t many boss fights as well. To keep things spoiler-free, I won’t name any or tell how many there are in total to keep things fresh. 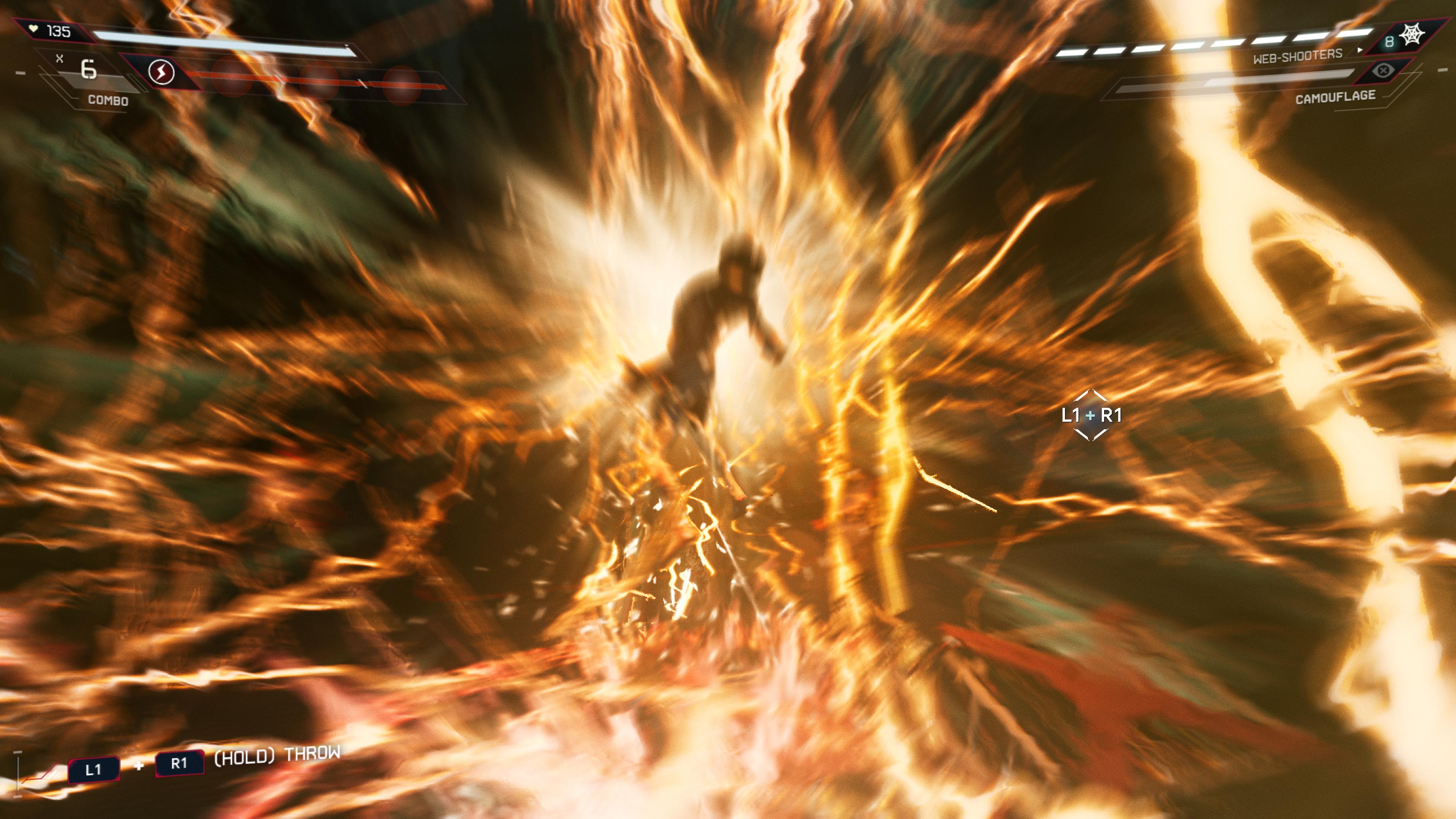 Speaking of Performance, the game runs at locked 30 on the PS4 Pro and looks absolutely stunning. The weather effects have improved and now looks like a proper next-gen title. Miles Morales can be seen as a tech demo for PS5, as to how The Order 1886/Killzone was for the PS4. Every building now has even more detail in its texture, roads are mostly covered with snow and the snow details can be seen on signal posts and sides of the buildings as well. When you remain still, parts of snow also settle into your suit changing into liquid. These subtle differences add a lot to the look and feel of the game. 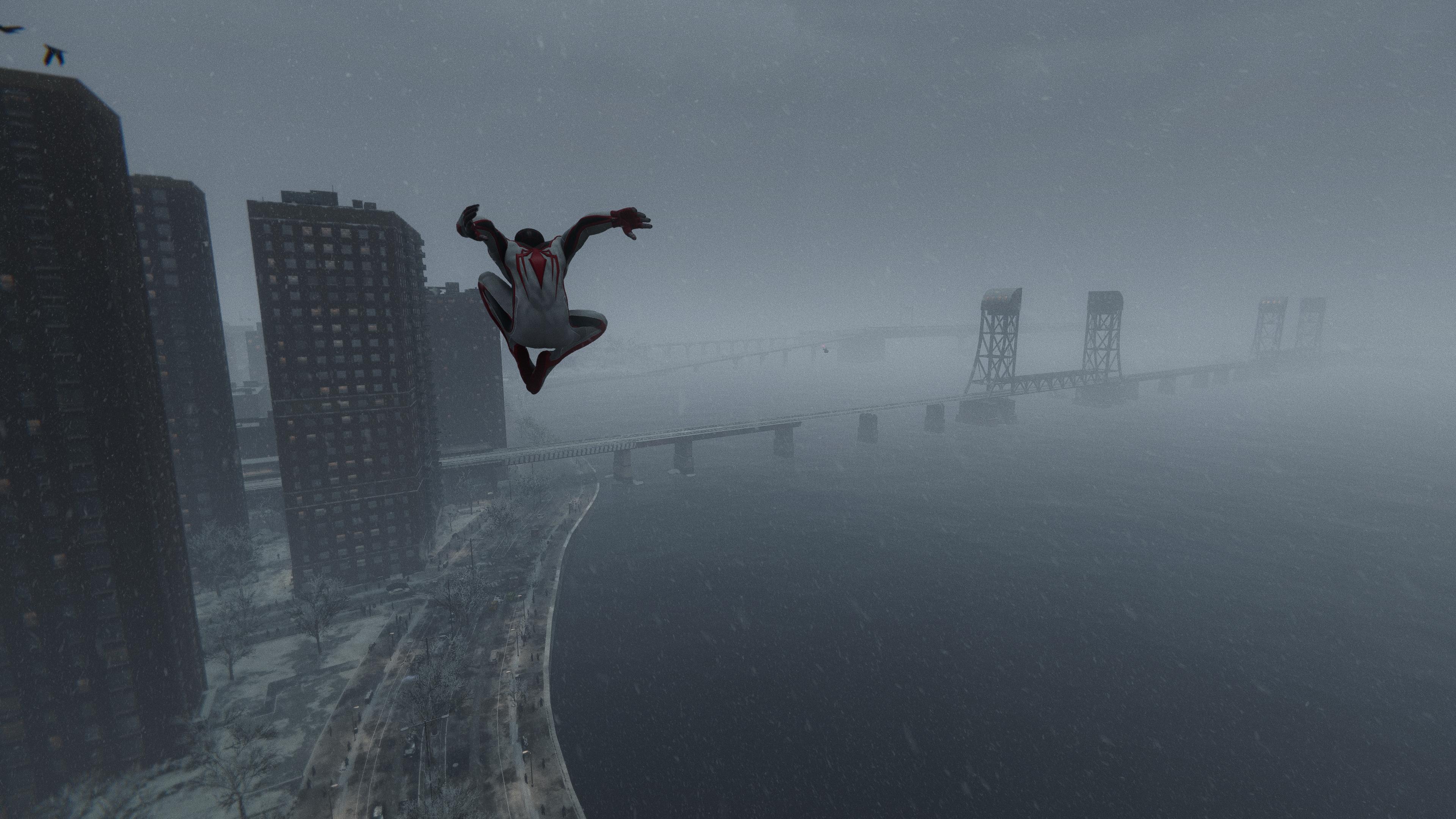 Loading times have significantly improved as well. After you die, you come back to the game within 2-3 secs as opposed to 10-12 from the first game. This in itself is a massive improvement which goes to show that loading on the PS5 will be almost instant. First boot is also faster than the first game, loading a save file takes less time as well which is again a huge plus point. Photo Mode is included in Miles Morales as well. It’s decent and offers the same features as the first game. 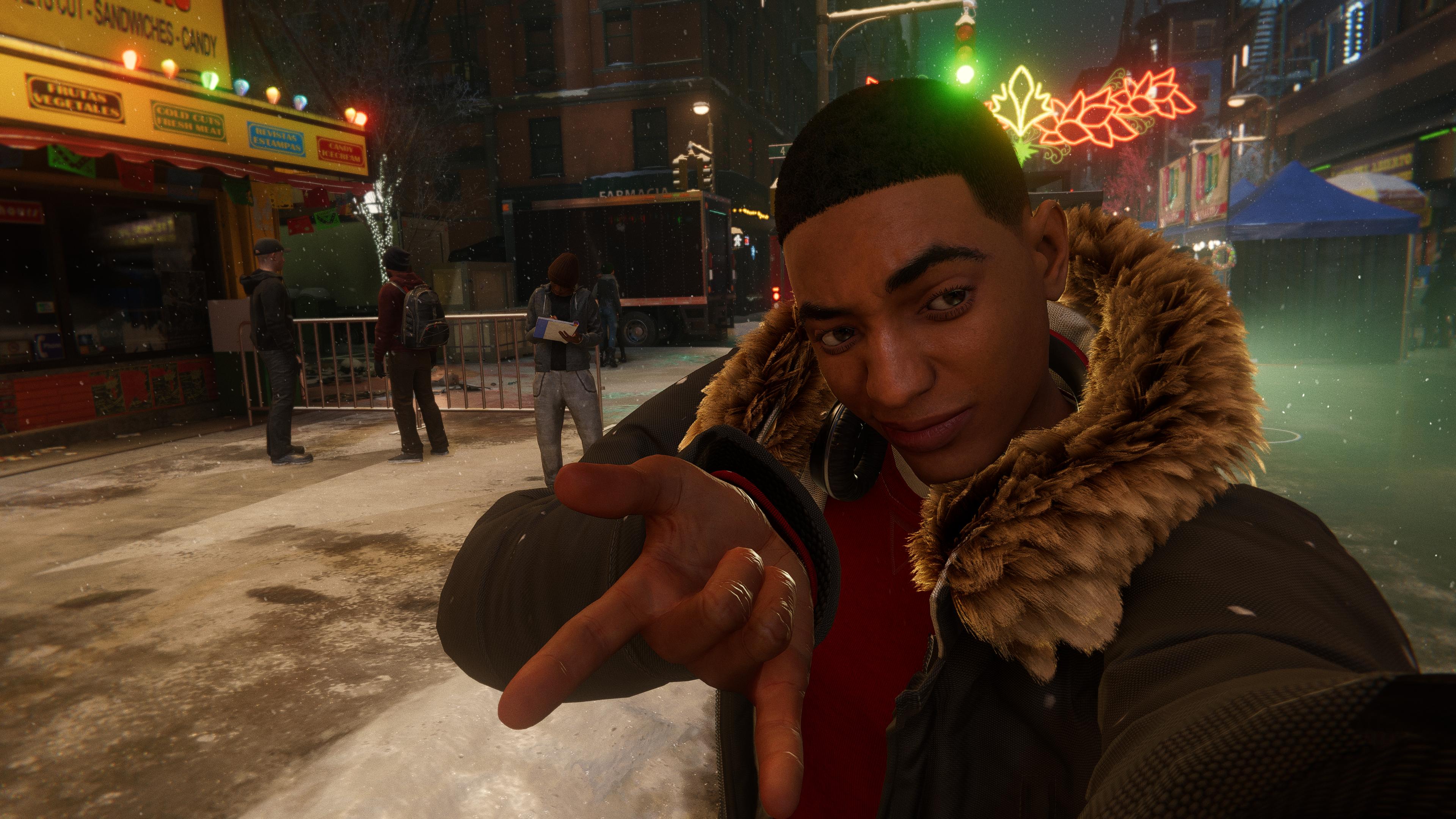 Game length for me for the main story was around 6 hrs max including doing some daily activities and finding some underground cache and upgrading a few of my gadgets and unlocking more than half of my skill tree. 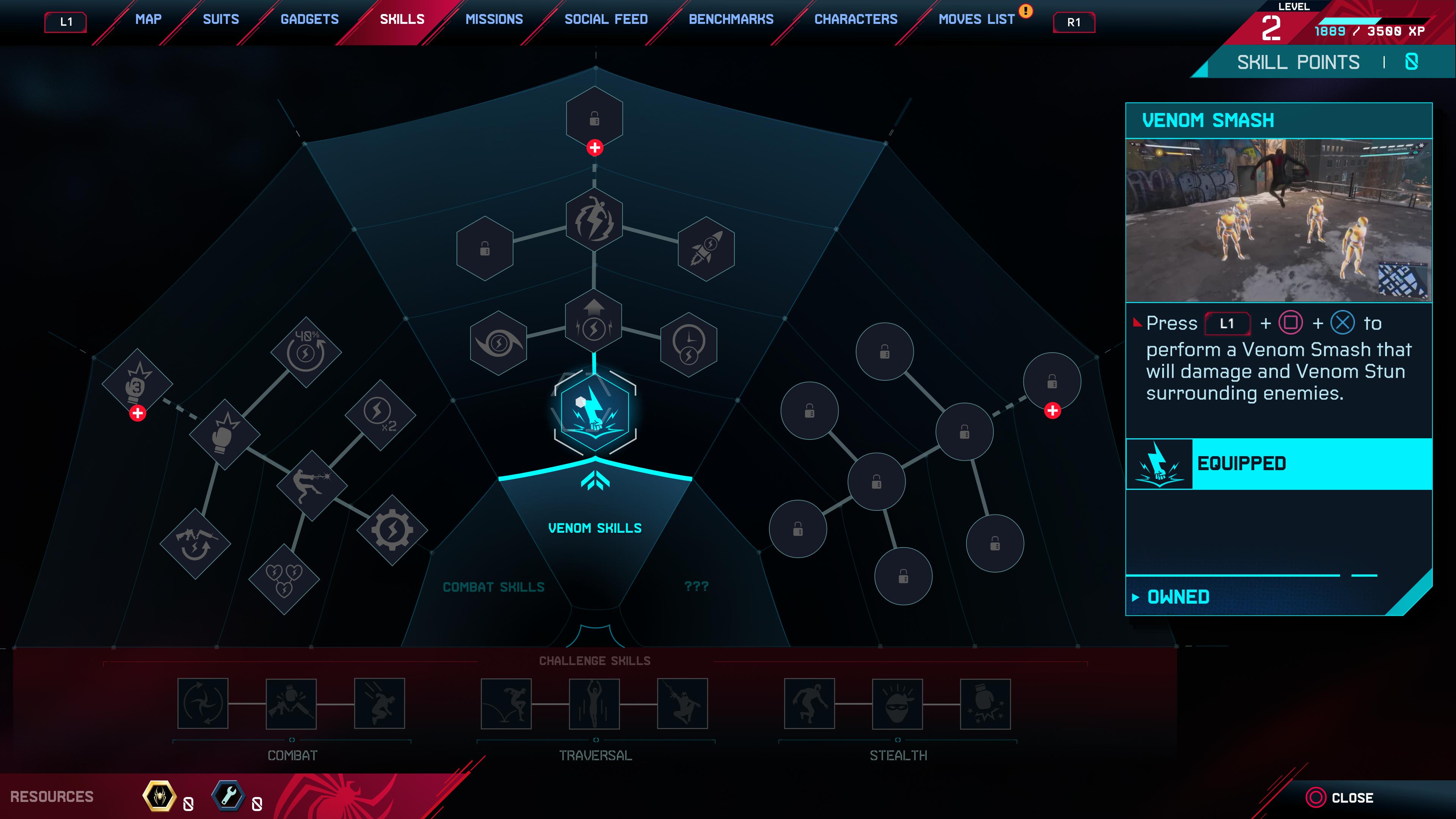 Speaking of the soundtrack, Miles Morales does a great job of describing Miles as a person and the people of Harlem as a living and lively city. His daily interaction with people in cutscenes is the best example with him having his headphones all the time resting on his neck and grooving and walking around in the neighborhood interacting with different people. You can also take selfies with select people in the streets thus adding more life to the pedestrians. 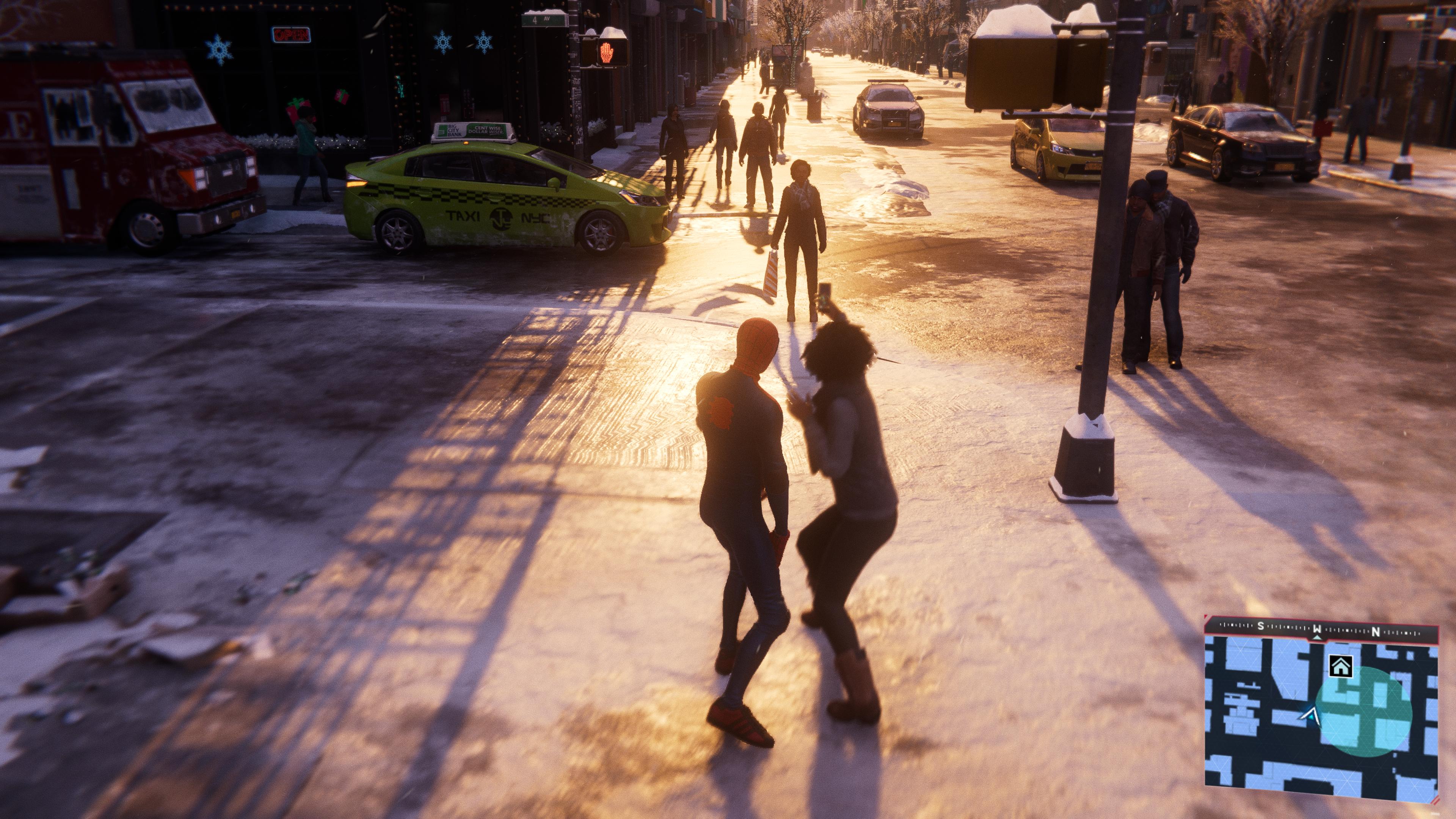 After you are done with the main game, you can replay whichever mission you want to which is another plus in my books. While fast-traveling in the metro, you will see different loading screens, one of where Miles goes full camouflage and stands still or does a random backflip near the people to make them realize that it’s the real Spider-man and not some random person wearing a costume. Things like this add a lot of heart to the game, which I feel most games out there lack.

Miles Morales is available to preorder now at 3999 INR digitally from the Playstation store and physical/Online outlets such as GamesTheShop. A PS4 copy of the game will run via backward compatibility feature on the PS5 as well for the digital edition but for the physical edition, a PS5 Disc console edition is needed to run the Physical PS4 copy. PS4 Save files will carry over to the PS5 as well on launch on November 12th, 2020.

Disclaimer: Thanks to Sony India for sending us the game code for Review

Miles Morales is a decent DLC sequel to Spider-Man (2018) in terms of performance, graphics, and a city full of people having a heart and soul making the game feel lively. But in spite of all these good things, there are a lot of plot-holes in the game which breaks the story momentum making the story feel weak and rushed with no proper origin story of its own. For the price of 3999 INR here in India, it’s difficult to recommend a game like this which ends in such a short span of 6-7 hrs. I would highly recommend waiting for a sale where you would be able to grab it for 2500-3000 INR