What do you get when you put together ambitious ideas, a small studio, and Steam early access together? Valnir Rok. Part create your own Kingdomathon and part Viking murder simulator with a dash of survival mechanics thrown in Valnir Rok is an online survival sandbox action RPG(that’s quite a mouthful) out now in early access on Steam.

The game starts off with you creating your own character with very scarce options. You don’t get to show off your creative skills and create something crazy, but at least you won’t be running into doppelgängers everywhere.

After washing up on the titular island called Valnir, naked, hungry and probably aching everywhere you start out on your path to glory. There’s a quest-line that you can follow, it does a pretty good job of easing you into the world before having you inevitably brutally murdered.

It’s a survival game, so of course, you have to take care of your hunger and thirst. The first couple of nights out, you will find yourself horribly under-equipped against the many monsters and vagrants that you will face.

The combat feels nice and meaty, and you can’t spam left click to win. The AI does a good job at giving a challenge, but it does suffer from some pathing issues. 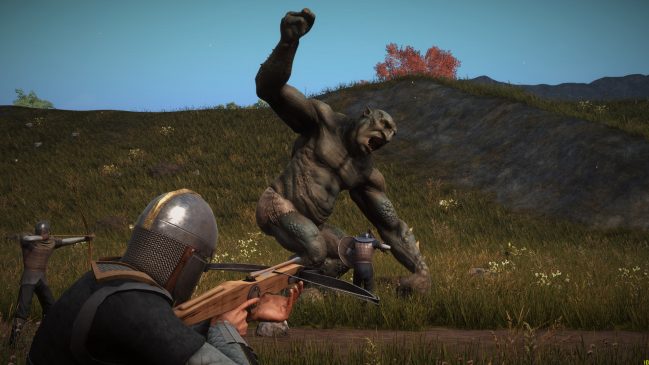 You will be going up against giant trolls, dragons and wolves and other players(if you play on a PvP server). The 16 km² map is compact but feels way too empty and repetitive. There are shrines and NPC villages scattered around, but the NPC’s feel lifeless and the structures are often empty and serve no purpose.

You can also create your own base, ranging from a simple house to even towns, castles, forts. Doing all of this on your own is going to be a pain so we highly recommend playing this with your friends. Survival games are better off with friends anyway.

We really liked the crafting system. Recipes are not automatically learned and you will have to experiment by combing different items to learn new ones.

So the gameplay is typical of any survival game, how does the game do from a technical standpoint? Unfortunately, not well.

There are typical problems that you can expect from an early access game. Textures pop up, bugs cause items to disappear and I crashed to desktop twice.

The performance is also an issue, and there are some very odd frame drops. The visuals make the game world look like it’s made of plastic, and the animations feel very wonky. The sound design is also very subpar and makes everything feel underwhelming.

We understand it’s an early access game, and making the gameplay loop better is their first priority. But the atmosphere of the game does suffer a lot due to these technical issues.

GET IT IN A SALE

To be honest, the game shows promise but it’s being flanked by some pretty hard hitting peers in a very saturated genre. Although developer Encurio is trying hard and they are a small studio, the updates are rolling in too slowly.

From a technical standpoint the game is totally unfinished, but if you can overlook the graphics and the bugs there’s fun to be had with the game. Especially if you have (or make friends), the small community is very welcoming.

If you really like vikings and norse mythology and in the market for a new survival game, we definitely recommend picking this game up on a sale.